A couple have renewed their wedding vows in isolation at home after 10 years of marriage – as their six-year-old daughter acted as the celebrant while their eight-year-old ‘cameraman’ son captured the intimate moment.

Kelly Taylor, 36, and her husband Joel, 35, from Melbourne, had booked a weekend away to celebrate their wedding anniversary on April 4 but decided to postpone to a later date due to the coronavirus pandemic.

Over the weekend, little Hannah and Coby wanted to throw their doting parents an anniversary day to remember after they saw their mother’s old wedding dress.

‘As soon as our daughter saw my wedding dress her beautiful mind kicked into action. Next thing we knew we were all getting dressed up and planning for a wedding,’ Mrs Taylor told Daily Mail Australia.

The kids turned their family living room into a wedding ceremony and the parents were told they had just five minutes to write their new vows.

Kelly Taylor, 36, and her husband Joel, 35, renewed their wedding vows after 10 years of marriage as their six-year-old daughter Hannah (centre) acted as the celebrant 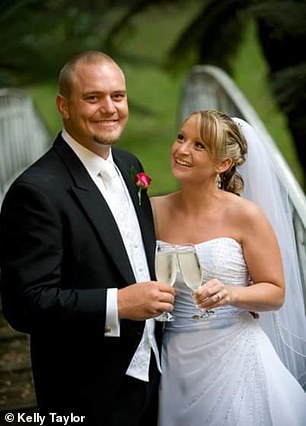 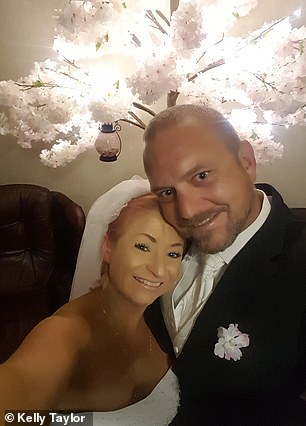 The couple had booked a weekend away to celebrate their 10-year wedding anniversary on April 4 but decided to postpone to a later date due to the coronavirus pandemic (left: pictured on their wedding day in 2010 and right: Now)

‘Our daughter informed us that she was going to be the celebrant and our son told us to leave the video to him,’ the mother said.

‘They handed us both a piece of paper and a pen each and asked us to write our new vowels. They gave us five minutes to write and then the fun begun.’

During the ceremony, celebrant Hannah said as she giggled: ‘We gather here today for Joel and Kelly’s anniversary for their wedding. They want to be married because they love each other.’

Hannah handed the vows to her parents as they restated their eternal devotion to one another as Coby filmed the vows.

‘It was so incredibly beautiful,’ Mrs Taylor said.

‘They made the whole day so incredibly special for us. We are very lucky and proud parents to have such kind, loving, caring kids.

‘Team Taylor is our everything and to celebrate our Anniversary that way, with our children taking the lead, will be a memory we cherish as a family and as parents together for the rest of our lives.’ 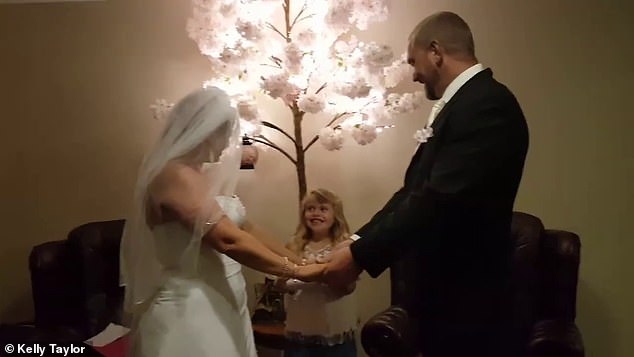 During the ceremony, celebrant Hannah said as she giggled: ‘We gather here today for Joel and Kelly’s anniversary for their wedding. They want to be married because they love each other’ 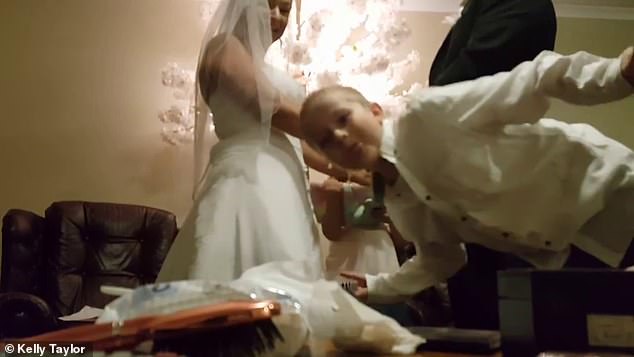 On the morning of their anniversary, the parents were ‘showered with love and cuddles’ from their adoring children.

‘Our daughter had filled our lounge room with balloons and we had toasts together throughout the day. She started asking questions about weddings and vowels and what it means to redo our vowels,’ Mrs Taylor said.

‘Joel was explaining to her what happens in a wedding when he suggested getting out our wedding video to show her so she could see. Both our kids loved the idea.

‘While we were watching I remembered seeing my wedding dress box the day before, so I asked Joel to help me get it down so we could show them.’

Mrs Taylor shared her story in The Kindness Pandemic Facebook group on April 7, which has since been ‘liked’ more than 16,000 times.

The couple have been married for 10 years after ‘so many incredible adventures together, both positives and negatives’.

‘We are very proud of our journey together but also understand that marriage is two souls sharing their time together as one, as best friends and lovers,’ Mrs Taylor said.

‘We acknowledge that compared to many, our time travelled together is just the beginning and to others enough time has past that 10 years of knowledge is valuable.’ 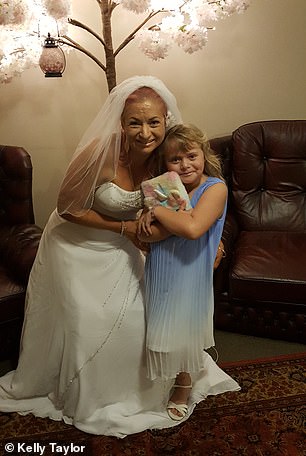 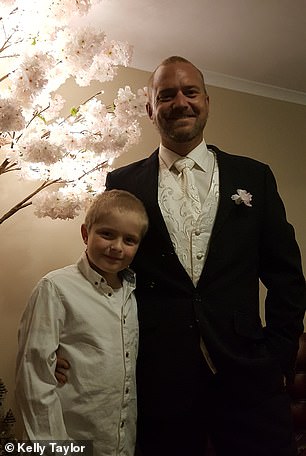 Happy anniversary! The parents posing with their two adorable children after they showered their parents with ‘love and cuddles’

They believe the secret to their long, lasting marriage is communication.

‘A few things that we work on and continue to develop as a couple is communication, we never put each other down – if we are having a disagreement we discuss the issue, not have personal digs,’ Mrs Taylor said.

‘We always apologise after an argument and “agree to disagree” if we have to but we always apologise for the other person’s feelings being hurt and acknowledge emotions and try to explain triggers to each other.

‘We have loved each other through thick and thin and it grows each day with each new experience, both as a couple and as parents.

‘I think in 10 years time we will look back to this moment as we do now our wedding day and think “if only we knew then what we know now”.’