Thousands of punters have let their hair down as Australia’s biggest racing carnival gets underway.

Melburnians donned their best black and white frocks and suits to pack Flemington Racecourse for Derby Day, the first day of the Melbourne Cup Carnival.

Sydneysiders took advantage of the glorious sunshine as they glammed up and flocked to Rosehill Gardens for Golden Eagle Day.

The champagne and beer were flowing at both tracks, where punters were in high spirits with plans to continue celebrations well into the night.

It was the biggest Derby Day crowd since 2019 with most racegoers locked out of Flemington for the last two years due to Covid-19 restrictions.

Most Flemington attendees obliged with the traditional black and white Derby Day dress code, where not even a late afternoon downpour could dampen their high spirits.

But not every one was their best behaviour with security staff and police escorting racegoers from the venue.

Off and racing: The sun was shining early on Saturday as Derby Day crowds flocked to Flemington 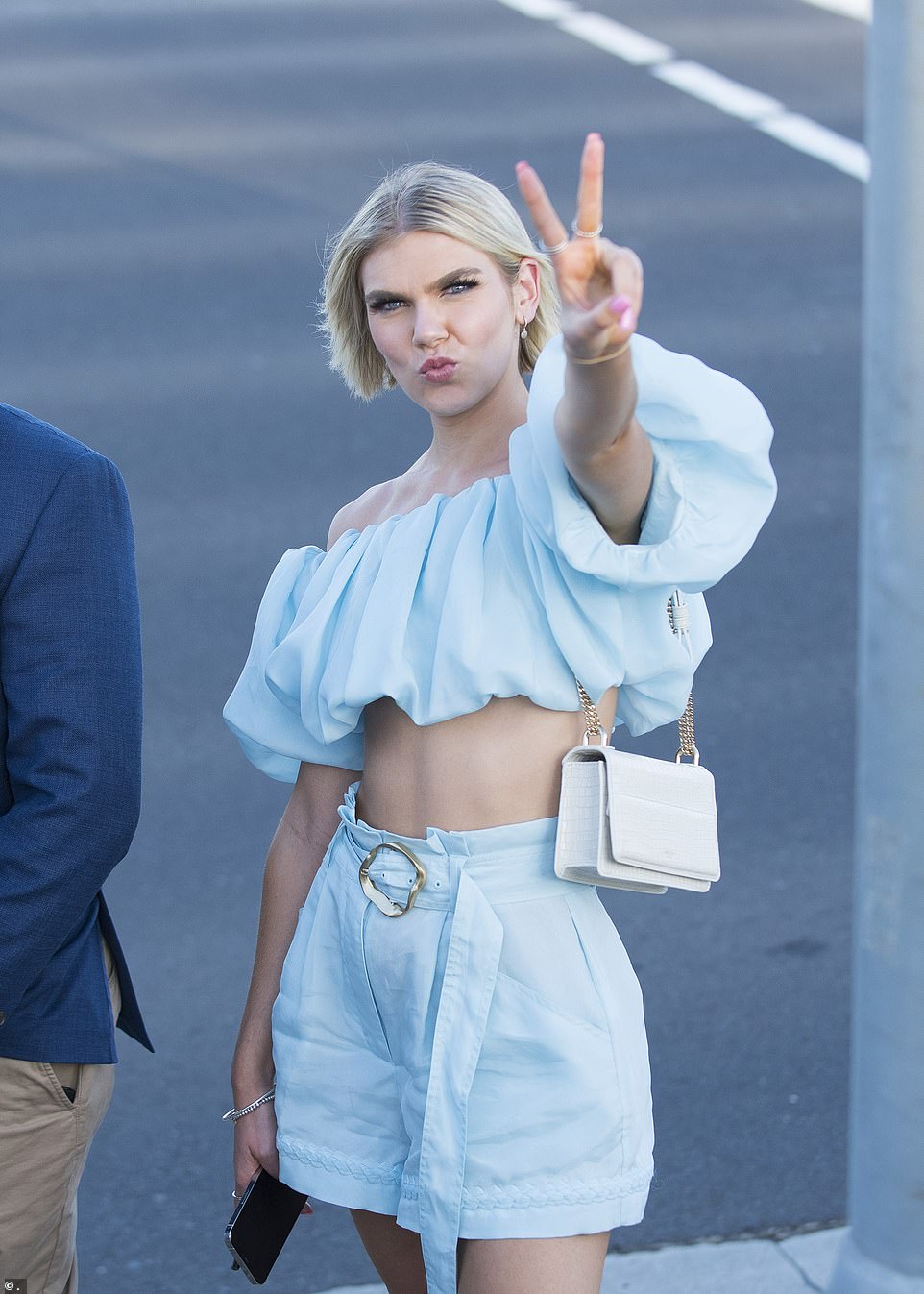 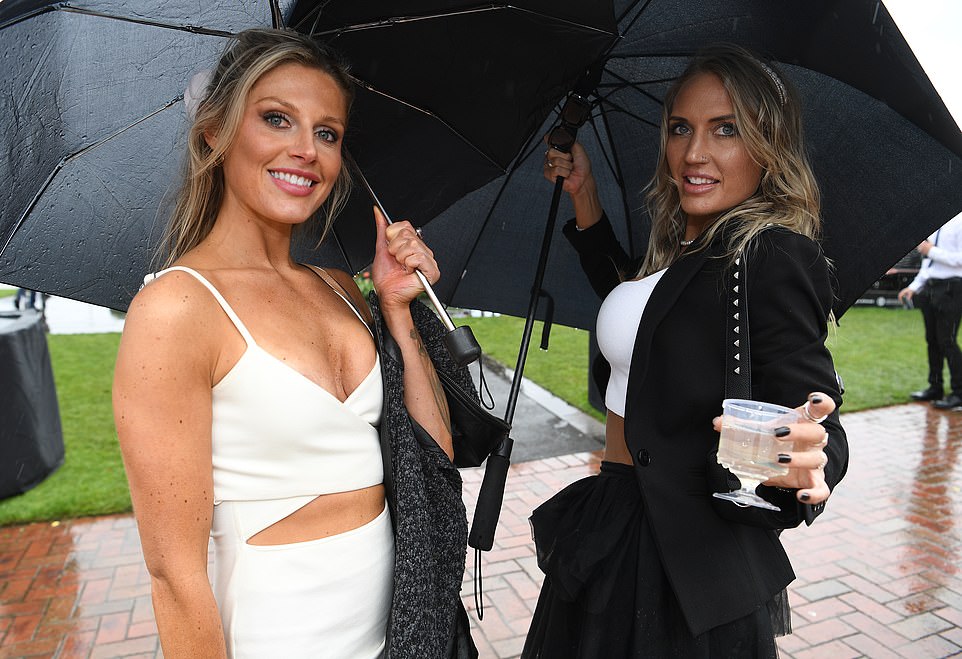 No rain on our parade: An afternoon downpour didn’t dampen the spirits of these ladies who came prepared for wet weather 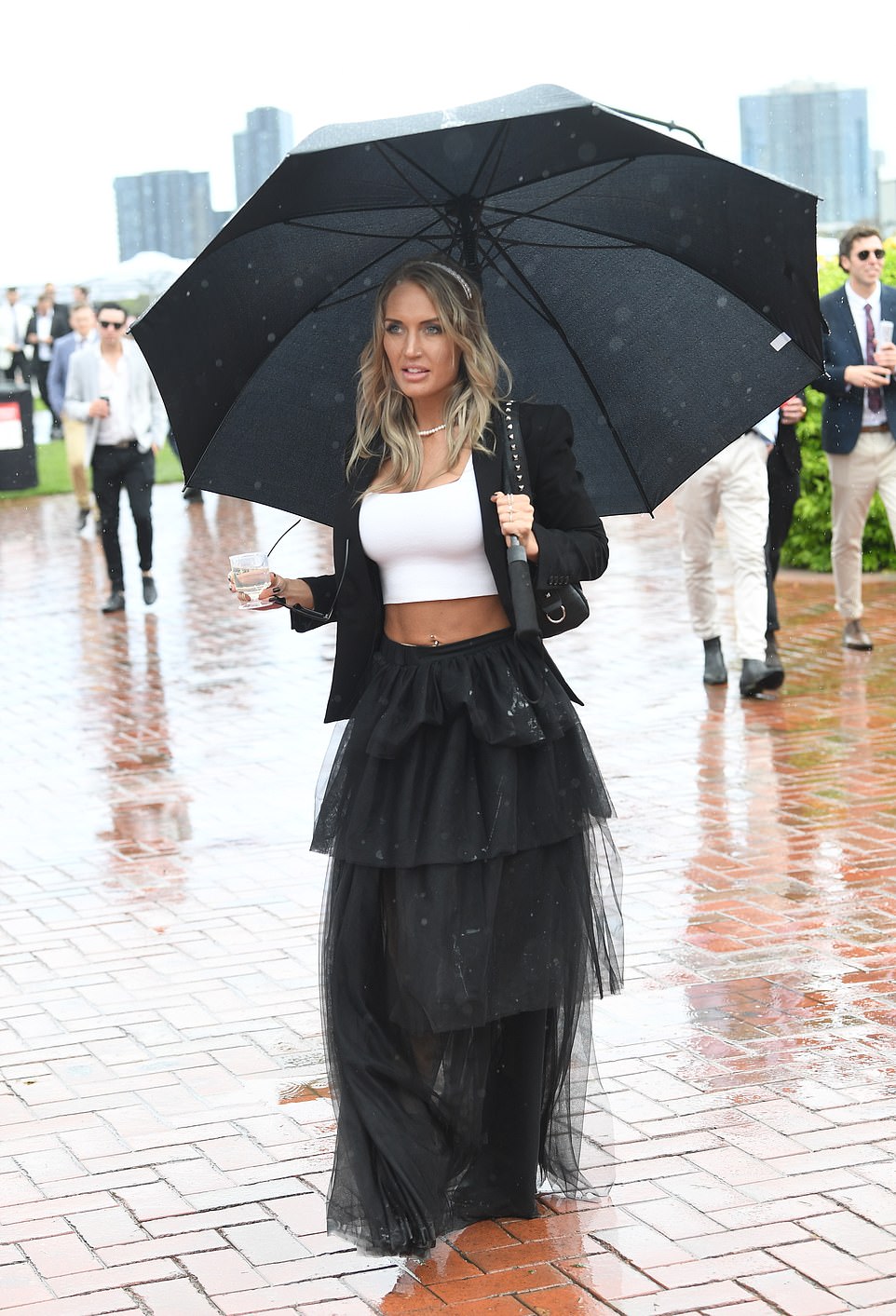 Ducking for cover: This young lady needed  an umbrella to keep her outfit dry 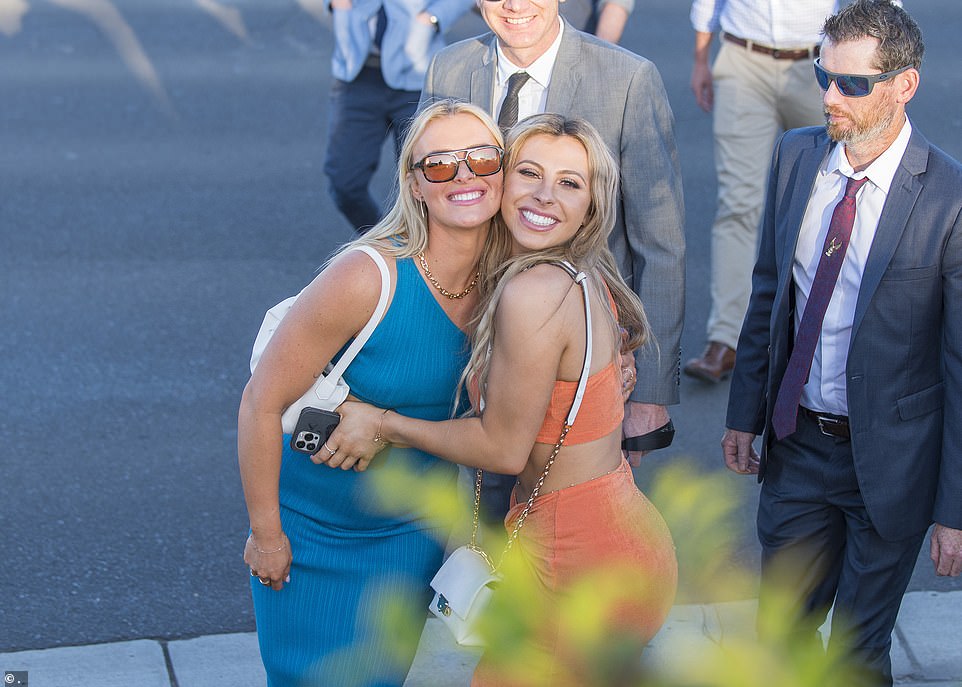 Say cheese: Racegoers were in high spirits as they enjoyed the Sydney sunshine on Golden Eagle Day 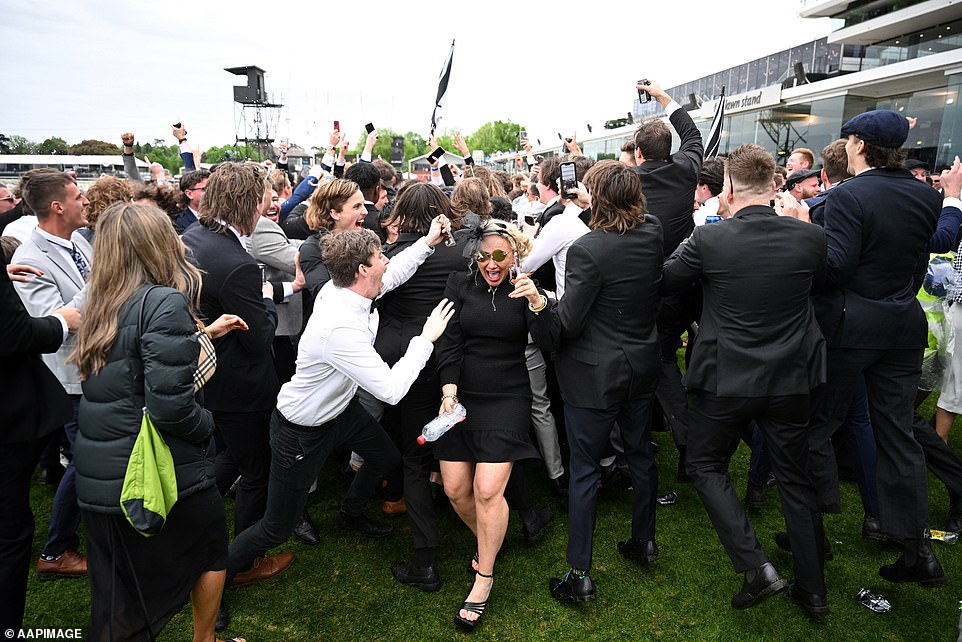 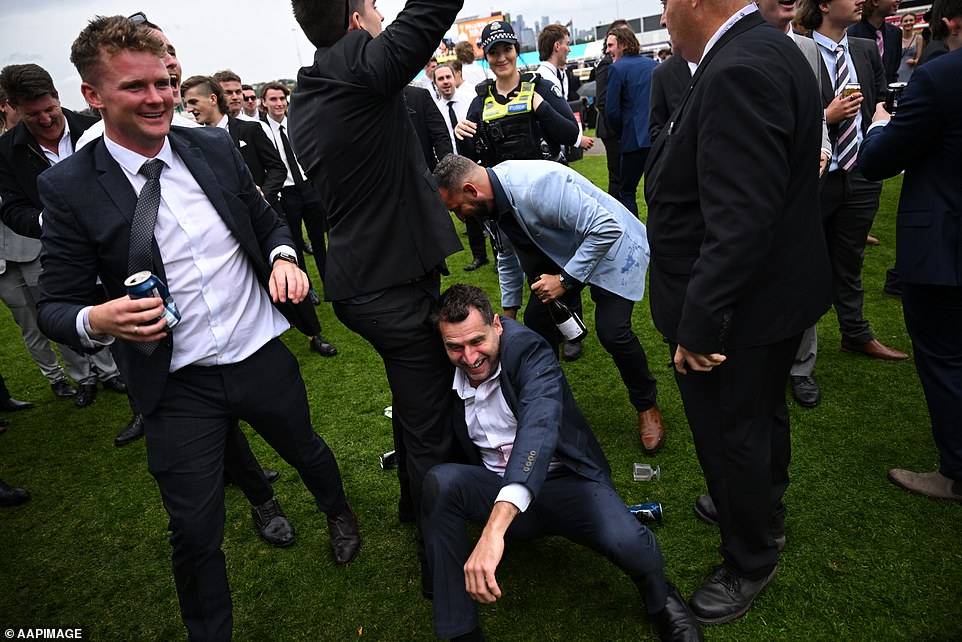 Out in force: A policewoman watches on to ensure  Derby Day celebrations don’t get out of hand 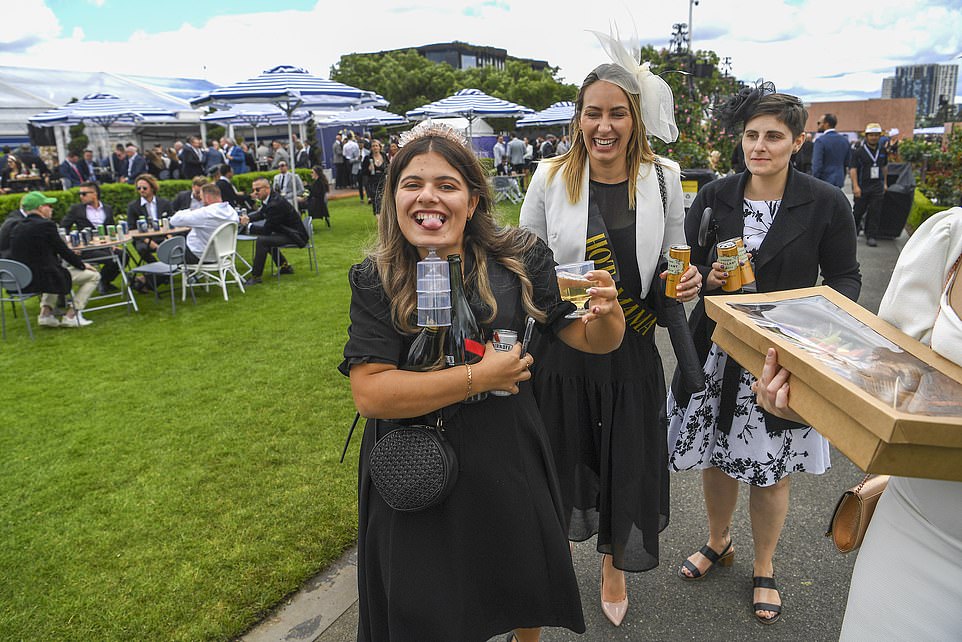 Sparking form: This Derby Day punter clutching a bottle of champagne was keen to get to post-race party started 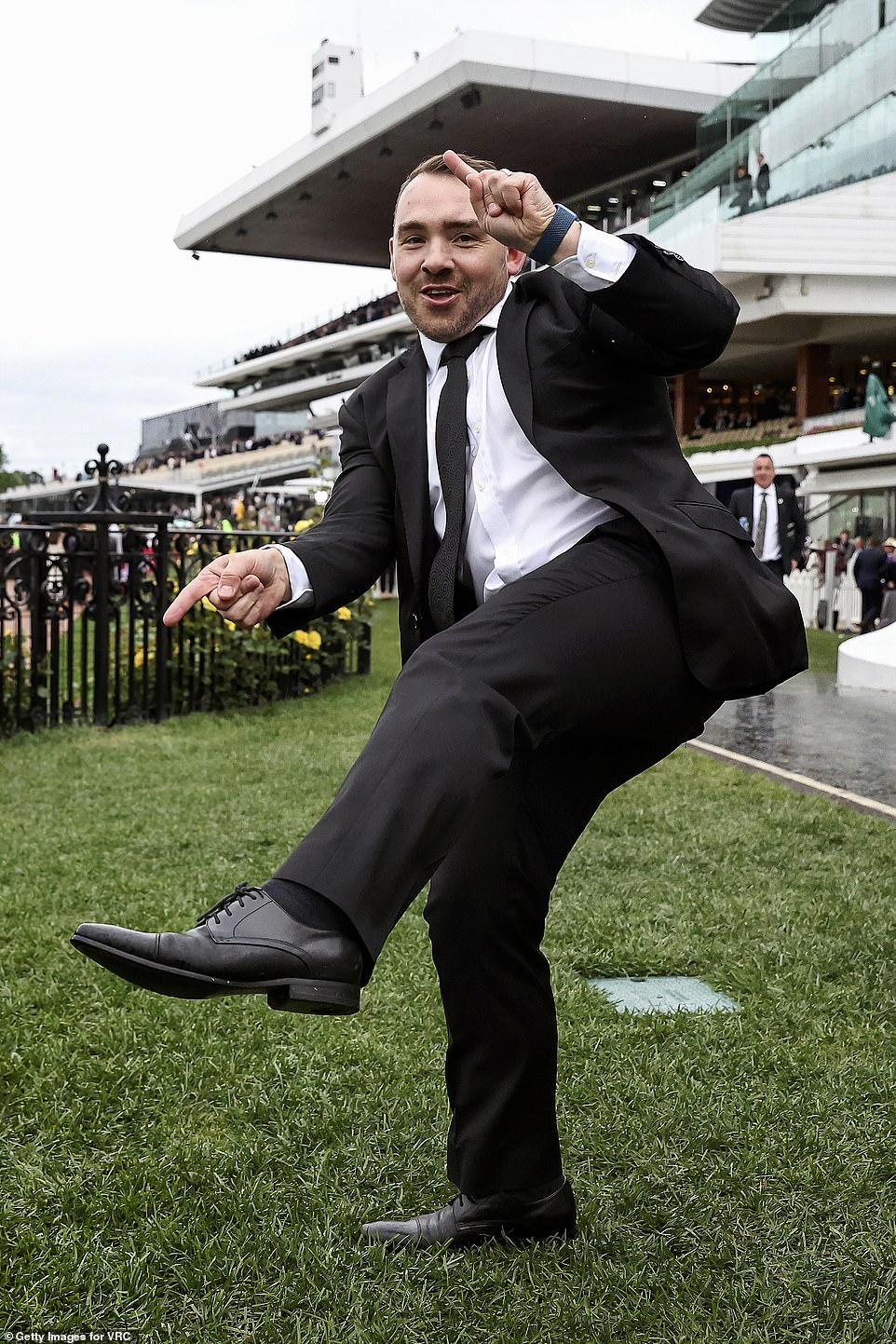 Kicking up his heels:  This man was keen to show off his dance moves on the Members Lawn at Flemington 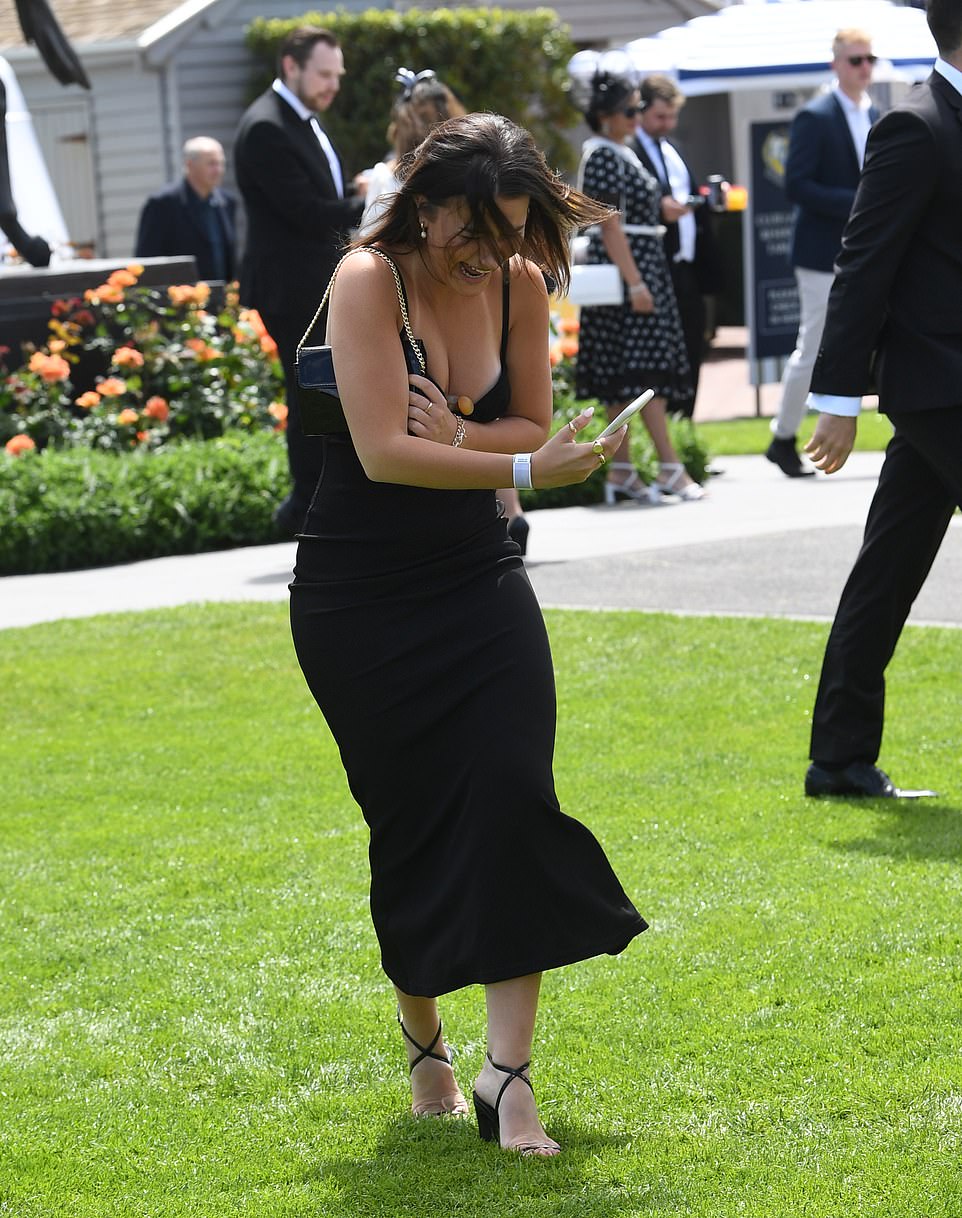 Glad to be back: This racegoer was happy to back at Flemington for Derby Day

Many Flemington racegoers came prepared with umbrellas while others were more than happy to soak up the drenching and danced in the rain.

By then, some ladies were barefoot after a long day in high heels with some footwear unrepairable.

Flemington racegoers were joined at the track by a host of high profile celebrities, led by

Many punters will do it all again in three days time when 100,000 Melbourne Cup racegoers pack Flemington on Tuesday for the race that stops the nation.

It will be the first time in three years the track will host a capacity crowd on Melbourne Cup Day due to Covid restrictions.

There were no crowd in 2020 and only 10,000 double-vaccinated racegoers were permitted last year.

Meanwhile on the track, Manzoice won the time-honoured $2million Victoria Derby on Saturday after a stunning final furlong.

It almost never happened as Manzoice struggled for form in a Derby build-up, plagued by poor barriers and waterlogged tracks in Sydney. 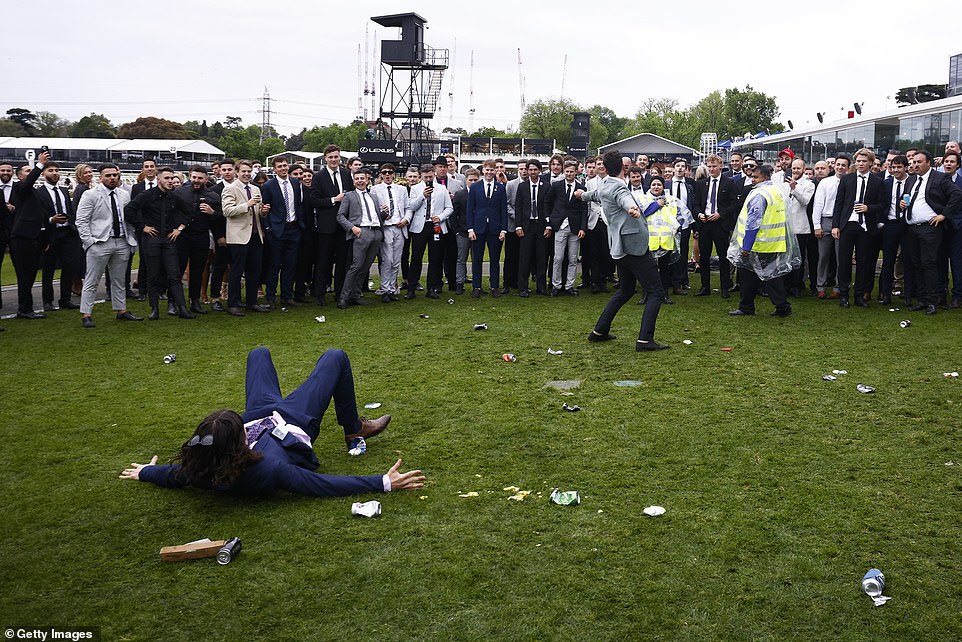 Saturday siesta: One Derby Day reveller needed a mid-afternoon nap at the track 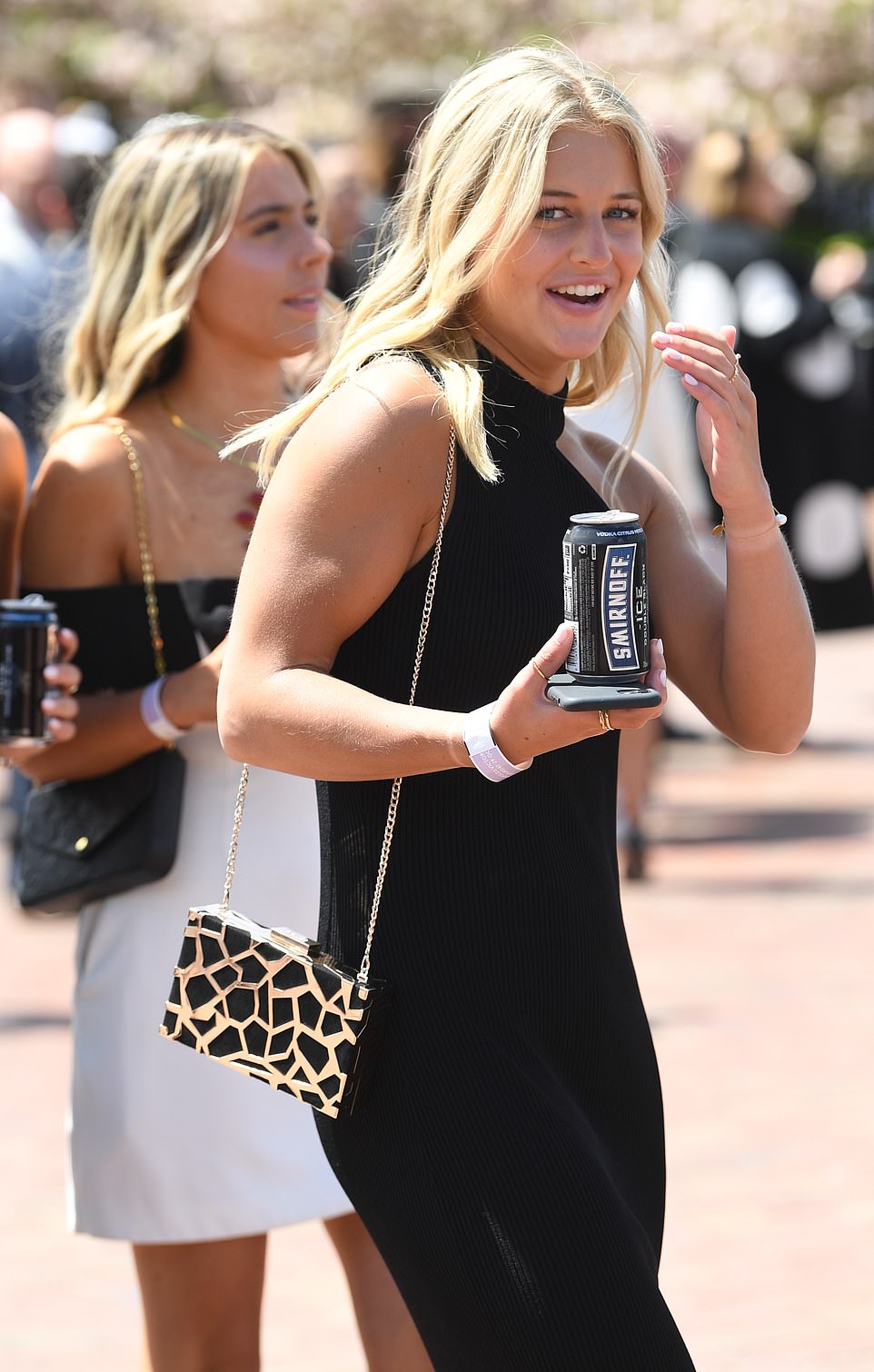 Dressed to impress: Black and white is the traditional dress code on Derby Day at Flemington 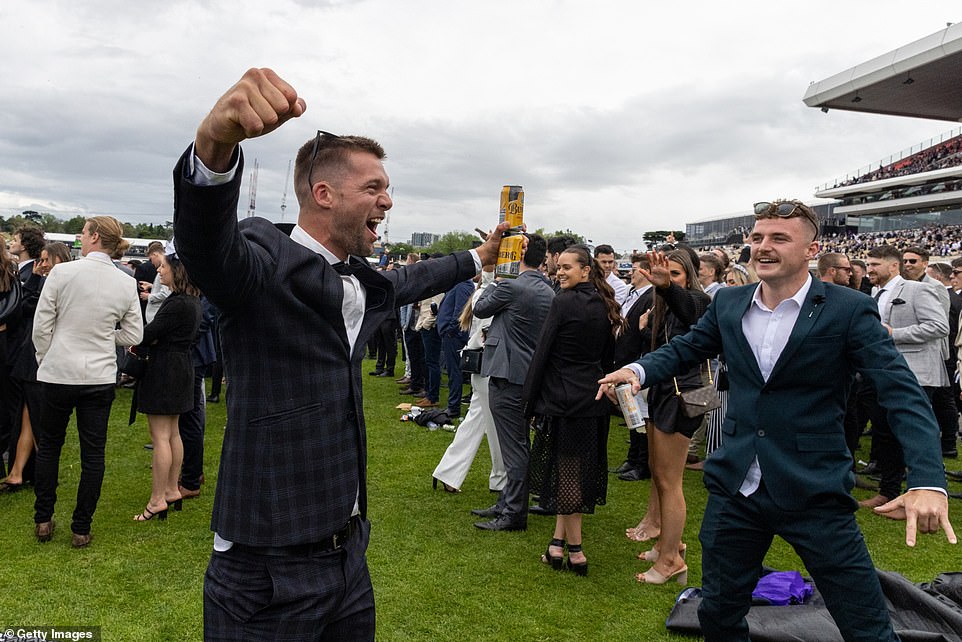 Winners are grinners: This happy punter was keen to celebrate with his mate after backing a race winner at Flemington 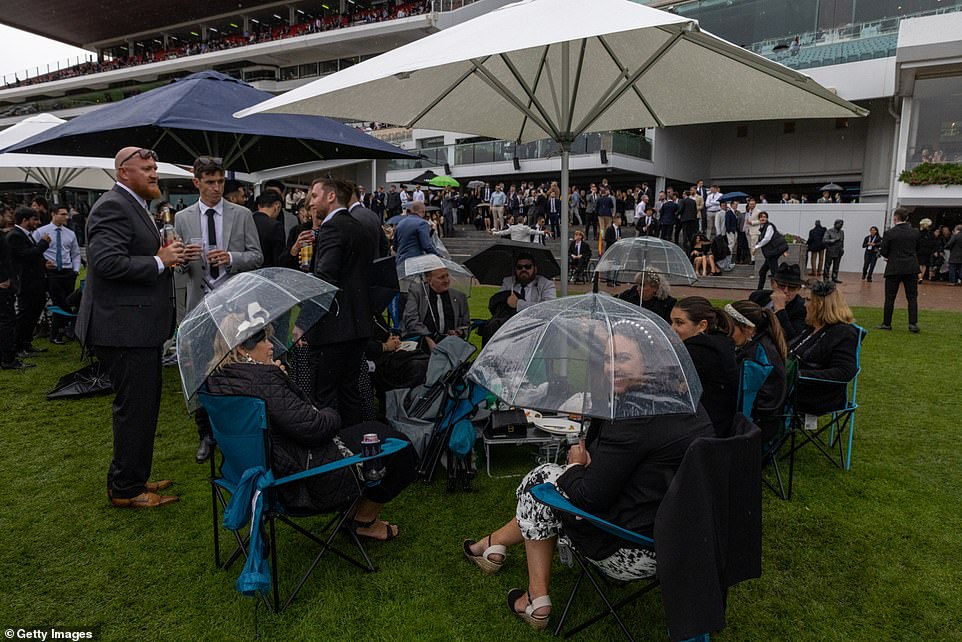 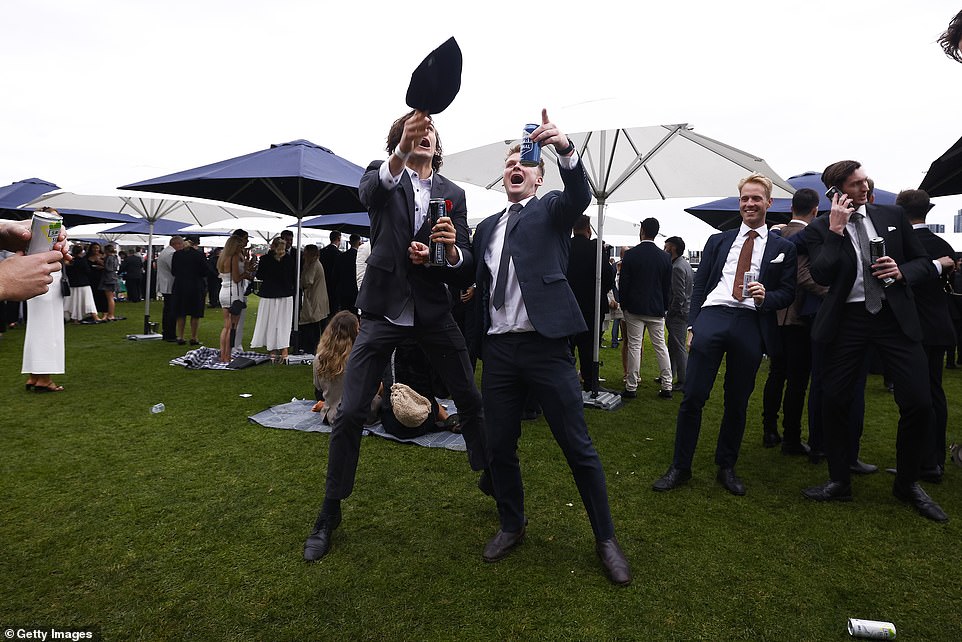 Boys will be boys: While some punters wanted to sit back and rest their feet, the party was only just getting started for others 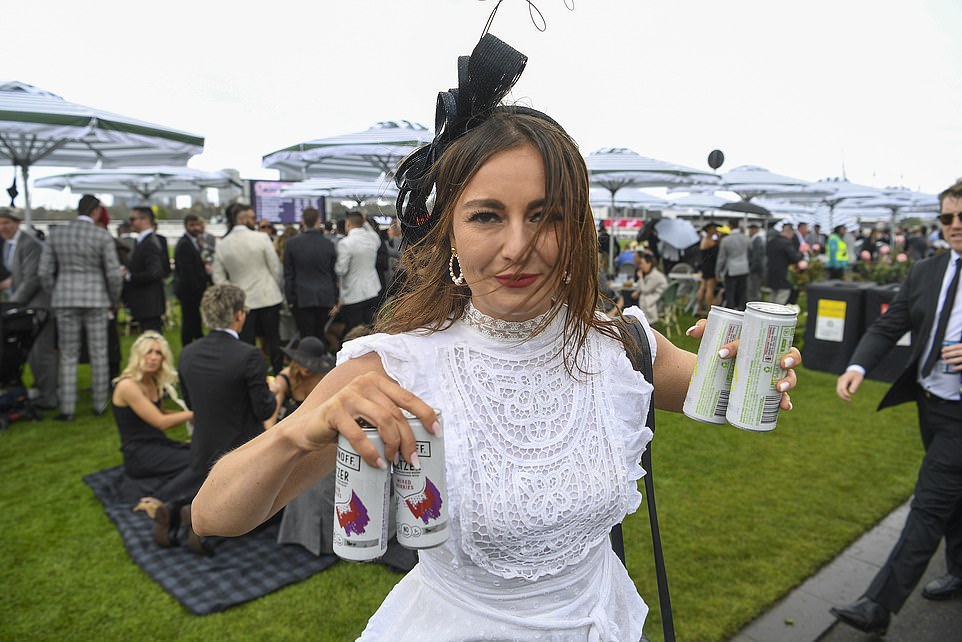 Thirsty work: This Derby Day punter had her hands full coming back from the bar

With the well-backed Sharp ‘n’ Smart seeming to have the Derby sewn up, Dee ran down the favourite in the shadows of the post to win by a head, with huge outsider Aberfeldie Boy finishing in third at the whopping place price of $15.

It was a stunning finish to the race that looked to be yet another Group 1 winner for Australia’s top jockey James McDonald – but Dee was confident in the way his mount would run through the line.

‘If you said to me before this Spring that I would have won two major Group 1 races, I would probably laugh. It is pretty surreal, and hopefully it can continue,’ a beaming Dee said on the Channel 10 broadcast after the race.

‘Thankfully they had a decent tempo up front but gradually he was able to build, to lengthen, to quicken all the way down the street. His stamina really came into it, just as the others were feeling the pinch. He was able to let it down.

Waller is celebrating his second Victoria Derby success and he revisited his first win in the race to put the finishing touches to Manzoice’s campaign.

The champion trainer employed the same gear change – a set of side winkers – he used on Preferment to bring out the best in his latest winner.

While Sydneysiders won’t get the public holiday this Tuesday, they can still enjoy the racing action at Royal Randwick and then back at Rosehill next Saturday. 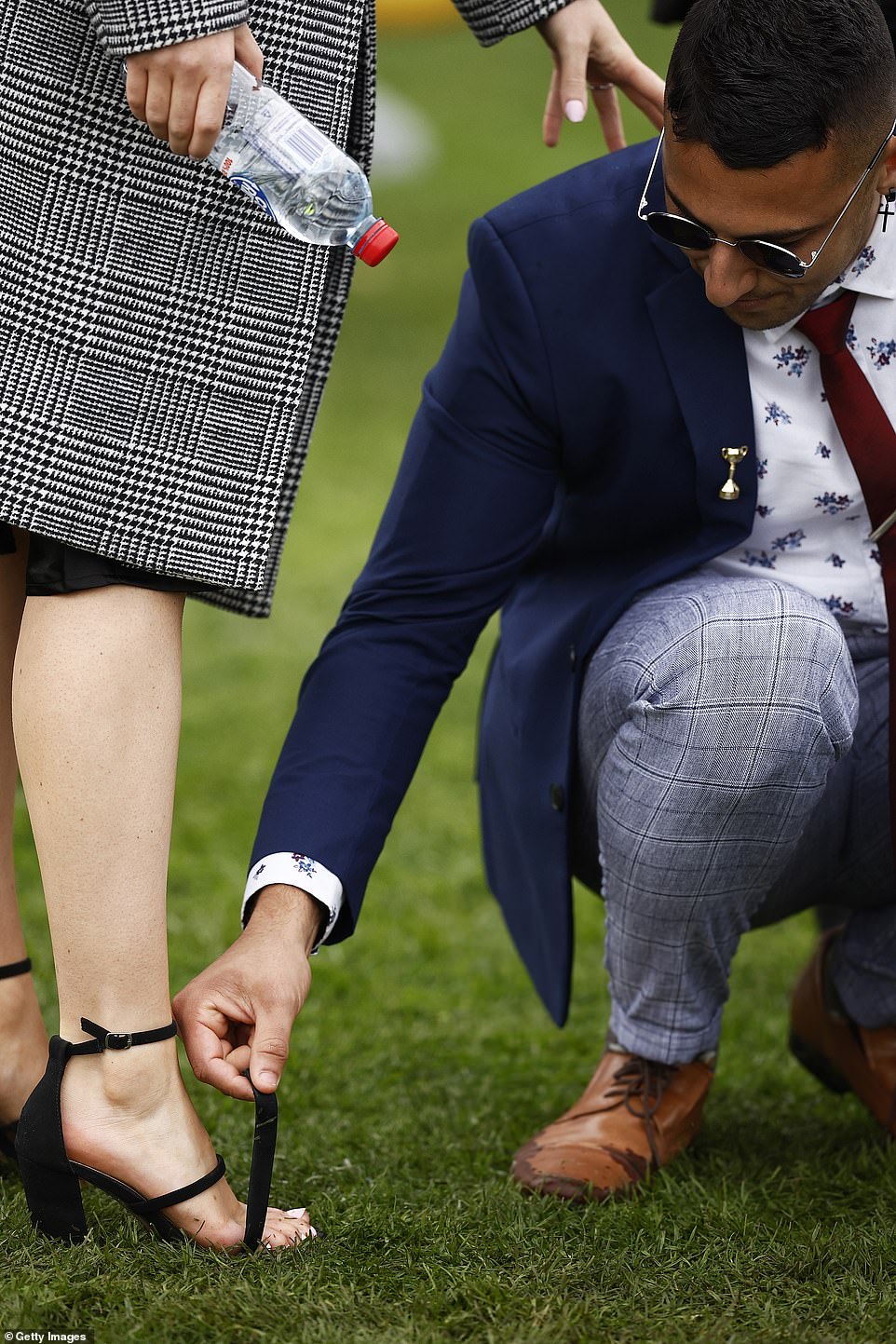 Need a hand?: This kind gentleman rushed to the aid of a female friend to her fix broken heel 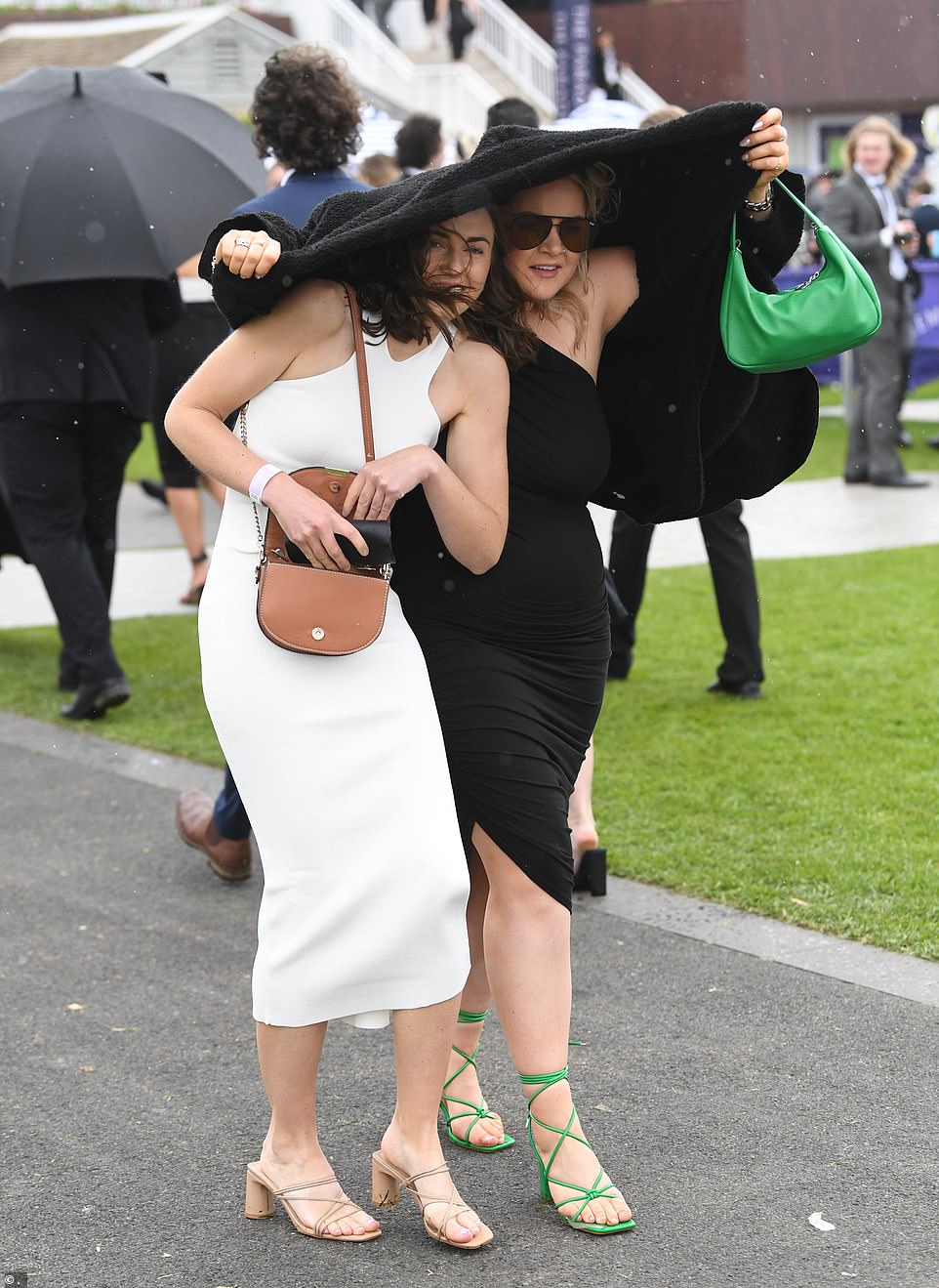 Seeking shelter: These racegoers used a coat to stay dry as they raced for cover from the rain 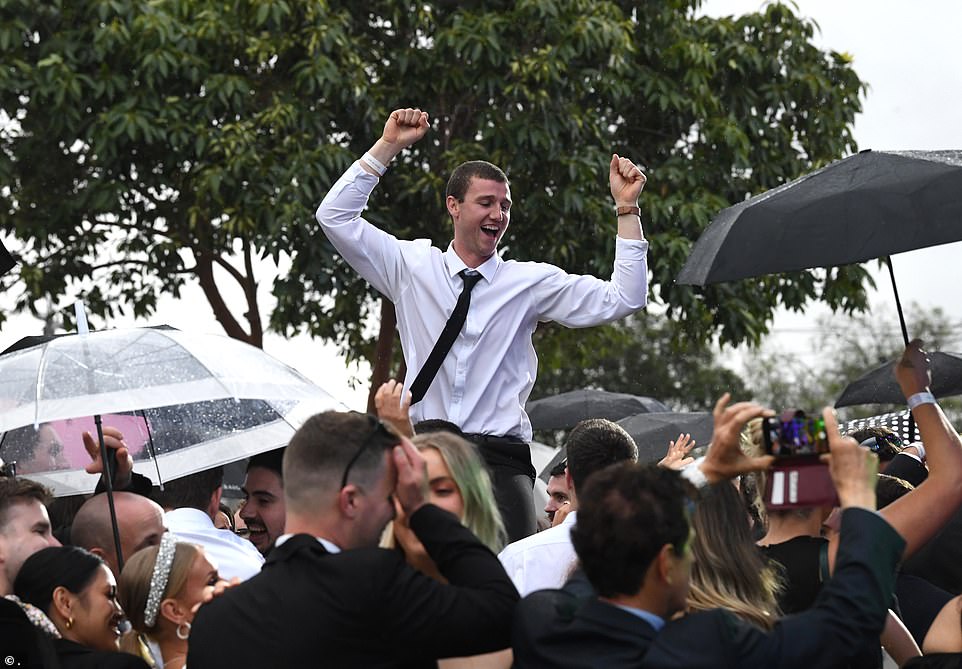 Lift me up: This punter had a great view of Derby Day celebrations with some help from a friend 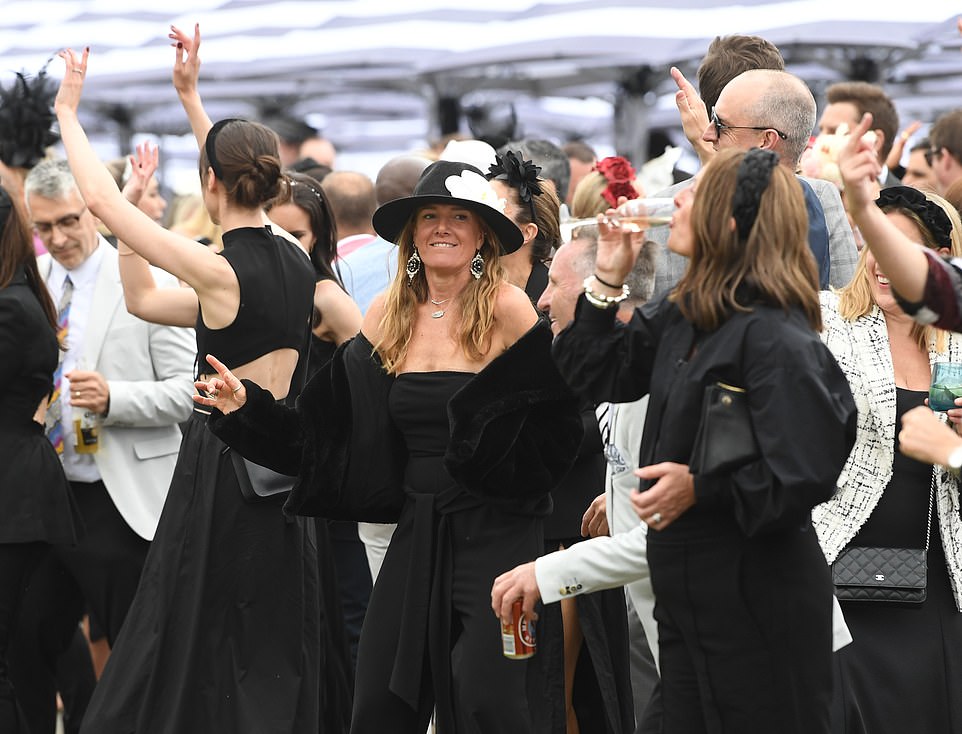 It’s party time: Many punters enjoyed a trackside boogie in between races at Flemington 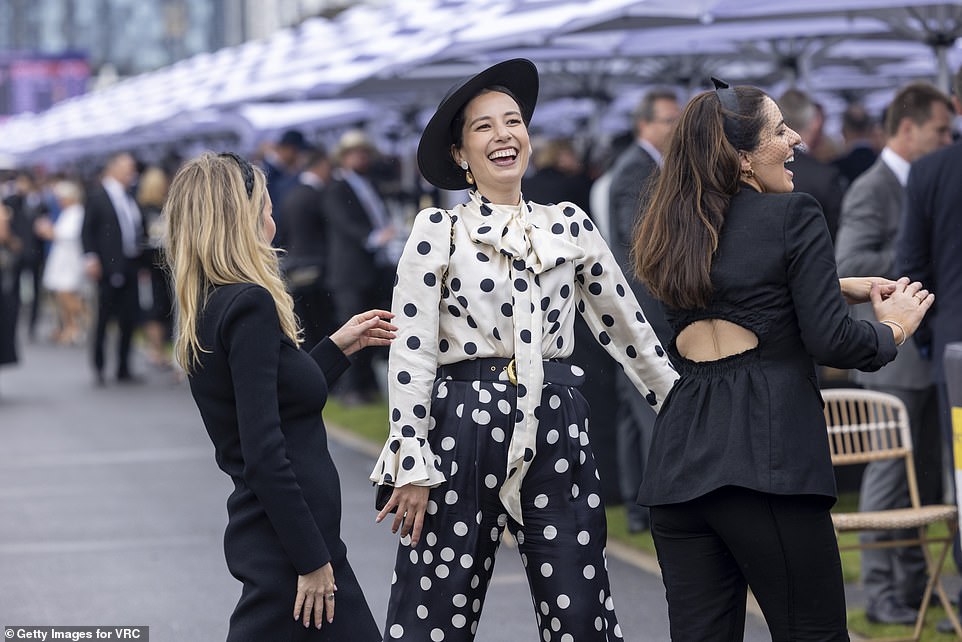 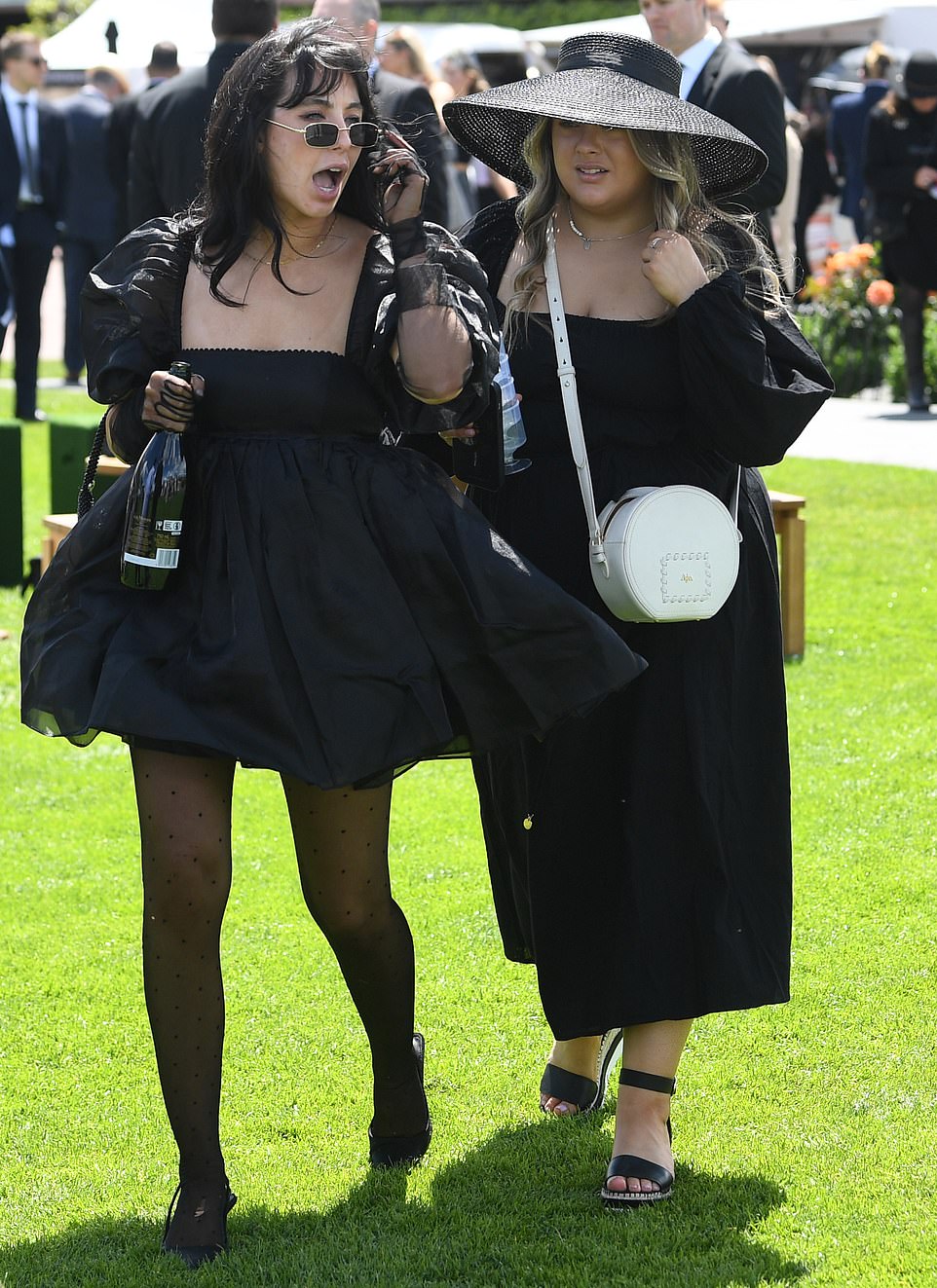 Party time: These ladies were ready to kick off festivities with a bottle of champagne 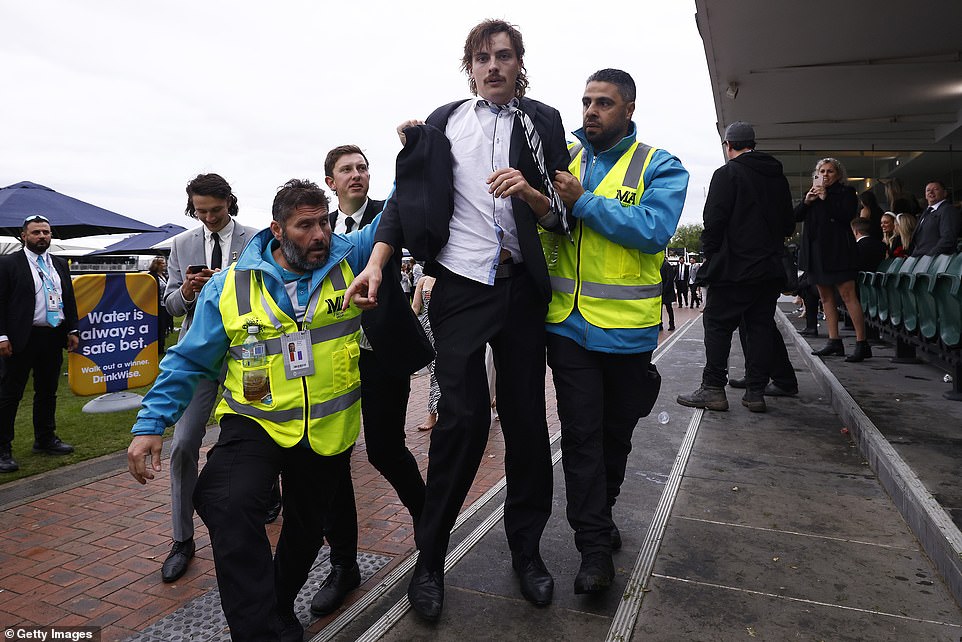 Time to go home: Derby Day celebrations got out of hand for several punters who needed an early night 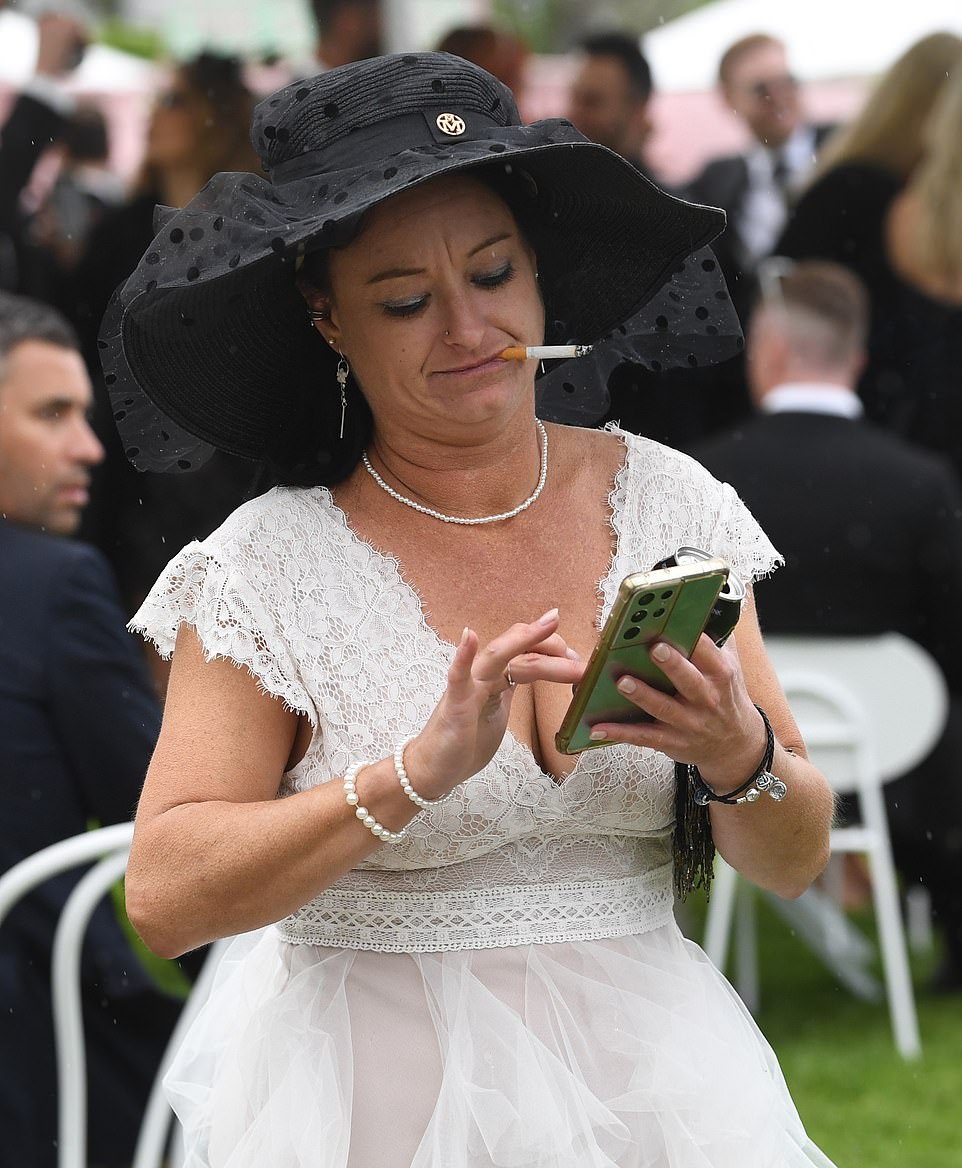 Right in white: This woman takes a cigarette break as she checks her phone 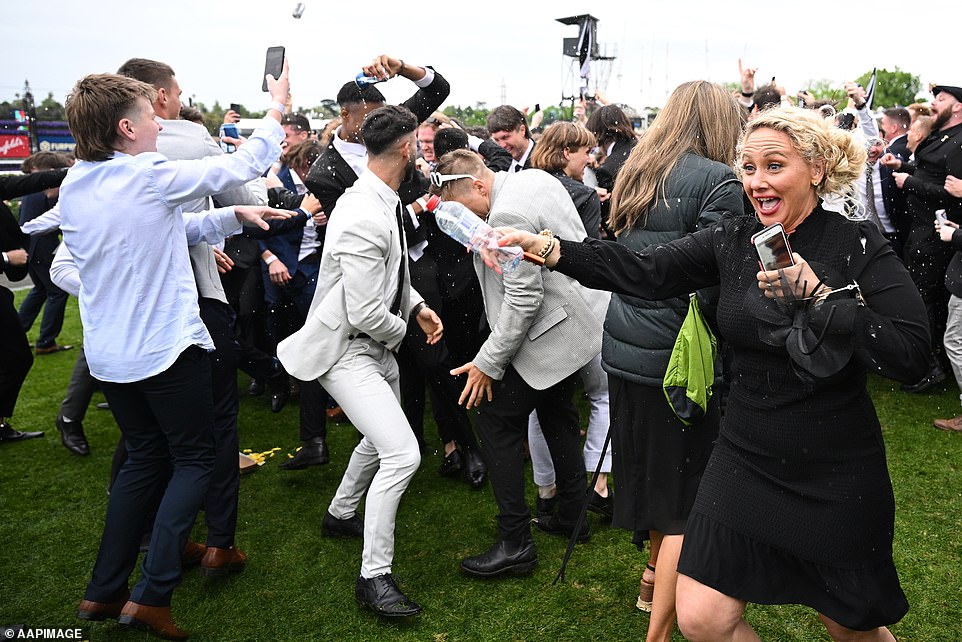 Letting their hair down: Revellers were in high spirits by late Saturday afternoon