Public health workers have been sent door-to-door in Melbourne’s hotspot suburbs without being given protective masks, a shocking video has revealed.

Hundreds of doorknockers this week hit the streets of 36 suburbs across the city to hand out information and assess people for potential flu-like symptoms.

Victoria is currently experiencing a second wave of COVID-19 and 10 postcodes were this week returned to strict lockdown by premier Daniel Andrews.

Mr Andrews also ordered a door-to-door testing blitz in a bid to limit the outbreak.

But shocking video filmed by one local shows doorknockers revealing they are yet to receive protective masks, despite coming face-to-face with up to 4,000 people each day.

Public health workers have been sent door-to-door in Melbourne’s hotspot suburbs without being given protective masks, a shocking video has revealed

The footage shows a Melbourne couple driving past a street corner where two dozen health workers are standing around.

‘What are you doing?’ the woman can be heard asking one worker.

‘We are collecting the information regarding COVID-19,’ replies the man, showing off his COVID-19 Public Health staff badge.

‘The Victorian Government wants us to let them know what are the conditions of the people, what are the symptoms people are having and encouraging them to get the test,’ his colleague then said.

As the couple continue driving through the suburb they come across another group of health care workers.

‘Excuse me, can you tell me where your mask is? Why are you not wearing a mask?’ the man asks.

‘We don’t have any masks,’ the health worker admits. 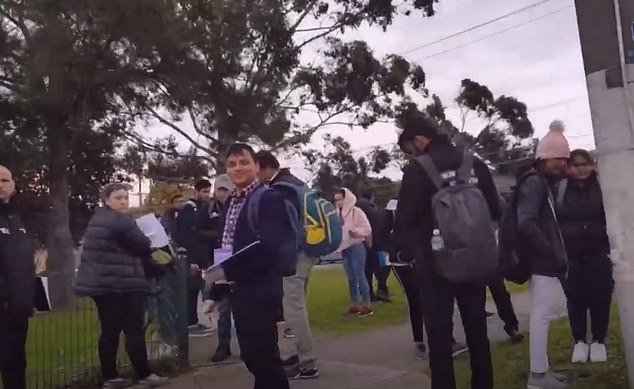 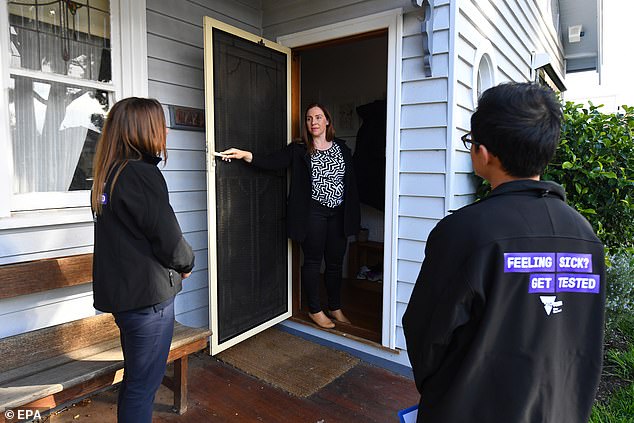 Close to 30,000 tests are being carried out across Victoria every day, with the government desperate to stamp out the risk of the outbreak spreading beyond Melbourne (pictured)

‘Did the government not give them to you?’ the man asks again.

‘Yeah, we didn’t receive (a mask) but I hope from tomorrow onwards we’ll get them,’ the health worker said.

There are three levels of teams being sent onto the streets of Melbourne – community engagement teams, doorknocking teams and qualified health teams, who administer the swabs.

In a statement to Daily Mail Australia, a spokesperson for the Victorian Department of Health and Human Services said only those ‘collecting swabs are required to wear PPE’.

‘All staff working on our Suburban Testing Blitz are given a safety pre-brief ahead of their shift – including instructions on physical distancing and hand washing, as well as given access to hand sanitiser,’ the spokesperson said.

‘Only those involved directly with collecting swabs are required to wear PPE. They are provided with masks, gloves and gowns to keep them safe and follow strict safety protocols when in contact with residents.’

Premier Andrews this week said the state was on a ‘knife’s edge’ amid reports many people in the hotspot suburbs were refusing to get tested.

The Labor leader said he believes many were knocking back tests because they fear being forced to take time off from work and being left in a financial difficulty.

‘If someone knocks on your door and says “I’ve got a test kit for you”, your only answer should be yes,’ Mr Andrews told The Project.

‘I think you have to understand why that is the answer.

‘I think there might be some people that don’t have access to pay, whether it be sick pay or holiday pay.

‘Their economic circumstances might be very uncertain and the notion of having two days away from work while you wait for your test result may be a big challenge.

‘That is why we’ve put in place essentially a no questions asked hardship payment, a $1500 payment to deal with that perhaps as a disincentive to getting tested.’ 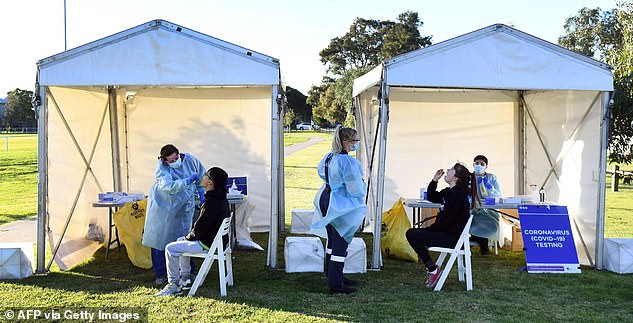