A Melbourne sex worker and fraudster masqueraded as a woman on a dating app to lure an unsuspecting victim to his home on Christmas Day before sexually assaulting him.

The 44-year-old posed as a brunette on dating app Skout and discussed fantasies with the 21-year-old in the lead-up to the assault.

Valsamakis, who worked in the sex industry, convinced the victim to come over and cover his face with a blindfold before going into the house as part of the ‘fantasy’.

A Melbourne sex worker, 44, had admitted to pretending to be a woman to lure a man into his home for sex (stock image)

The victim had a sex act performed on him but became suspicious and took off his face covering.

‘Are you f***ing serious,’ he yelled once he realised what happened.

The victim punched Valsamakis in the ribs but fled outside after his abuser grabbed a pot plant and chased him.

‘What does he expect is going to happen when this man discovers it’s not a woman he’s seen photos of,’ Victorian County Court Judge Patricia Riddell said.

‘It beggars belief, what does (Valsamakis) expect the reaction is going to be.’

The sexual fraudster initially claimed to police the victim knew he was a man but ‘wanted to pretend’ Valsamakis was a woman.

When police raided his home they also found Viagra that he did not have a prescription for. 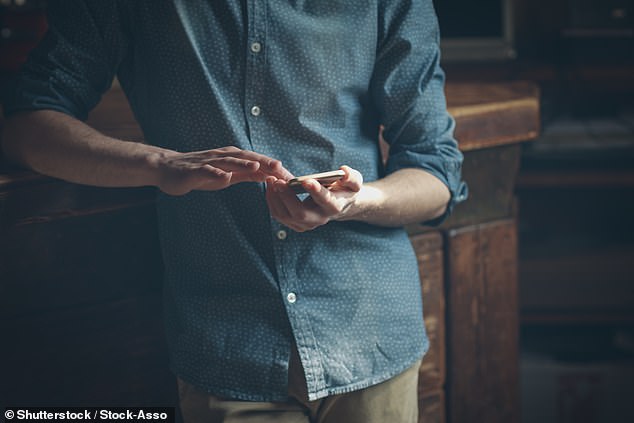 The judge said Valsamakis was ‘masquerading as a woman’ and had taken deliberate steps to appear as such including sending nude photos of women.

He had previously been sentenced for similar offending in February of that year.

But his lawyer argued he had a complex and traumatic background, was ‘profoundly ashamed’ of his behaviour, had a ‘severe’ psychosexual traits and suffered from a depressive disorder.

Valsamakis will be sentenced at the end of the month on charges of rape by compelling sexual penetration and also possessing a schedule 4 poison for the Viagra.