Two teenage girls with albinism have revealed how they’ve become best friends – and have gained confidence thanks to their love of fashion.

Lucy Carpenter, 14, and Sammy McCombe, 13, from Melbourne, who both have a rare form of albinism, first met as babies, after their mothers met at a support event.

The teenagers explained how they have become firm friends, as they both understand what it’s like to have the condition.

Lucy Carpenter, 14, (right) and Sammy McCombe, 13, (left) from Melbourne, (pictured modelling in a photoshoot) have revealed how they’ve become best friends, explaining how they both understand what it’s like to have albinism 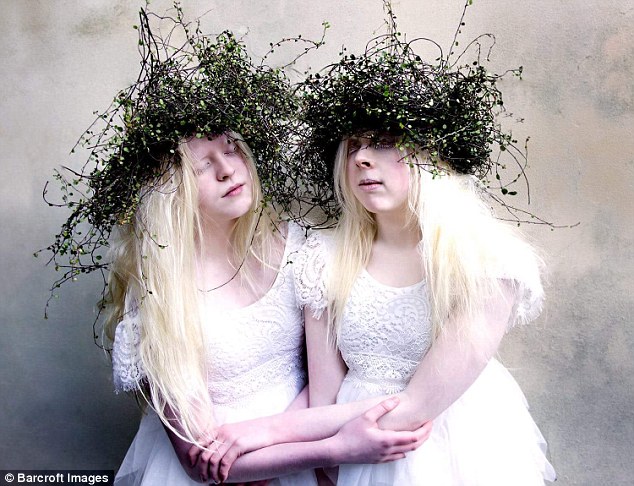 Lucy (right) and Sammy (left, pictured modelling headpieces) explained how their love of fashion has helped them gain confidence

The teenagers recently posed for a photoshoot, in which they donned flower crowns and ethereal dresses.

Explaining her condition, Lucy said: ‘The form of albinism I have is called oculocutaneous albinism, which means that it affects my skin, my hair and my eyes, and it causes a vision impairment.

‘It also makes us very light sensitive and our skin is very sensitive to the sun.’

Describing her friendship with Sammy, she continued: ‘To have Sammy as a close friend it means a lot to me, it is really nice to have someone to relate to because I know a lot of my other friends don’t quite understand as well what I am going through and it is really funny to be able to talk to Sammy and relate to things. 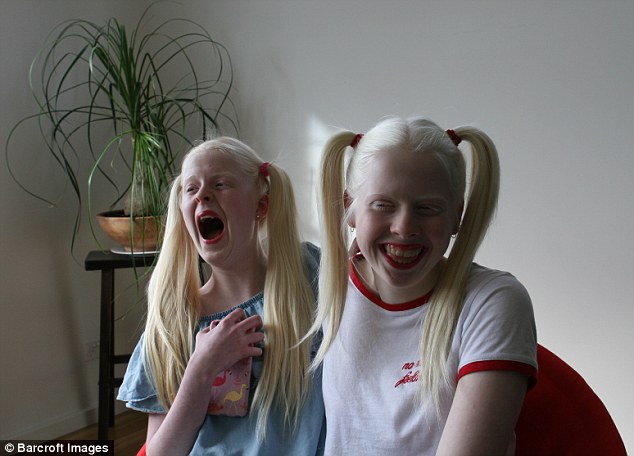 Sammy (left) and Lucy (right) first met as babies, and have become firm friends over the years. They explained how they’ve become close as they both understand what it’s like to have the condition 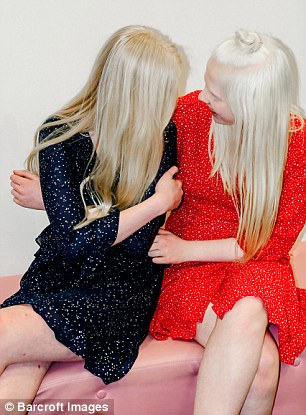 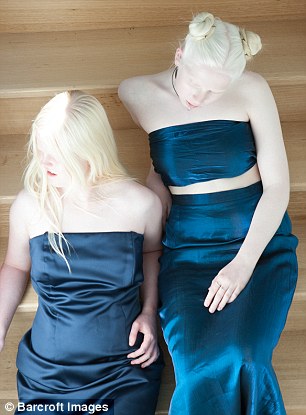 The pair regularly share pictures on their Instagram account (above) where they have over 10,000 followers. Sammy is pictured on the left, while Lucy is on the right in both photos 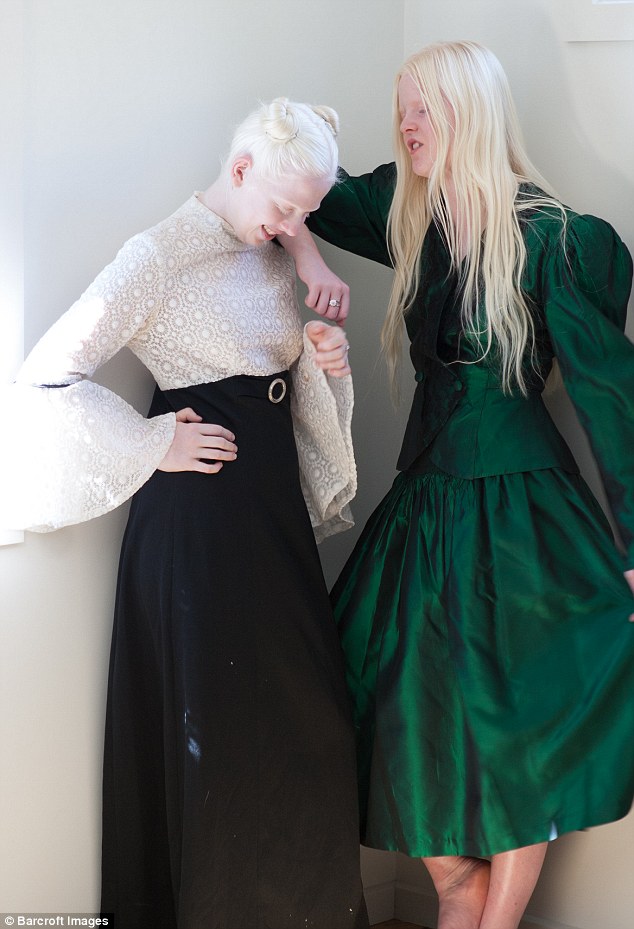 Sammy (right) explained how social media users enjoy connecting with her and Lucy (left) on Instagram, after being drawn by their striking images

‘We are kind of like the same person in a way because we are so similar in what we have been through, and that’s really special for us to have someone that you know so well and they know you so well back, it just doesn’t really feel like we are friends, it feels like we are sisters.’

Sammy added: ‘Yeah we are not perfect, we have our ups and downs and we argue and debate over everything, and we are different people but at the end of the day that doesn’t matter because we are still friends.’

Lucy and Sammy explained how they see negatives and positives in their albinism, but have found self confidence through posting photographs on social media. 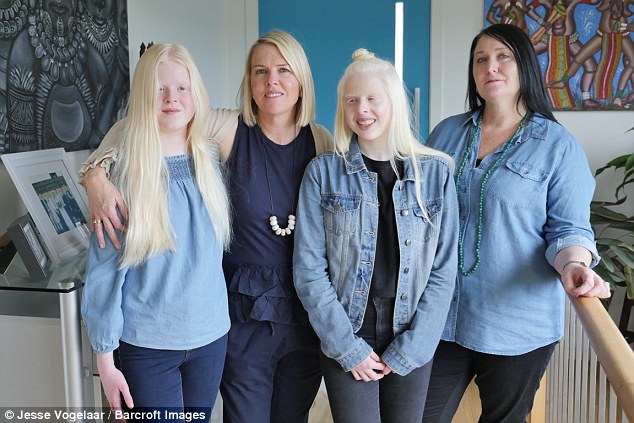 Sammy and Lucy (from left to right, with their mothers Kelli and Erin) explained how they first met when they were babies, after their mothers met at a support group 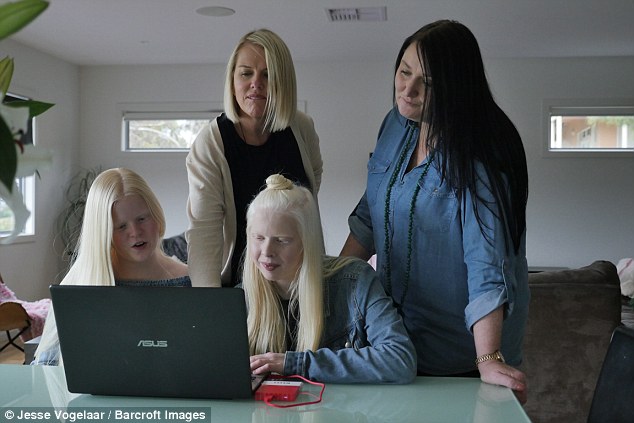 Sammy (left) and Lucy (right, with their mothers behind) explained how they see negatives and positives in their albinism, but have found confidence through posting photos on Instagram 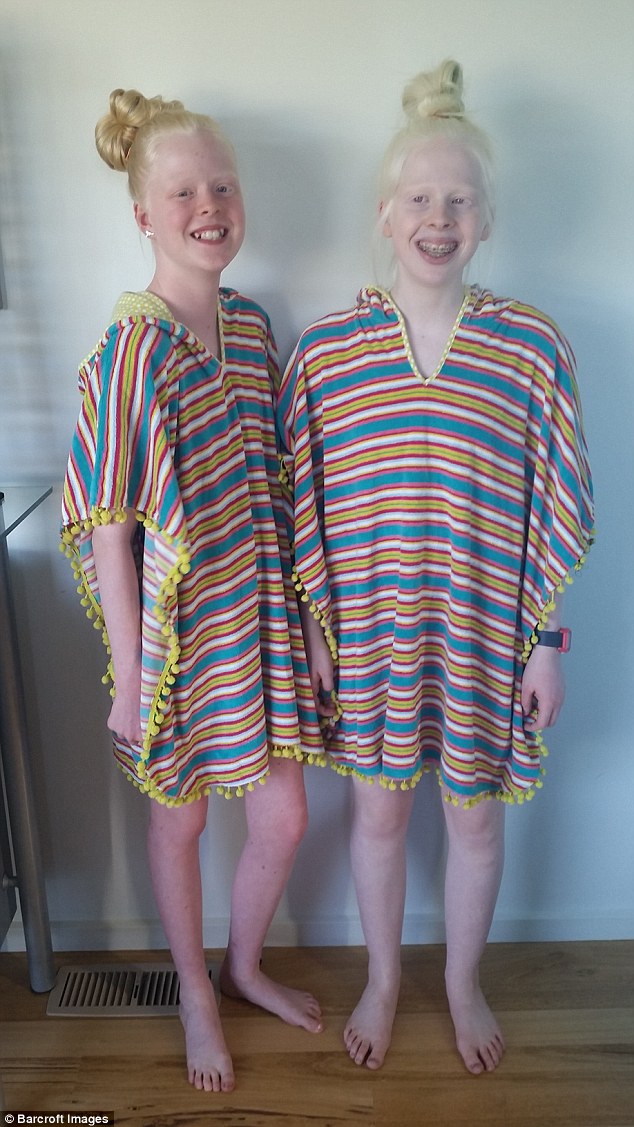 Speaking about her friendship with Lucy (right), Sammy said that it’s ‘really nice to have someone that knows exactly what you are going through’

WHAT IS OCULOCUTANEOUS ALBINISM?

Affected individual typically have very fair skin and white or light blonde hair. It also reduces the pigmentation of the coloured part of the eye – the iris – and the light sensitive tissue at the back of the eye – the retina.

People with the condition usually have vision problems such a reduced sharpness, increased sensitivity to light (photophobia) and involuntary eye movements (nystagmus).

After posting a few photographs on their joint Instagram account, Sammy and Lucy quickly received attention for their striking looks – and now have over 10,000 followers.

Sammy explained: ‘Some of the negatives are the vision, it is hard to see things and especially in the distance.

‘I find it hard to look at my friends Instagram photos and they have got their tan and their dark hair, like it is hard to know that I would never look like that.

‘But then you look at the positives, I look different but that can be a good thing and I can bring out the positives in that, can show it off instead of kind of hiding behind the condition.

‘I like the hair, not so much the skin, I have always had a problem with it.

‘But with the Instagram, if we didn’t have albinism we would still love fashion and everything and photography, but it is just a lot more fun having albinism because it is an excuse for people to get on there and connect with us.’ 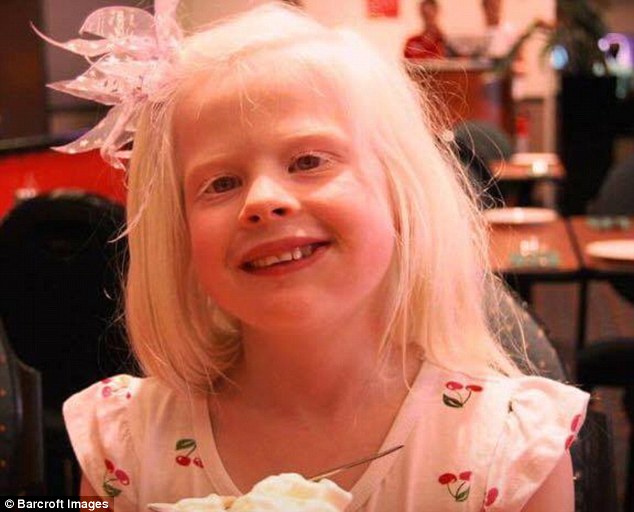 Lucy (pictured as a young child) has oculocutaneous albinism, which means that it affects her skin, her hair and her eyes 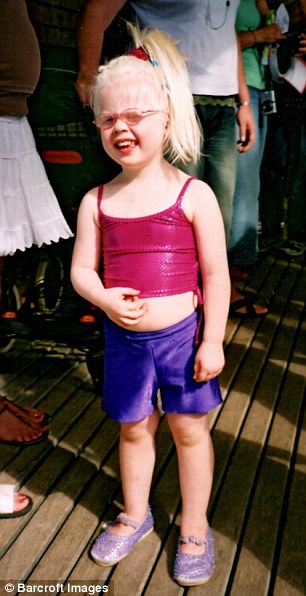 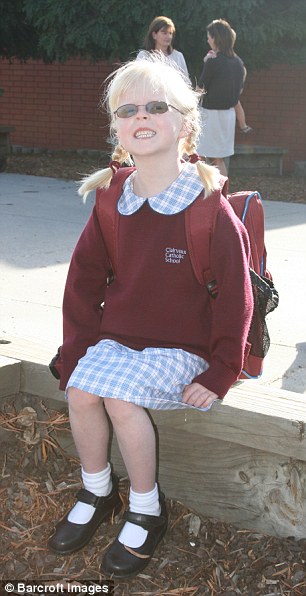 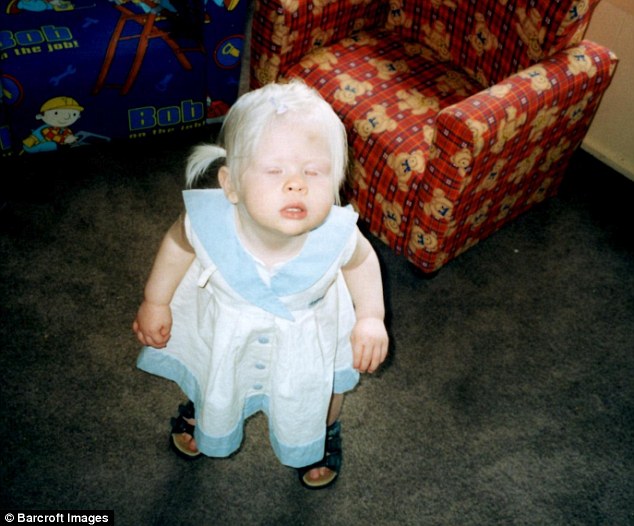 Lucy (above at home in a young child) was diagnosed with albinism when she was around two months old, after doctors discovered there was no colour in her eyes

The mothers of the teenagers explained how they immediately noticed something was different about their children as soon as they were born, but only received a diagnoses a few weeks after.

Lucy’s mother Erin said: ‘When she was born she had a shock of white hair like a little grandma, she was just gorgeous and in the hospital she was known as the white headed baby, all the cleaners and everyone wanted to come in the room and have a look at the baby.

‘When she was around two months old we went to the ophthalmologist and he looked into her eyes and said that there is no colour and she probably has the most severe form of albinism.’

Sammy’s mother Kelli added: ‘We found out when Sammy was six weeks old, I thought something was wrong with her eyes and my husband and I were trying to work out which eye was turning, so she would look at us and one eye would turn, and then the same the other eye was turning and we couldn’t quite work it out. 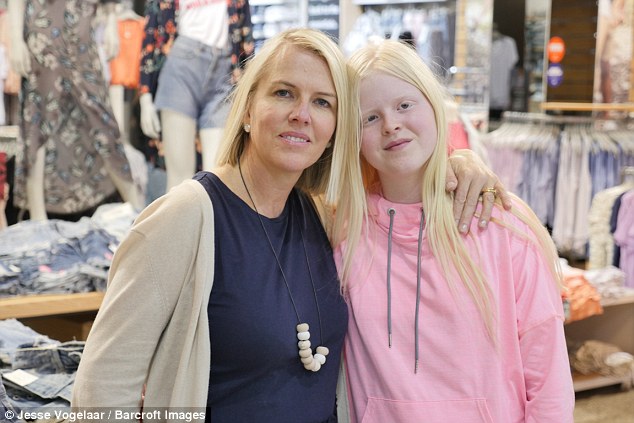 ‘We ended up getting into a pediatric ophthalmologist the following day and she looked straight into the eyes of Sammy and said that she had got oculocutaneous albinism and my husband and I looked at each other and we were like, ‘Oh wonder what that is’ and then she said, “She is albino”.’

Speaking about the girls’ use of Instagram, Erin said: ‘It gives them someone to bounce off someone that’s being through the same things that they have been through.

‘Someone that knows what they are all about I don’t have to explain themselves.’

Kelli added: ‘They are 1 in 17,000 people with albinism so it is reasonably rare to find some one in close location you who has albinism and be a similar age and similar interests so that situation is pretty rare but with the social media today it is bringing that community closer too, so it has been great for the girls.’ Sammy’s mother explained how her daughter (above as a baby) was diagnosed with albinism when she was six weeks old, as she thought something was wrong with her eyes 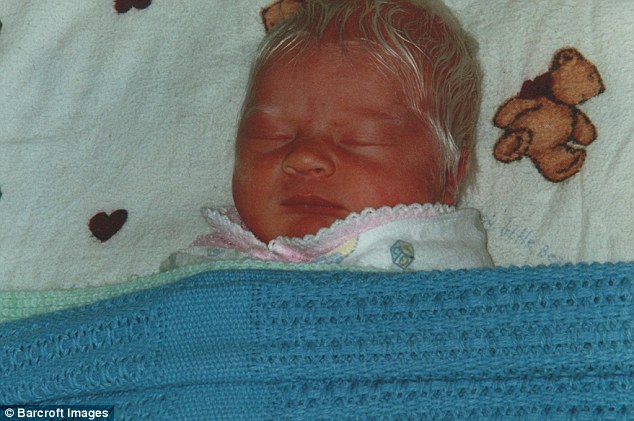 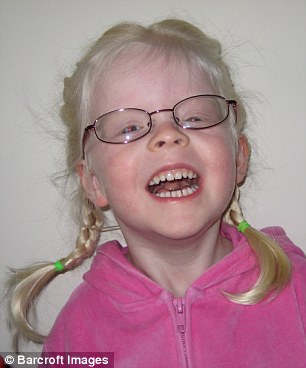 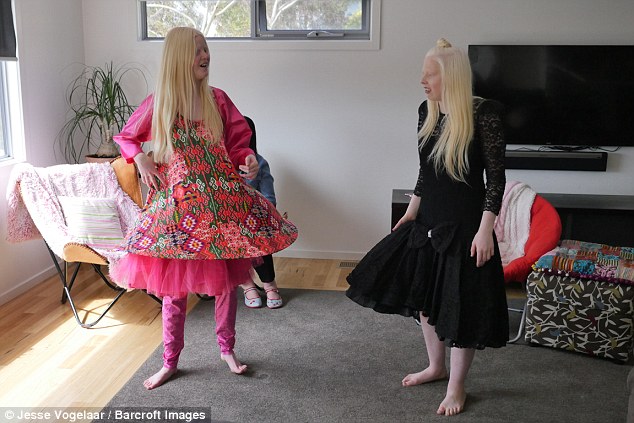 Sammy (left) and Lucy (right) enjoy a shared love of fashion, regularly dressing up when they go to each other’s homes