An autistic man has been left with ‘significant mental stress’ after he was screamed at on a train to ‘shut up’ before being thrown to the ground and punched and kicked.

Victoria Police released CCTV footage on Wednesday in a bid to find a man that may be able to help them with their enquiries into the brutal Melbourne train attack.

Police said the 31-year-old Marcus, from Wantirna, was approached by a man on a Lilydale bound train between Ringwood and Lilydale stations at approximately 7.30am on September 23.

The man told Marcus to ‘shut up’ before throwing him on the ground.

Marcus was then punched and kicked on the floor before the man fled off the train.

In a Victoria Police press conference on Wednesday, Marcus and his mum spoke about the ‘traumatic’ incident on the eve of the AFL grand final holiday.

Marcus’ mother described her son as a young man with a ‘passion for trains’.

‘We have worked hard for over 20 years to make sure Marcus has felt safe in the community. This incident has set us back a little bit,’ she said.

Marcus said he felt ’embarrassed and hurt’ following the incident.

‘I had a very badly bruised head and forehead,’ he said.

Marcus’ mother said despite the attack, her son is still enthusiastic about trains and has not been deterred from travelling.

A Victoria Police spokesperson labelled the attack as ‘unacceptable’ and said police are appealing to the public to contact them with any information.

The man police would like to speak to was described as Caucasian, aged in his mid 30s, bald, and was wearing a black cap with a white motif, black jumper, black puffer vest, black tracksuit pants and black runners.

He was seen riding a dark-coloured mountain bike.

Anyone with information that can assist investigators can contact Crime Stoppers on 1800 333 000. 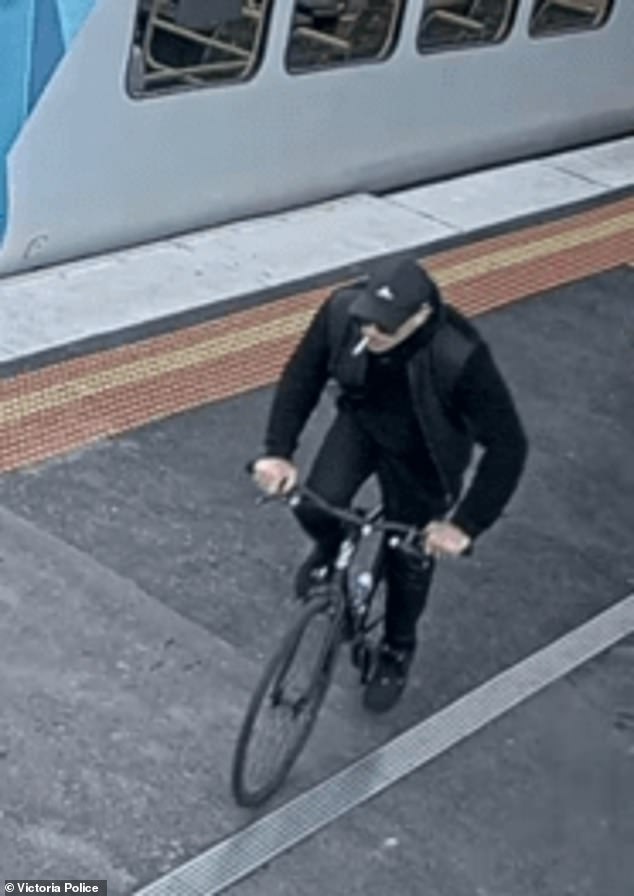