Astounding ‘alien-like’ clouds are spotted in the sky above Melbourne Airport – so what exactly are they?

Residents have been left stunned after discovering a bizarre cloud formation taking shape in the sky.

The strange clouds were spotted forming over Melbourne Airport on Thursday evening.

The clouds appeared to droop and clump together to form little pouches.

Photos of the clouds were uploaded to Facebook, where social media users were left in awe by the eye-catching formations.

Another added: ‘My favourite type of clouds to see .. lovely photos’.

Some made tongue-in-cheek attempts to identify the formation.

‘A technical term would be popcorn clouds!!!’ one wrote.

‘Like the movie……”Cloudy With A Chance Of Meatballs” lol’, another social media user said.

The formation is known as a mattamus cloud – a term which comes from the Latin word ‘mamma’ and translates to ‘udder’ or ‘breast’. 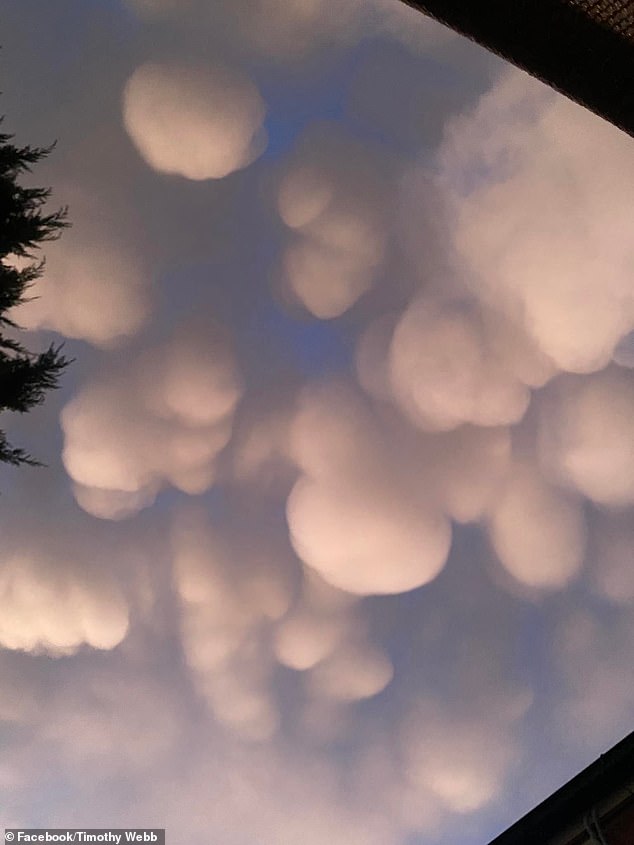 The Bureau of Meteorology explains the clouds are formed in sinking air and often precede a downpour, thunderstorm or hailstorm.

‘As air descends the water in the air evaporates,’ BoM explains on its website.

‘Under certain atmospheric conditions this evaporation results in an increased downward movement of air, which drags the cloud down.

‘The result of this is the sagging protrusions from the underside of a cloud known as mammatus.’

WHAT IS A MAMMATUS CLOUD

Mammatus may appear as smooth, ragged or lumpy lobes and may be opaque or translucent. Because mammatus occur as a grouping of lobes, the way they clump together can vary from an isolated cluster to a field of mammae that spread over hundreds of kilometers to being organized along a line, and may be composed of unequal or similarly-sized lobes. The individual mammatus lobe average diameters of 1–3 kilometres and lengths on average of 1⁄2 kilometre.

A lobe can last an average of 10 minutes, but a whole cluster of mamma can range from 15 minutes to a few hours. They are usually composed of ice, but also can be a mixture of ice and liquid water or be composed of almost entirely liquid water.

True to their ominous appearance, mammatus clouds are often harbingers of a coming storm or other extreme weather system. Typically composed primarily of ice, they can extend for hundreds of miles in each direction and individual formations can remain visibly static for ten to fifteen minutes at a time. While they may appear foreboding they are merely the messengers – appearing around, before or even after severe weather.