Soldiers dressed in full army fatigues have marched the streets of Melbourne in support of police officers tasked with nabbing Melburnians who fail to comply with new compulsory mask-wearing laws.

Daily Mail Australia watched as soldiers acted as ‘muscle’ to back-up police on patrols after being stationed at Victoria’s troubled quarantine hotels.

A soldier told Daily Mail Australia they had been positioned at the hotels for at week and had now been deployed to help back-up police. 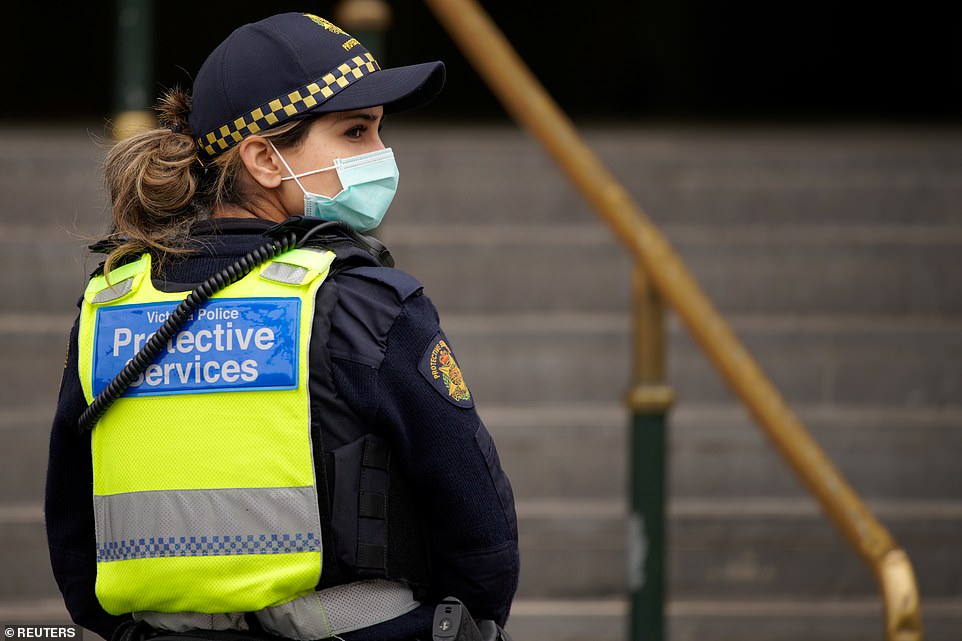 Soldiers stand by as police struggle with a man on King Street, in Melbourne’s CBD, on Thursday 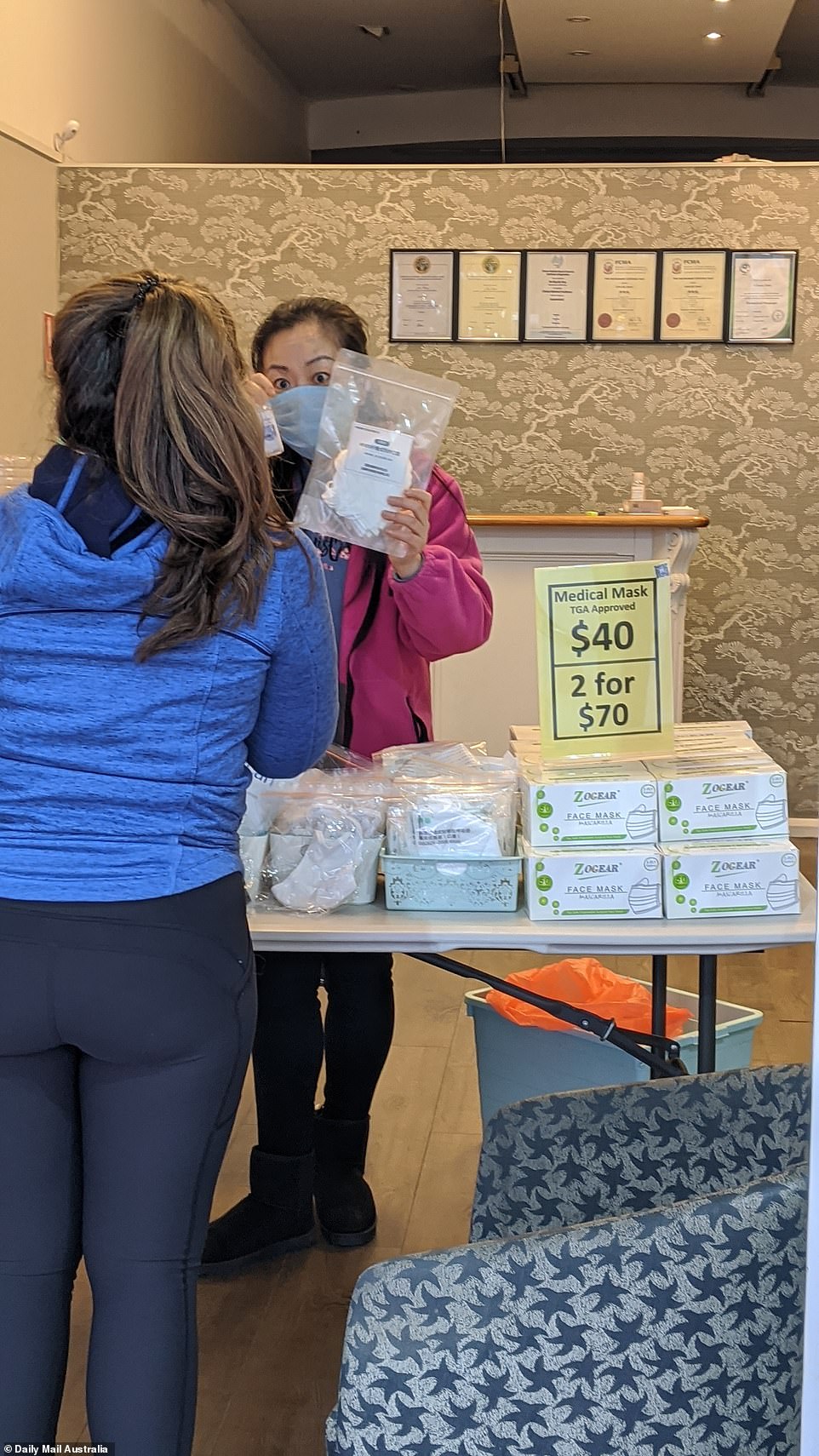 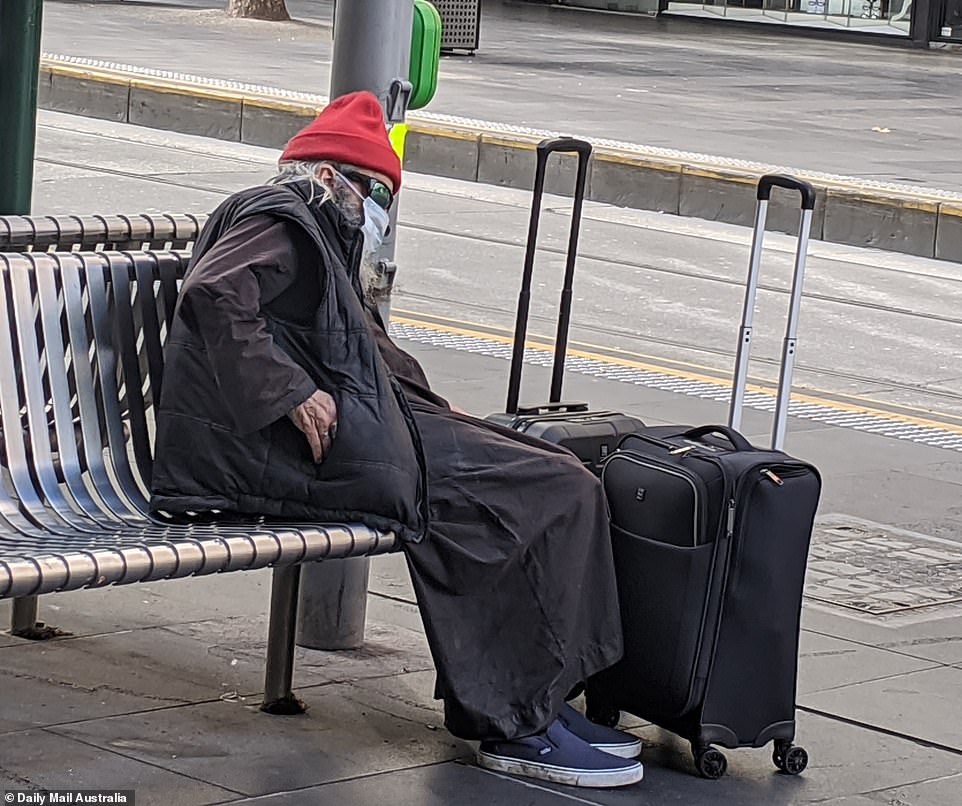 A team of soldiers was seen converging on a violent struggle between police and an agitated man on Kings Street on Thursday afternoon.

It is understood the man, who appeared to be suffering some from mental illness, had not been wearing a mask.

The soldiers stood back and observed as police wrestled the man into the back of a divisional van.

Melburnians have heeded the call to wear masks under threat of punishment, but anger and complacency among an increasingly frustrated community threatens to derail not just this city, but the entire nation.

As Victoria recorded 403 COVID-19 cases – the state’s third-highest day since the pandemic began – and five deaths on Thursday, the fear remains many Victorians will continue to break the lockdown rules.

While residents trapped in the lockdown zones will largely comply with the laws, they’re many told Daily Mail Australia they are fed up with the threats and intimidation by a man they hold responsible for their pain. 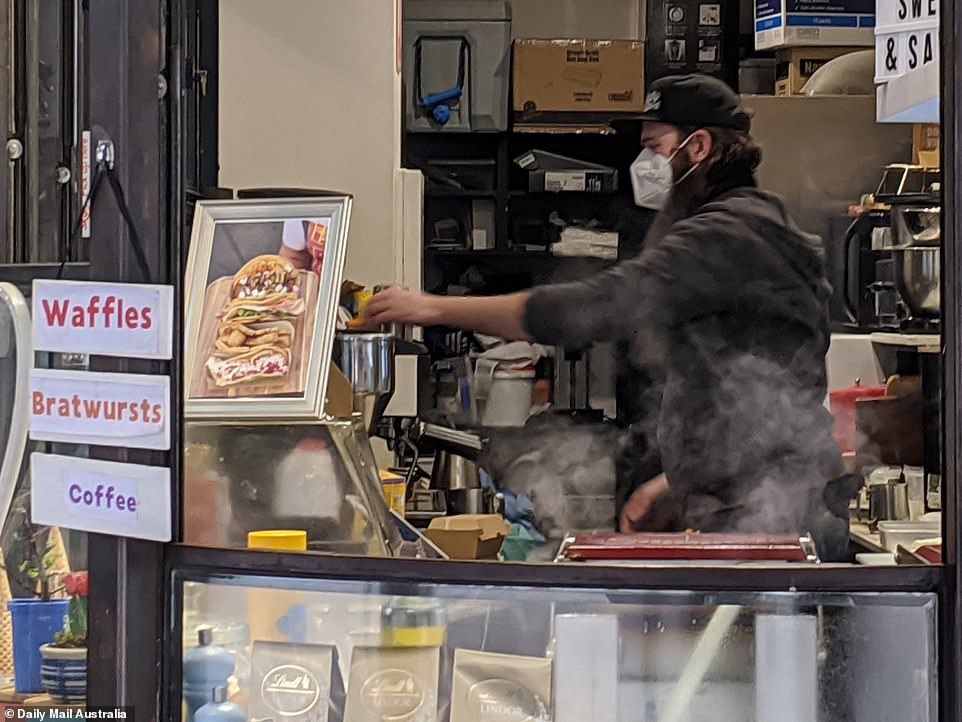 On Thursday, Andrews continued to scare Victorians as they wiped the fog from their misty glasses, warning its youth that they made up a significant number of the state’s new cases.

‘One of the terrible tragedies today is a man in his 50s, this is not something that just affects people frail and of older age.

It was just yesterday Mr Andrews blasted Victorians for continuing to go to work while showing symptoms of sickness.

On Wednesday, Victorians were told 53 per cent of people waiting for a coronavirus test results had continued about their lives, going shopping and to work even with symptoms.

It was the same day soldiers were first seen marching down the streets of Melbourne.

‘They feel sick, sick enough to get a test, and then, somehow, not willing to stay at home and wait — on average — a couple of days, and sometimes sooner — to get the results of that test,’ Mr Andrews said.

He said that kind of behaviour would lead to numbers continuing to increase, which would cause the current lockdown to be extended.

‘A six-week shutdown will not be for six weeks. It will run for much longer than that,’ he said.

Many Melburnians argue it is the premier’s ‘holier than thou’ approach that has caused them to behave differently than the first lockdown in March.

It has also led Melburnians to feel a sense of inevitability that the virus can now not be contained.

‘His biggest (mistake) was not the hotels, it was the (nonsense) of treating everyone like idiots and not allowing golf, fishing etc. Ridiculous,’ one city dweller told Daily Mail Australia on Thursday.

‘Because of course the first chance people have to do the wrong thing, they will. It’s like being locked in prison. What’s the first thing you’d do when you get out… go to the pub.’

Daily Mail Australia is aware of parents’ of young children continuing to go to work and take their kids to kindergartens despite showing signs of illness.

‘It’s a sniffle I get every year and it’s nothing more,’ one mum told Daily Mail Australia. ‘Why should these kids miss out because their mum has a runny nose.’ 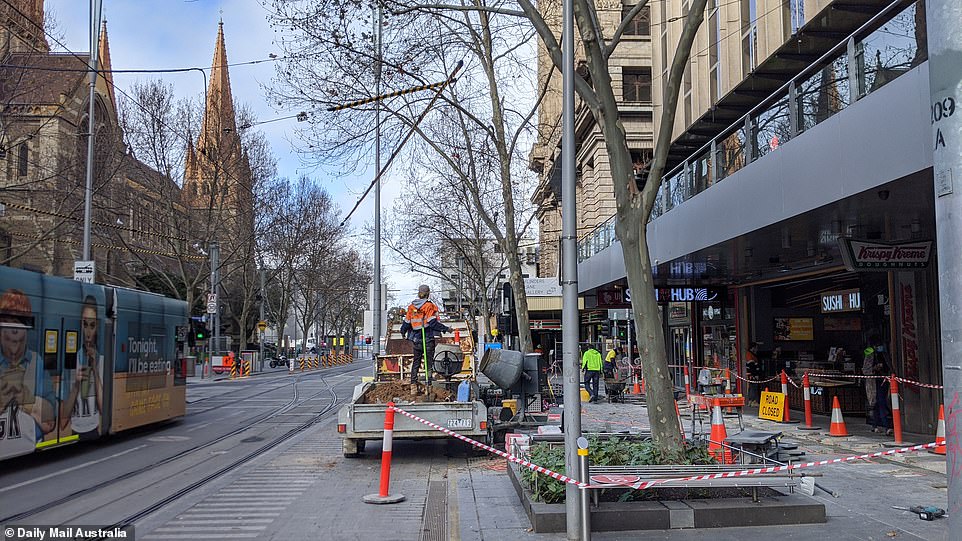 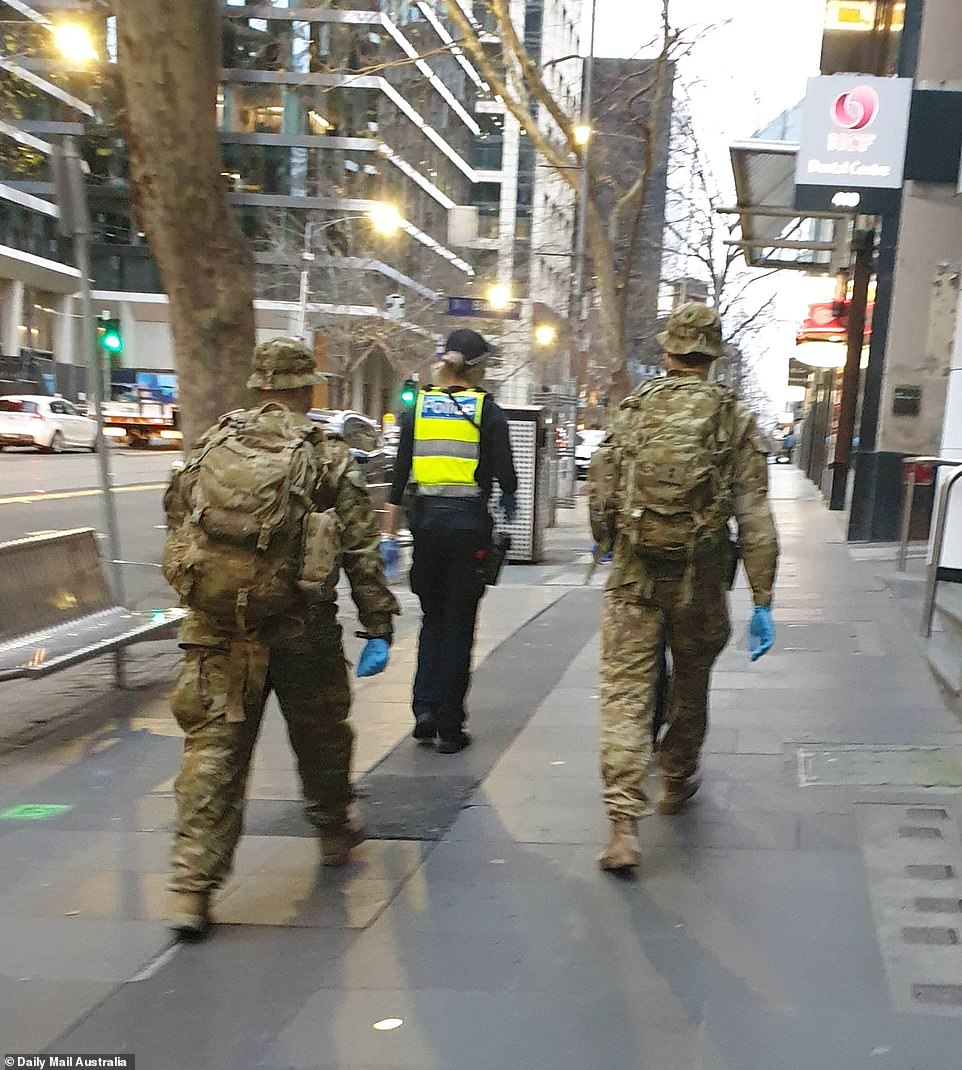 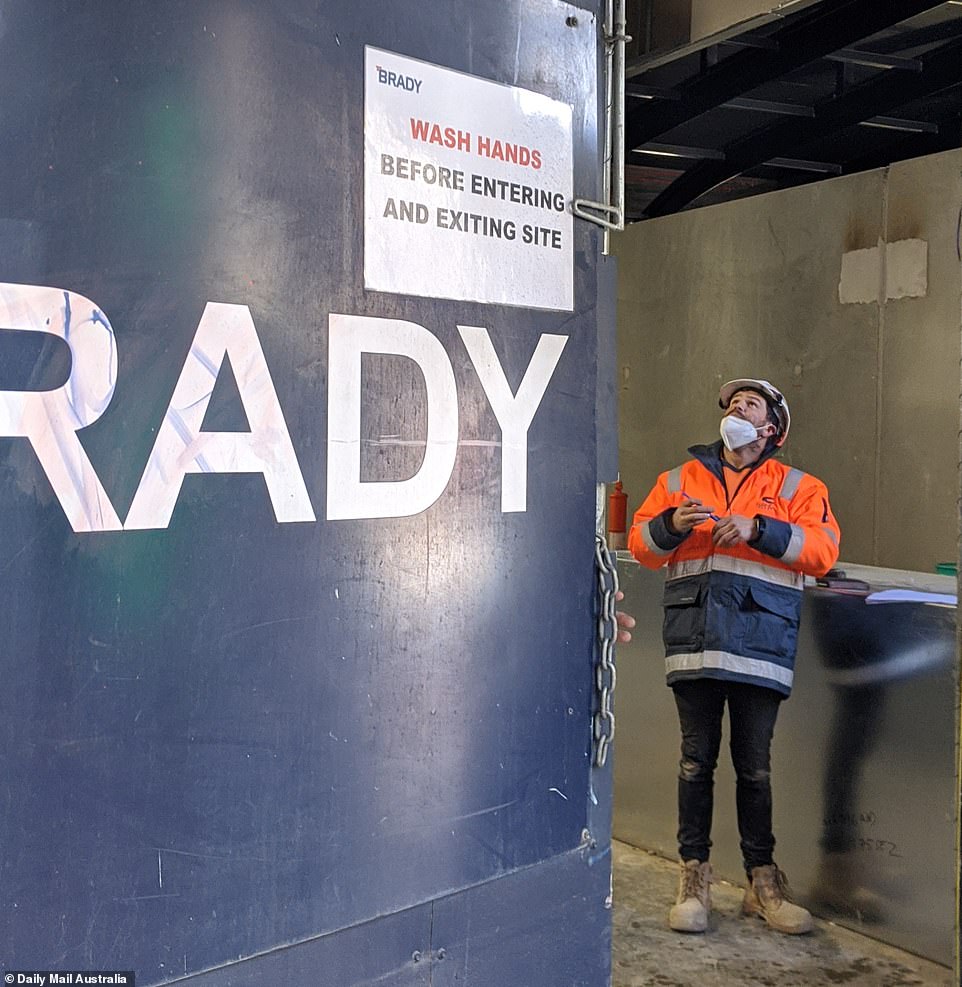 On Wednesday, people were pictured lining up, ignoring social distancing rules, outside an Aldi in Epping, in one of Melbourne’s lockdown zones.

Many had been there to get a children’s table and chair set.

Melburnians remain angry that they have been plunged into another lockdown that threatens to ruin the economy for generations to come.

More are annoyed that their premier continues to ‘treat them like children’ and pass the blame for COVID-19 spread, and subsequent deaths, on them.

Social media is awash with comments from angry Victorians critical of the premier’s handling of the current outbreak.

‘They can’t control it, and because of the stuff-ups, it’s inevitable people are going to die,’ one Melburnian said.

‘So the challenge is to minimise the deaths while not killing the next two generations. To do that you need to allow people to go about their business and ensure there are adequate resources to deal with those who are going to die.’

In March, during the early days of Victoria’s first lockdown, the sound of traffic across the suburbs had all but vanished.

Now, Melburnians in the locked down zones still wake to the morning sounds of flowing traffic.

A simple look at traffic conditions driving into Melbourne from the west on Thursday suggested more people were on the move both in and out of the city.

In Melbourne’s CBD on Thursday, those few who ventured out onto the streets mostly adhered to the new mask-wearing laws. 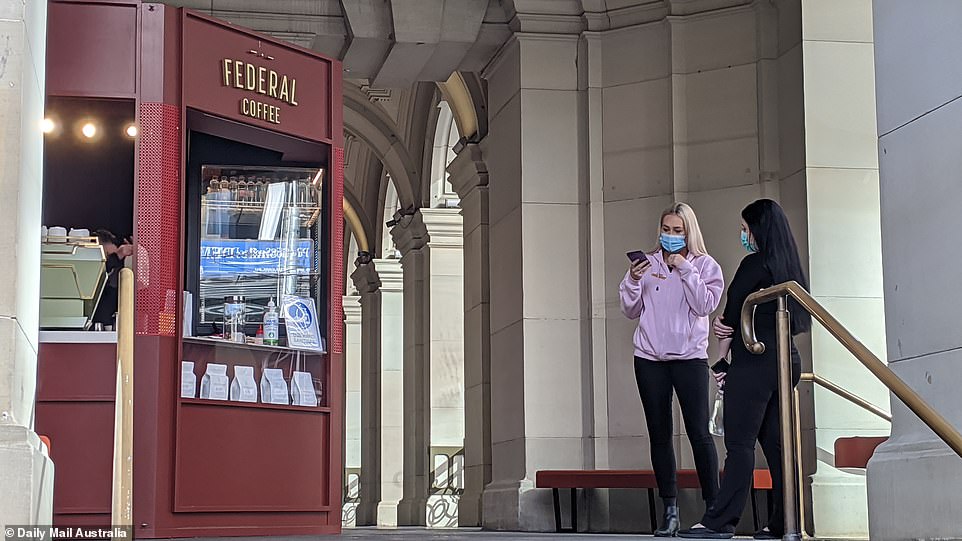 Masks are now mandatory fashion accessories across Melbourne’s metropolitan area. On Thursday, customers wait for a coffee at a city cafe 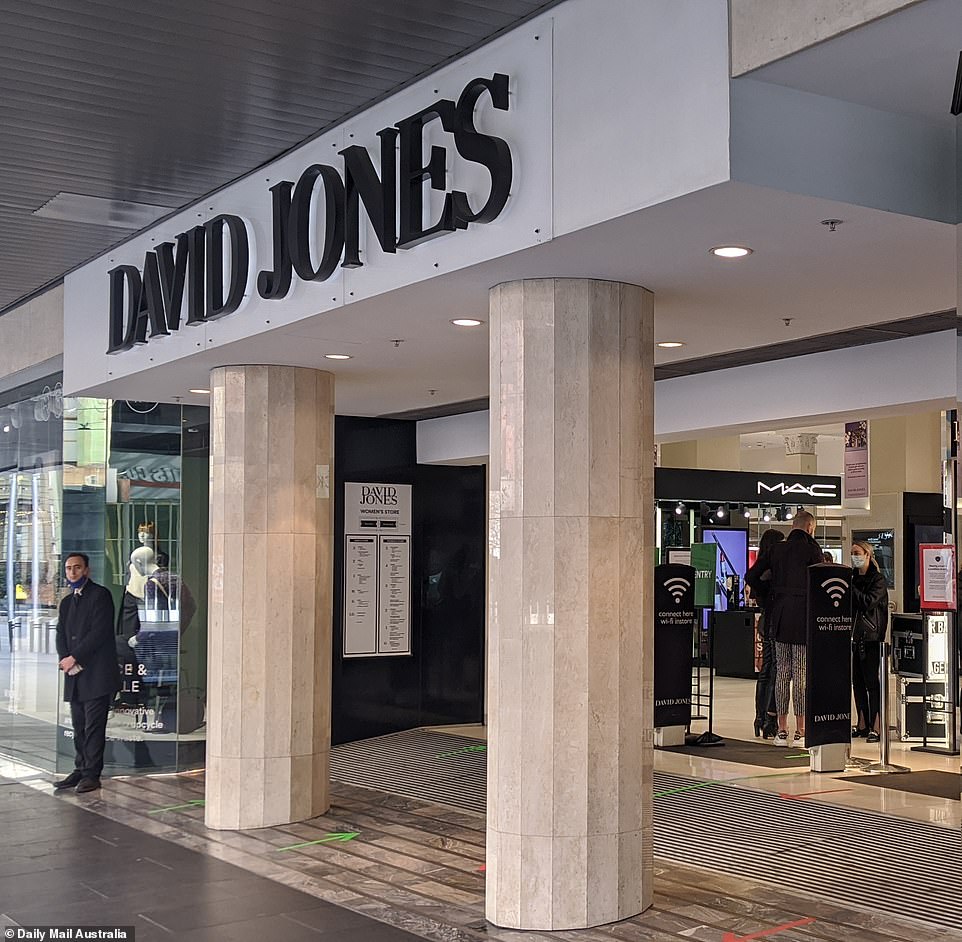 Security guards stand outside of David Jones in Melbourne on Thursday. Next door, Myer was closed 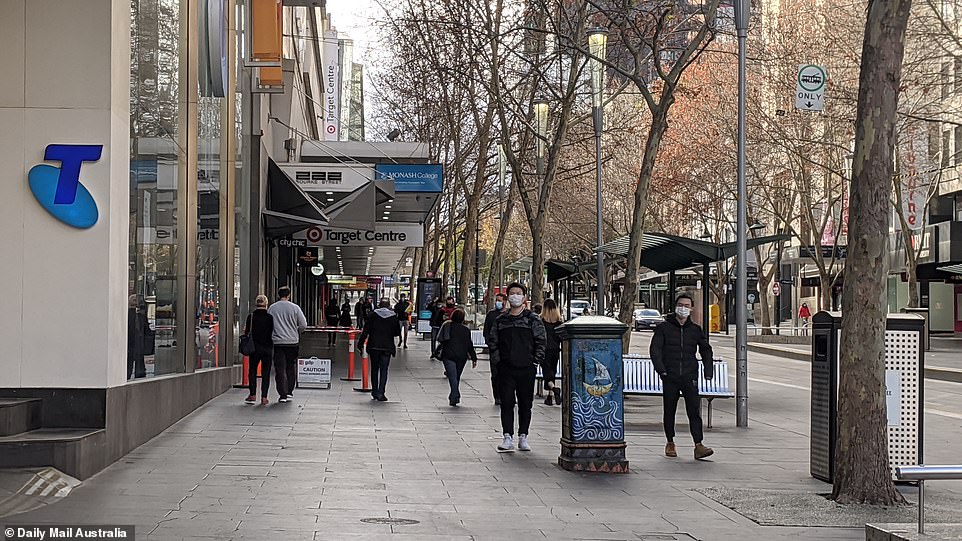 About the only people not wearing masks in Melbourne on Thursday were a few construction workers who pulled their masks down while on a break.

Ironically, it was mostly to drag toxic smoke into their lungs from their cigarettes.

Signs on construction zones ask workers to ensure their hands are sanitised before they walked inside and got knee deep in the muck.

Victorians face a $200 on-the-spot fine if they are caught out in public not wearing a mask without a valid reason.

As the laws came into effect, just a few masked officers were seen patrolling the city streets, where the most common crimes being committed were by jaywalkers ignoring traffic lights on empty streets.

Supplies of the now essential masks continue to be depleted, with the state government providing chemists across the locked down zones with thousands of the masks to keep up with demand.

By Thursday morning, one massage parlour in the heart of the CBD was selling masks for $40 a pop, or $70 for two.

A customer was in there looking to purchase when Daily Mail Australia walked by. 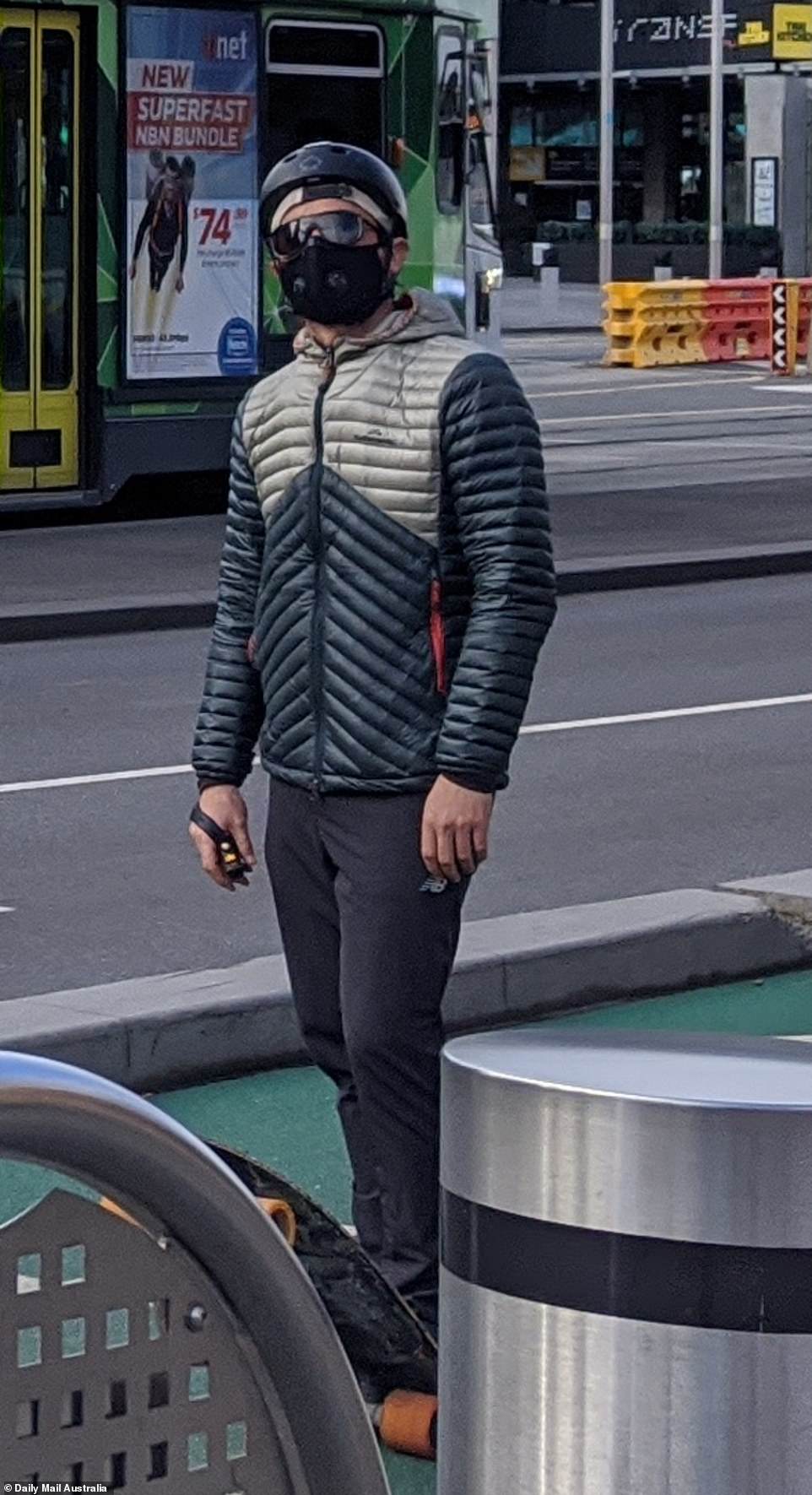 He was a skater boy: A man riding a skateboard wears a mask as he cruises through the CBD on Thursday 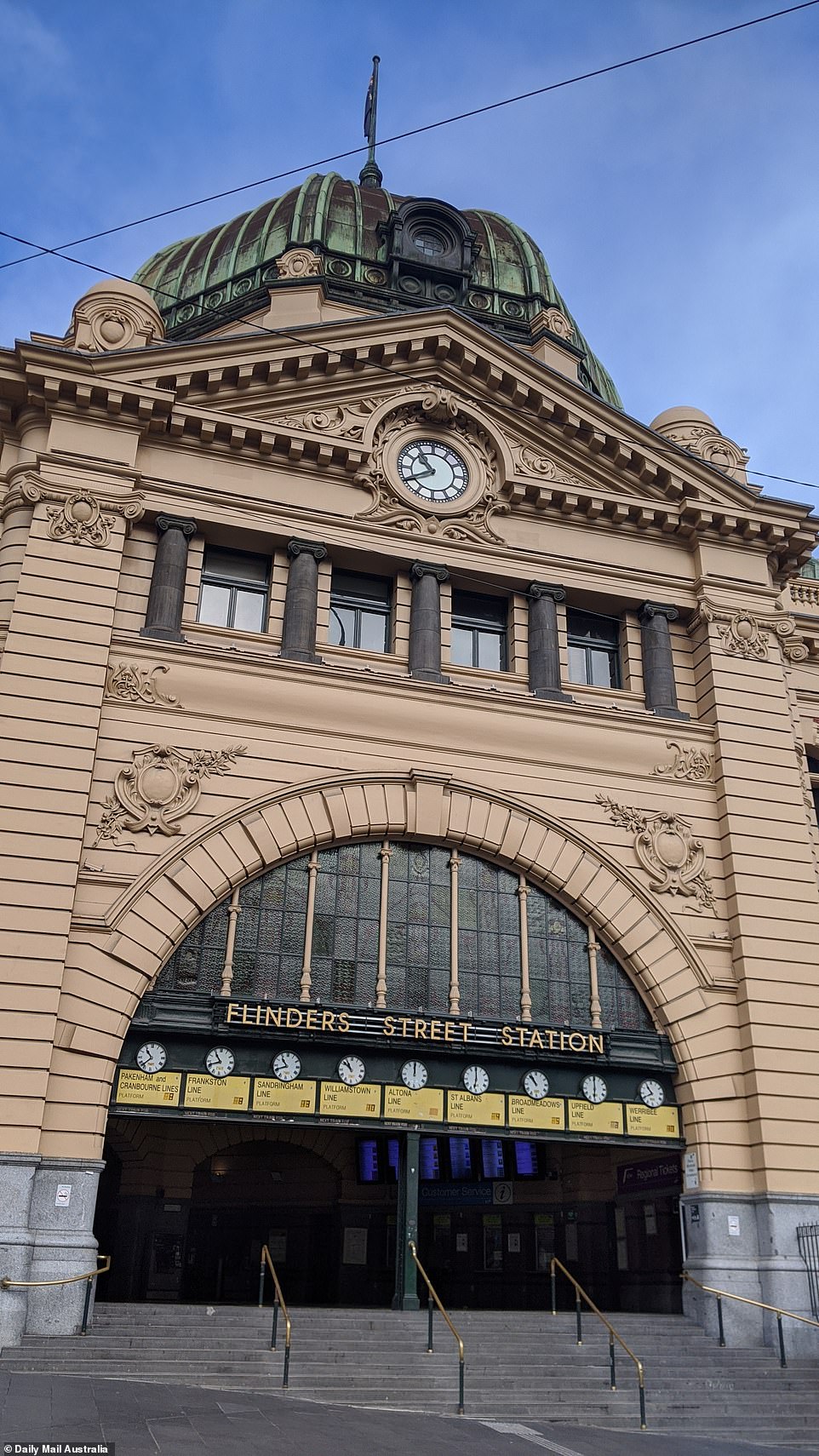 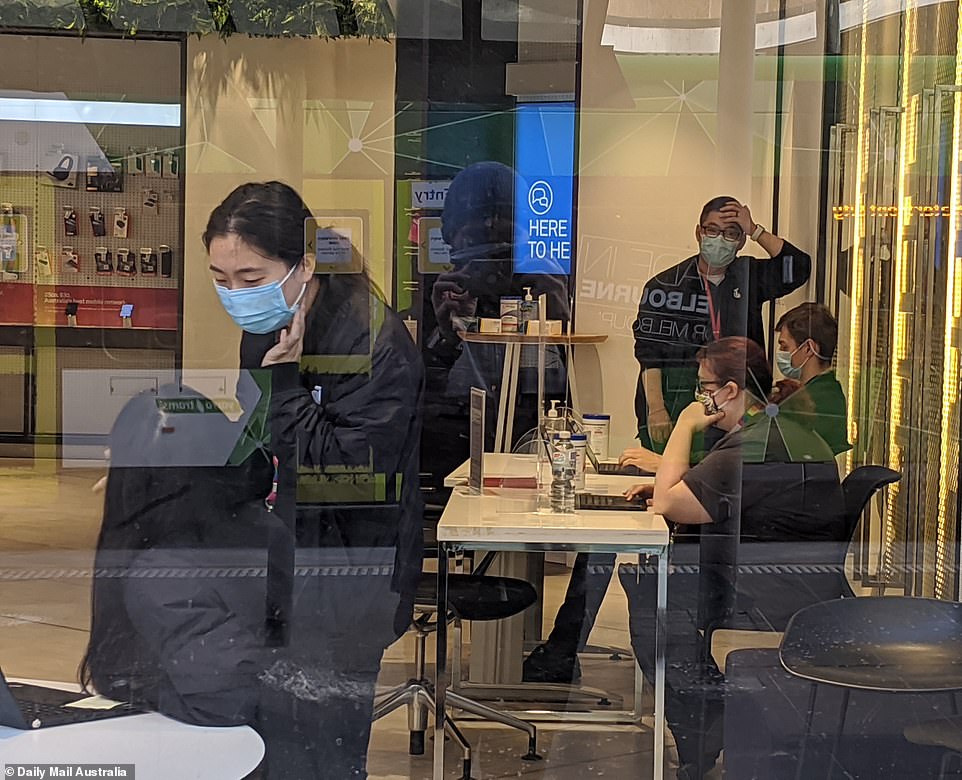 But as Melburnians continue to moan about their lot in life, the grim reality of the pandemic is all too real for many trapped in isolation hell.

‘For all those who seem to excuse the number of coronavirus deaths by saying ‘well they were old, anyway’, I have one question. What age is it OK to start killing people off?’ a well respected court reporter posted on Facebook.

‘My mum is in her late 80s and is in an aged care facility that has gone into total lockdown after the family member of an employee tested positive. As it is, the restrictions already in place mean I haven’t been able to see her since March.

‘She’s riddled with dementia … There’s no family or friends around for support. Nobody gets the chance to say goodbye.

‘I’ve resigned myself to the fact I’ll never see her again.

‘So for those who excuse the number of COVID deaths on the basis of the victim’s age, my mum’s death would be ok in those circumstances then, would it?’