She debuted her new blonde makeover this weekend, in order to show her estranged ex Jeremy ‘Hot Felon’ Meeks what he’s missing.

And Melissa Meeks, 38, seems to have a new man as well as a new look as she was spotted out with  athlete and brief Love Island star Theo Campbell, 26, on Saturday.

Out for an autumnal stroll around Hyde Park, London, the pair were looking loved up as they gazed at each other and chatted animatedly hand-in-hand.

The duo looked as if they’d compared outfit notes as well,  both wearing ripped skinny jeans and black jackets.

Melissa dressed the ensemble up in a plunging top and knee-high black velvet boots.

The duo sat on a bench to take selfies together – sure to upload them to social media for the likes of Jeremy, 33, and his new Topshop heiress flame Chloe Green, 26, to see. 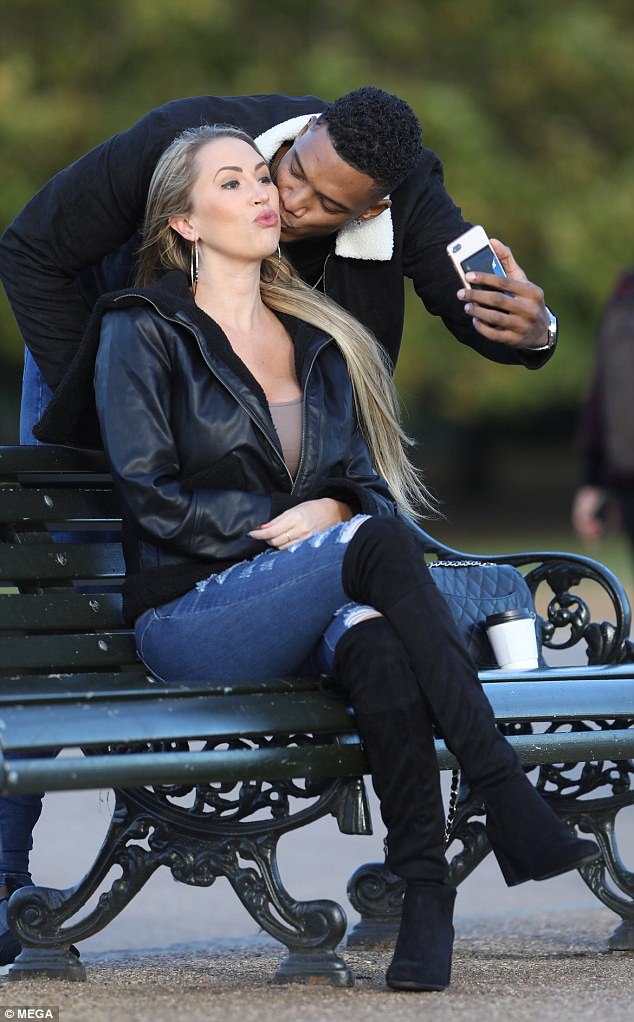 Get a loada this: The duo sat on a bench to take selfies together – sure to upload them to social media for the likes of Jeremy, 33, and his new Topshop heiress flame Chloe Green, 26, to see 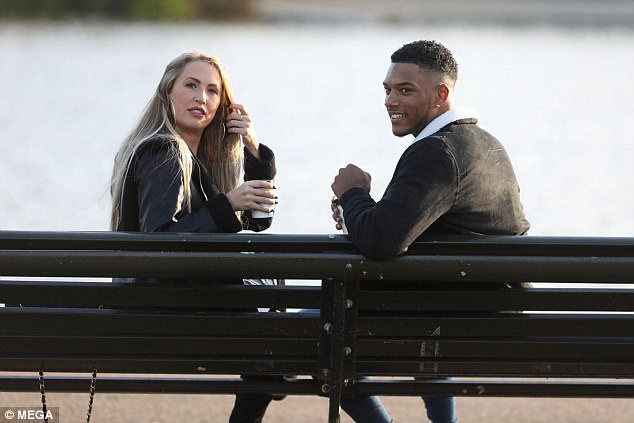 Mix and match: The duo looked as if they’d compared outfit notes as well, both wearing ripped skinny jeans and black jackets

A friend of Melissa has revealed: ‘She is so excited to have met Theo. It is early days of course but she really likes him after first meeting him on Instagram.

‘Melissa loves his British accent and that he ís an athlete. It’s also a plus that he’s not a felon!’

At the beginning of October Melissa, a natural brunette, stepped out with newly blonde locks in Los Angeles at the end of an extensive makeover, which included eyebrow and eyelash treatments, a cryotherapy session, and even a ‘vaginal tightening’ performed by a plastic surgeon.

She also had her eyebrows microbladed during a treatment favored by stars such as Madonna and Bella Thorne, which makes the brows look neater and fuller. 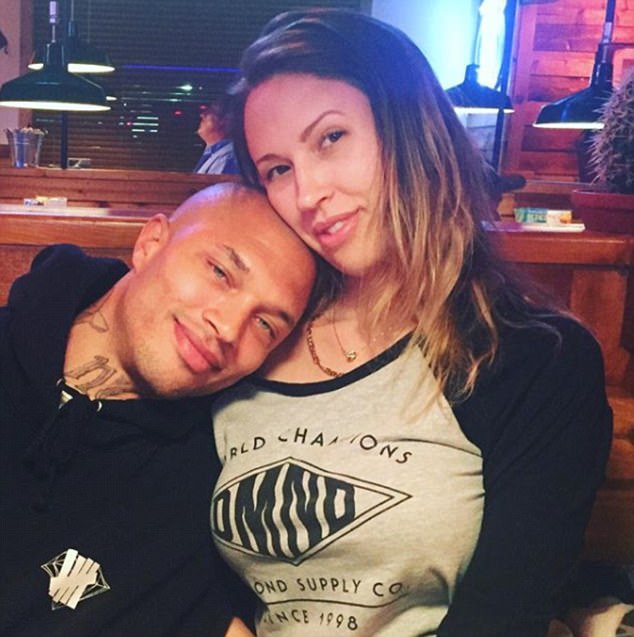 Former flames: The mother-of-three, who stayed with felon-turned-model Jeremy throughout his stint in prison, put on a brave face as she kicked off the new chapter in her life

The mother-of-three was left heartbroken when photos surfaced of former felon Jeremy canoodling on a yacht with British billionaire heiress Chloe.

Meanwhile, Jeremy and Chloe took their controversial romance a step further last month, when he met her mum aboard a luxury yacht in Monaco.

At the beginning of the month  they were forced to deny engagement rumours, after she flashed a huge rock on her wedding finger in a series of confusing snapchats.  but made sure she kept her ring finger hidden.

The duo have since been spotted on a series of sun-soaked holidays together, even appearing together at various public events, cementing their relationship status. 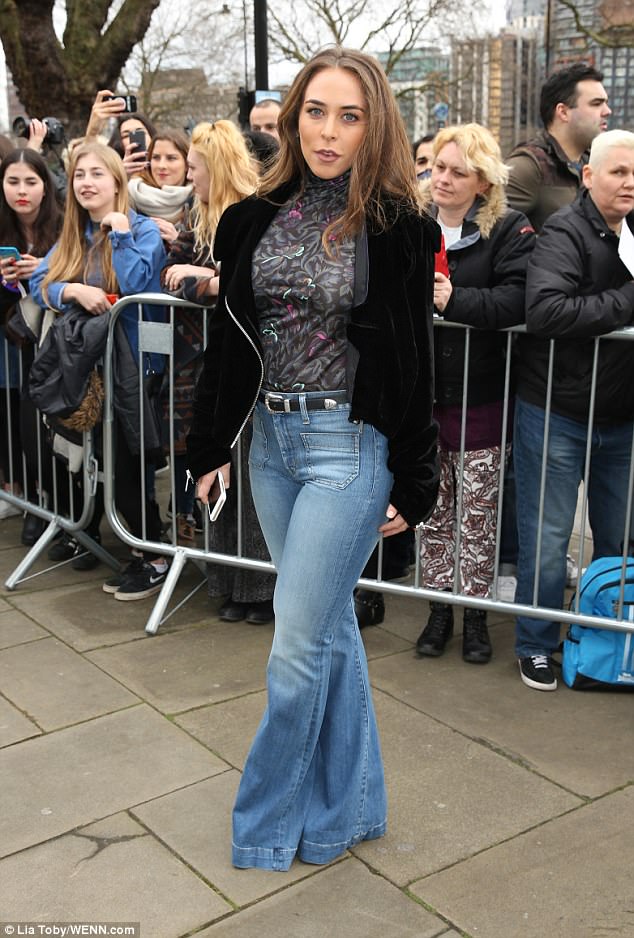 His new muse: Melissa, 38, was left heartbroken when photos surfaced of former felon Jeremy, 33, canoodling on a yacht with British billionaire heiress Chloe Green, 26 (pictured above)

Jeremy began August by publicly parading his romance with heiress Chloe as they enjoyed carnival during a sunny Barbados holiday, his estranged wife Melissa appeared to take their continuous insensitivity in her stride as she took to Instagram to show off her sizzling physique soon after.

The brave nurse appeared to be beginning a post break-up body make-over, posing in her underwear as she showed off her already enviable figure.

Dressed in a black thong, the nurse proudly displayed her toned derriere and flat stomach, teasing a glimpse of her red lace bra. 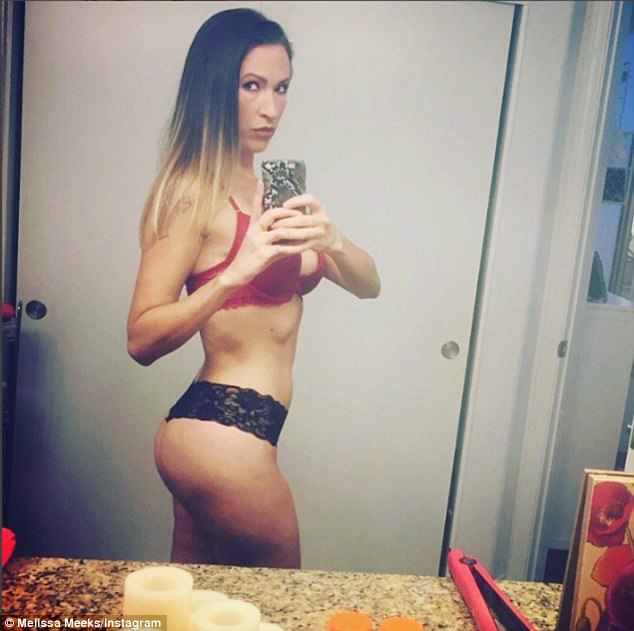 Moving on: Jeremy’s estranged wife Melissa took to Instagram to show off her sizzling physique last month as she appeared to be beginning a post break-up body make over last month 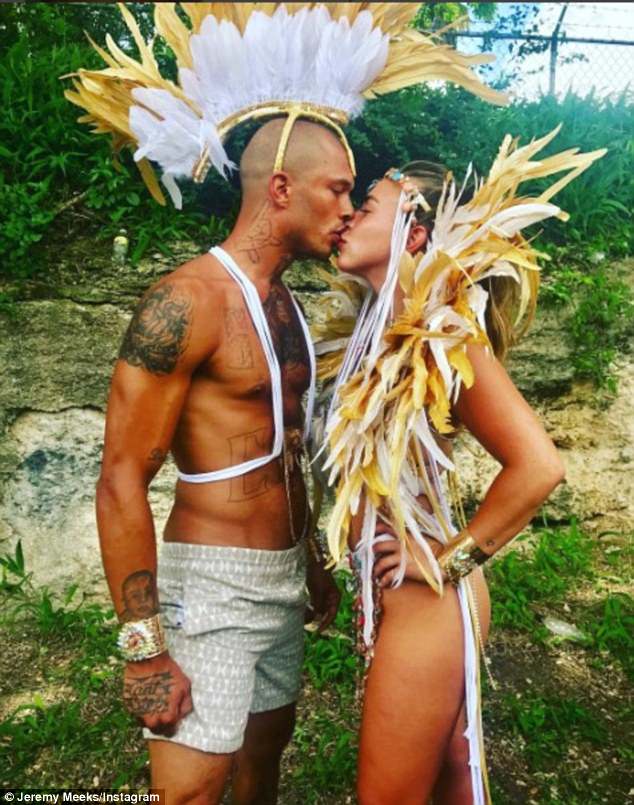 And Melissa garnered an influx of supportive messages from followers, who slammed the actions of Jeremy- who Melissa stayed with during his lengthy prison stint.

And despite staying maintaining a largely dignified silence over her estranged husband’s actions, in July Melissa gave a rare insight into her life post-Jeremy Meeks, as she took to Instagram in a lengthy tirade.

The mother-of-three, who shares a seven-year-old son with the felon turned model, let rip just days after he continued to parade his romance with Chloe.

Taking to Instagram, the nurse shared a snapchot which read: ‘I fed mouths that talked sh** about me. I wiped tears from the same people that caused mine. Picked up people that tried to knock me down. Did favours for those who couldn’t do sh** for me. Been there for the ones that left me. Crazy? Maybe.’ 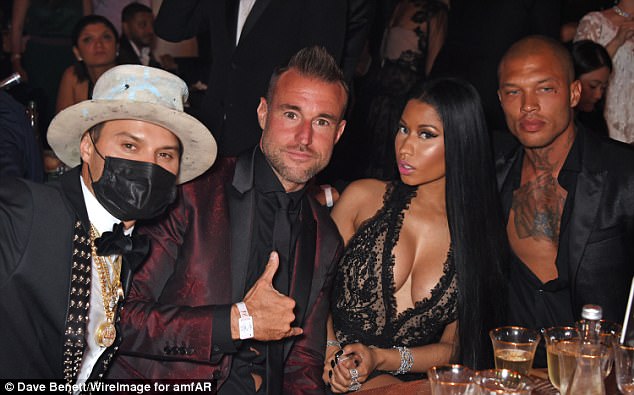 Mingling with the A list: The model mingled with the likes of superstar rapper Nicki Minaj in Cannes in May- when he reportedly met Chloe

Proving she was taking the high road, the brave beauty concluded: ‘But I don’t lose myself in the hatred of others. I continue to be me because I can’t change who I am. Life ain’t easy but through the bullsh** I remain solid. Because I know god got big plans for me.’

‘Saw this and felt how REAL it was, so I wanted to share it… #haveablessedday #remember #keepitsolid’, she captioned the picture.

And as Chloe and Jeremy engaged in another public round of PDA, wife Melissa finally removed reference to Jeremy on her Instagram bio.

Previously describing herself as ‘Wife to Jeremy Meeks’ along with a ring emoji, the pretty nurse removed reference to him, keeping the remainder of the bio as ‘Blessed beyond belief.. Dedicated to everything I do… Me and my Fam’.

Jeremy sent shock waves across the internet when pictures emerged of him kissing Chloe Green on a yacht in Turkey in June. 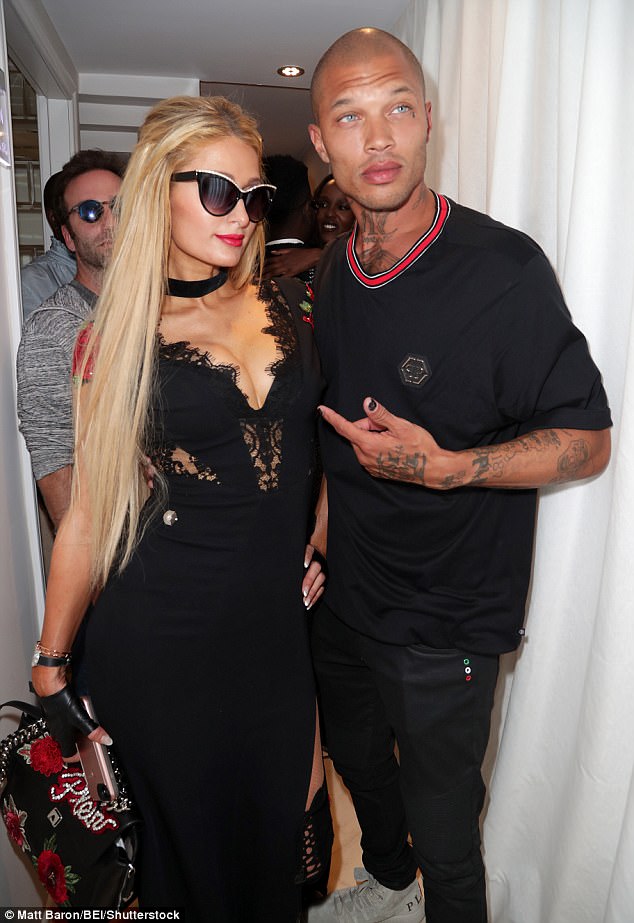 The duo reportedly met during the Cannes Film Festival in May, where Jeremy was modelling for Phillip Plein.

And in July Jeremy filed for legal separation from mother-of-three Melissa, who he shares her youngest son with.

He was married to the nurse, who stayed with him throughout his stint in prison, for eight years. 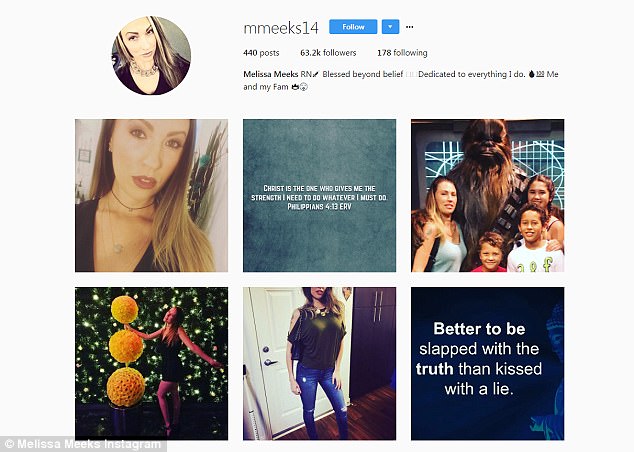 No longer ‘Wife of Jeremy Meeks’: After they filed for separation, Melissa finally removed reference to Jeremy on her Instagram bio

She later told the Mail of her devastation, admitting that her husband had been seduced by the glamour of his newfound modelling career.

‘I know it takes two to tango but she knew he was married. To me, that’s unforgivable. My whole world has been torn apart by this. What do I tell our children? My heart is broken.

‘What sort of woman would do something like this to another woman? My marriage wasn’t perfect but I thought it could be saved, until this happened. 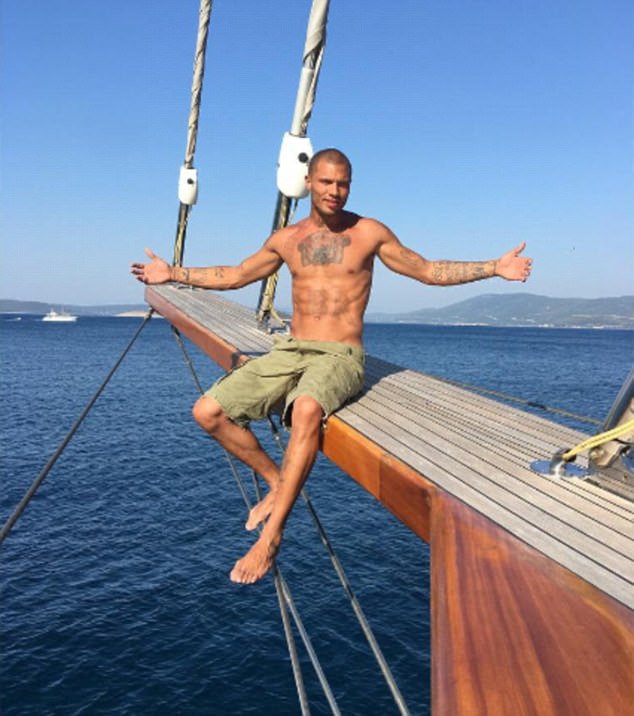 Life of luxury: Meeks sent tongues wagging after pictures emerged of him kissing British Topshop heiress Chloe Green on a yacht in Turkey in June

‘Did either of them think about the children and how this will affect them? They’re the innocent victims in this. And so am I.’

Melissa is mother to his biological child Jeremy Jr, seven, and Robert, 11, Melissa’s son from a previous relationship. She also has a daughter, 16-year-old Ellie, and says both stepchildren consider Meeks a father figure.

Meeks and Chloe, who is heir to her father Sir Philip’s billions, were pictured sharing the intimate kiss aboard a £112,000-a-week yacht in Bodrum.

At the time he was still with his wife of eight years, who was seemingly unaware of his new romance until pictures surfaced.

And fans quickly turned on the duo, accusing Chloe of breaking up a marriage.

Chloe was soon forced to delete her Instagram, after followers trolled a gloating post she shared as she snuggled up to married Jeremy.

However she since returned to the social media site, changing her settings to private.

Meeks too has edited his account, deleting all photographs of him and Melissa, which has not gone down with the fans who fell in love with his good looks after his California mugshot went viral in 2014. 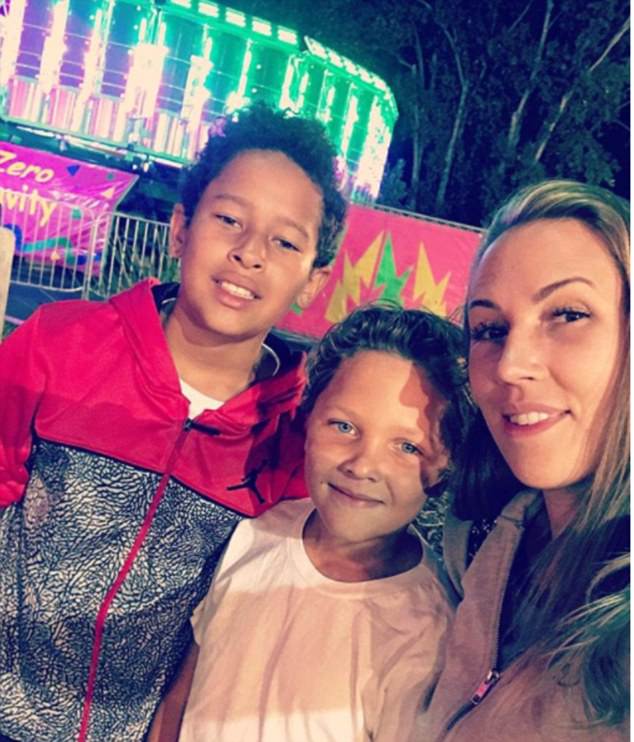 Staying mum: Melissa has stayed quiet on her heartbreak, concentrating on raising her three children (pictured with Bobby and Jeremy junior this month)

Meeks, whose looks have earned him a huge fan base, made his first official modelling appearance at New York fashion week this year, and has certainly turned his life around in an impressive way since his release from prison.

However his journey to stardom hasn’t been all smooth-sailing, after he was recently barred from entry to the UK after arriving at London’s Heathrow airport from New York.

The California native shot to fame in 2014 when the Stockton Police Department posted his mugshot on their website, following his arrest for gang activity and a misdemeanour charge of resisting/obstructing justice.

The photo promptly went viral, with internet users dubbing him ‘the hottest convict ever’. 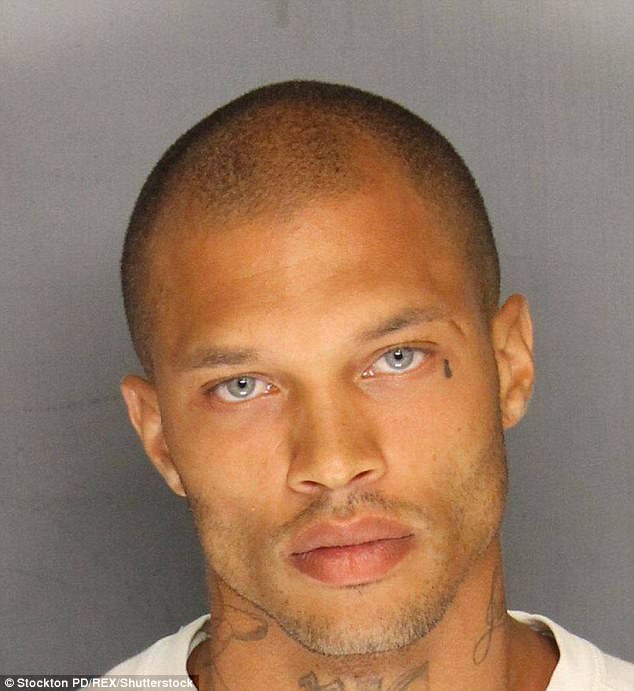 Viral: The California native shot to fame in 2014 when the Stockton Police Department posted his mugshot on their website, following his arrest for gang activity and a misdemeanour charge of resisting/obstructing justice