GKN’s owners were in a standoff with MPs last night as a cross-party backlash grew against the decision to close its last British automotive plant.

Critics accuse Melrose, which bought the engineer in an £8billion hostile takeover in 2018, of forcing through cuts despite earlier pledges to make the firm a ‘UK manufacturing powerhouse’.

It has prompted Darren Jones, chairman of the Commons business, energy and industrial strategy committee, to intervene and call on GKN’s bosses, who were appointed by Melrose, to explain themselves in Parliament.

Jones said: ‘Aerospace and automotive are two of our most significant manufacturing sectors in the UK, employing many thousands of people across the country.

‘My committee is keen to understand the challenges and opportunities post-Brexit and what this means for workers.

‘Some businesses, such as GKN, are investing in aerospace but disinvesting in automotive. It’s important we understand why that’s happening and what it means for the future of British manufacturing.’

The hearing has been arranged under the committee’s ongoing inquiry into the impacts of Brexit on businesses.

However, in a snub to MPs, the request was yesterday rejected by the company – setting the stage for a tense showdown.

If the executives continue to refuse, the committee has powers to compel them to appear.

Critics also wanted to know why Melrose chief executive Simon Peckham and vice chairman Christopher Miller had not been called to the committee.

Street has said the decision to close the car component factory in Birmingham goes ‘entirely against the spirit’ of Melrose’s promises three years ago.

It is feared the closure will also hamper efforts to make the Midlands a leading hub of electric car manufacturing in future, dealing a blow to the Government’s industrial strategy.

The Melrose mantra towards acquiring businesses is ‘buy, improve, sell’. However, bosses previously told the business committee that they would act like long-term investors.

GKN insists the automotive plant in Birmingham, which counts Jaguar Land Rover among its customers, is no longer globally competitive – and work done there will be transferred to Europe. One industry expert said the move puts ‘another nail in the coffin’ of the UK’s car industry.

Labour’s Jack Dromey, the local MP for Birmingham Erdington, said: ‘As the industry seeks to recover from a huge fall in production in 2020 and looks towards a transition to electric vehicles, the loss of GKN would be a serious blow. 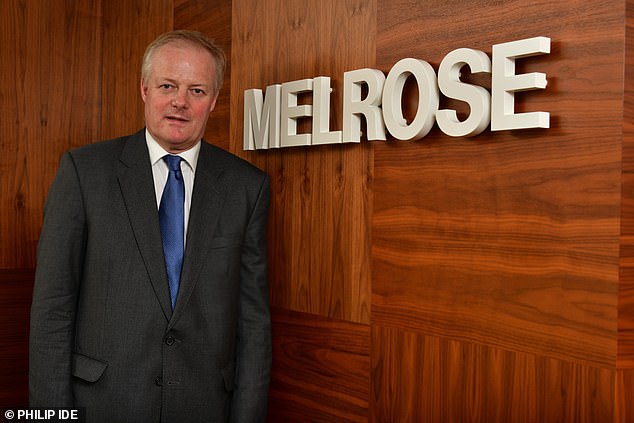 No show: Critics also wanted to know why Melrose chief executive Simon Peckham (pictured) and vice chairman Christopher Miller had not been called to the committee

‘It is right that GKN are being called to give evidence in Parliament following their shameful decision to announce the closure of the GKN plant in Erdington – a crucial part of the automotive supply chain, supplying components into car plants across the country. ‘To add insult to injury, the firm first sacks 519 workers and then refuses to justify why to Parliament.

‘GKN cannot be allowed to treat employees and Parliament with contempt – if the company fails to give evidence to the select committee then Melrose must come forward to justify why they have broken the promises they made.’

Melrose insists it has kept promises made at the time of the 2018 takeover.

A GKN spokesman claimed the company’s bosses had refused the select committee’s invitation because they will be represented by industry group the SMMT, ‘as is usual for these engagements’.