Melting glaciers could cause the next pandemic, study says

Glaciers that are melting amid rising global temperatures could be the cause of the next deathly pandemic, a new study claims.

Scientists investigated how climate change may affect the risk of ‘spillover’ – a virus jumping to another species – by examining samples from Lake Hazen in the Arctic.

They found that the chance of a spillover event increases with the melting of glaciers, as the meltwater can transport pathogens to new hosts.

Killer viruses that have been frozen in glaciers for hundreds of years could reawaken as temperatures rise and the ice melts and flows to new locations.

Viruses need hosts like humans, animals, plants or fungi to replicate and spread, and occasionally they can jump to a new one that lacks immunity, as seen during the Covid pandemic.

A warming climate could bring viruses in the Arctic into contact with new environments and hosts, increasing the risk of this ‘viral spillover’, the experts warn.

Researchers in Canada wanted to investigate how climate change might affect the risk of ‘viral spillover’ by examining samples from the Arctic landscape of Lake Hazen. The experts are pictured at Lake Hazen drilling holes to collect sediment 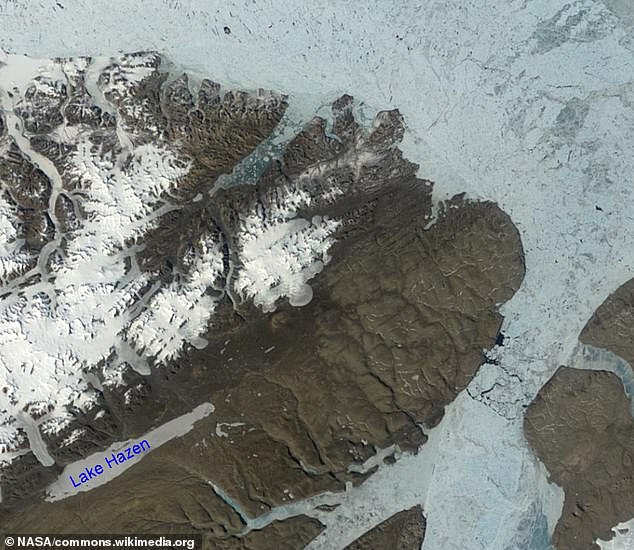 Lake Hazen, seen from above in this NASA image, is the largest High Arctic freshwater lake in the world

WHAT IS A VIRAL SPILLOVER?

A ‘spillover’ event describes a virus’s jump from one species to another.

An example is the spillover of SARS-CoV-2, the virus that causes Covid, from a bat or pangolin to a human.

A spillover contrasts with a ‘spillback’ – a virus going from humans back into wild animals.

The new study was led by researchers at Department of Biology, University of Ottawa in Canada and published in Proceedings of the Royal Society B.

‘Spillover risk increases with runoff from glacier melt, a proxy for climate change,’ say the researchers in their paper.

In the past years, many viruses such as Influenza A, Ebola and SARS-CoV-2 (the virus that causes Covid) spilled over to humans and caused ‘significant diseases’, the study says.

Likewise, it’s thought the lethal outbreak of the Ebola virus in Western Africa between 2013 and 2016 stemmed from bats.

The researchers focused their study on soil and lake sediments from Lake Hazen, the largest High Arctic freshwater lake in the world.

The team sampled soil that becomes a riverbed for melted glacier water in the summer, as well as the lakebed itself, which required clearing snow and drilling through more than six feet of ice.

They used ropes and a snowmobile to lift the lake sediment through almost 980 feet (300 metres) of water, and samples were then sequenced for DNA and RNA, the genetic blueprints and messengers of life.

‘This enabled us to know what viruses are in a given environment, and what potential hosts are also present,’ said study leader Stephane Aris-Brosou, an associate professor in the University of Ottawa. 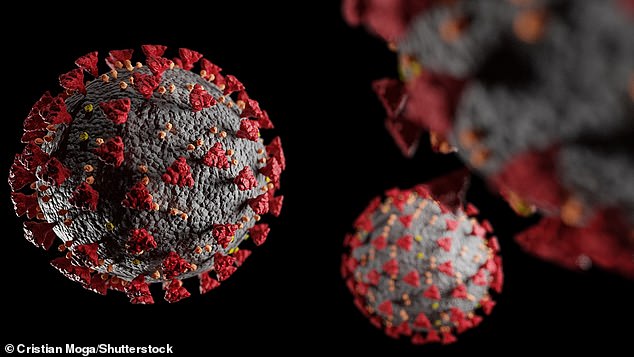 In the past years, many viruses such as Influenza A, Ebola and SARS-CoV-2, the virus that causes Covid, spilled over to humans and caused ‘significant diseases’, the study says. Pictured is a rendering of SARS-CoV-2

WHAT IS GLACIAL RUNOFF?

Glaciers are slowly moving rivers of ice, formed by the accumulation and compaction of snow on mountains or near the poles.

Glacier runoff means all melt and rain water that runs off the glacierized area without refreezing.

Global warming is expected to increase runoff at Lake Hazen in the Arctic, researchers say.

But to find out how likely they were to jump hosts, the team needed to examine the equivalent of each virus and host’s family tree.

‘Basically what we tried to do is measure how similar these [family] trees are,’ said study author Audree Lemieux.

Similar genealogies suggest a virus has evolved along with its host, but differences suggest spillover, and if a virus has jumped hosts once, it is more likely to do so again.

The analysis found pronounced differences between viruses and hosts in the lake bed, which is directly correlated to the risk of spillover.

The difference was less stark in the riverbeds, which the researchers theorise is because water erodes the topsoil, removing organisms and limiting interactions between viruses and potential new hosts.

Those instead wash into the lake, which has seen ‘dramatic change’ in recent years, as increased water from melting glaciers deposits more sediment.

‘That’s going to bring together hosts and viruses that would not normally encounter each other,’ Lemieux said.

Also, animals and protists were found to be the most susceptible to spillovers, while plants and fungi showed a lower susceptibility to spillovers.

The experts stress that they are neither forecasting an actual spillover nor a pandemic, and that the likelihood of such an event ‘remains very low’.

They also warn more work is needed to clarify how big the difference between viruses and hosts needs to be to create serious spillover risk. 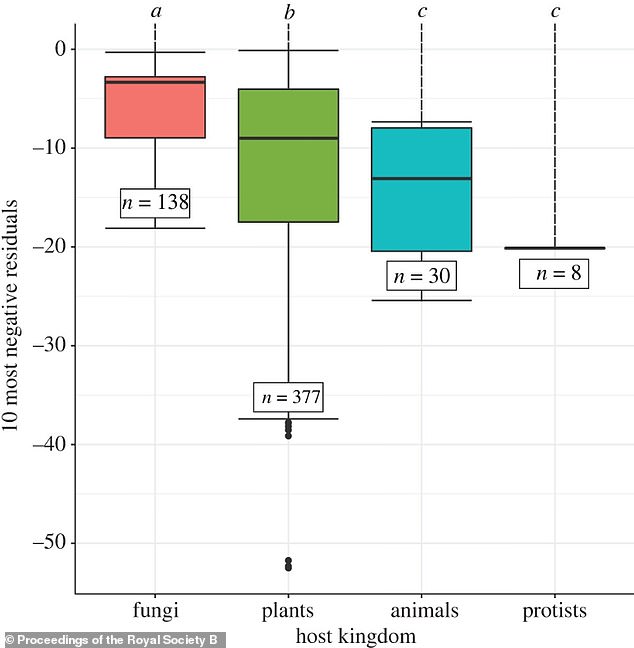 Animals and protists are the most susceptible to spillover, while plants and fungi showed a lower susceptibility to spillovers

But they argue that warming weather could increase risks further if new potential hosts move into previously inhospitable regions.

‘It could be anything from ticks to mosquitoes to certain animals, to bacteria and viruses themselves,’ said Lemieux.

‘It’s really unpredictable… and the effect of spillover itself is very unpredictable, it can range from benign to an actual pandemic.’

The team now wants more research and surveillance work in the Arctic region to ‘mitigate the impact of spillovers’ on humans and other species.

‘Obviously we’ve seen in the past two years what the effects of spillover can be,’ said Lemieux.

It’s widely believed that SARS-CoV-2, the virus that causes Covid, was spread from wild animals to humans.

But a 2022 study claims that humans might give viruses to animals more often than previously understood.

Researchers reviewed published evidence of human-to-wildlife transmission events, with a focus on how such events could threaten animal and human health.

They found a total of 97 examples of human-to-wildlife transmissions involving a wide range of pathogens, from M. tuberculosis, measles, influenzas and hepatitis B.

These pathogens likely spread from humans to wild animals in multiple ways, such as wild animals’ contact with human sewage.

The study refers to ‘spillovers’ (a virus’s jump from another species) and a spillback (a virus going from humans back into wild animals).