An angry driver has rammed into the back of another vehicle in a road rage incident, and tipped his car onto two wheels in the process.

Dashcam footage captured the confrontation as it unfolded at Exford Road in Melton South, west of Melbourne, on Tuesday afternoon.

A string of cars were seen slowly crossing over the railroad tracks before a red Haval ran into the back of a Proton Jumbuck.

The driver in the truck threw his arm out the window to gesture at the motorist behind him.

Dashcam footage captured the terrifying ordeal as it unfolded at Exford Road in Melton South, west of Melbourne, on Tuesday afternoon

The SUV continued to push into the back of the preceding vehicle before its front wheel mounted the side of the truck, tipping the Haval onto its left wheels before settling back on the ground.

The Haval driver opened the door as if to get out of the car but before being able to get out, the truck took off down the road. 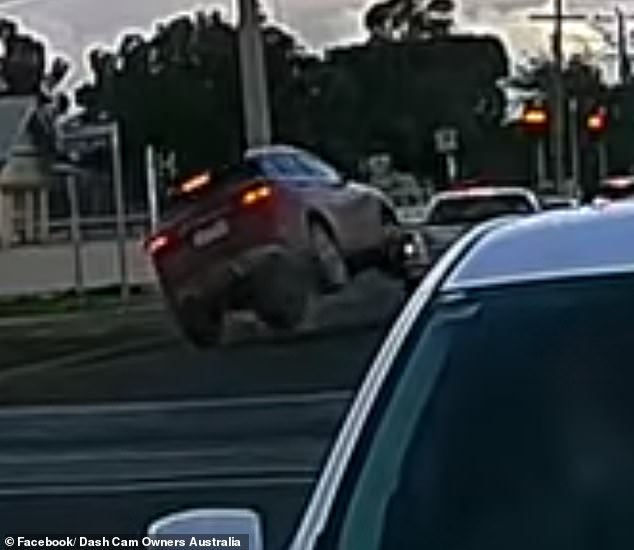 ‘When ya just have to get to the Bunnings Sausage Sizzle!!’ one person said.

Another person commented: ‘The salesman told me this vehicle is a four-wheel drive, nope it couldn’t drive over the ute, I’m taking it back for a refund.’