More than 100 members of a fighter jet squadron are taken off USS Gerald R. Ford as ‘precautionary measure’ the same day a sailor tests positive for coronavirus

About 100 members of a fighter jet squadron were forced to leave the USS Gerald R. Ford after one of its members tested positive for coronavirus, US Navy officials said.

The sailor tested positive for coronavirus on Wednesday, the day before the aircraft carrier departed from Virginia’s Naval Station Norfolk, a Navy spokesperson told Stars & Stripes.

The sailor, who has not been named, is a member of the Strike Fighter Squadron (VFA) 213 – the ‘Fighting Blacklions’ – which flies F/A-18F Super Hornets and is based out of Virginia’s Naval Air Station Oceana.

More than 100 members of the Fighting Blacklions were taken off the USS Gerald R. Ford (pictured) after one of the squadron’s sailors tested positive for coronavirus Wednesday

Despite having been in isolation since last week and never actually boarding the USS Ford, the sailor had been in contact with other squadron members.

Although the more than 100 members of the Fighting Blacklions were medically-screened for coronavirus and none displayed flu-like symptoms before boarding the carrier Tuesday, they were still made to disembark Wednesday.

The squadron members were then put under ‘precautionary restriction of movement’ until additional medical screening and contact tracing could be carried out, the Navy spokesperson told Task & Purpose.

‘Due to USS Gerald R. Ford’s strict COVID-19 mitigation measures, the risk of exposure or transmission to additional personnel is believed to be low,’ the spokesperson said in an email.

The Navy expects that the majority of the squadron who were taken off the USS Ford will be able to get back to work on Saturday. However, those who had been in close contact with the sailor who tested positive are being quarantine in their homes for two weeks. 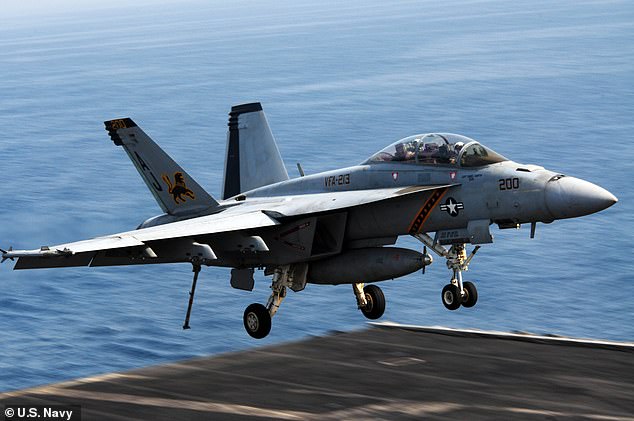 The Fighting Blacklions flies F/A-18F Super Hornets (pictured) and is based out of Virginia’s Naval Air Station Oceana. They were on the USS Ford doing carrier pilot qualifications

The USS Ford had previously had another incident in which a sailor was confirmed to have coronavirus, Task & Purpose reported.

In that case, the sailor tested positive for coronavirus on May 4 and is believed to have caught the virus from a family member. The sailor had not been onboard the ship since May 1.

The ship’s medical staff decontaminated the areas the sailor had been, while any crew members who may have interacted with the sailor were put under precautionary quarantine and have all since been cleared for coronavirus.

The Navy’s plans for deploying its ships during the pandemic include medical screening and quarantine measures, as well as emphasizing wearing face coverings, social distancing and frequent hand washing.

These measures are expected to be in place ‘for a lengthy period,’ officials said.

The Navy has had almost 2,400 coronavirus cases since the pandemic began and is the hardest hit by the virus of America’s military branches.

The USS Ford – the world’s largest aircraft carrier – is in the midst of carrier pilot qualifications in the Atlantic Ocean. It is expected to be deployed in 2022.