Able Seaman Just Nuisance is the only dog ever to have been enlisted in the Royal Navy, serving from 1939 to his death in 1944

The only dog to ever officially sign up to join the Royal Navy has had a statue to his memory outside a former British World War 2 base where he served faithfully  desecrated by scrap metal thieves.

The infamous Great Dane called Just Nuisance was enlisted in 1939 when ‘volunteers’ were needed in the fight against Germany and proudly did his duty until his tragic death after being hit by a car in 1944.

He was buried with full military honours including a firing party over his grave and a bugler played the Last Post.

The news of his death was even transmitted to every British ship and naval base in the world.

In honour of the gigantic hound, who was befriended by thousands of sailors during his service at the then vital British naval base in Simon’s Town, South Africa, a large bronze statue of him was cast.

It stands on Jubilee Square outside his former military home, but now the bronze copy of his former RN cap and collar which lay in front of his paws on the statue have been chiselled off and probably sold for scrap.

They were not attached to the statue of Just Nuisance himself that sits atop a granite boulder, because he never liked wearing them.

There are also fears that the scrap metal thieves may return to steal the whole statue and melt it down for scrap cash. 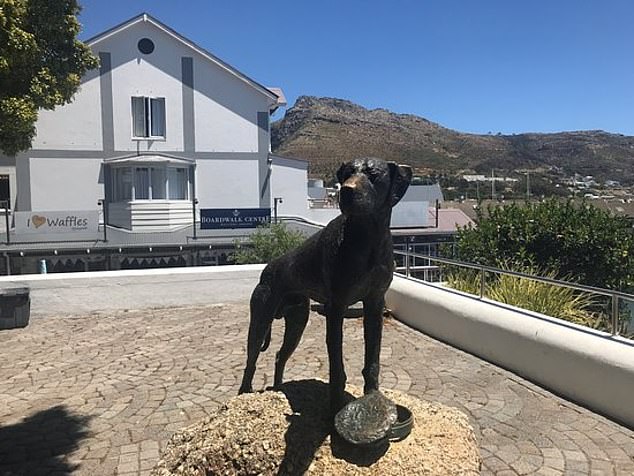 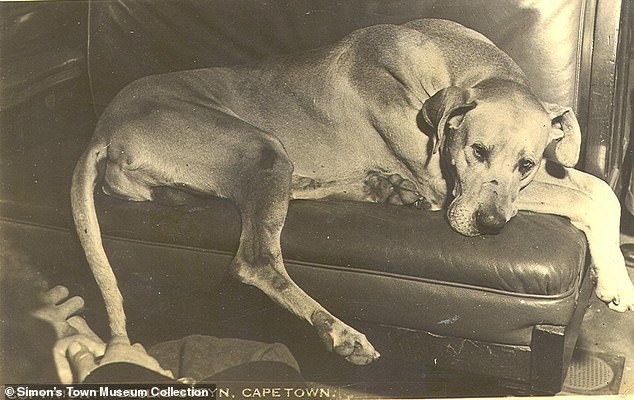 The theft has brought outrage to the naval town and a reward has been put up to catch those responsible.

News of the theft will bring anger to locals and the generations of British sailors who know the Great Dane’s remarkable story.

Just Nuisance was enrolled into the British Navy after being threatened with being put down by the local railway company for accompanying serving sailors on the train into Cape Town to visit local bars.

Dogs were not allowed on the train for free and although the sailors tried to hide the dog, which stood at two metres tall on his hind legs, it was not always possible and he was often thrown off the train by ticket inspectors.

Just Nuisance however had learned how to work the railways and would just wait for the next train and hop on it and join other sailors on their way into Cape Town. 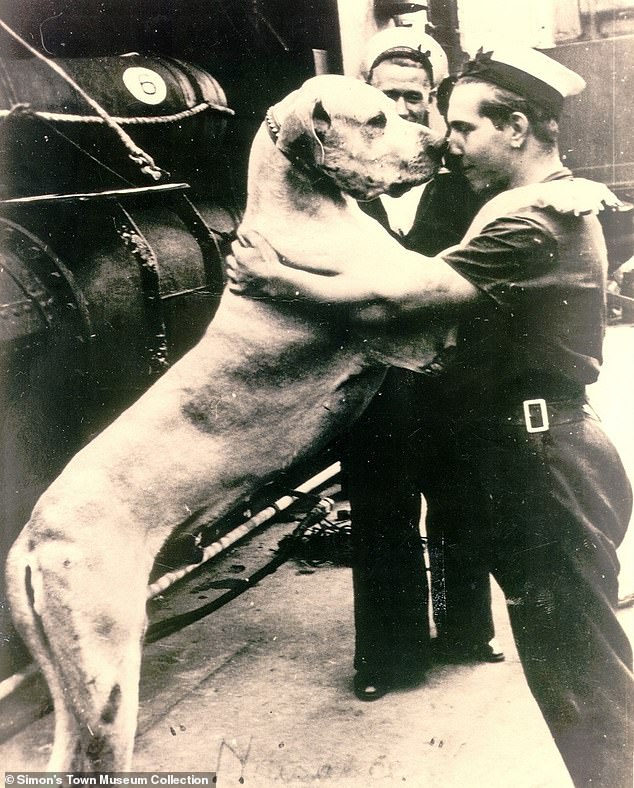 A naval officer touches noses with Just Nuisance. The dog befriended thousands of sailors who would pass through the naval base during the war

He would accompany them to pubs, clubs and concerts in Cape Town and then round them up when it was time for the last train back home to Simon’s Town before escorting them safely to their ships.

Exasperated railway chiefs warned the sailors that if they caught the fare dodger on the train again he would be put down, so to save him the sailors appealed for help from their shore base Commander-in-Chief.

After much thought, Commander Charles Shakespeare decided to enlist Just Nuisance into the Royal Navy as an Ordinary Seaman with the trade of ‘Bone Crusher’ and the religious denomination of ‘Scrounger’. 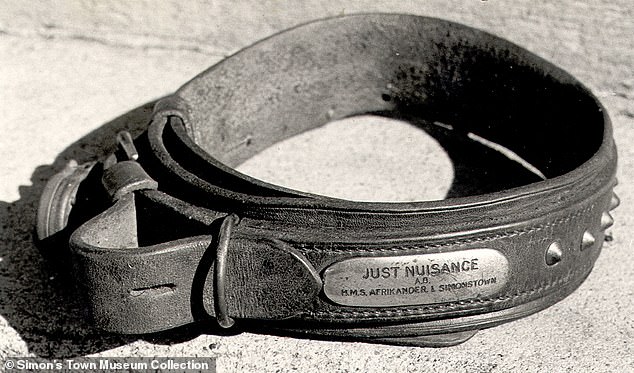 Just Nuisance’s official RN collar with his name and rank. By becoming a bona-fide member of the Royal Navy on August 25, 1939, he received full sailors rights

He underwent and passed a full medical and had to sign his enlistment papers with a giant paw print.

And by becoming a bona-fide member of the Royal Navy on August 25, 1939, he received full sailors rights.

This meant he received a pass that entitled him to free rail travel and his Royal Navy pass was attached to his collar infuriating the railway chiefs who could no longer stop Just Nuisance travelling on their trains.

The cunning Commander’s move to officially enlist him into the navy thwarted the South African Railways & Harbours company and meant he could travel legally and the ticket inspectors could do nothing about it.

In 1940 he got his first official posting to the shore base HMS Afrikander at the Simon’s Town base which oversaw the needs of all the Royal Navy’s visiting ships. 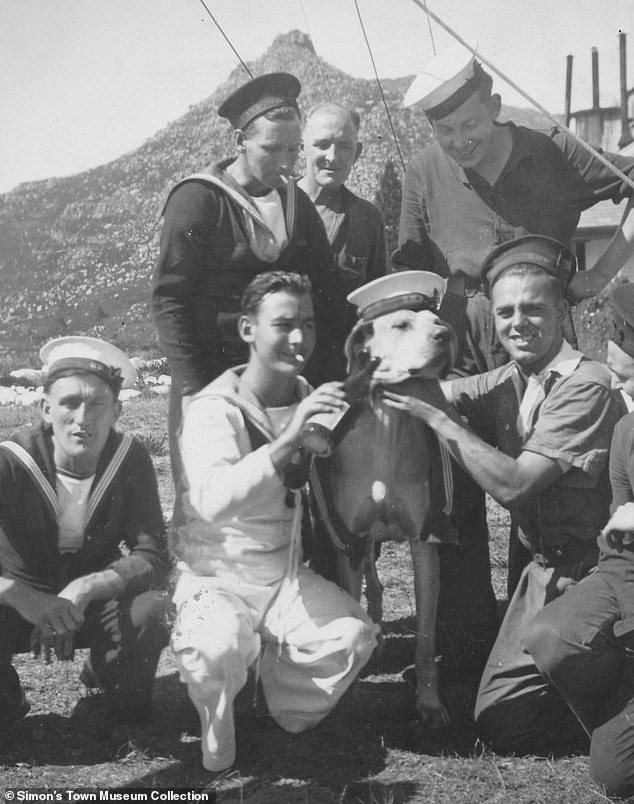 Sailors pose with Nuisance as, but he refuses the offer of a drink from a bottle

His popularity among sailors in raising morale led to him being quickly promoted to Able Seaman which entitled him to full rations and he was given his own bunk bed with fellow sailors at HMS Afrikander.

He also had a sailor assigned to him to make sure he was walked and fed and groomed every day and he was assigned a bed at the Union Jack Club in Cape Town to stay in case he ever missed the last train home.

Whilst a ‘sailor’, Just Nuisance had a ‘marriage’ to another Great Dane called Adinda. 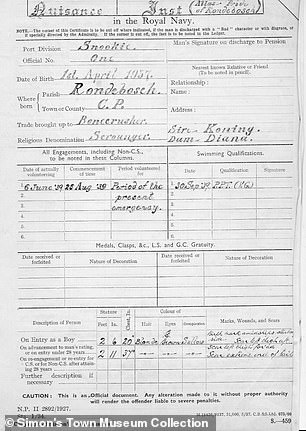 The front page of Nuisance’s official enlistment papers. In 1940 he got his first official posting to the shore base HMS Afrikander at the Simon’s Town base

The pair had a litter, from which two of their puppies, Victor and Wilhelmina, were auctioned off by the Mayor of Cape Town to raise cash for war funds.

But Just Nuisance was no angel and his ‘Conduct Sheet’ shows several misdeeds including sleeping on a bed in the Petty Officer’s dormitory, going AWOL, and refusing to leave public houses at closing time.

In a more serious misdemeanour he was found to have killed the mascot dogs of HMS Shropshire and HMS Redoubt, and was deprived of bones for seven days as punishment and warned not to fight with other dogs again.

Although Just Nuisance did not go to sea he would be taken to the airfield at Wingfield where – although totally illegal – he was taken up by the Fleet Air Arm to carry out anti-submarine patrols.

He got his name Just Nuisance as he would sleep at the top of the gangplanks leading onto the ships where sailors would berate him saying ‘You’re just a nuisance, why do you have to lie here of all places’.

Just Nuisance lived out the rest of his career at HMS Afrikander before being discharged on January 1, 1944, after being hit by a car which caused a thrombosis that was slowly paralysing him.

On April 1, 1944, his 7th birthday, the Naval Surgeon at Simon’s Town Naval Hospital put him to sleep and sailors were recorded as being seen openly in tears as the base came to a standstill at his loss.

The following day at 11.30am his body was wrapped in a canvas bag covered with a Royal Naval Ensign flag and he was laid to rest with full military honours at Klaver Camp overlooking his old base.

A firing party of the Royal Marines fired shots over his grave and a lone bugler played Last Post and a granite gravestone was laid to mark the final resting place of the only dog to ever officially serve in the British navy. 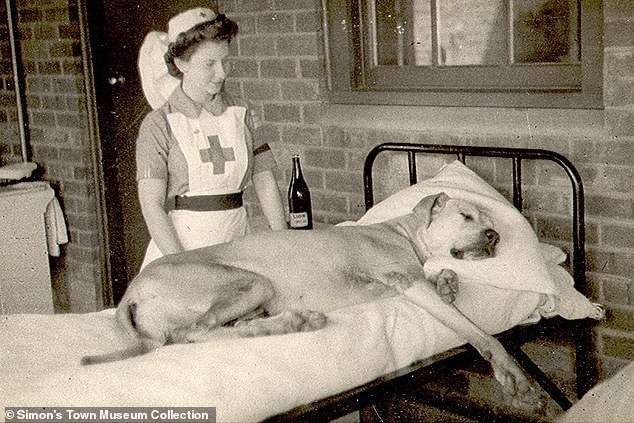 Just Nuisance being tended to by a nurse after being knocked down by a car at the naval hospital in Simon’s Town. He later died from his injuries 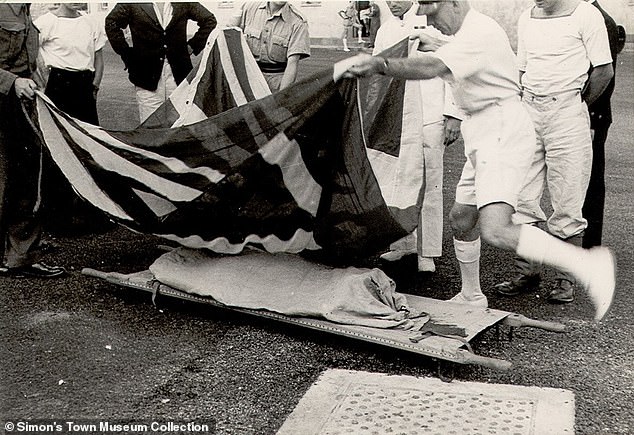 News of his early death was transmitted to every British ship and naval base in the world as many of the ships on active service would have called in at Simon’s Town and their sailors all adored Just Nuisance.

His passing caused genuine grief throughout the Royal Navy at the time as he had become a wartime legend.

A special section in the Simon’s Town Museum holds a collection of all his official papers as well as his collar and RN naval cap along with hundreds of photographs of him with sailors. 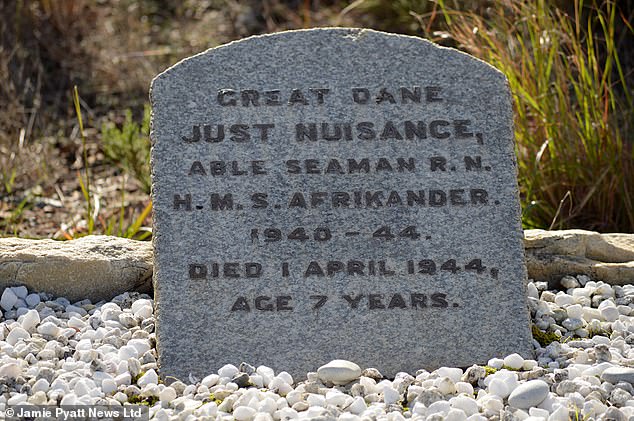 The gallant sea dog had left his paw prints on history but news of the bronze statue, made by sculptor Jean Doyle and erected in 1985, being desecrated for scrap has brought huge anger for the local community.

Cathy Salter-Jansen, curator of the Simon’s Town Museum said: ‘It is a total disgrace and all the more sickening to know what was stolen will be sold for drug money and the scrap sent on to China.

‘I am now very worried that whoever did it will come back and try and steal the whole statue.

‘Simon’s Town was a vital British naval base in the Second World War and so many ships stopped here to resupply and for repairs, so Just Nuisance would have been known by thousands of British sailors. 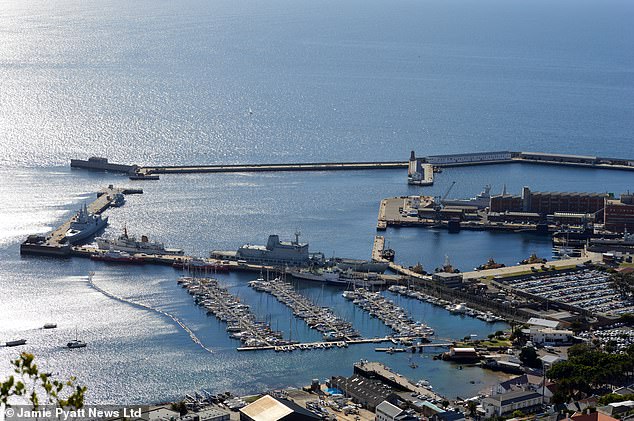 Simon’s Town is 25 miles from Cape Town and first became a British port in the 1790’s, remaining so until 1957 when it was handed over to South Africa. It is now the joint home of their naval fleet

‘His exploits on the train to Cape Town when they went out for beers with the sailors was legendary and he always made sure they got back safe and sound before he put himself to bed in his own bunk.

‘There was genuine grief and tears from sailors and officers throughout the base when he was put to sleep.

‘It is quite remarkable to think that in the middle of the war a message was sent to every single British naval ship and shore establishment wherever it was to break the news of Just Nuisance’s death’ she said.

A South African Police Service spokesman confirmed that a case of theft was being investigated.

Simon’s Town is 25 miles from Cape Town and first became a British port in the 1790’s, remaining so until 1957 when it was handed over to South Africa.

It is now the joint home of their naval fleet.