Men account for up to 68% of coronavirus cases, research suggests

More men than women seem to contract coronavirus, several recent studies of patients at the heart of the outbreak suggest.

Among the Wuhan University hospital patients documented in one study, 54 percent were men. Another earlier study of hospitalized patients was made up of 68 percent men, Business Insider reported.

Researchers are now trying to determine what it is that makes men more susceptible – or seems to protect women and children.

So far, experts believe the skewed rate could be due to who got the virus first, differing rates of underlying conditions or even the anti-infection capabilities of female hormones.

Coronavirus infection rates have thus far been higher among men than women, leading experts to ponder whether men might be more susceptible due to higher rates of underlying conditions, the protective effects of estrogen, or simply who got the virus first (file)

A study of 138 of the earliest coronavirus patients admitted to a hospital in Wuhan found that 54.3 percent were men.

Over a quarter of all the patients went on to be moved into the intensive care unit (ICU) and more than four percent ultimately died.

Although the youngest patient was 22, the average age was much higher: 56.

The researchers found that nearly half of the coronavirus patients – 46.4 percent – had at least one underlying condition.

More than 33 percent of men in the US have hypertension, while 30.7 percent of  American women do.

Sex differences in diabetes rates in the US vary widely between race.

White men, for example, are at 2.5-times greater risk for the disease than white women. 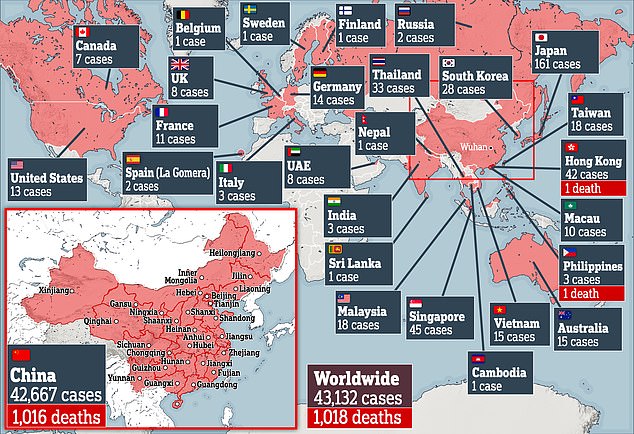 More than 1,100 men and women have succumbed to coronavirus as the outbreak has spread to more than 24 countries worldwide

High blood sugar levels that come with diabetes can eat away at molecules in the immune system that would normally help our bodies fight infection.

Conditions like heart disease are associated with inflammation which can be both an immune response and a state that damages tissues, making them less resistant to infection.

Cancer and cancer treatments may have the same effect.

If SARS – another deadly coronavirus – is to serve as an example, there’s some reason to believe that there’s a pattern among coronaviruses.

When University of Iowa researchers exposed male and female mice to the virus, the males were more likely to contract SARS.

Further tests suggested that estrogen might actually block the virus from infecting cells, but its unclear if the same is true in humans.

There may, of course, be a simpler more obvious explanation.

‘The possible explanation is that the nCoV infection in patients in the previous report was related to exposure associated with the Huanan Seafood Wholesale Market, and most of the affected patients were male workers,’ wrote the Zhongnan Hospital of Wuhan University.

If that proves to be the case, the coronavirus gender gap may vanish as more cases of the infection appear.