Men will face fines of up to £80 if they comment on a woman’s body or appearance in public.

The new proposals put forward to the French government are aimed at combatting the levels of harassment rife on the streets of the country’s cities.

An £80 fine will be issued to anyone who behaves in a manner which ‘infringes the freedom of movement of women in public spaces and undermines self-esteem and the right to security’.

A commuter on roller-blades passes a line of Parisians. Men will face fines of up to £80 if they comment about a woman’s body or appearance in public (file photo)

Politicians have been putting their heads together for a report on how to tackle the issue and define what constitutes ‘sexual outrage’, according to The Local.

This has been the foundation of the plans drawn up to eradicate what is described as everyday sexism in France.

It had been suggested wolf-whistling would be punishable with on-the-spot fines, but the new report makes no reference to it. 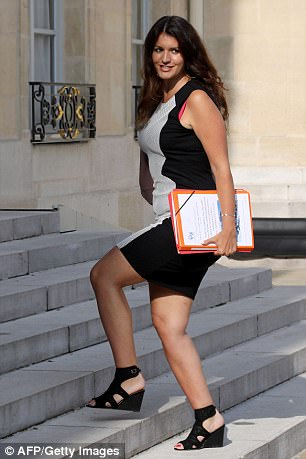 However the planned measures want to give authorities the power to dish out penalties to those who follow women down the street, block their paths or make lout and lewd comments regarding their physique or the way they look.

The issue is heightened on public transport in major cities, with women opting to wear trousers instead of skirts for fear of being groped.

Since the new law has been discussed, a stream of women have come forward to say how they have been sexually assaulted in shops, on the metro and on the streets of Paris.

It is the brainchild of France’s Secretary of State for Equality Marlene Schiappa, who lobbied for what she described as the everyday sexism in France to be addressed.

The bill is expected to be presented to parliament next week after she and two other ministers – Minister of Justice, Nicole Belloubet, and Minister of the Interior, Gerard Collomb – cast their eyes over the final draft.