Associates of slain crime boss Bilal Hamze formed a guard of honour at his grieving mother’s high security housing commission townhouse after he was gunned down outside a ritzy city restaurant.

Two dozen male friends, most of them dressed in hoodies and tracksuit pants, gathered to pay their respects and stand protectively out the front of matriarch Maha Hamze’s home in Auburn, Sydney, on Friday morning.

Sources at the restaurant told Daily Mail Australia Hamze stood out because of the tight white pants he was wearing and the glamorous Kim Kardashian-type’ date joining him for dinner.

The pair, who were the last customers to leave the restaurant, spent over $200 on a Japanese feast including tuna, kingfish sashimi, wagyu beef and barramundi.

Police sources have claimed Bilal was hiding out in the city amid underworld conflict with members of the rival Alameddine clan.

But his ostentatious display at dinner suggests he thought he was safe 23km from his family home.

Onlookers said two gunmen in a black Audi ripped through the laneway connected to Kid Kyoto and fired two shots at Hamze before turning onto Bridge street and shooting at him again.

The wanted man, who had a distinctive tear-shaped tattoo under his right eye, was left screaming on the floor in front of dozens of horrified witnesses including stock exchange traders.

The humble home in Auburn in Sydney’s west was itself a scene of recent bloodshed – and is fitted with security technology more befitting a prime minister’s residence.

The publicly-owned property is protected by at least six CCTV cameras including a private telegraph pole where three devices capture a 360 degree view of the street.

Groups of men lurked near the entrance to the matriarch’s home and in a nearby park, occasionally comforting one another.

The wanted man, who had a distinctive tear-shaped tattoo under his right eye, was left screaming on the floor in front of dozens of horrified witnesses including stock exchange traders. Pictured: Friends of Hamze mourn his death outside his mother’s Auburn home 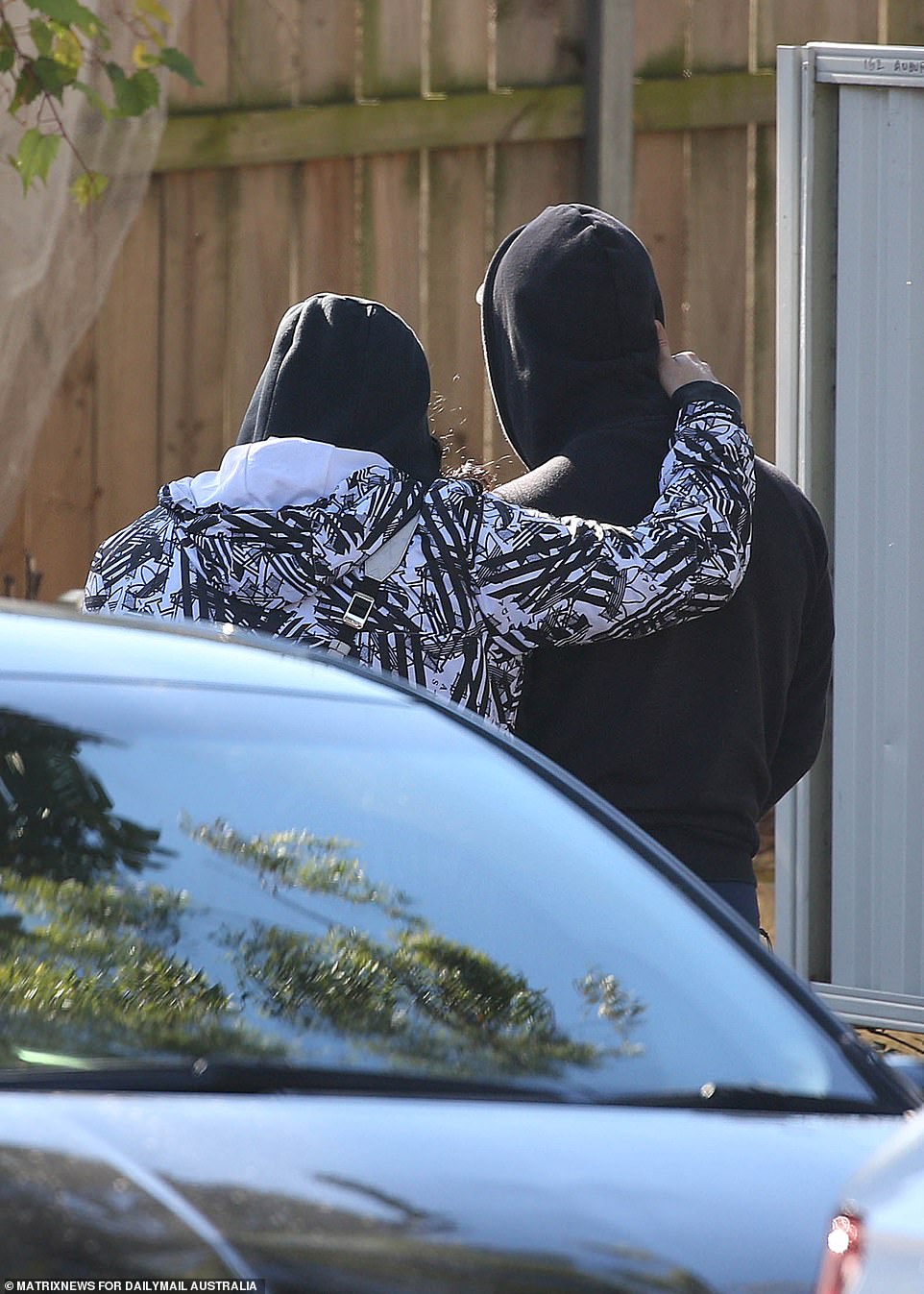 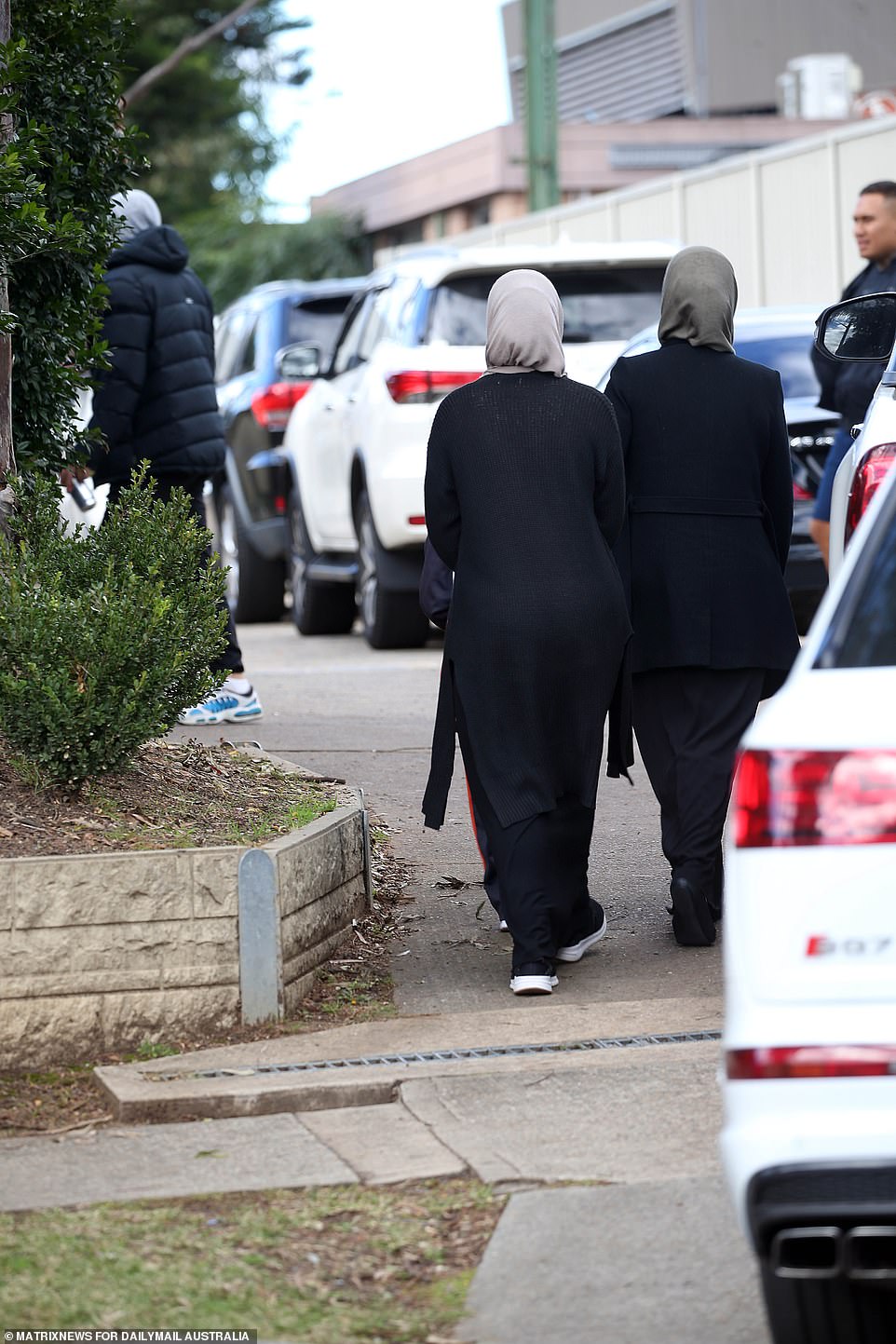 Police sources have claimed Bilal was hiding out in the city amid underworld conflict with members of the rival Alameddine clan. Pictured: Friends and family have descended on the Auburn home of the mother of Bilal Hamze 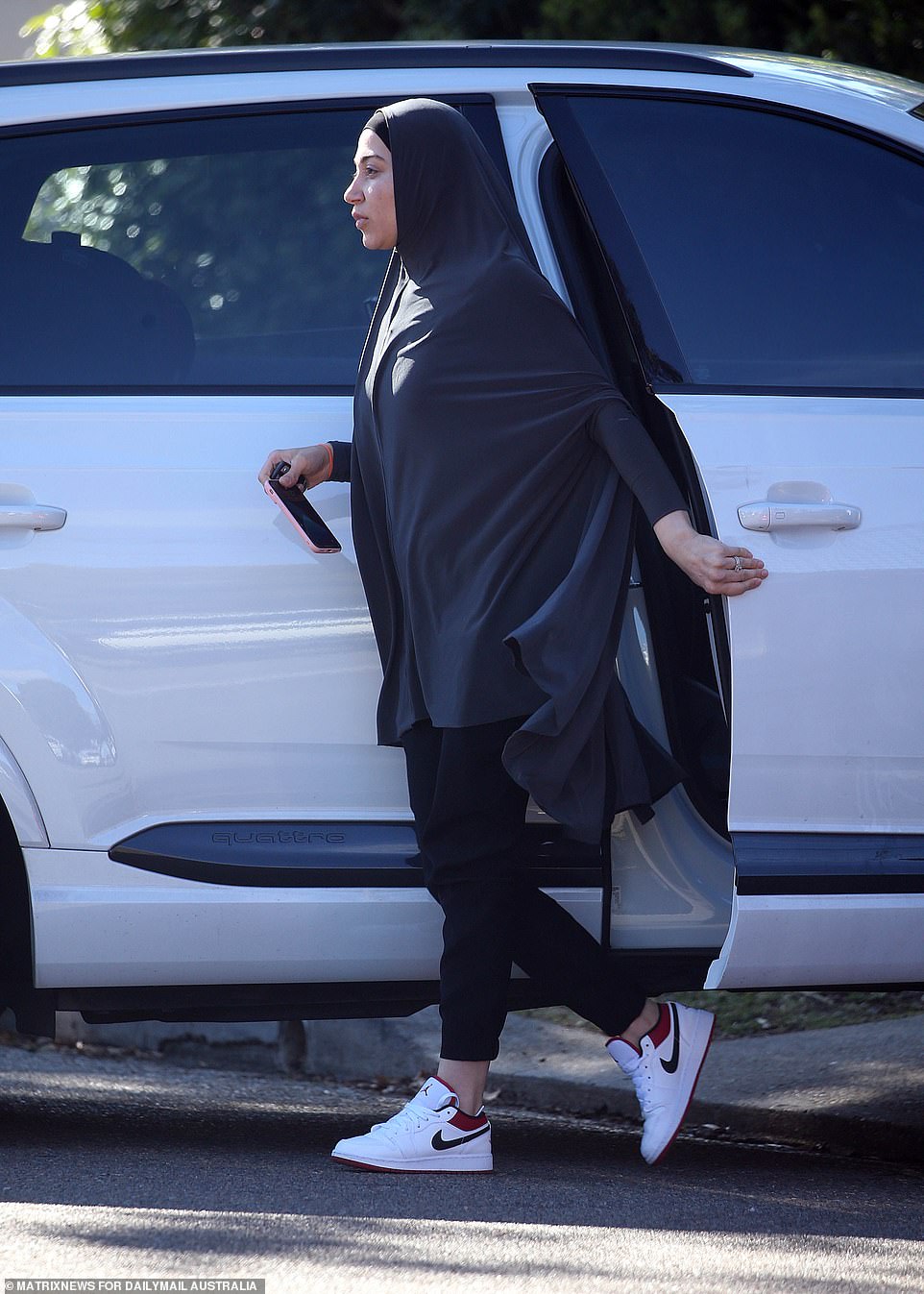 The humble home in Auburn in Sydney’s west was itself a scene of recent bloodshed – and is fitted with security technology more befitting a prime minister’s residence. Pictured: A friend of Hamze arrives at his mother’s house to pay her respects 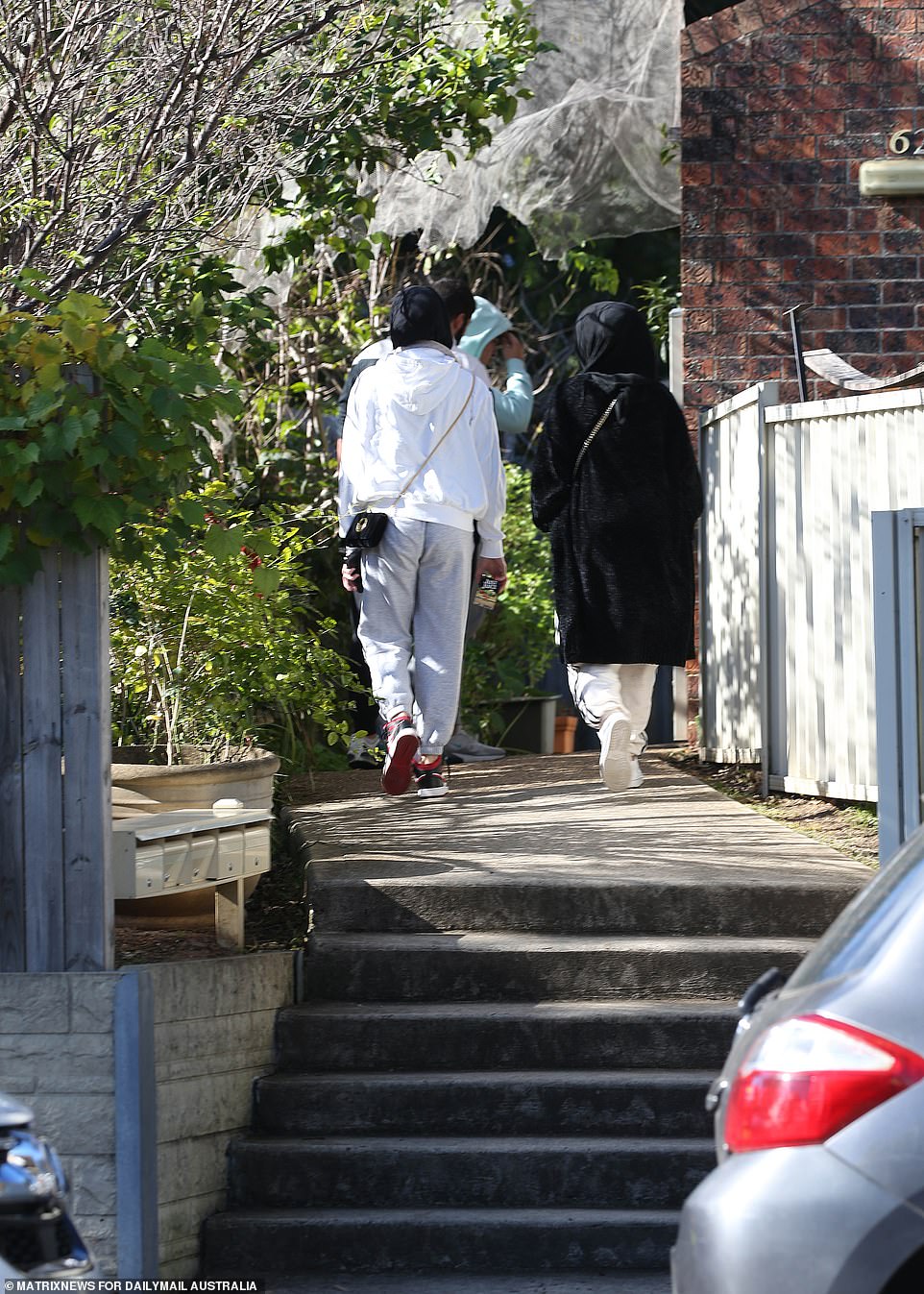 Mourners are seen arriving at Bilal Hazme’s mother’s home in Auburn, in Sydney’s west, on Friday following the news of his assassination 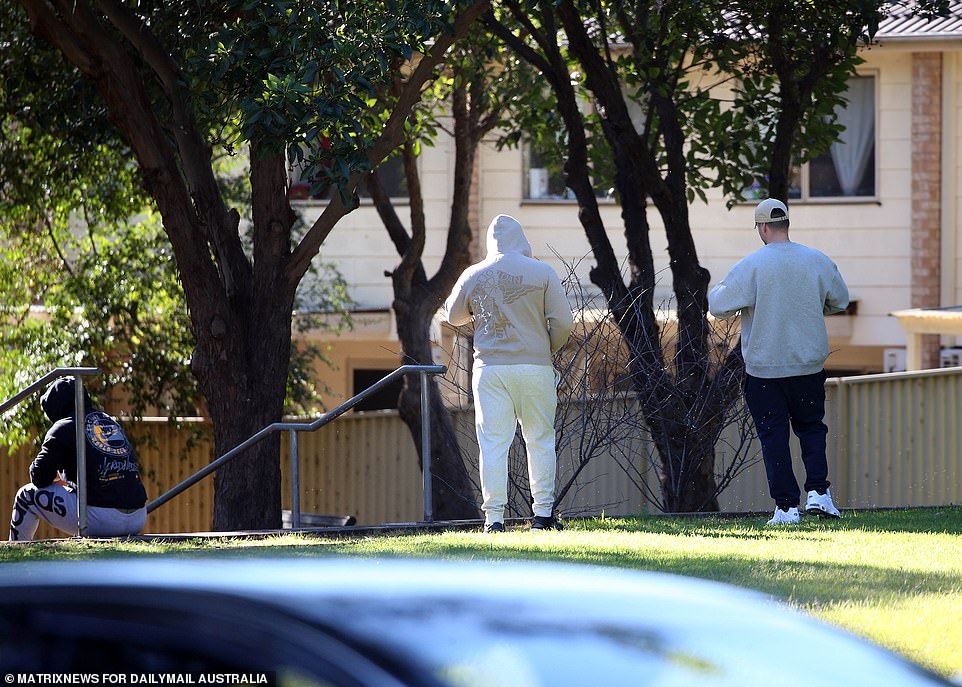 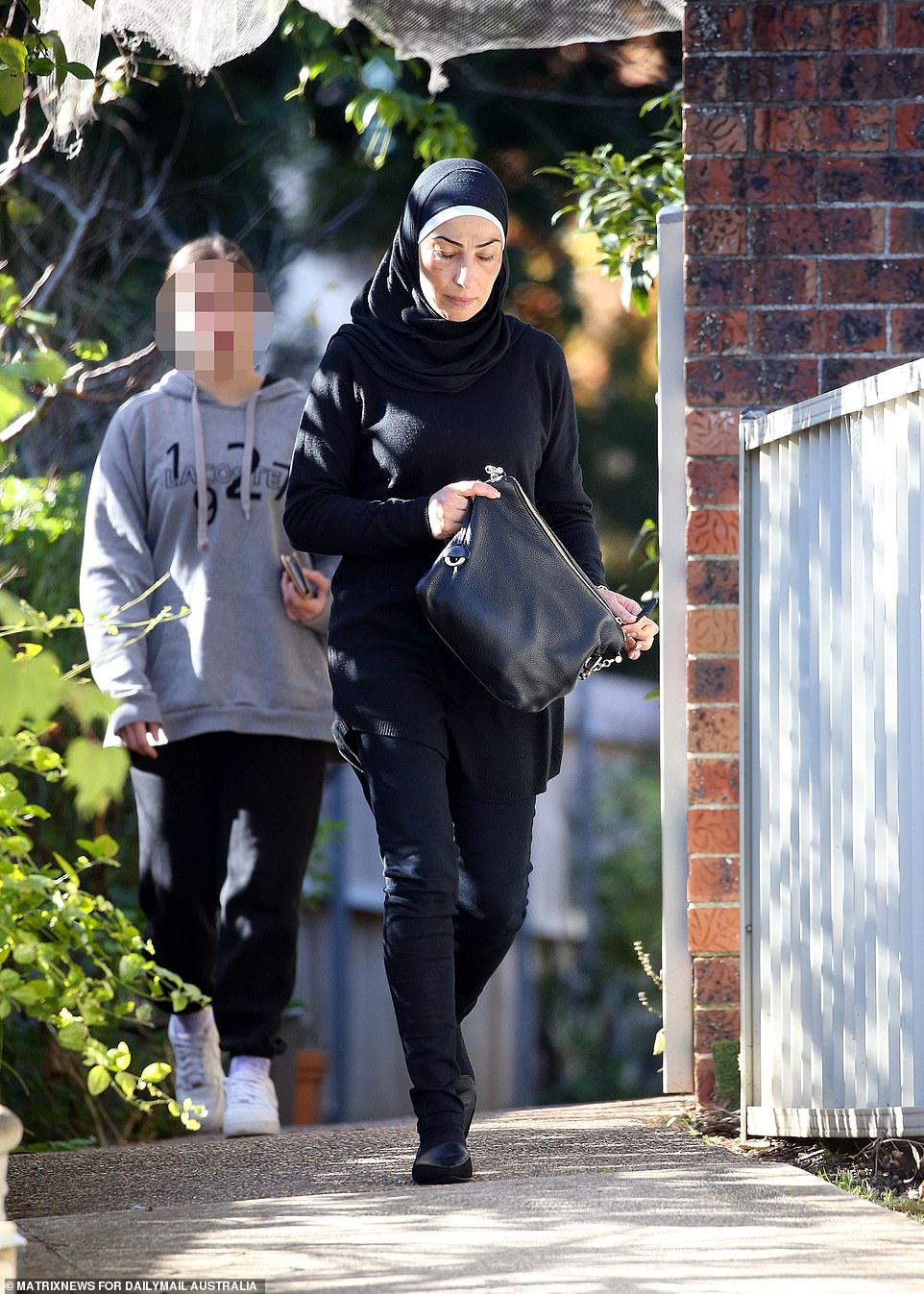 Two dozen friends, most of them dressed in hoodies and tracksuit pants, gathered to pay their respects 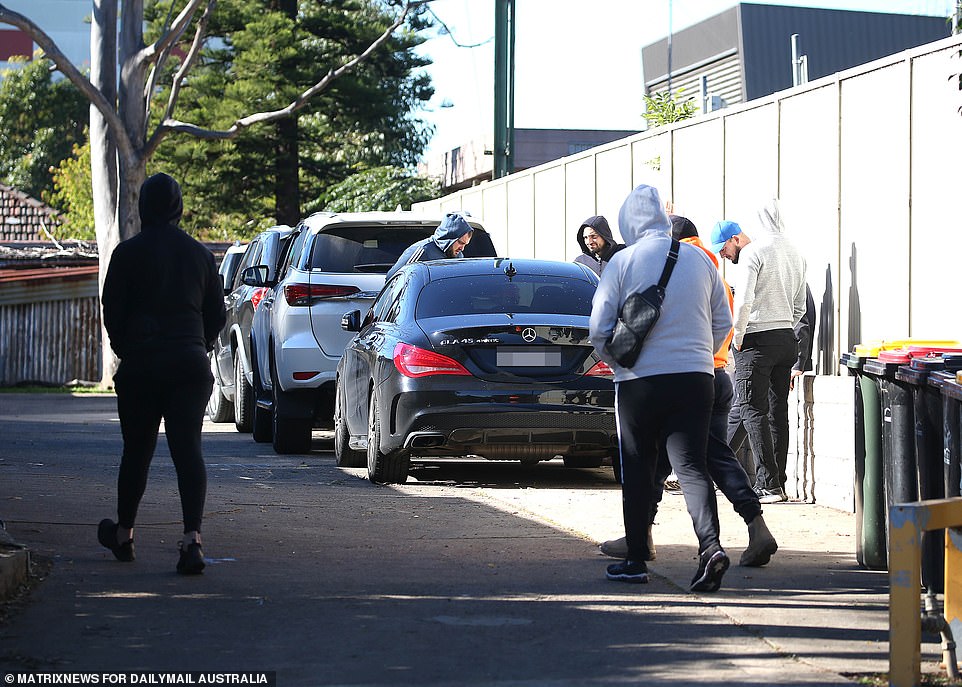 Groups of men lurked near the entrance to the matriarch’s home and in a nearby park, occasionally comforting one another 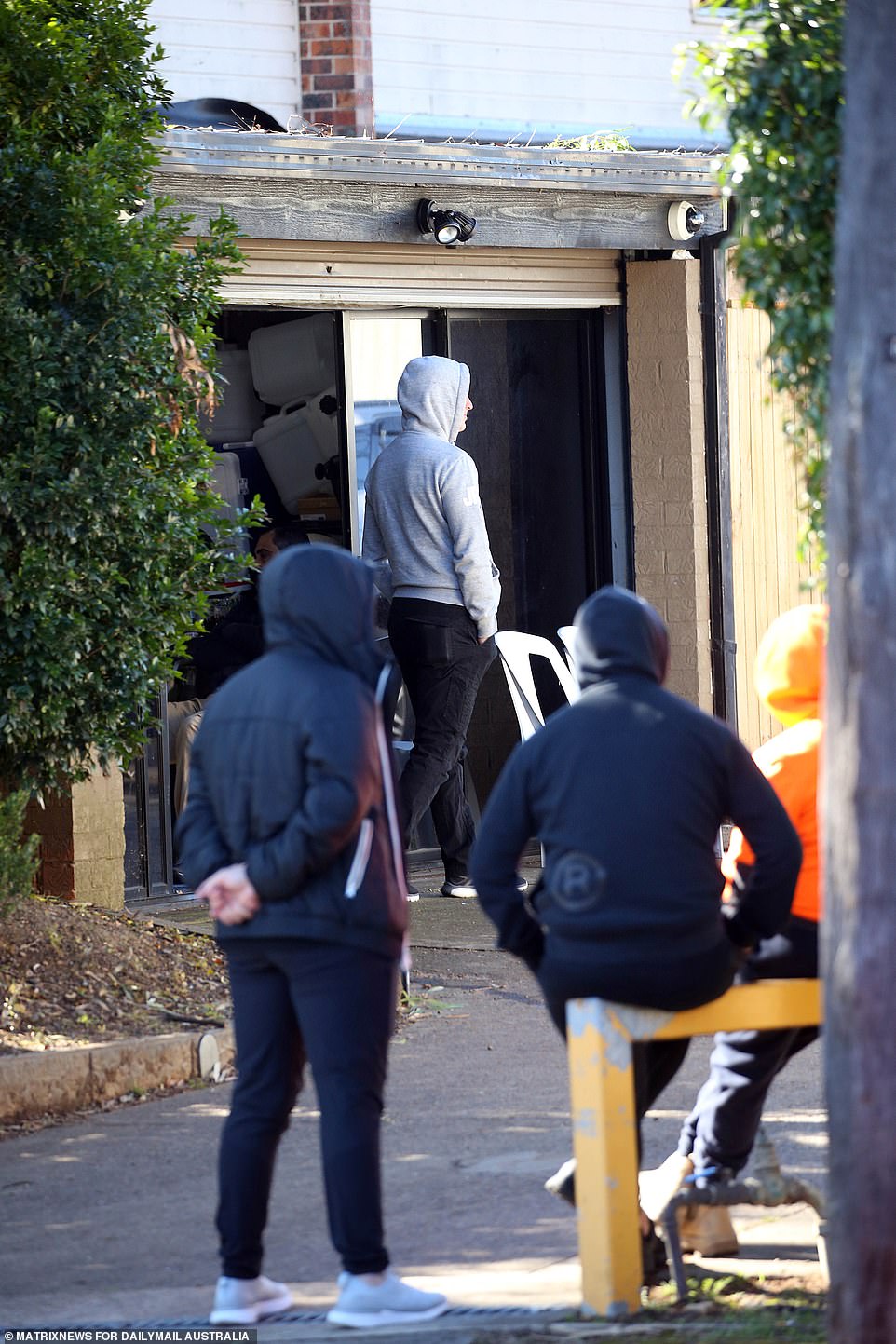 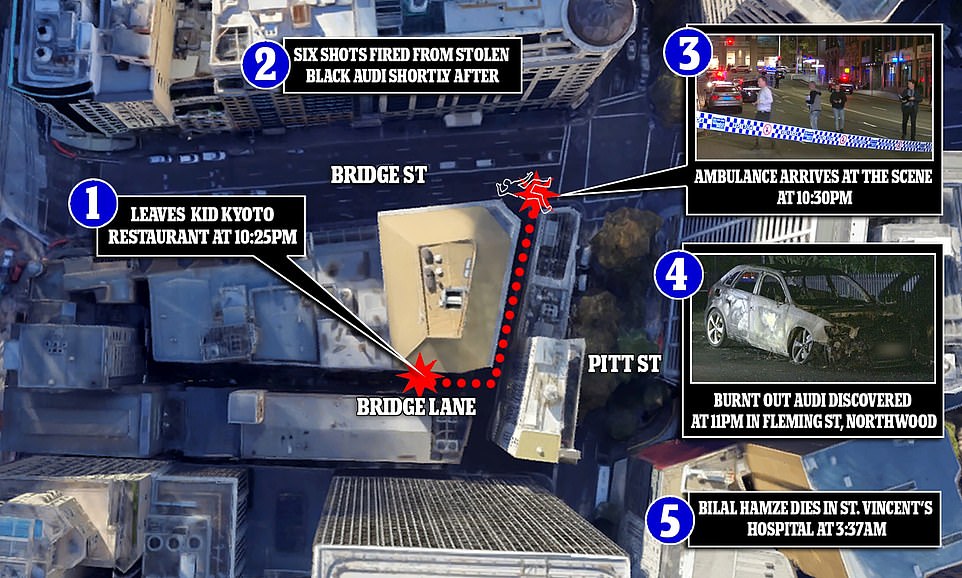 Police cars drove by at least once an hour and as the day went on a queue of Toyota Hiluxes and Audis formed in the driveway.

At one point, a young man arrived, desperately hiding his face from the TV cameras under a fluoro hoodie – and left moments later by jumping the fence and scurrying off into a park.

Most retreated inside a converted garage with blacked out windows when television cameras swooped.

There is reason for the high security: Maha was shot eight times in the leg when the home was shot up in 2013.

The property was likewise the target of a drive by shooting one evening in February. No one inside was injured but a nurse at a nearby hospital was hurt when a stray bullet destroyed a window she was standing near.

An emergency services source on Friday told Daily Mail Australia that Hamze – who had a bounty on his head – was shot twice in the stomach and once in the shoulder after leaving the trendy Japanese restaurant Kid Kyoto.  Witnesses heard ‘five or six gunshots’.

Paramedics struggled to keep Hamze’s organs from falling out in the aftermath of the shooting but he went into cardiac arrest in the ambulance and was unable to be revived at St Vincent’s Hospital.

Police later found the burnt-out wreckage of an Audi RS3, believed to be the getaway car, on a quiet street 17 minutes away in Northwood on the Lower North Shore. 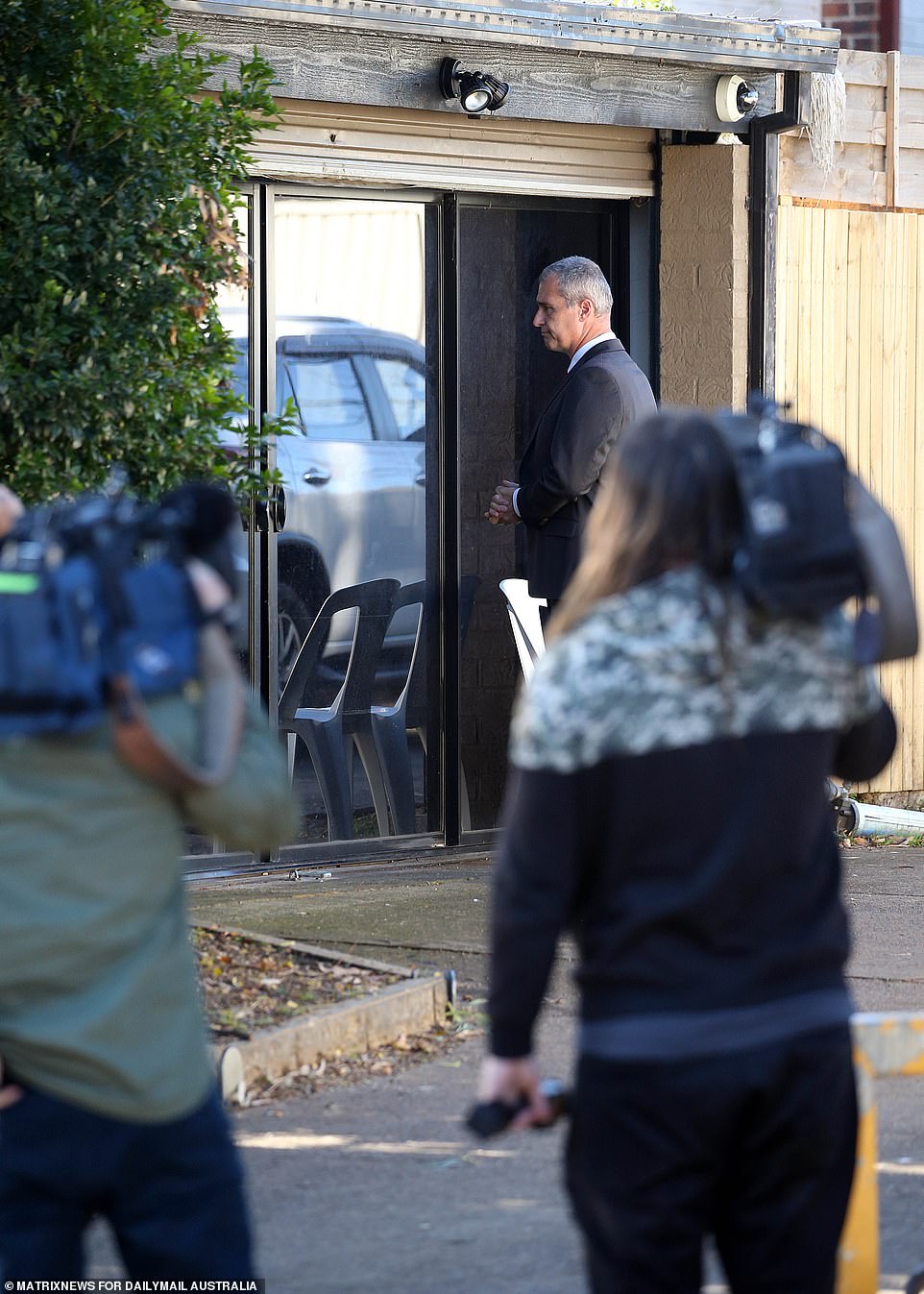 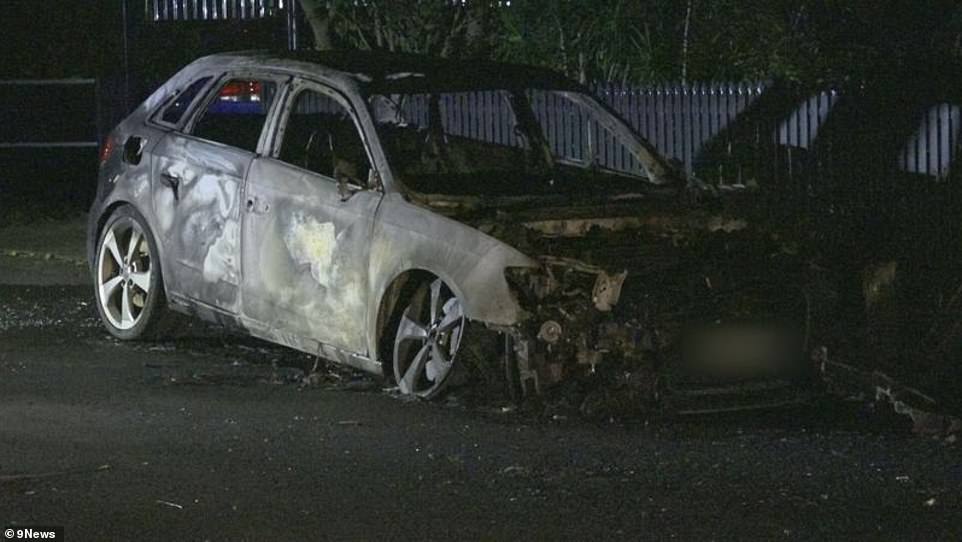 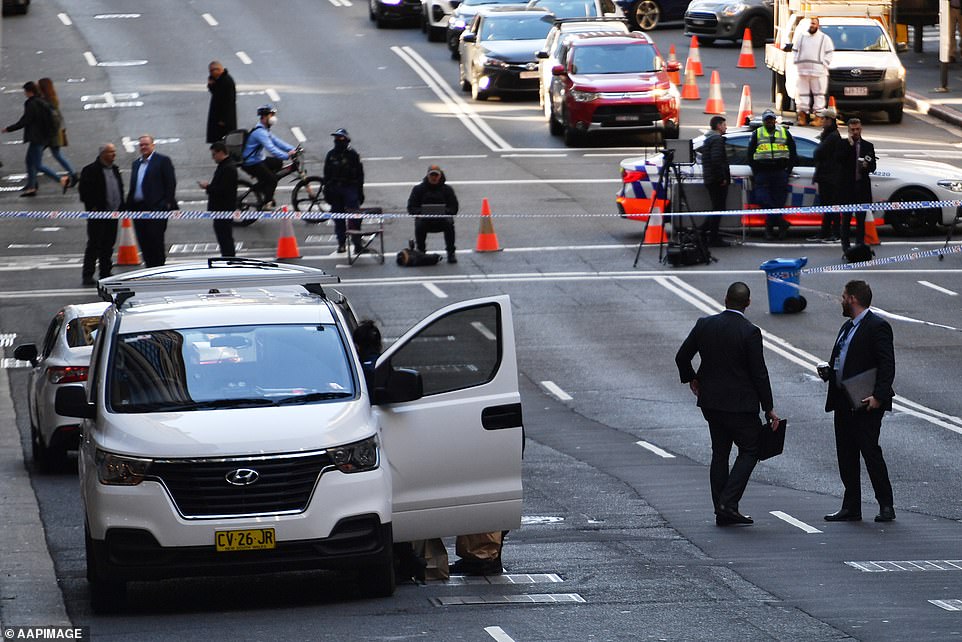 An emergency services source told Daily Mail Australia the gangster was shot in the stomach twice after leaving the popular Japanese restaurant Kid Kyoto. Pictured: Police at the scene on Bridge Street in the CBD on Friday

Criminal Groups Squad Detective Superintendent Robert Critchlow said Hamze had been warned he was a target of a rival.

‘He has been warned that he is at risk, he has been given advice as to his safety,’ Mr Critchlow said on Friday.

‘That advice was not received in the sense it was given. He sought to live his life the way he wanted to and made some choices.

Mr Critchlow said police were ‘certainly concerned’ and had been monitoring the situation.

‘There are regular things that arise in the criminal space that that we act upon quietly and in a way that doesn’t attract attention and we avert a lot of these crimes,’ he said.

‘But ultimately if a violent criminal group wishes to use violence towards another person to achieve their own goals, they will do it. What we do now is gather the evidence and lock them up.’

The NSW Police Riot Squad arrived on the scene shortly before 10am on Friday, with officers dusting two taxis parked inside the cordoned off area.

Officers were also seen examining bullet holes on the side of a building, and putting a black jacket into an evidence bag.

Hamze had reportedly been living in the heart of the CBD in a desperate bid to evade contract killers targeting him. 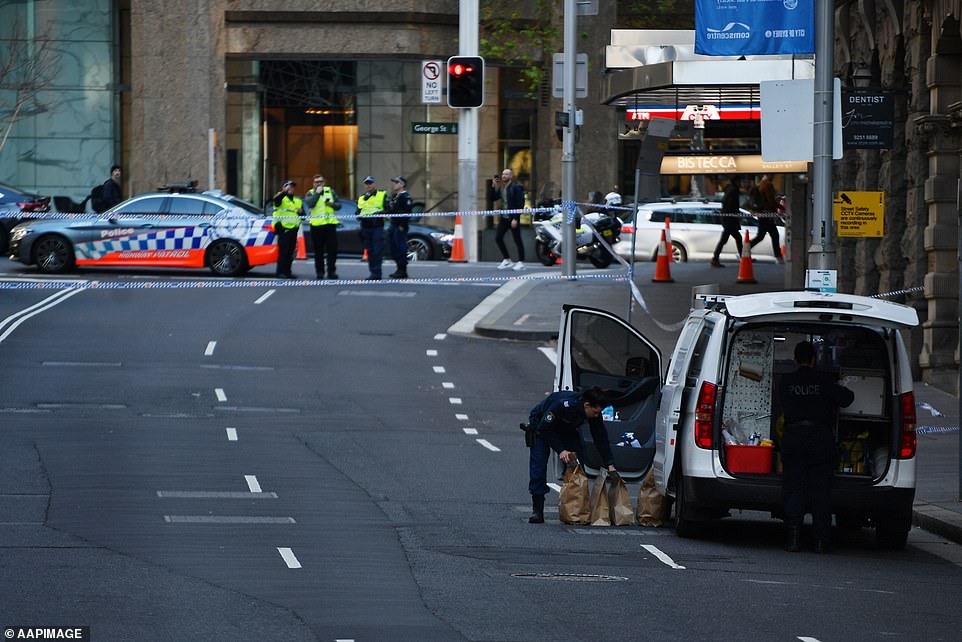 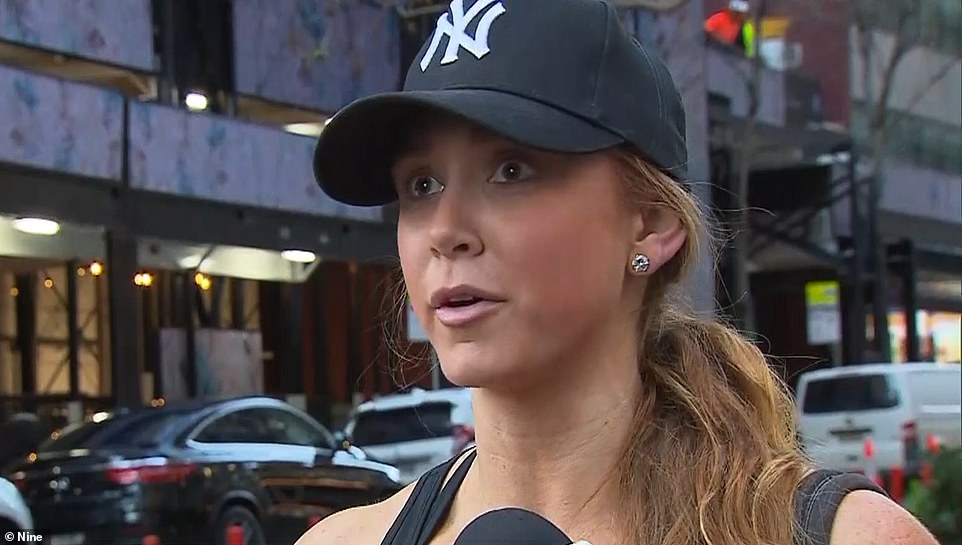 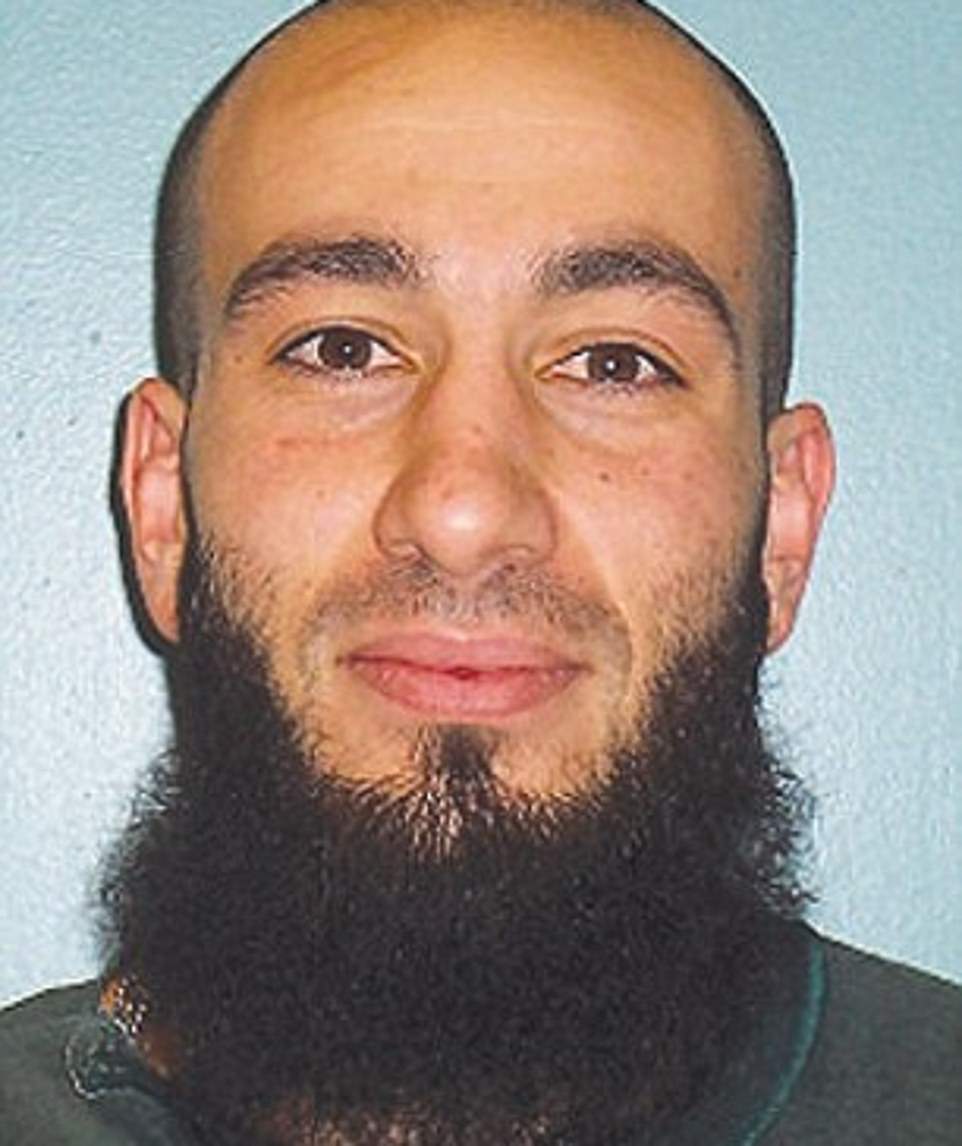 The woman, who is from America, said she was shocked to have witnessed a shooting in Australia.

‘I didn’t think it was [guns] because I’m in Australia … that’s wild, knowing that I live just a walk from here.’

The brazen execution comes as tensions escalate between the Hamzy family and the Alameddine clan.

In November, it was believed a gang war could erupt in Sydney after a cocaine shipment worth $100million went missing, leading to a kidnapping.

Tensions were already growing in the southwest after Mejid Hamzy, the 44-year-old brother of jailed crime boss Basam, was shot dead outside his Condell Park home on October 19.

An underworld source said despite the attention given to his younger brother Bassam, Mejid was better connected in the criminal world. 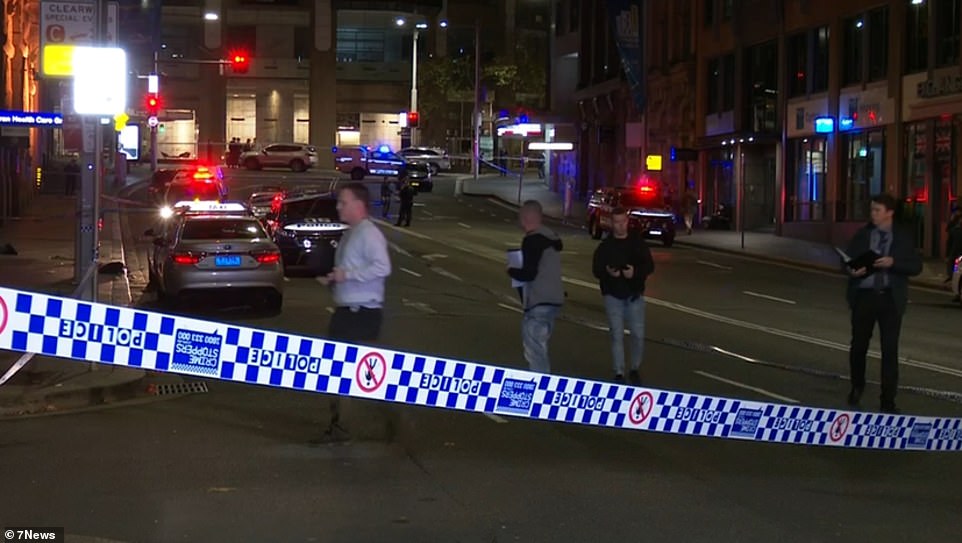 Emergency services were called to Bridge Street, near Circular Quay, at about 10.25pm on Thursday after reports Bilal Hamze had been shot 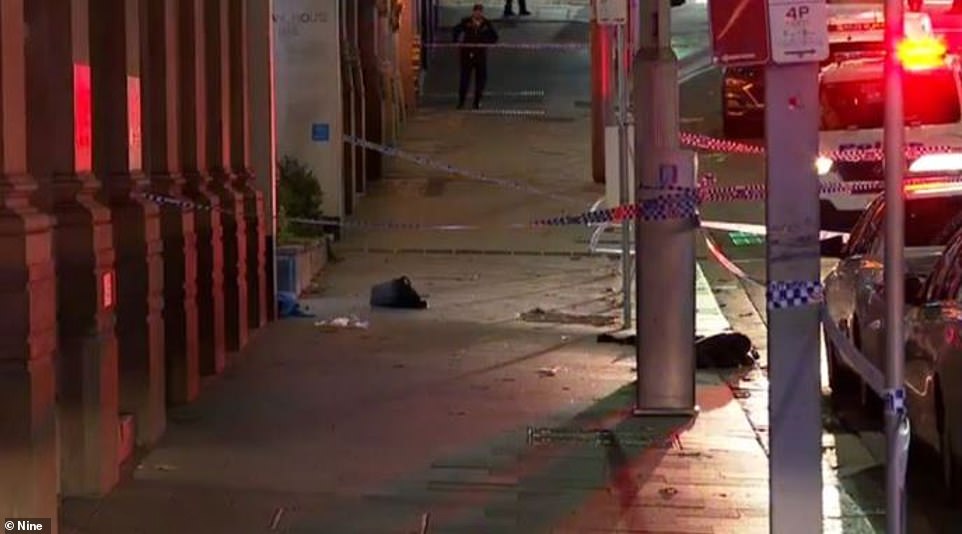 10.30pm: Ambulance arrives at the scene

‘Whoever pulled this stunt is a madman for sure,’ the source said. ‘He is one of the biggest names in Sydney.

‘Mejid is the one who made that family who they are today. Bassam is big but Mejid is a different breed.

‘This guy was well connected and loved by heaps of heavies. His crew won’t take this lightly.’

Mejid Hamzy’s execution had police fearing retaliation attacks and led to a flood of police presence in the area.

Brayden’s brother Joshua was ruled to have knifed Adam in self defence during a 2016 street brawl in Panania, southwest Sydney. 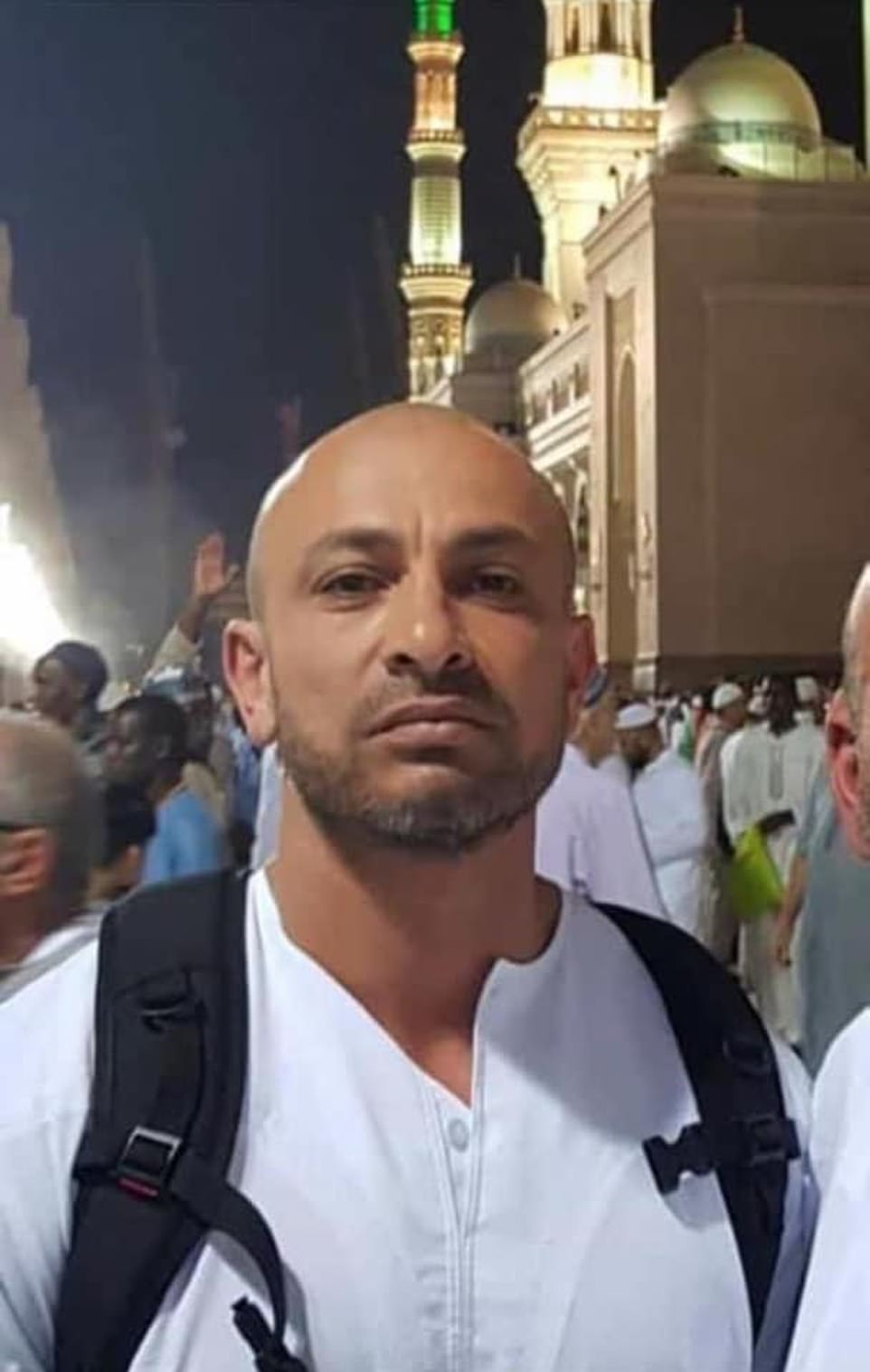 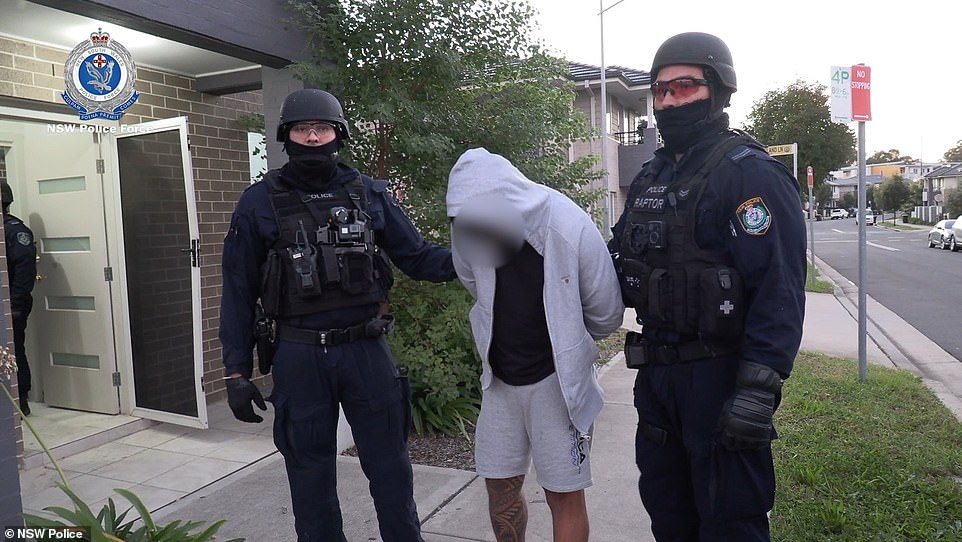 In April, Strike Force Raptor officers conducted 47 raids. All of the 11 arrests made were believed to be connected to the warring Hamzy and Alameddine crime families