Coronavirus survivors are being urged to donate blood as part of a major NHS trial assessing whether it could help some of the sickest patients.

NHS statistics show around 43 per cent of male donors had blood rich enough in antibodies to be included in the research.

The rate was just 29 per cent among women, who studies have shown often escape being struck down with a severe bout of Covid-19.

Simon Callon, 51, of St Helens, Merseyside, survived Covid-19 but lost his father Noel to the disease. He said: ‘To me, donating plasma was a no-brainer’ 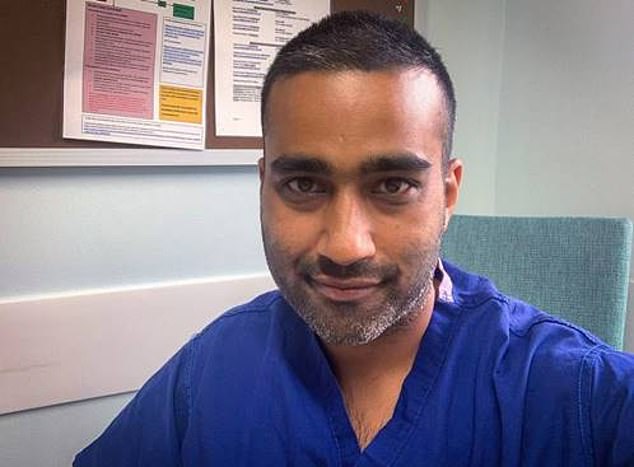 Health chiefs are now calling for more men to come forward and donate their blood ‘to save lives’ from the coronavirus.

Department of Health data shows nearly 43,000 Brits have died after testing positive for the disease since the crisis began.

But other government statistics suggest the true Covid-19 death toll could be in the region of 50,000, when all suspected fatalities are taken into account.

No cure for the SARS-CoV-2 coronavirus has yet been found, and tens of thousands of patients worldwide are involved in trials of promising drugs.

Convalescent plasma therapy is one Covid-19 treatment being tested in Britain, with 3,500 hospitalised patients expected to receive donor blood.

The treatment — first used in the 1918 Spanish flu pandemic and also given to treat SARS — works using the liquid part of the blood, known as convalescent plasma. 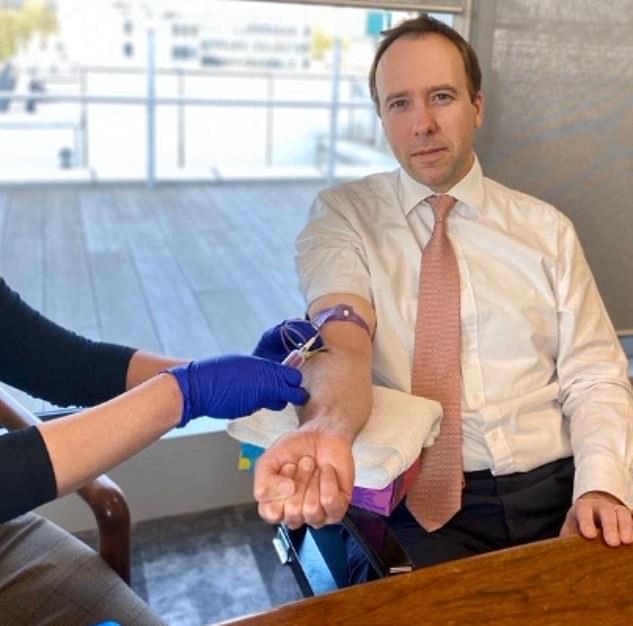 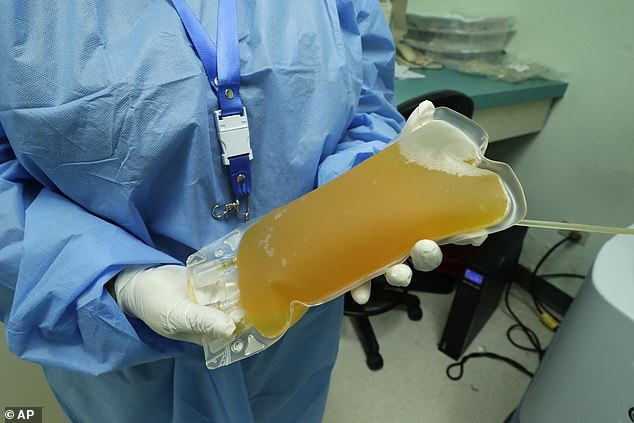 The treatment works using the liquid part of the blood, known as convalescent plasma (pictured, at the Amulfo Arias Madrid Hospital in Panama City)

WHAT IS CONVALESCENT PLASMA AND WHERE HAS IT BEEN USED?

Convalescent plasma has been used to treat infections for at least a century, dating back to the 1918 Spanish flu pandemic.

Convalescent plasma was used as a last resort to improve the survival rate of patients with SARS whose condition continued to deteriorate.

It has been proven ‘effective and life-saving’ against other infections, such as rabies and diphtheria, said Dr Mike Ryan, of the World Health Organization.

‘It is a very important area to pursue,’ Dr Ryan said.

Although promising, convalescent plasma has not been shown to be effective in every disease studied, the FDA say.

Is it already being used for COVID-19 patients?

Before it can be routinely given to patients with COVID-19, it is important to determine whether it is safe and effective through clinical trials.

The FDA said it was ‘facilitating access’ for the treatment to be used on patients with serious or immediately life-threatening COVID-19 infections’.

It came after New York Governor Andrew Cuomo said that plasma would be tested there to treat the sickest of the state’s coronavirus patients.

COVID-19 patients in Beijing, Wuhan and Shanghai are being treated with this method, authorities report.

Lu Hongzhou, professor and co-director of the Shanghai Public Health Clinical Centre, said in February the hospital had set up a special clinic to administer plasma therapy and was selecting patients who were willing to donate.

‘We are positive that this method can be very effective in our patients,’ he said.

Meanwhile, the head of a Wuhan hospital said plasma infusions from recovered patients had shown some encouraging preliminary results.

The MHRA has approved the use of the therapy in the UK, but it has not been revealed which hospitals have already tried it.

Blood banks take plasma donations much like they take donations of whole blood; regular plasma is used in hospitals and emergency rooms every day.

If someone’s donating only plasma, their blood is drawn through a tube, the plasma is separated and the rest infused back into the donor’s body.

Then that plasma is tested and purified to be sure it doesn’t harbor any blood-borne viruses and is safe to use.

For COVID-19 research, people who have recovered from the coronavirus would be donating.

Scientists would measure how many antibodies are in a unit of donated plasma – tests just now being developed that aren’t available to the general public – as they figure out what’s a good dose, and how often a survivor could donate.

There is also the possibility that asymptomatic patients – those who never showed symptoms or became unwell – would be able to donate. But these ‘silent carriers’ would need to be found via testing first.

This antibody-rich plasma is injected into Covid-19 patients struggling to make their own antibodies, with hopes it can help clear the virus.

Antibodies are substances produced by the immune system which store memories of how to fight off a specific virus, such as SARS-CoV-2.

It is currently unclear how long Covid-19 antibodies last for, providing some form of protection, in people who have had the virus.

But if the trials are successful, being given convalescent plasma could become a widespread practice in hospitals.

Health Secretary Matt Hancock donated his blood after recovering from coronavirus in March.

The health service ‘wants to hear from anybody who tested positive for the disease’ or suffered the tell-tale symptoms, including a cough or fever.

But Professor David Roberts, associate director of NHSBT, said: ‘We would especially want to hear from men.

‘We test every plasma donation and men have higher antibody levels, which means we’re more likely to be able to use their plasma to save lives.’

He added: ‘Our studies and many others around the world show men with Covid-19 are more likely to become seriously ill than women.’

And Professor Roberts claimed ‘this makes them better plasma donors once they have recovered’.

The NHS data comes from an analysis of the 592 donations made between April 21 and May 14 — of which 75 per cent were from men.

Donating takes around 45 minutes and medics filter the blood through a machine to remove the plasma, in a process known as plasmapheresis.

She added that the results of the small study were statistically significant, meaning they are ‘pretty confident’ men are more likely to be able to be donors.

A key advantage to the blood therapy is that it’s available immediately and relies only drawing blood from a former patient.

It is also significantly cheaper than developing a new drug, which costs millions to take through trials and regulation before mass production.

Last week it was announced that anyone who tests positive for Covid-19 through the national testing programme will be asked to join a blood plasma trial.

NHSBT said people confirmed with the virus through the ‘pillar two’ national testing programme will receive a text prompt 21 days after their result.

The texts will now be sent on a weekly basis to anyone who tests positive through the national testing programme.

It can take several weeks for the immune system to make enough antibodies to be spotted in the blood.

It comes after a scientific review last week claimed injecting Covid-19 patients with the blood of survivors speeds up their recovery and reduces their symptoms.

Researchers found convalescent plasma therapy cleared the disease in less than a week in adults under the age of 60.

But the antibody-rich plasma took between 10 to 30 days to fend off the disease in elderly patients, who are prone to severe illness from Covid-19.

Scientists in Sweden and Finland, behind the study, said global research indicated the unproven therapy ‘is safe and effective’.

But none of the studies included in the review compared patients receiving plasma to a control group — considered the gold standard of scientific research.

CHILDREN TO BE TESTED FOR COVID-19 ANTIBODIES

Scientists are to examine the level of antibodies for Covid-19 in children.

Researchers said at present it is ‘unclear’ what proportion of British children have been exposed to the novel coronavirus.

Antibody testing determines whether a person has had Covid-19 in the past.

Experts from Queens University in Belfast are leading the UK-wide trial, which will assess the proportion of children who have antibodies.

After their initial assessment the children taking part will be tested again in two months’ time and then half a year later.

Over 1,000 healthy children are being enrolled to the study.

It comes as scientists announced today they will examine the level of antibodies for Covid-19 in children.

Researchers said at present it is ‘unclear’ what proportion of British children have been exposed to the novel coronavirus.

Antibody testing determines whether a person has had Covid-19 in the past.

Experts from Queens University in Belfast are leading the UK-wide trial, which will assess the proportion of children who have antibodies.

After their initial assessment the children taking part will be tested again in two months’ time and then half a year later.

Over 1,000 healthy children are being enrolled to the study.

Researcher Dr Tom Waterfield said: ‘It is unclear what proportion of UK children have been exposed to Covid-19 and how many, if any, have the necessary antibodies to prevent future re-infection.

‘This important research may help with planning for the reopening of schools and other vital children’s services.’

Two plasma donors have described their decision to donate as a ‘no-brainer’.

Simon Callon, 51, of St Helens, Merseyside, survived Covid-19 but lost his father Noel to the disease.

He said: ‘I don’t want anybody going through what happened to my dad.

‘He died on a hospital ward with no family or friends, with a nurse holding his hand. Only 10 people were allowed at his funeral.

‘He’d had a fall at home but the paramedics found his oxygen levels were low and he had a high temperature so they took him in.

‘He had been with my mum for more than 60 years. He was ex-RAF and a long distance lorry driver but also an amateur painter who taught classes. His students formed a socially-distanced guard of honour with their paintbrushes.

‘To me, donating plasma was a no-brainer. If you can save somebody or help somebody, you would do it.

‘The donation was easy, no pain. The staff were brilliant. I hope I can help someone.’

The 40-year-old, from Bicester, said: ‘I have seen the effects of the virus first-hand and how it has taken the lives of many people, both old and young.

‘When the opportunity came to donate plasma and hopefully antibodies to help others in the fight against Covid-19, it was a no-brainer for me.

‘I have seen how the virus has disproportionately affected the BAME group, within the healthcare professionals and in the community.

‘If plasma turns out to be one of the treatments shown to be of benefit to individuals then I would have played my part.’

Anyone who has had coronavirus or the symptoms and is able to travel to a donor centre can offer to donate by calling 0300 123 2323 or visiting www.nhsbt.nhs.uk.