Men with early prostate cancer live longer than those WITHOUT the disease, new data reveals

Men who are diagnosed with prostate cancer early can expect to live for longer than those without the disease, new figures show.

Those diagnosed at stage one had survival rates that were 0.5 per cent higher than those of the general population.

Women diagnosed with breast cancer and all adults with skin cancer have the same chance of being alive a year later if the disease is caught at the earliest opportunity, the data shows.

Melanoma and prostate cancer have the best one- and five-year survival rates among men, with more than 90 per cent of men surviving either for a year or more, while cancer of the pancreas 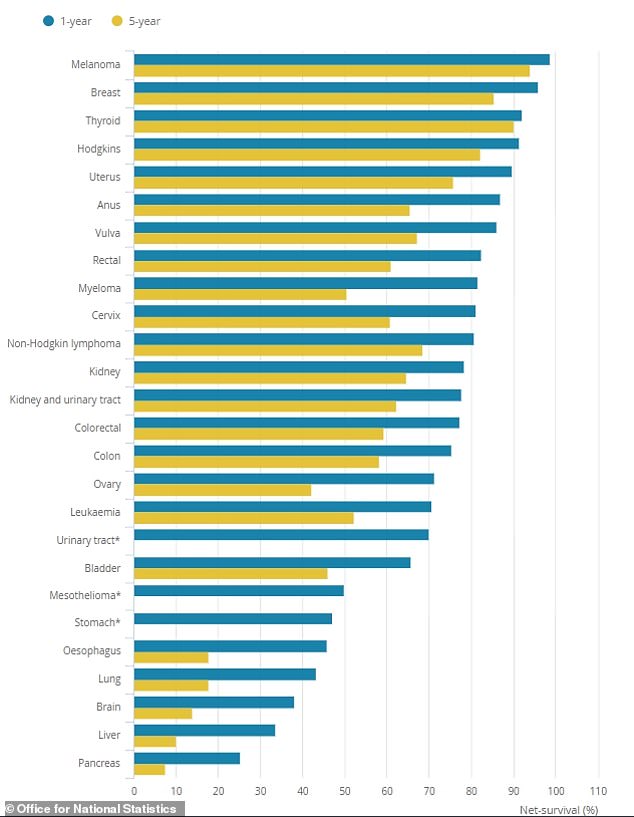 Among women, melanoma skin cancer and breast cancer have the highest survival rates, with the vast majority surviving either for five years or more, while pancreatic, liver and brain tumours are the deadliest

Experts suggest that early diagnoses – which are easiest to treat – can also prompt people to adopt healthier lifestyles.

The Office for National Statistics (ONS) figures are the first detailed estimates to show how the survival rates for a number of cancers vary, depending on the stage it is diagnosed.

Survival rates for the stages one and two a year later were more than 100 per cent, meaning that fewer men with prostate cancer died than expected when compared with the general population.

Even 5-year survival estimates were over 100 per cent for stages 1 and 2, with good survival at stage 3 at 96.5 per cent and a larger drop at stage 4 to 47.7 per cent, highlighting the importance of early diagnosis.

Earlier diagnosis for prostate cancer and breakthroughs in treatment for advanced disease have seen overall survival across all stages of the disease rise from 80.2 per cent in 2006 to 87.1 per cent.

Karen Stalbow, of Prostate Cancer UK, said: ‘The fact that the survival chances for men diagnosed with localised prostate cancer appear to be even higher than men without a diagnosis is certainly positive, and may also indicate that a diagnosis can lead to increased personal health monitoring and healthier behaviours post diagnosis.

‘Nearly 40 per cent of cases of the disease are still only caught at a late stage when the chances of living for five or ten-years are greatly reduced.

‘Overall, we need to find better diagnostic tools to catch more prostate cancers early, and determine which cancers are aggressive and which are not.’

But survival rates for other types of cancer England are slow to improve and in some cases getting worse, statistics revealed.

Deaths rates rose for bladder, colon and late stage breast cancers between 2015 and 2016.

The NHS’s target of diagnosing and treating 85 per cent of cancer patients within 62 days of their GP referral has not been met for the 35th month in a row.

The target was only met for 79 per cent of patients in England in November, meaning one in five had to wait more than two months after being told they may have cancer.

The 62-day target has now been breached for 35 months in a row.

Since it was first breached in January 2014, more than 125,000 people have waited more than two months to begin potentially life-saving therapy.

More than three in five NHS hospital trusts in England (62 per cent) missed the target in November 2018.

Dr Fran Woodard, an executive director at Macmillan Cancer Support said: ‘Behind these figures are people waiting anxiously for a diagnosis and treatment.

‘If the NHS is to deliver on its ambitious aim of earlier diagnosis and person-centred care for everyone living with cancer, we need a fully costed plan for the workforce to build on the measures in NHS England’s long-term plan.’

Patricia Marquis, director of the Royal College of Nursing in England added: ‘Today’s figures show the NHS in England is headed for its worst year in a decade for the number of patients waiting more than two weeks between seeing a GP and their first consultant appointment after an urgent cancer referral.

‘The data reveals a 60 per cent increase in patients waiting too long in 2018/19, compared to the same months of the previous year.

‘The overall number of patients being referred has increased by 15 per cent year on year, but the sharp increase in breaches of the two-week target is very worrying.

‘Tens of thousands of patients and their families are enduring agonising waits, all too aware that a small delay could have a serious impact.’

Not enough is being done to protect people from common cancers, campaigners warn, saying the diseases are only seeing slow improvements.

The most deadly cancers are those of the pancreas, liver, brain and lungs, with nine out of 10 women dying within five years of being diagnosed with a pancreatic tumour.

And for men a tumour on the pancreas proves fatal within five years in 93.6 per cent of cases.

Macmillan Cancer Support, one of the UK’s biggest cancer charities, raised concerns about improvements in the figures for common cancers being slow.

The one-year survival rate for bladder cancer also dropped – from 75 per cent to 74.8 per cent.

‘It’s concerning to see that five-year survival rates for some of the most common cancers show little evidence of improvement in recent years,’ said Dr Fran Woodward, Macmillan’s executive director of policy and impact.

‘We were encouraged to see the emphasis on improvements in cancer care in the recent Long-Term Plan for the NHS in England.

‘And today’s news shows the scale of the challenge and the urgent need for a fully funded workforce strategy to meet the ambition of getting cancer outcomes here to be the best in the world.’

Cancer survival rates in the UK are among the worst in Europe – something which has been blamed partly on delays to diagnosis.

But survival rates for women diagnosed with late-stage breast cancer have dropped, provoking reaction from the charity Breast Cancer Now.

‘But the sharp decline in survival outcomes when breast cancer is diagnosed later is extremely worrying and shows just how much more there is to do on metastatic breast cancer.

‘If we are to finally stop more women dying from breast cancer, we urgently need to find ways to stop the disease spreading, and to treat it effectively when it does.