Men with strong grips ‘less likely to have issues in bed’

It is good news for men like Donald Trump whose handshake is less a greeting than a vice-like grip.

Having a strong handshake makes you less likely to suffer from erectile dysfunction, according to a study.

Researchers have found every 5kg (11lb) increase in handgrip strength makes a man 18 per cent less likely to have trouble performing in the bedroom.

Mr Trump is famed for his strongman handshake, which lasted a full 19 seconds with Japanese Prime Minister Shinzo Abe. His white-knuckle encounter with Emmanuel Macron led the French president to almost lose his balance, with body language experts noting it is an ‘assertion of power and control’.

Now medical experts say a vigorous handshake is the sign of muscle strength in both the hands and ‘lower extremities’. It is the loss of muscle strength which can cause erectile dysfunction, as well as declining testosterone, which also makes for a weaker handshake.

The study was carried out by Chonnam National University in South Korea, whose authors wrote: ‘The principal finding of the present study was that men with lower handgrip strength had a higher risk of moderate to severe erectile dysfunction.

Handshakes have long been seen as a sign of dominance, allowing businessmen and politicians to gain the upper hand.

Political analysts have been fascinated by Mr Trump’s particular greeting, where he grabs the hand of another person, yanks it abruptly towards him and pumps it up and down vigorously. President Macron, whose handshake with the US President saw Mr Trump let go first, said it was a ‘moment of truth’ which proved he was not a pushover.

But handgrip is also an important warning sign of someone’s overall strength, health and physical activity. A feeble handshake can be a sign of diabetes, which also raises someone’s risk of erectile dysfunction.

The Korean study of more 1,771 men over the age of 50 took the strength of their grip and whether they had mild, mild to moderate, severe or non-existent erectile dysfunction. 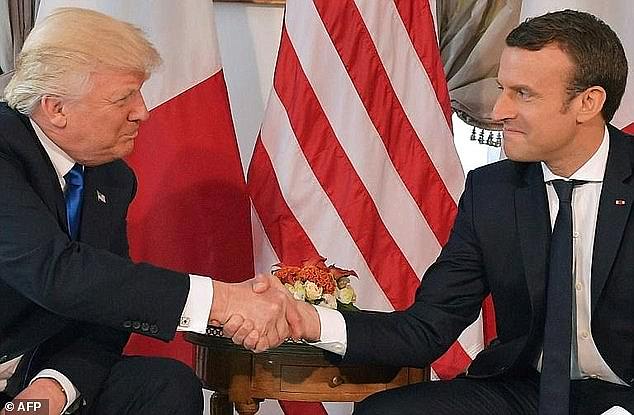 Donald Trump’s white-knuckle encounter with Emmanuel Macron led the French president to almost lose his balance, with body language experts calling it an ‘assertion of power’

Their handshake was measured using a mechanical dynamometer, which measures how much mass someone can compress in 5kg (11lb) increments. For every 5kg increase in strength, men’s chances of erectile dysfunction fell by 18 per cent.

Muscle strength, which declines naturally with age, can lead to bedroom problems for men – which their handshake may betray.

The good news is that physical activity can help with general strength and health, with moderate to vigorous exercise cutting men’s chances of erectile dysfunction by 25 per cent.