Menopausal women should be protected from workplace discrimination say MPs

Menopausal women should be protected from workplace discrimination just as pregnant woman are, say MPs

Employers should protect women going through the menopause just like those who are pregnant, according to MPs.

A ‘menopause policy’ should be standard in the workplace, they say, as women battle anxiety, depression, hot flushes and muddled thinking.

A record number of women over 50 are in work, with 4.9 million employed, which is double the number of female over-50s working 25 years ago.

Celebrities including Sky newsreader Kay Burley, 58, and BBC presenter Louise Minchin, 50, have spoken out on how the menopause has affected their work.

Women across the country have lost jobs, been forced to take time off or raid their savings and go part-time because of the symptoms.

Labour MP Carolyn Harris is reported in the Guardian as saying: ‘You wouldn’t dream of having a workplace where people weren’t entitled to certain things because they were pregnant, and it’s exactly the same for women with the menopause.

Conservative MP Rachel Maclean, one of the first to speak about the menopause in the House of Commons, said: ‘I absolutely agree that employers need to do more.

‘It’s not well understood. Employees don’t get the support they need, it is very difficult for women at work often.’

Research has found many women are afraid to admit they are suffering problems from the menopause for fear of losing their jobs.

The symptoms come when women stop ovulating and their hormone levels drop, with many ending up on anti-depressants. 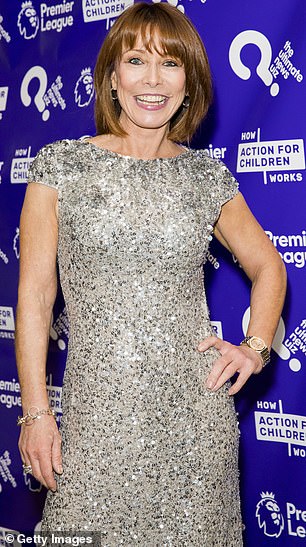 Sky newsreader Kay Burley, 58, has spoken out on how the menopause has affected her work

A survey by online platform Health & Her earlier this month found a quarter of working women over 50 find their menopause symptoms so debilitating they would like to cut their hours at work.

Miss Harris told the Guardian she had gone to see a GP in 2010 following treatment for a gynaecological condition, adding: ‘I was having a nervous breakdown. I was really depressed and had mental health issues.

‘I think that’s down to the fact I was going through the menopause.

‘So many women end up on antidepressants or being told to pull themselves together.’

Sue Hackett, the London regional equality officer at the GMB union, said: ‘It is high time we stop treating menstruation and menopause as taboo subjects.

‘Women have put up with insulting comments and a woeful lack of provision for far too long for what is a completely natural condition.’