Menopause medicines work no better for vaginal pain than a placebo

Estrogen tablets and gels like the brand pictured are no more effective in treating menopausal pain than placebos, according to a new study

Gels and tablets for menopausal pain are no more effective than placebos, a new study suggests.

More than half of women between 45 and 70 experience menopause symptoms including vaginal dryness and pain during sex, but less than half of affected women use treatments.

According to a new study by Massachusetts General Hospital in Boston, women needn’t bother with the available therapies because they are no more effective than placebos.

The findings highlight a need for a better understanding of menopausal pain and its causes to create treatments that actually work for the majority of middle-aged women with symptoms.

While the most common symptoms associated with menopause such as hot flashes occur beforehand, many women experience uncomfortable symptoms for years afterward, the period known as post-menopause.

Post-menopause refers to the state after menopause, which occurs typically between ages 45 to 55 when estrogen levels fall, causing periods to stop and the inability to have children naturally.

Up to 75 percent of postmenopausal women experience vaginal dryness and 40 percent experience pain during sex.

Research from the North American Menopause Society shows that postmenopausal symptoms negatively affect quality of life as much as other chronic conditions such as arthritis, chronic obstructive pulmonary disease, and irritable bowel syndrome, but more than half of the affected women are not using any medication to treat their symptoms.

A 2017 study from Italy found that vaginal therapies have low continuation rates for several reasons including cost, messiness, safety concerns and a lack of symptom relief.

The study by researchers at Massachusetts General Hospital focused on the effects of two products a prescribed vaginal estrodiol hormone tablet and an over-the-counter vaginal moisturizer in 302 postmenopausal women with moderate to severe symptoms over 12 weeks.

The first product was a vaginal estrodiol hormone tablet, an estrogen therapy that aims to reverse symptoms that have been linked to decreasing estrogen levels.

The second was a nonhormonal vaginal moisturizing gel called Replens.

The main outcome was a decrease in the reported severity of the symptoms across the board, in both the placebo products and the medicated ones. 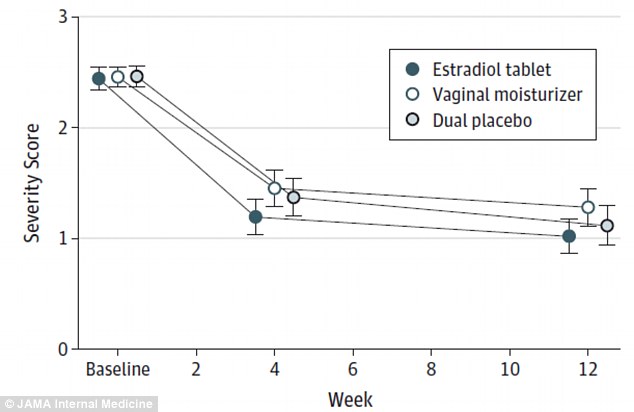 The study by Massachusetts General Hospital found tablets and gels for postmenopausal symptoms were no more effective than placebos, as shown in the graph above

‘The findings suggest that neither low-dose vaginal estradiol nor Replens vaginal moisturizer offers meaningful benefit for control of women’s symptoms relative to placebo,’ Dr Alison Huang and Dr Deborah Grady, two researchers from the University of California San Francisco, wrote in a commentary.

They said it was not surprising that the Replens had the same results as the placebo gel because both had a similar viscosity and the placebo had many of the same ingredients found in commercial lubricants that relieve dryness and pain during intercourse.

Replens is claimed to be more effective than other lubricants because of an ingredient called polycarbophil that supposedly helps it attach to the walls of the vagina for more long-lasting moisturization, but the findings from this study do not support this claim.

With the tablet, the study found that vaginal estrogen has no added benefit for reducing symptoms in women who are simultaneously using a gel.

‘Our results suggest that most women can achieve greater than 50 percent reduction in symptom severity with regular, consistent use of a vaginal gel with lubricant properties and do not see added symptom improvement with vaginal estradiol,’ the study conclusion says.

Overall, though, the findings emphasize a need for more research into the underlying causes of postmenopausal symptoms to create more effective treatment options.