Mental health awareness campaigns should be stopped, a leading psychiatrist has urged.

Sir Simon Wessely, former president of the Royal College of Psychiatrists, has warned they ‘massively’ expand ‘demand’ on already stretched NHS services and may be convincing people they are ill when they are not.

In recent months, the Duke and Duchess of Cambridge and Prince Harry have backed mental health campaigns and urged people to be more open about their troubles.

Sir Simon has previously praised Prince Harry for speaking out about his mental health issues following the death of his mother Princess Diana.

However, in this new interview with the BMJ, Sir Simon did not refer directly to the young royals or any specific campaigners.

He said: ‘Every time we have a mental health awareness week my spirits sink.

‘We don’t need people to be more aware. We can’t deal with the ones who already are aware.’

Sir Simon Wessely, former president of the Royal College of Psychiatrists, warned that the cash-strapped NHS is already unable to cope with patients 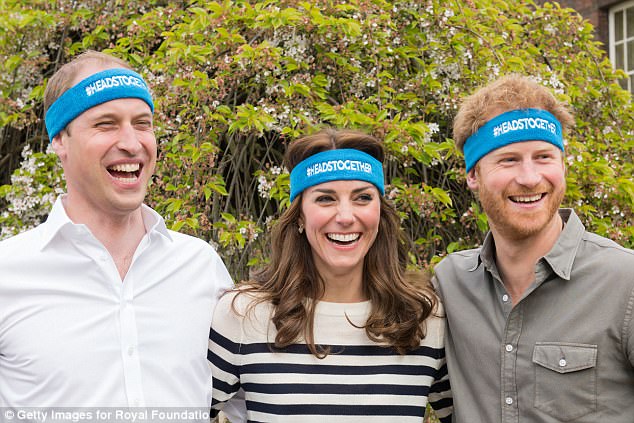 Last year William, Kate and Harry formed the Heads Together coalition, bringing together some of the country’s leading mental health charities and campaigners

Last year William, Kate and Harry formed the Heads Together coalition, bringing together some of the country’s leading mental health charities and campaigners.

Weeks later William chatted to Lady Gaga, who has spoken about her mental health battles, and stressed the importance of ‘talking about emotions’.

And just a few days ago Kate made an appearance in a charity video about children’s mental health.

But in Sir Simon’s opinion, awareness campaigns encourage people to seek treatment and care from over-stretched staff who are struggling to cope with rising demand and slashed funding.

‘We don’t need people to be more aware’

Sir Simon added: ‘I’m really worried that we will overstretch and demoralise our mental health services if all we do is raise awareness.’

He added the NHS must provide better support for mental health patients – of which there are 1.7 million adults in the UK, figures show.

A change in attitudes

There has been a concentrated effort in recent years to change attitudes towards mental health.

The Government, NHS and charities have pushed to change public perception of mental health and for it to be treated in the same way as physical health.

As a result of the increased media coverage, royal and celebrities have all opened up about their own mental health demons.

However despite having welcomed Prince Harry’s interview about his mental health in April this year, Sir Simon, who was until June president of the Royal College of Psychiatrists, Wessely believes there is too much awareness.

He particularly questions surveys in which most students report having mental health problems.

Sir Simon added: ‘We should stop the awareness now. In fact, if anything we might be getting too aware.

‘One wonders what’s happening when you have 78% of students telling their union they have mental health problems—you have to think, “Well, this seems unlikely”.’

But experts hit back at Sir Simon’s comments. Paul Farmer, chief executive of Mind, issued a statement to MailOnline on behalf of Time to Change and Rethink Mental Illness. It read: ‘We are now starting to see the scale of unmet need.

‘As more people come forward and seek help, NHS mental health services and other sources of support must be properly resourced so that true levels of demand can be met.

‘The awareness raising that got the issue of mental health into the public consciousness is also what provided the mandate for this extra funding and political attention.

‘We now need that money to reach the frontline, so that everyone with a mental health problem gets the help they need when they need it.’

He lauded celebrities, such as Will and Harry, who speak out openly about their own experiences as ‘it inspires others to do the same’. For too long people have struggled in silence, Mr Farmer said.

Mental health care has been identified as a major priority by Theresa May, who called shortfalls in services a ‘burning injustice’.

Health Secretary Jeremy Hunt recently said mental health needed to be made a priority amid concerns it had been overlooked due to stigma.

Earlier this year, BBC Panorama revealed mental health trusts in England have had their funding cut by £150 million over the past four years.

In May, the Government announced it would create 21,000 mental health posts in the NHS by 2021 as part of a £1.3 billion drive. It was aimed to help treat an extra one million people.

But critics immediately questioned the pledge and doubted that enough people could be trained in such a short space of time. Others said it would do little to replace the 6,000 mental health nursing posts lost since 2010.

Sir Simon said such staff will have to be ‘cheap and not that well trained’. He warned they would struggle to manage the ‘difficult stuff’.

In the final few months of being president of the RCP, he helped turn around the stigma within the medical profession. This same stigma has also played a part in many students not wanting to seek a career in psychiatry.

He told The BMJ that he knew wanted to go into psychiatry early on in his career – despite colleagues stating he was ‘too good’ to enter such a field.

Many believed those wanting to treat mental health patients ‘must be mad themselves. Sir Simon added: ‘I vividly remember neurologists would always say, “You seem a decent enough chap. I can’t understand why you want to do psychiatry”.

‘My senior house officer was quite upset a few weeks ago when she turned up at the emergency department and someone said, “Oh look, here’s the pest controller”. It’s terrible. That happens a lot.’

He said psychiatrists form a boundary between sadness and depression and don’t try to treat people who don’t need it – a view he said some may deem ‘unsympathetic’.