Mentally ill children in England are being forced to travel hundreds of miles for NHS treatment, statistics show.

An investigation has revealed more than 1,200 under 18s were admitted to inpatient units outside of their local area in 2017/18 because of a lack of beds.

One child even had to travel 339 miles (545km) for care – seven miles (11km) short of the distance between Brighton and Newcastle.

This comes after NHS England pledged in 2017 to end out-of-area mental health placements. It also announced it was creating up to 180 new beds for children.

Psychiatrists have warned being sent away from home can slow a patient’s recovery, with many already being ‘distressed’ and at risk of suicide or self harm.

Dr Jon Goldin, vice-chairman of the child and adolescent faculty at the Royal College of Psychiatrists, said: ‘Young people should not have to travel long distances – in some cases hundreds of miles – to receive the care they need for their severe mental illnesses.

‘[These can include] eating, mood or psychotic disorders.

‘Care and support from family members is a crucial part of recovery, which is made significantly harder if patients are sent far from home for treatment.

‘Loneliness and social isolation are also likely to hinder their chances of recovery, so such placements are often counterproductive.’

One in every nine children aged between five and 15 has a mental health problem, NHS Digital statistics show.

The issue is also rife in the US, where up to 7.1 per cent (4.4million) of two-to-17 year olds have been diagnosed with depression or anxiety.

To uncover how many children receive the help they need, the Press Association sent out a Freedom of Information request to NHS England.

WHAT DOES THE NHS LONG TERM PLAN SET OUT FOR MENTAL HEALTH AMONG CHILDREN AND YOUNG PEOPLE?

As part of NHS England’s Long Term Plan, the Government has pledged to invest at least an extra £2.3bn ($2.8bn) a year on mental health care.

It will particularly increase funding for children and adolescents.

Evaluations showed 83 per cent of children who were referred to crisis and liaison services were seen within four hours.

Over the next five years, the NHS will also fund mental-health support teams in schools and colleges.

These will be rolled out to a quarter of the country by 2023.

Results revealed the furthest distance one child was forced to travel in the first six months of 2018/19 was 333.8 miles.

The year before, the furthest recorded distance was 285 miles (458km).

Over the 12 months of 2017/18, 1,249 children were admitted to beds beyond their local area. This was defined as ‘placement outside the geographical footprint covered by the specialised commissioning hub.’ There are 10 hubs across the country.

In total 587 young people were admitted to child and adolescent specialised mental health inpatient units away from home in the first six months of 2018/19 – the most recent figures available. It suggests the NHS is not on track to significantly reduce the number of children being sent away by the end of the year.

The issue is worst in the Midlands, South East and London, where ‘several’ children had to travel more than 250 miles (402km) for treatment.

A further 2,101 children and young people in England were treated within 100 miles of their homes.

Tom Madders, director of communications at the charity Young Minds, said: ‘For children, being far from home is often distressing.

‘And going to a hospital hundreds of miles away can make a frightening situation worse for the whole family.

‘Families also face extra costs for travel and accommodation, which they may not be able to afford, just to be there for their child.

‘In some cases the specialist nature of treatment may mean there is not a suitable inpatient unit in the immediate area, but too many children are still having to travel very long distances.

‘The Government needs to continue to take action on this. It’s also vital that early intervention is a priority, so that young people can get help in their communities before their problems escalate.’ 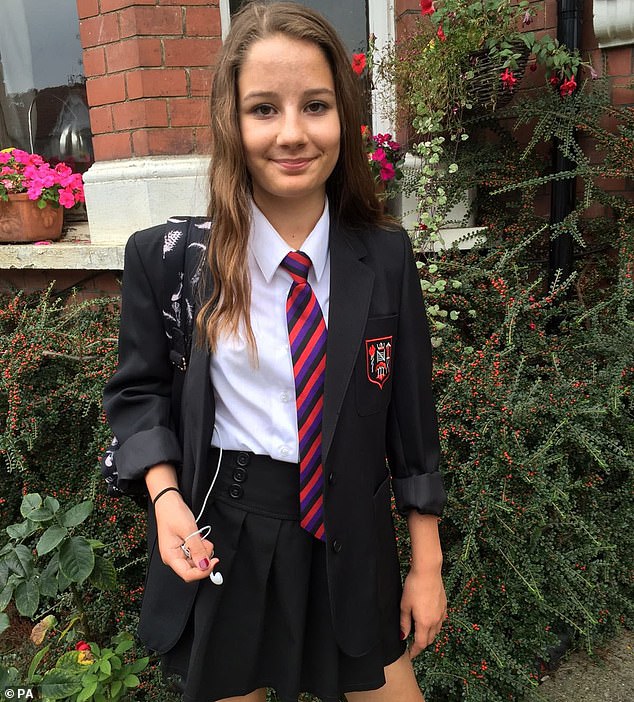 Molly Russell (pictured) took her own life at 14 years old in November 2017. Her father claimed she had been influenced by self-harm and suicide content on social media

The children’s commissioner for England Anne Longfield previously blamed the ‘epidemic’ of mental-health problems among young people on the pressures of social media and increasingly demanding school environments.

Earlier this year, the father of Molly Russell, who took her own life at 14 in November 2017, claimed she was influenced by self-harm and suicide content on social media.

As part of the NHS Long Term Plan, the Government has pledged to invest at least an extra £2.3bn ($2.8bn) a year on mental health care.

‘We welcome NHS England’s commitment to end the use of out-of-area placements for children and young people,’ Mr Madders said.

‘We want to work with them to ensure this is achieved as soon as possible and to improve the availability of data as they have for adults sent out-of-area for treatment.’

NHS England and the Department of Health have been approached for comment.

If you or someone you know has contemplated or is concerned about suicide, you can speak to professionals for confidential support:

If you are worried about your child’s mental health, call the charity YoungMinds’ free parents’ helpline on 0808 802 5544.

Signs of depression in children can include:

Some also have physical symptoms, like headache or abdominal pain.

Depression in children can occur due to family issues, bullying, other mental-health problems, or physical, emotional or sexual abuse.

It can be triggered by one event, such as a bereavement, or a build-up of things.

If you suspect your child is depressed, try to talk to them about how they are feeling.

Let them know you are concerned and you are there if they need you.

If they will not talk to you, encourage them to reach out to another relative, teacher or family friend.

If this does not help, contact your GP, who may refer your child to a specialist mental-health service.