Detectives in California are investigating what led to a fatal officer involved shooting involving a ‘mentally ill man’ described as a homeless former football star, that was caught on video Monday.

Tulare Police responded to a call of a bus driver who said he had been assaulted, when they arrived they were confronted by 27-year-old Jontell Reedom, who matched the driver’s description, at around 4:30pm.

In the graphic video, an officer is seen chasing Reedom who then attacks the officer, punching him several times in the street.

Reedom, who played for the Tulare Union football, appeared un-phased as the officer tried to subdue him with a taser.

Jontell Reedom, 27, was shot and killed during an altercation with police on Monday Officer’s were responding to a report that a bus driver was assaulted, the video begins with the officer and Reedom engaging with each other 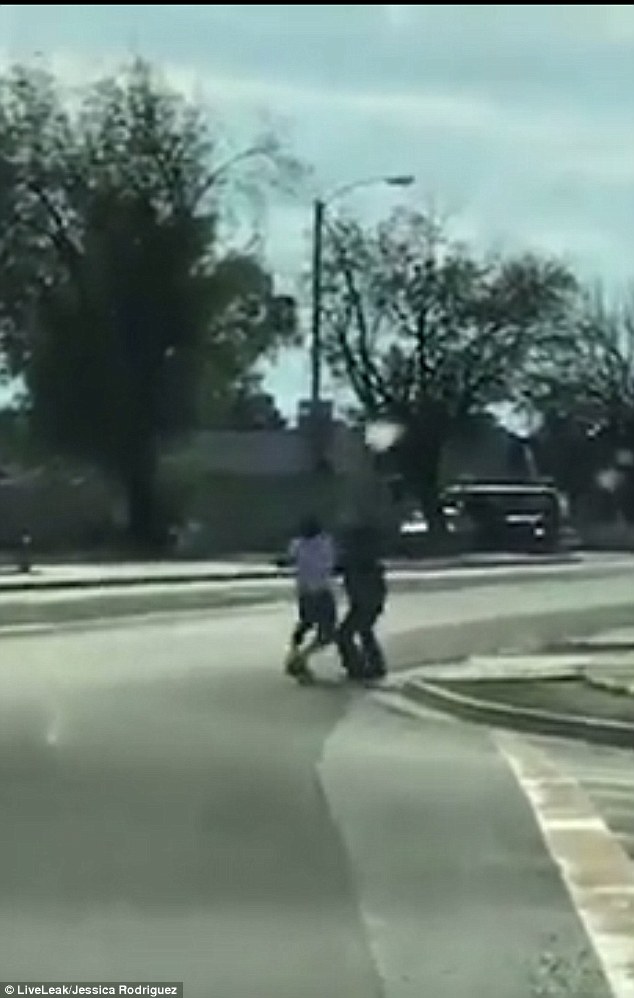 The altercation quickly escalates, with Reedon seen punching the officer several times despite just being tasered 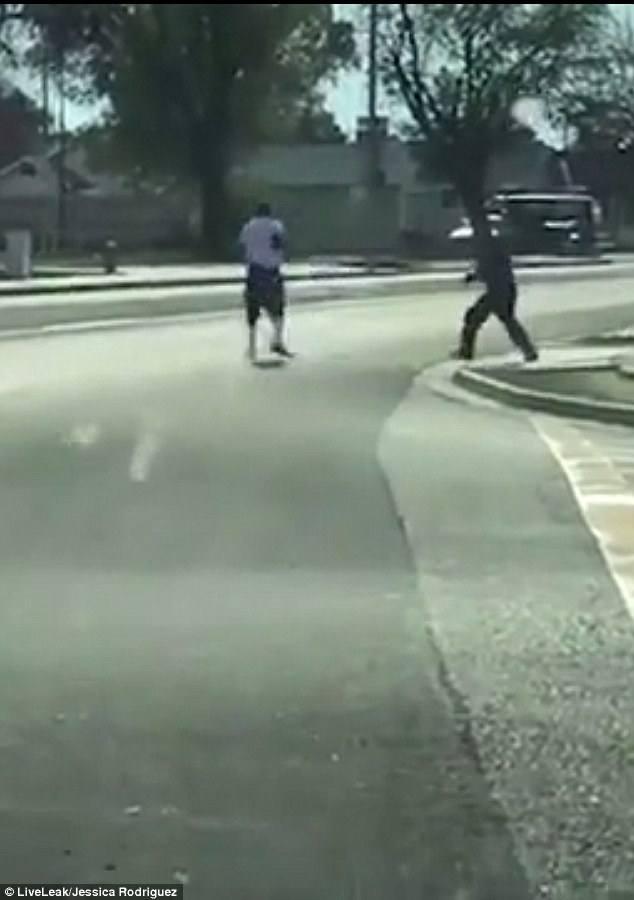 Soon, Reedom is able to wrestle the officer’s billy club away from him.

A second officer approaches as the suspect continues to fight with the first officer.

Several gunshots ring out before Reedom falls to the ground in what one witness described as a pool of blood.

Witnesses say the man attacked a police officer, while others say the police used ‘excessive force’ to combat a mentally ill man.

The subject is known to police in the area according to Visalia Times Delta.

‘There was a struggle at one point in time where the office advised over the air they had deployed their Taser, but they were ineffective,’ said Sgt. Jon Hamlin. ‘There was a short foot pursuit after that and another time where the suspect became combative.’

An eyewitness who says he was driving by a nearby said he saw an officer draw his taser, and then the man rushed the cop and knocked him to the ground.

‘I saw another officer pull up and pull his taser out,’ he said. ‘I looked down and that’s when I heard about four to five shots.’

Students at nearby Cherry Avenue Middle School were outside at track practices when the shots rang out and that were heard inside the school.

Students were rushed inside Tulare City School District, located next to the campus. The district office was put on lock-down. 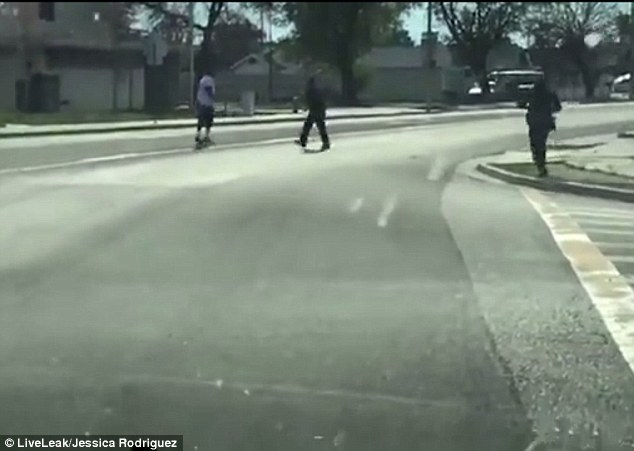 Another officer approaches and again, it appears he too tries to use a taser unsuccessfully 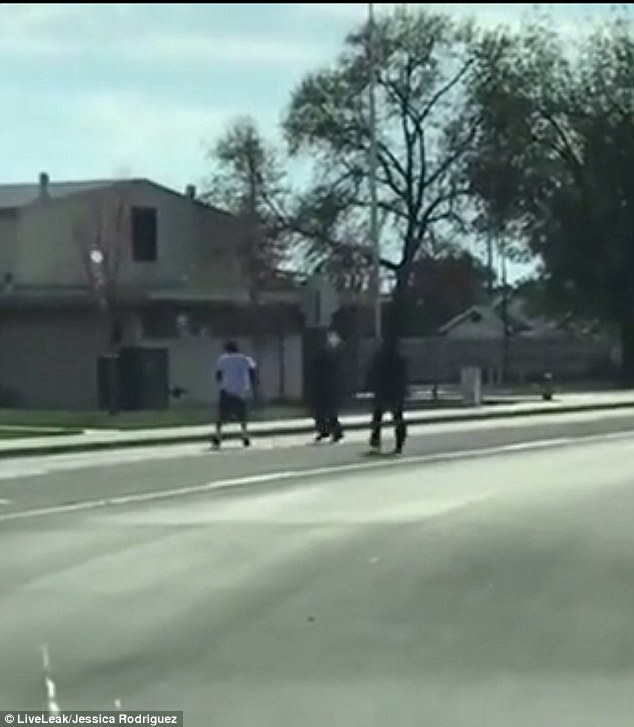 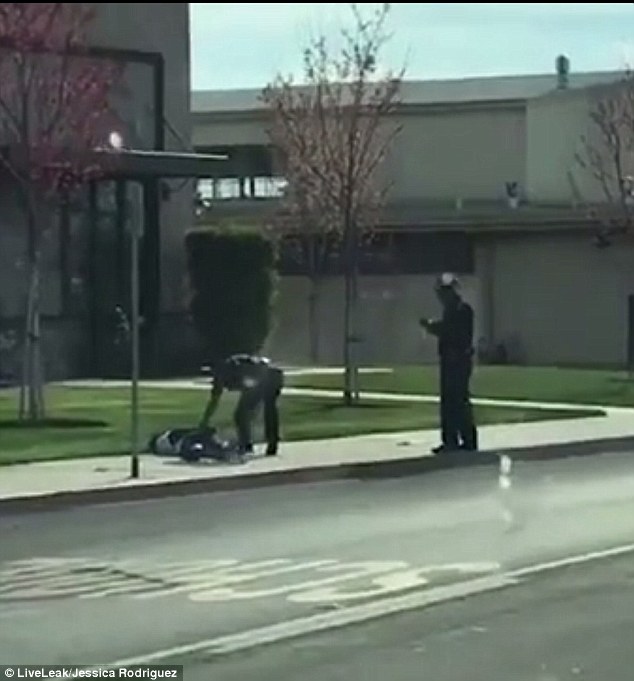 ‘All I saw was a young black man fighting with the police,’ David Meadows, another witness said. ‘He had no weapon.’

Meadows said the man was mentally ill, and that when the officers tried tasering him, he just kept fighting and even grabbed an officer’s baton.

‘Guy fought police for a cool minute,’ Meadows said. ‘He was whopping on them.’

‘They shot him several times,’ Meadows said. ‘They already know he’s mentally ill. Why would they do that?’

Reedom was rushed to a nearby hospital, it is unclear when he was pronounced dead.

Both officers were also injured during the struggle, according to Hamlin.

They will be placed on paid administrative leave until a formal internal investigation is completed.

The Tulare County Sheriff’s Department’s crime lab collected evidence at the scene, and because it was an officer involved shooting an outside agency will take over the investigation.

A GoFundMe account has been set up to help pay for Reedom’s burial.