Meow-ve off my deck! Bucky the cat makes the strangest noises after he spots a stray in his garden

Meow-ve off my deck! Bucky the cat makes the strangest noises after he spots a stray in his garden

A ginger cat is heard making the strangest noises after spotting a stray in his garden.

Footage shows Bucky, from Dublin, Ireland, making bizarre noises through the window at a white and ginger cat who stepped into his garden.

The video shows the territorial cat having a stand off with the stray stares at Bucky through the window. 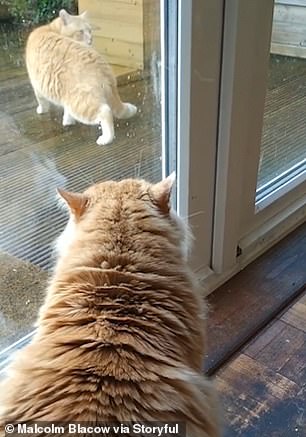 Bucky makes strange noises (left) as the stray appears intrigued as it stands in the garden in Dublin, Ireland. The stray momentarily turns around towards the fence (right)

The stray turns its head and front paw away from Bucky who continues to make the unusual sounds.

Bucky repeats the noises as the stray cat tiptoes across the decking while the house cat becomes more agitated.

His owner Ger Holland, 29, a photographer, posted the footage on Twitter where it received more than 13,000 likes. 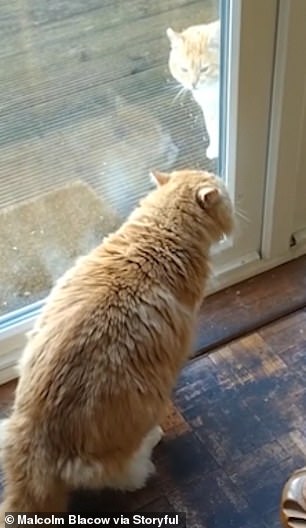 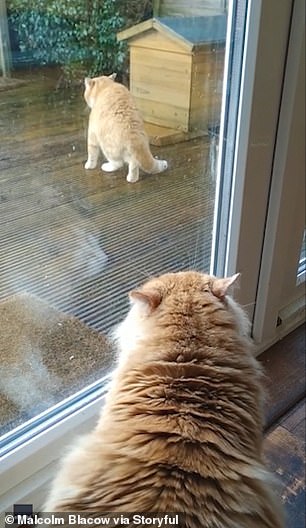 Bucky continues to make the bizarre sounds to mark his territory (left). The stray cat gets the message and leaves the garden (right)

Ms Holland captioned the video: ‘Our cat is normally VERY quiet but obviously when an enemy approaches, needs must.Still laughing!!! Thanks to my friend for recording while I was out!

Alongside a picture of a sleepy Bucky she later captioned: ‘I can’t quite believe the attention this has got tonight.

‘I’m so thrilled to see the joy it’s bringing to Twitter though – I think it’s needed right now.

‘Our cat is called Bucky, he was a stray who we adopted & he’s the floofiest boy I know. Here he is in his happy place!

People were quick to comment on the hilarious footage with one asking if he was speaking in Irish.

Prakash Thaker said: ‘Seems to have trained in some choir’

‘The look on the other cat’s face’, Susan Smyth added.

Another added: ‘I have had many cats – four presently. I have never heard one talk like this. Is it Irish?’