Mercedes cars can now park THEMSELVES at Stuttgart Airport

Mercedes owners in Germany can now drive to an airport, jump out of the car with their suitcases and the vehicle will take itself to a park space.

The fully-automated parking software has been co-developed with tech company Bosch and is now available at Stuttgart Airport – granted you have one of the latest expensive Mercs equipped with the necessary self-driving feature.

It is the world’s first automated driverless parking function to be officially approved for commercial use, having received the green light from Germany’s Federal Motor Transport Authority.

Enjoy your trip! Mercedes and Bosch have co-launched a driverless parking function at a German airport. Once the owner walks away, the car will take itself to a pre-booked space within the multi-storey car park

The function is only available to those who own the latest generation S-Class, which costs in excess of £85,000, or the £105,000-plus electric EQS saloon produced from July 2022 onwards.

Owners can drive to a parking garage, remove their luggage from the vehicle, and then send the car to a pre-booked spot using the Automated Valet Parking feature in the Mercedes smartphone app.

Once the driver has left the parking garage, the vehicle drives itself to its assigned space and parks.

On the owner’s return, an alert from the smartphone app will awaken the Mercedes and it will return to the pick-up point to greet the driver. 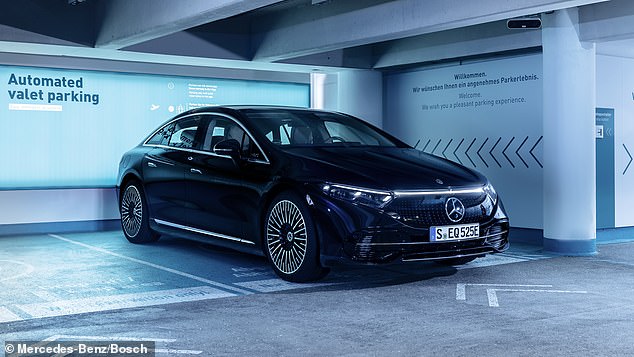 Owners drive to a parking garage, remove their luggage and then send the car to a pre-booked spot using the Automated Valet Parking feature in the Mercedes smartphone app 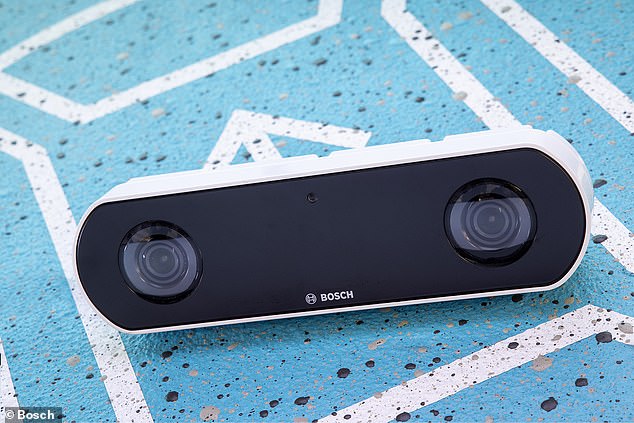 The software relies on communication with these Bosch sensors installed in the car park. It helps the car to detect obstacles in its path 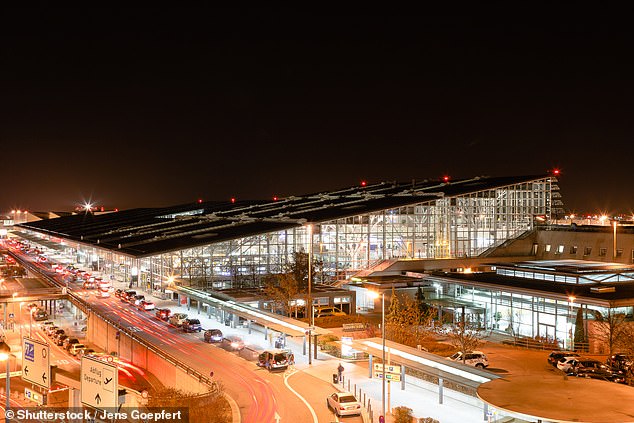 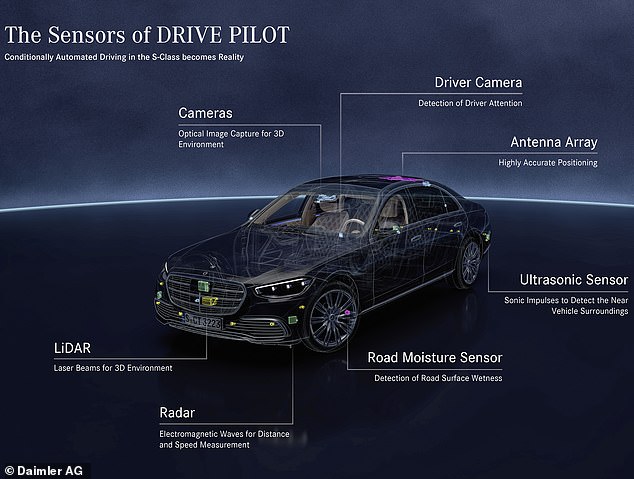 Drive Pilot is available in the new £85k S-Class (pictured) and £105k EQS electric saloon. Both are high-end luxury saloons kitted out with a multitude of sensors and radars to direct the tech

The software relies on communication with sensors in the parking location to detect obstacles in its path, and has for now only been approved for use in one parking house in Stuttgart Airport which is fitted with the technology, the company said.

It means the cars can drive themselves up and down ramps to move between stories in the parking garage.

If the infrastructure sensors detect an obstacle, the vehicle brakes and safely comes to a complete stop. Only once the route is clear does it continue on its way.

The two companies received approval in 2019 to begin using the Automated Valet Parking system at the Mercedes-Benz Museum parking garage, and have been cooperating on the development of fully automated driverless parking since 2015. 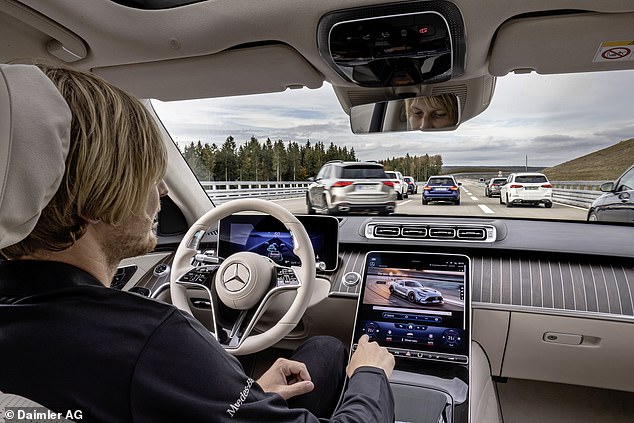 Mercedes is one of the brands at the forefront of self-driving advancements, with cars already on the market with automated functionality 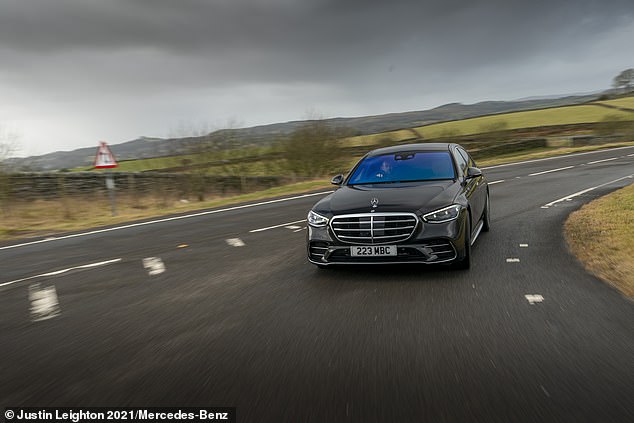 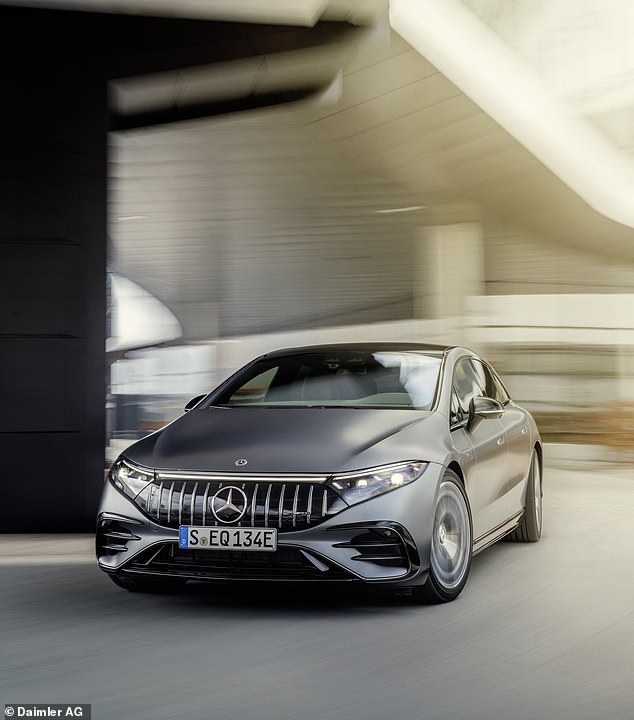 The functionality comes as the UK Government is pushing to pass self-driving legislation to allow some cars, coaches and lorries with features can be used on motorways from next year.

Only features such as lane-keeping technology would be legal, with fully autonomous self-driving cars – where motorists can check emails or watch TV behind the wheel – not legal until 2025.

It means we’re unlikely to see something similar at Gatwick, Heathrow or any other major UK airport until the middle of the decade.

Thatcham Research, a UK automotive security and safety lab, welcomed the arrival of the self-parking feature at Stuttgart Airport but said clarity on liability in the insurance sphere would be needed before such technology is introduced in Britain.

‘Since the car is doing all the unsupervised driving, the Intelligent Park Pilot function effectively delivers full Level 4 Automation for the first time anywhere in the world.’ 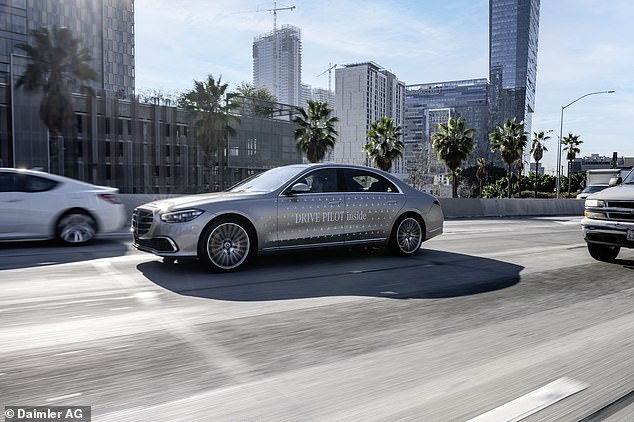 Mercedes was the first manufacturer in the world to meet legal requirements for ‘Level 3’ self-driving systems. Currently, it has only been signed off for use in Germany 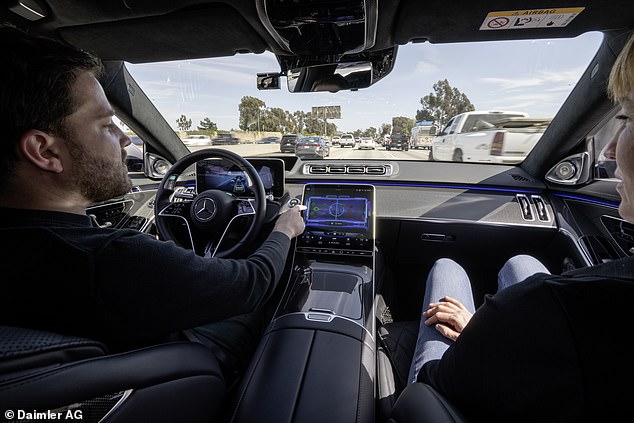 While the DrivePilot system is switched on, a user is allowed to do other things while on the move, such as use the infotainment screen in the car to watch a film or browse the internet 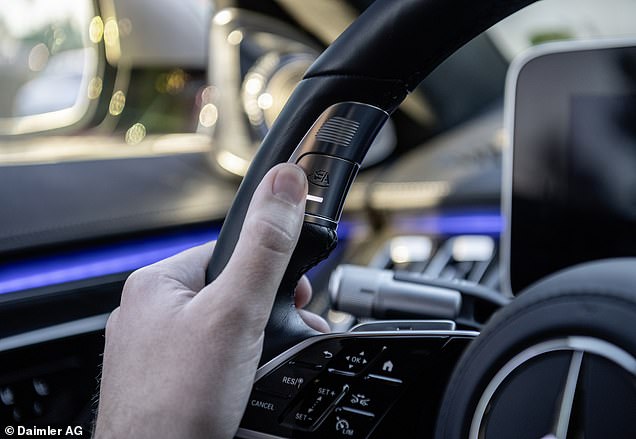 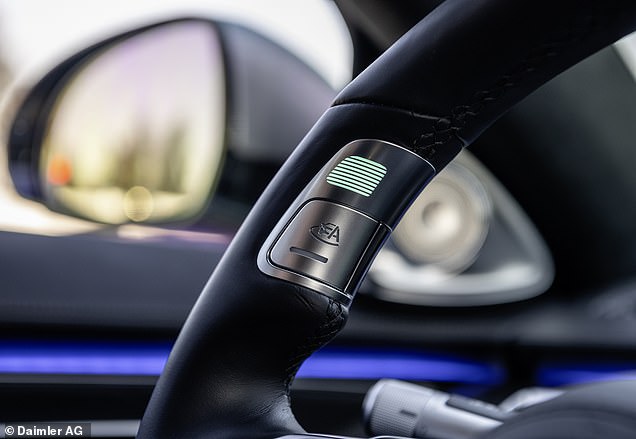 Mercedes’ DrivePilot can be used on motorways in Germany. When the built-in GPS tracking system identifies when the car is being used on one of these motorways, the light on the Drive Pilot button on the steering wheel will flash white (left). Another light above the button will turn turquoise when the system is active (right)

Currently, the highest level of vehicle autonomy is Level 2, such as Tesla’s Autopilot system. The Government is currently looking to pass legislation for Level 3 ‘Conditional Autonomy’ to be legal on motorways from next year

The Law Commission’s proposal published earlier this year outlined plans for the legal framework to consider motorists differently when automated driving features are in operation.

When a self-driving system is active, it recommends that a human in the driver’s seat should legally become a ‘user-in-charge’ – and would avoid prosecution if the vehicle drives itself dangerously or causes a crash.

This would mean immunity from a wide range of offences, such as exceeding speed limits and running red lights when the self-driving feature is in operation.

Instead, the company or body that obtained the authorisation for the technology’s use would become an ‘Authorised Self-Driving Entity’ (ADSE) and be held responsible for the car’s actions in the eyes of the law.

Following a collision, the ASDE would be required to work with a regulatory body, in order to avoid repeat occurrences by providing data to understand who was at fault and where liability lies.

The ADSE could also face sanctions if regulators deem necessary.

A user-in-charge would still be required to retain some duties, such as holding a driving licence, having insurance and ensuring occupants are wearing seatbelts. And they will have to remain within the drink-drive limit.

He added: ‘It’s also an application that many drivers will appreciate. Parking can be stressful and accounts for around a quarter of crashes in the UK.

‘And so, the car taking over this task is something that many will see the benefit to, especially in multi-storey environments.

‘This is good news for the adoption of Automated Driving technology, as it demonstrates a relatively safe and advantageous use case to drivers.

‘However, there needs to be clarity for the UK insurance market since the carmaker will be liable if there’s a collision. So, whilst insurers will initially settle claims, they will want clear subrogation channels with carmakers, and this is yet to be defined in the UK market.’

Ministers in August announced investment of £100million towards speeding up the shift to self-driving vehicles in Britain.

It will go towards projects which could eventually see self-driving vehicles delivering groceries to customers or assisting passengers through airports.

Experts have proposed that drivers are renamed ‘users-in-charge’ who are not criminally liable for crashes when self-driving cars hit the roads.

Instead, the developer of the technology would be held responsible if a collision occurred.

AA president Edmund King said the Government ‘is right to embrace the positive changes offered by this new technology’.

He added that assisted driving systems are ‘already helping millions of drivers stay safe on the roads’.