This is the moment an elderly man faceplanted on the pavement as he desperately tried to get away from a speeding Mercedes driver.

Taxi driver Shaun Windeatt was horrified when he saw the shocking incident unfold on the way to a job in Southampton on Tuesday.

Dashcam footage shows an elderly pedestrian making his way across the road at some traffic lights.

But as the lights turn green a Mercedes-Benz CLK 270 speeds forward before the pensioner has time to get across.

The clip shows the man rushing to get out of the way, losing his footing and falling face-first on the concrete, smashing his glasses, as the ‘selfish, aggressive’ driver continues on his way.

Dashcam footage shows an elderly pedestrian making his way across the road at some traffic lights in Southampton before a silver Mercedes (right) speeds through them as they turn green. The man rushes to get out of the way in time but falls on his fave on the pavement (left)

Pulling over to help the pensioner, Mr Windeatt, 50, found him badly shaken up, ‘dazed’ and his face bloodied from the impact.

Although the driver of the silver Mercedes did turn back to check the injured man, Mr Windeatt claims he failed to apologise and drove off without leaving details.

A spokesman for the Royal Society for the Prevention of Accidents said that driver should anticipate pedestrians crossing the road and slow down if needed – not ‘intimidate’ them. 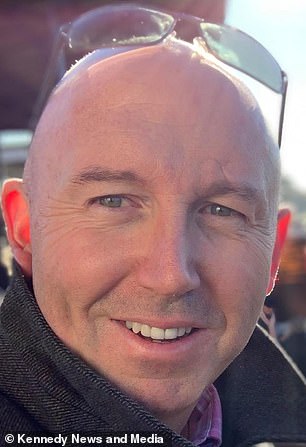 Taxi driver Shaun Windeatt, 50, (pictured) was horrified when he saw the shocking incident unfold on the way to a job in Southampton on Tuesday

Mr Windeatt, from Southampton, Hampshire, said: ‘It’s shocking. [The driver] seemed oblivious to what he had done wrong.

‘The man had accelerated quite fast and this guy’s gone to run [across the road] and tripped over.

‘He bashed his head so he was probably a bit dazed or shaken up. He said he’d had a couple of falls in the past.

‘He had spectacles on and the side of the specs went into the side of his head. The arm was bent and the blood coming from his head was where his glasses had taken the impact.

‘It shocked me when I saw [the elderly man trip over]. He hit the floor at a speed.

‘He’d only started to rush when the guy sped up from the traffic lights.

‘The other driver didn’t say anything, not sorry or apologies.

‘I don’t even know if he would think he’s done anything wrong. That’s the problem with some drivers – you don’t know if they realise they were wrong.’

After Mr Windeatt helped the elderly man into his taxi and cleaned him up, he refused to go to hospital and was instead desperate to get home to his wife.

Returning to check on him later that day, kind-hearted Mr Windeatt found the man cleaned up but still a little confused.

He said: ‘When I picked up his shopping bag, it was very heavy with tins. So he went down quite badly. 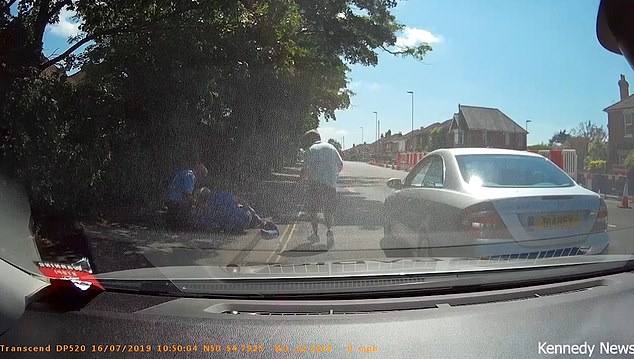 Pulling over to help the pensioner, Mr Windeatt, 50, (far left) found him badly shaken up, ‘dazed’ and his face bloodied from the impact. Pictured centre is the driver of the Mercedes (right)

‘I took the guy home and cleaned him up with wipes. He wouldn’t go to the hospital or doctors because he’s the sole carer for his wife who’s been bedridden for three years.

‘I gave him my number in case he needed more help, but I couldn’t do much more.

‘He doesn’t live very far from where I am, so I stopped by later in the evening.

‘He was cleaned up, with a couple of cuts to the head and various scrapes to his left arm and hand, plus his upper leg was very sore. But he said he felt fine with regards to the head bump.

‘I explained to him that on dash cam it looked like [it was the silver car’s fault], but he didn’t want to make a lot of fuss.’

It was only after the incident when Shaun reviewed his dash cam footage that he realised just how the incident had played out.

Mr Windeatt said: ‘I’ve got to be honest, I saw the fella fall over but because of the car I didn’t realise until I watched it back later. It was definitely the [silver car]. 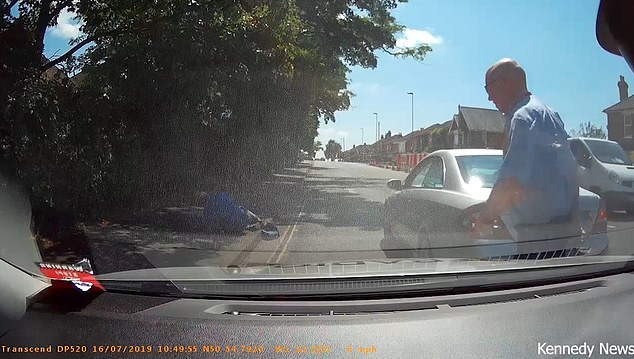 Although the driver of the silver Mercedes did turn back to check the injured man, Mr Windeatt claims he failed to apologise and drove off without leaving details

‘I didn’t realise at the time what had happened. The driver didn’t say very much and wasn’t much help.

‘He definitely didn’t apologise. I don’t think he would have thought he’d done anything wrong.

‘I have passed the Advanced Driving test and am a member of the Institute of Advanced Motorists, and sadly see such poor, aggressive and selfish drivers on the road all the time.

‘He should have been aware of the pedestrian in the road. You’re supposed to give way to pedestrians.

‘He helped him with his bag, but then as I was getting him into the car, he just left. He didn’t leave his details.

‘It just looked like the guy had stumbled initially and we both stopped to help him.’

A spokesman for the Royal Society for the Prevention of Accidents said: ‘Rule 146 of the Highway Code says that drivers should try to anticipate what pedestrians and cyclists might do.

‘It is important to remember that elderly pedestrians might need longer to cross the road and as such drivers must reduce their speed to allow them sufficient time to cross safely, without being intimidated.

‘Forward planning and looking well ahead is a critical component to safe driving.’ 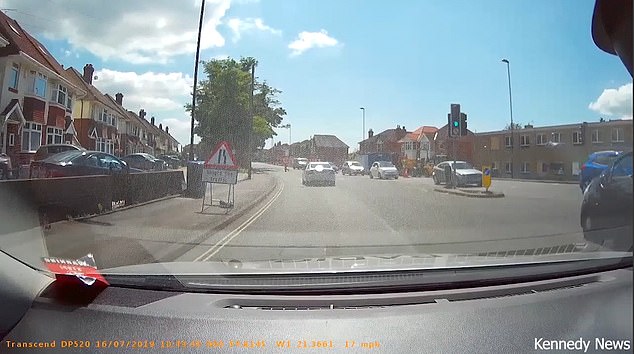