Dave has been awarded the 2019 Hyundai Mercury Prize for Album of the Year.

The Streatham-born rapper, 21, paid tribute to his brother Christopher as he embraced his beloved mum after taking to stage to accept the honour in London’s Eventim Apollo on Thursday.

Clad in a neon tracksuit, Dave praised his sibling – who is currently in prison serving a life sentence – for being the inspiration behind his acclaimed debut album Psychodrama.

Grand prize: Dave has been awarded the 2019 Hyundai Mercury Prize for Album of the Year

After being awarded the prize by Annie Mac, Dave invited his mother onto the stage, and said in his acceptance speech: ‘I don’t know what to say. I want to thank everyone that made this happen.

‘I wanna thank all of the exceptional musicians that came and performed tonight. I did not expect this. You guys, I respect you all so highly. Simz, Thai, Nao, I love you guys.

‘I’m so, so, so happy to be in you guys’ company, all the exceptional musicians out here today. I wanna thank God, my mum, my family, my friends. Everyone that’s here.’ 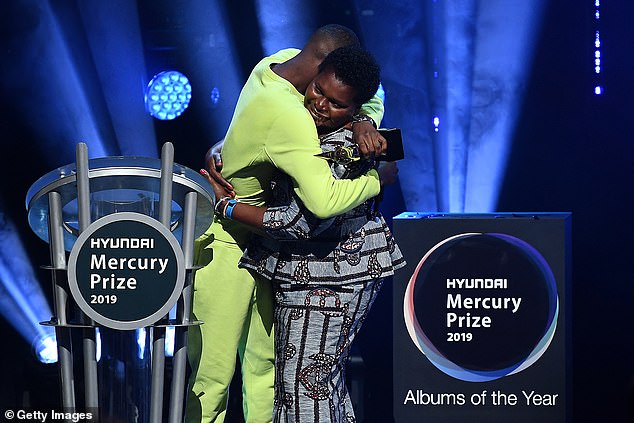 Joyful: The South London-born rapper took to the stage in London’s Eventim Apollo on Thursday to accept the honour and joyfully brought his mum on-stage 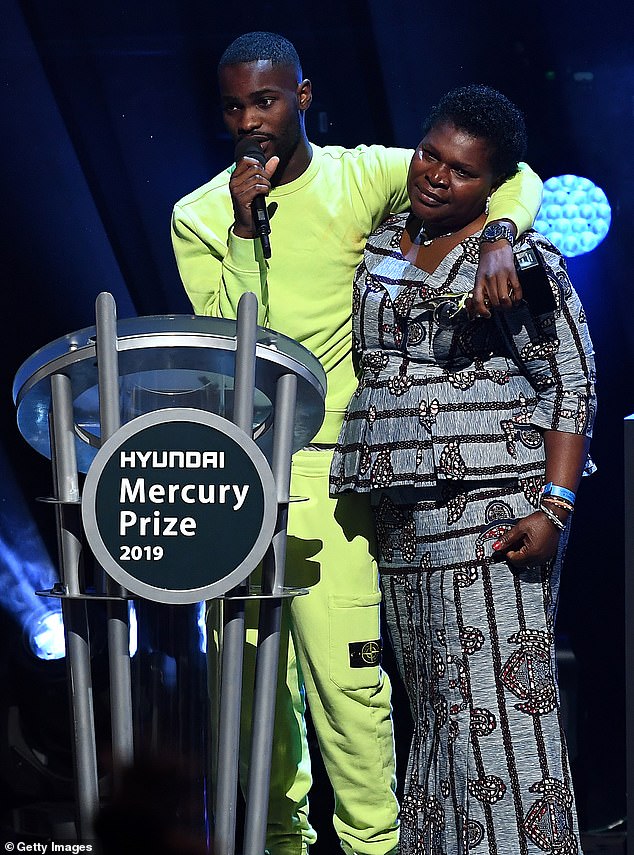 Touching: During his acceptance speech Dave paid tribute to his older brother Christopher, who is currently serving a life sentence in prison

Casual: Sporting a neon green tracksuit Dave later took to the stage to deliver a stellar performance after receiving the award 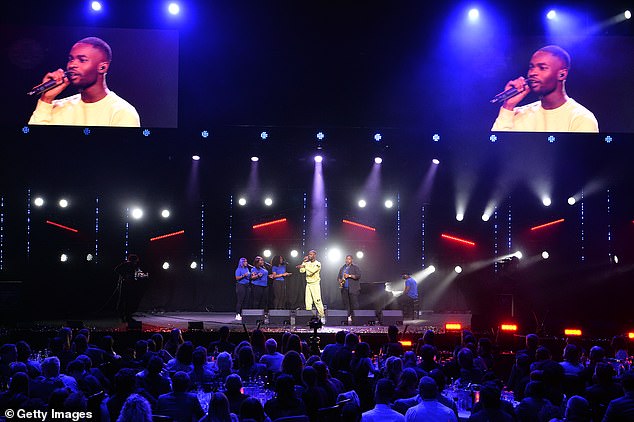 Elated: Dave proudly thanked his mum – who raised him and his two siblings as a single parent for most of their childhood

Foals – Everything Not Saved Will Be Lost – Part 1

IDLES – Joy as an Act of Resistance

slowthai – Nothing Great About Britain

The 1975 – A Brief Inquiry into Online Relationships

Dave then paid tribute his older brother Christopher, who is serving life in prison for his involvement in the killing of Sofyen Belamouadden in 2010.

The Streatham singer said that his brother was the inspiration for his debut album, which begins with the rapper talking to a therapist and maintains the theme throughout each song.

As a whole the album also touches on topics including Dave’s strained relationships, poor upbringing, his father’s absence, and issues such as domestic abuse and racial inequality.

‘Most importantly, I know I tell this story all the time, but I wanna thank my brother Christopher that inspired this album.

‘This is your story that we told, and even though you can’t be here with us today, I know you’re watching this bro. And I’m so grateful, thank you guys so much.’ 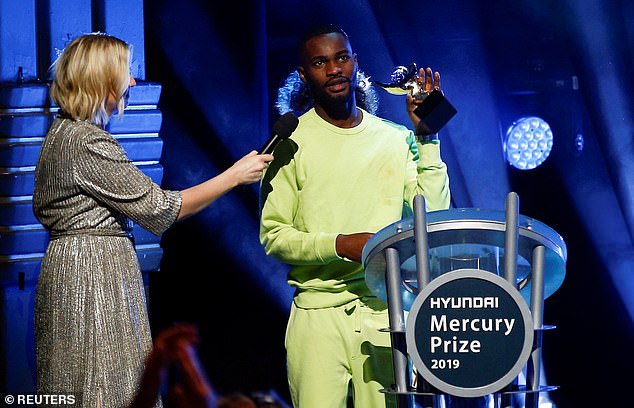 Proud: Speaking about his brother Dave said: ‘Most importantly, I know I tell this story all the time, but I wanna thank my brother Christopher that inspired this album’ 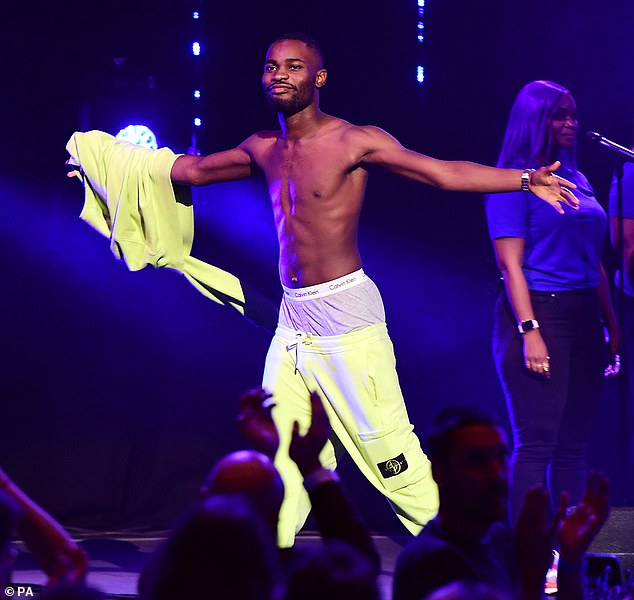 Sensational: He added: ‘This is your story that we told, and even though you can’t be here with us today, I know you’re watching this bro. And I’m so grateful, thank you guys so much’ 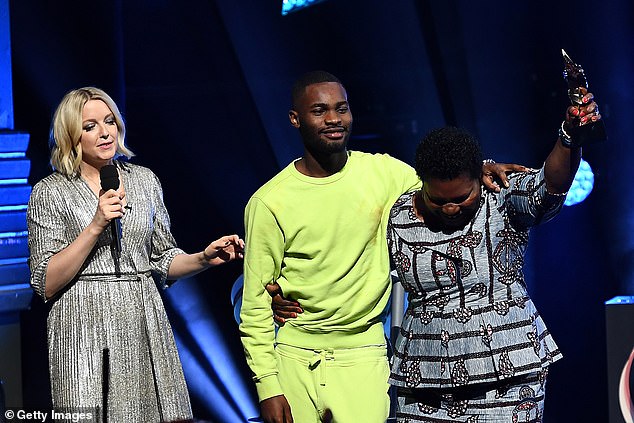 You are the winner! Dave’s proud mother couldn’t contain her pride as she proudly held her son’s award after taking to the stage with him 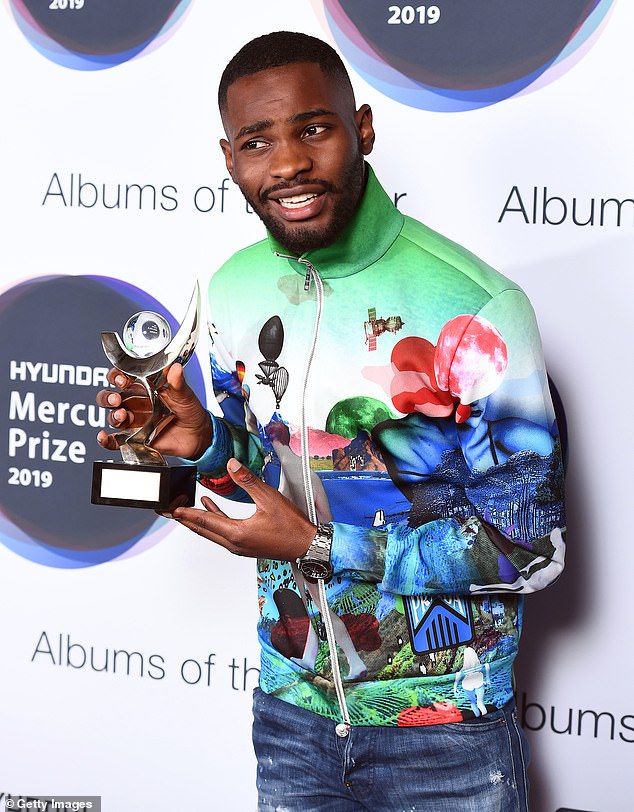 Happy: Following the awards show Dave posted backstage with the top award. This is the 27th year it has been awarded in its history 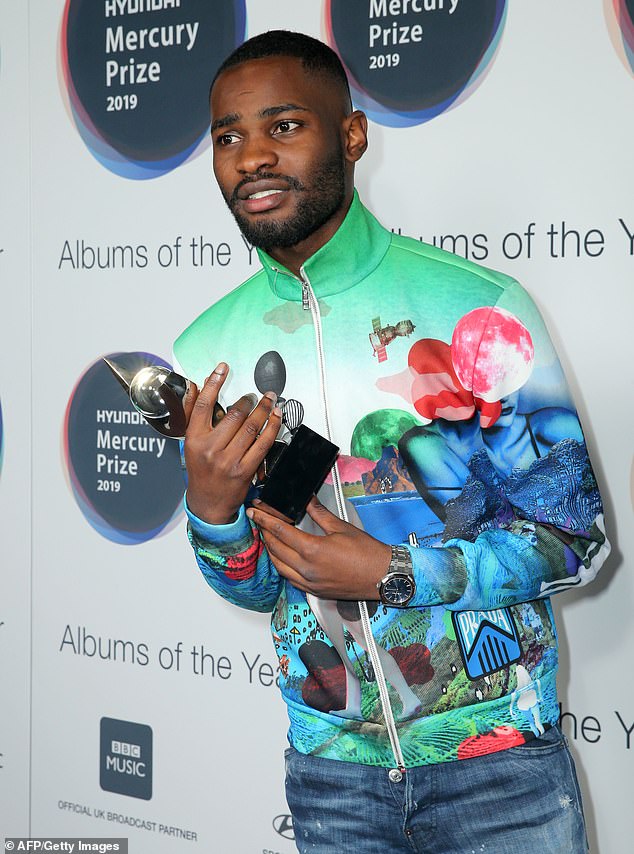 Iconic: Dave has won critical acclaim for his hard-hitting album Psychodrama, which

Dave beat off stiff competition from the 11 other nominees for the top prize, including The 1975 – who were absent from the ceremony due to scheduling conflicts with their tour in Australia.

Dave was awarded the prize by a panel of judges who decided the winner on the night, including grime superstar Stormzy, Gaz Coombes of Supergrass, singers Jamie Cullum and Jorja Smith and broadcasters Annie Mac and Clara Amfo. 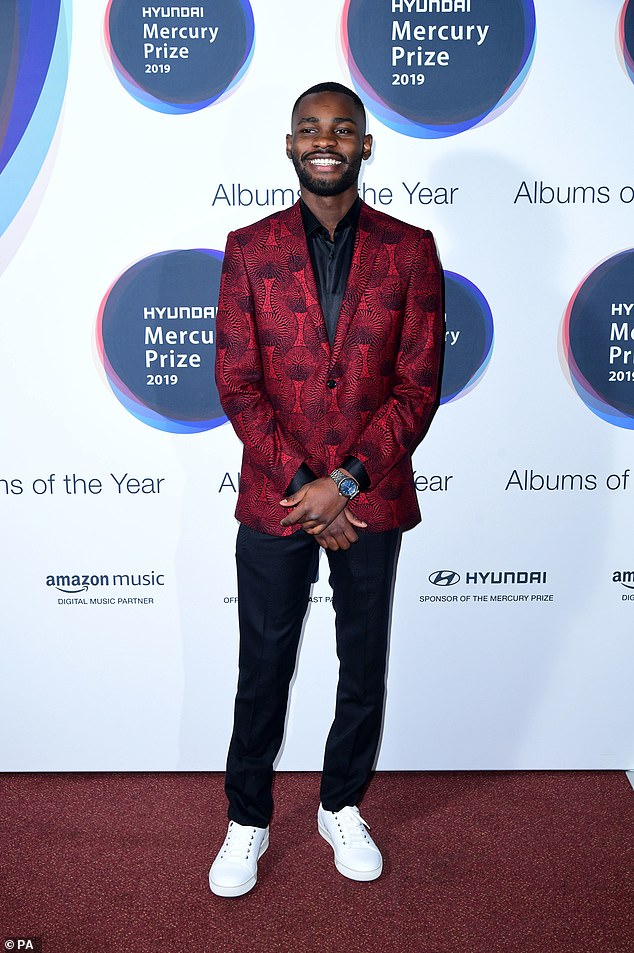 Suave: Earlier in the evening, Dave cut a dapper figure in a red and black printed blazer as he accepted for his award for being on the Albums Of The Year shortlist 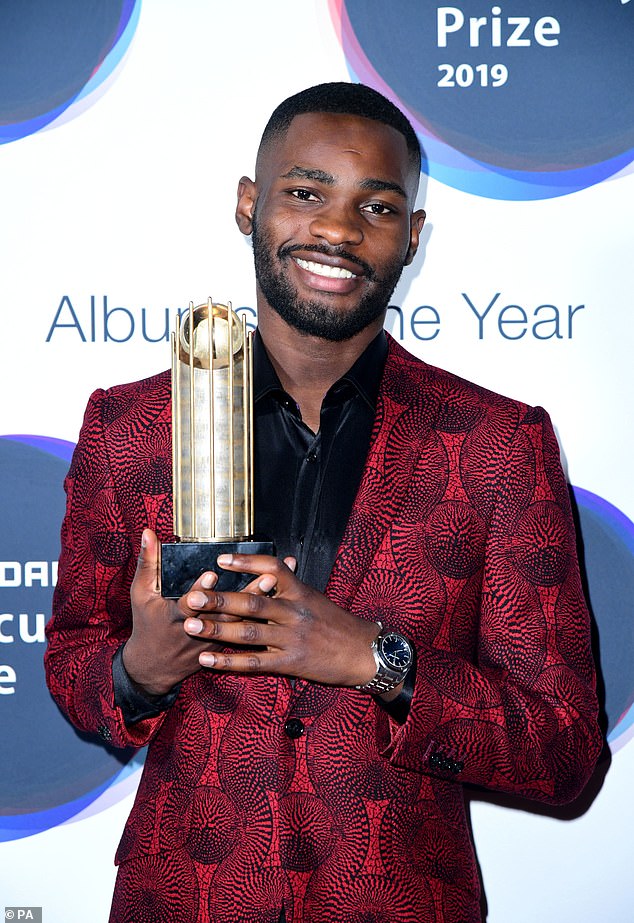 Delighted: The rap star was in high spirits as he proudly displayed his award after arriving for the ceremony in London 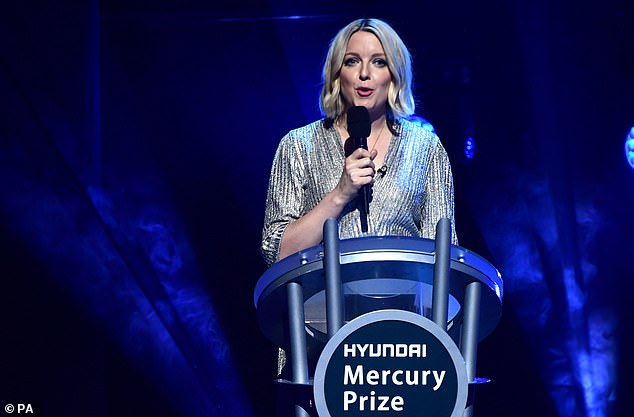 Glamorous: Lauren Laverne – who presented the ceremony – sparkled in her silver ensemble as she took to the stage 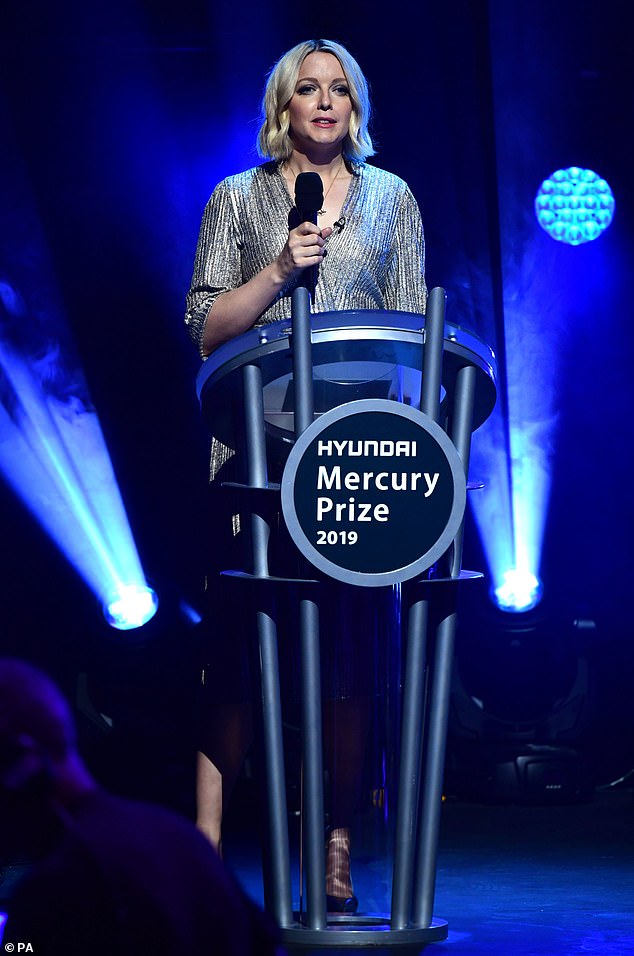 Chic: The Radio DJ – who recently took over as the host of Desert Island Discs – cut a chic figure as she hosted the ceremony 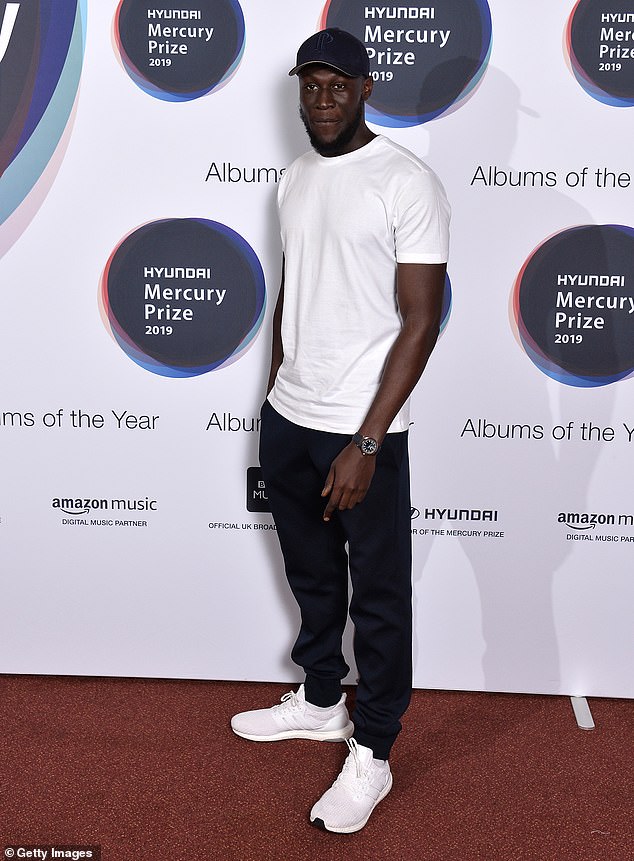 Proud: Grime superstar Stormzy was also in attendance as one of the judges on the panel who decided the top prize

Speaking about Dave’s album, the judging panel said: ‘Psychodrama is the musical equivalent of a literary masterpiece: a conceptual album about Dave’s experience of growing up in South London, structured in the form of a therapy session, which takes a deeply personal story and gives it universal relevance.

‘Psychodrama is a moving, musically sophisticated work that tackles complex themes of identity, class, relationships and politics and demands total attention from the listener.’

Apart from The 1975, all of the nominees for the top prize attended the ceremony and each received their own award for making the shortlist. 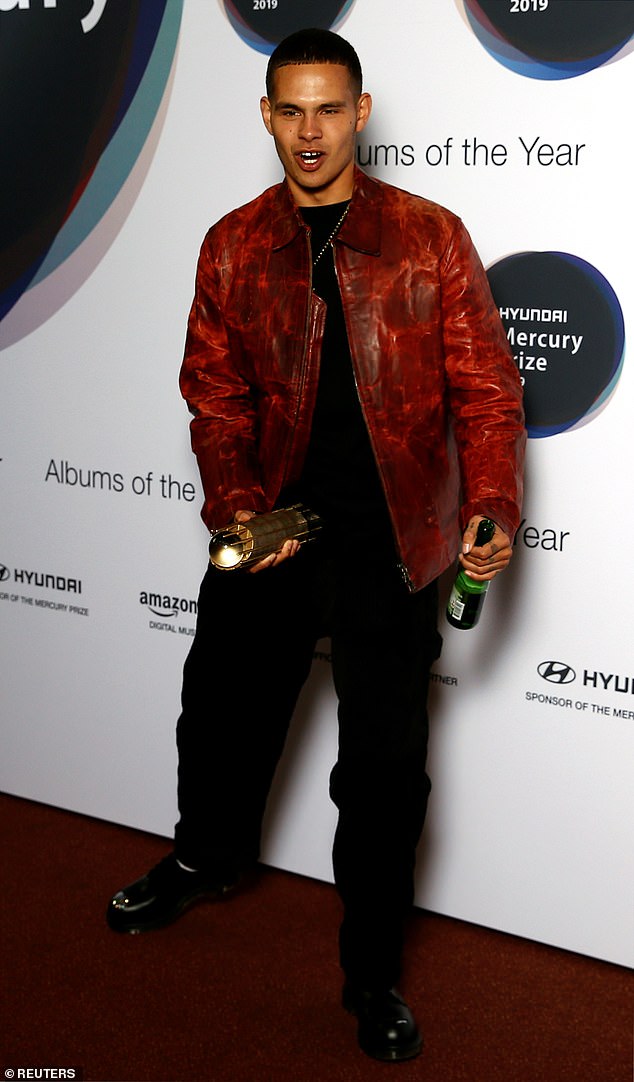 Explosive: But despite the night being a celebration of music, the ceremony was not without controversy, as rapper slowthai sparked fury among viewers (above on the red carpet) 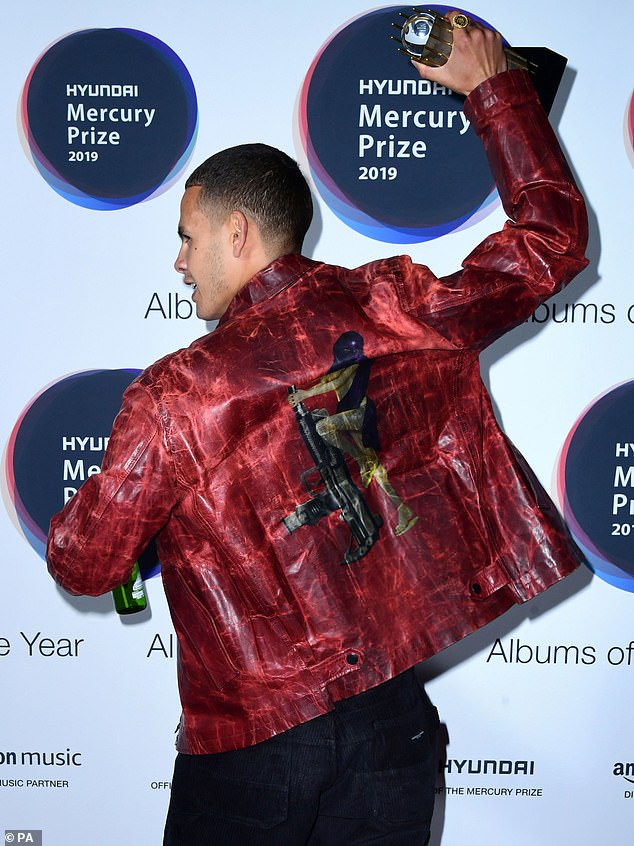 Controversial: The English rapper was nominated for his album Nothing Great About Britain, which casts a critical eye over life in the modern UK 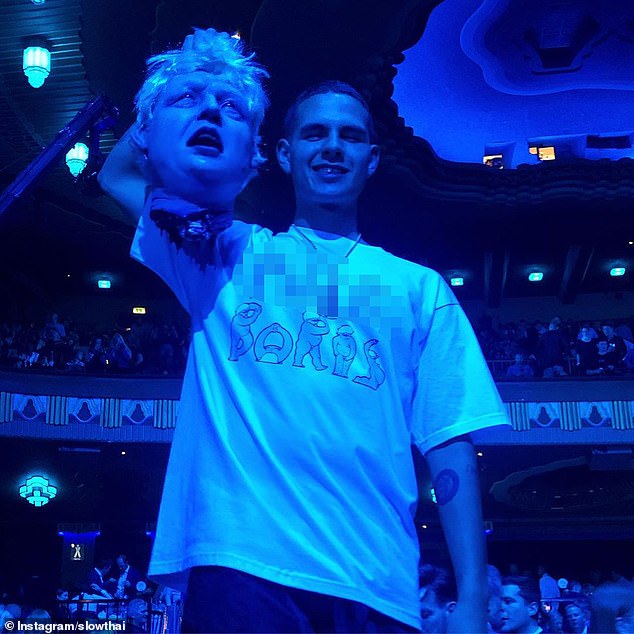 Raging: slowthai sparked anger by holding up an effigy of Boris Johnson’s severed head during his performance at the ceremony

But despite the night being a celebration of music, the ceremony was not without controversy, as rapper slowthai sparked fury among viewers.

The British musician took to the stage for his performance in a t-shirt emblazoned with the phrase ‘f**k Boris’ and soon presented an effigy of Prime Minister Boris Johnson’s severed head.

Slowthai was nominated for his album Nothing Great About Britain, which casts a critical eye over life in the modern UK.

The BBC live feed cut away from the rapper as he held up the effigy, but the audience responded with rapturous applause as slowthai (who spells his stage name with a lower-case S) left the stage.

But there was anger online with one viewer saying ‘someone’s probably going to end up getting killed because of this move,’ while another branded the stunt ‘dumb, embarrassing and dangerous.’ 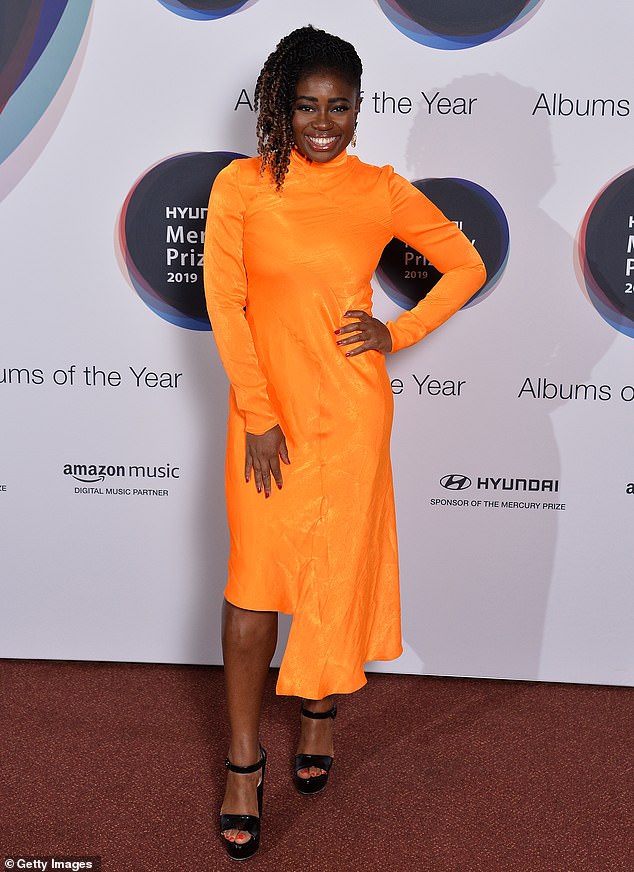 Stylish: Clara Amfo cut a stylish figure in an orange midi dress as arrived on the red carpet for the ceremony

Smart: Fellow judges Gaz Coombes of the rock band Supergrass and Jamie Cullum also made dapper arrivals for the ceremony