Chancellor Angela Merkel says Germany will keep pushing for global solutions to challenges in 2019 and also has to take greater responsibility in the world.

Closing a politically turbulent 2018 in Germany, Merkel devoted a significant part of her annual New Year’s address to the merits of bringing a multilateral approach to international problems – a style she has consistently defended in the face of U.S. President Donald Trump’s ‘America First’ tactics.

The fourth-term chancellor pointed to curbing climate change, managing migration and combating terrorism as the kinds of challenges that benefit from a wide view.

Germany starts a two-year stint on the U.N. Security Council on January 1st.

‘We want to resolve all these questions in our own interest, and we can do that best if we consider the interests of others,’ Merkel said in a text of the message her office released ahead of a scheduled Monday broadcast.

‘That is the lesson from the two world wars of the last century,’ she added. ‘But this conviction is no longer shared today by everyone, and certainties of international cooperation are coming under pressure.’

‘In such a situation, we must again stand up for, argue and fight more strongly for our convictions,’ Merkel said. ‘And we must take on more responsibility in our own interests.’ 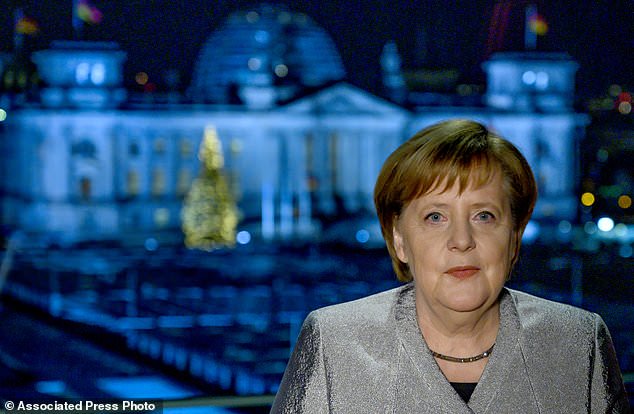 German Chancellor Angela Merkel said Germany will push for ‘global solutions’ at the U.N. and noted the country is spending more on humanitarian aid and defence

She said Germany will push for ‘global solutions’ at the U.N. and noted the country is spending more on humanitarian aid and defense. She said Berlin wants to make the European Union ‘more robust and able to make decisions.’

Turning to home, Merkel acknowledged that many Germans have ‘struggled very much’ with her latest government amid persistent infighting since it took office in March after unprecedentedly long talks to form the governing coalition.

She said it had been ‘an extremely difficult political year.’ 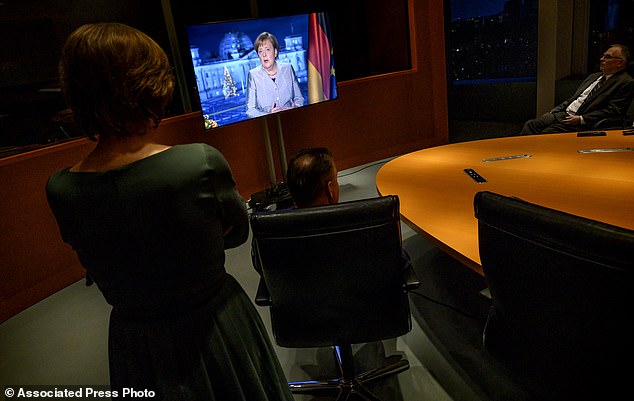 Merkel has said she plans to remain chancellor for the rest of this parliamentary term, which is supposed to run until 2021

Germany’s leader for 13 years said she set the stage for a ‘new beginning’ in late October by announcing she won’t seek a fifth term.

She also gave up the leadership of the conservative Christian Democratic Union, Germany’s main center-right party, which has been led since Dec. 7 by ally Annegret Kramp-Karrenbauer.

Merkel has said she plans to remain chancellor for the rest of this parliamentary term, which is supposed to run until 2021. But questions remain over whether she will actually stay that long, not least because of tensions within her governing coalition.

‘Democracy lives from change,’ she said in her new year message. ‘We build on what our predecessors left us, and shape things in the present for those who will come after us.’