A school teaching assistant who was compared to Mrs Robinson is facing jail for arranging to meet a 15-year-old pupil in a hotel bedroom.

Mother-of-two Lydia Beattie-Milligan, from Lydiate, Merseyside, repeatedly texted the victim saying ‘I cannot stop thinking about you’ and offering him a massage.

In one message, Beattie-Milligan, 43, was asked if she loved the boy, to which she replied: ‘You do batter my head, so maybe.’

She invited him to come to a hotel room in Haydock, and told a friend that she was excited about the meeting and had bought new underwear for the occasion.

The friend had believed she was meeting an agency teacher she had previously been in a relationship with at the time.

Mother-of-two Lydia Beattie-Milligan, from Lydiate, Merseyside, is facing jail for arranging to meet a 15-year-old pupil in a hotel bedroom

Cheryl Mottram, prosecuting, told Liverpool Crown Court: ‘She recalls that Lydia had been excited about the meeting and that she had bought new underwear… the Crown say she was clearly anticipating a sexual encounter.’

In court, Beattie-Milligan, who had 25 years of experience, claimed she had only taken his mobile number to ‘support him’, despite it being against school policy.

The boy had been suffering from anxiety issues and Beattie-Milligan said she had become close to him as she was also going through a difficult time.

She also claimed she arranged the meeting at the hotel room because she realised she had crossed a boundary in their teacher-pupil relationship and wanted to explain that to him.

But a jury took just an hour to convict her of arranging to meet a child following sexual grooming. 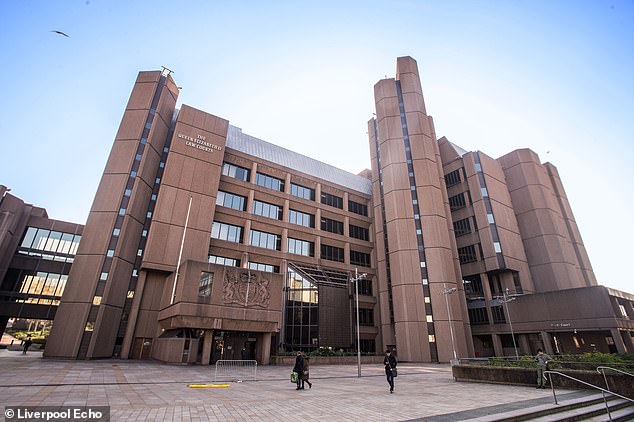 Liverpool Crown Court heard that the teaching assistant was asked if she loved the boy, to which she replied: ‘You do batter my head, so maybe’

Judge Gary Woodhall ordered her to sign on the Sex Offenders Register and said that she may be jailed. She was granted bail and a pre-sentence report was ordered.

After her conviction, her barrister Jason Smith said that she had been supported by her husband, who sat in the public gallery during her trial.

Concerns about Beattie-Milligan’s behaviour were first raised by another member of staff who noticed she was ‘acting too familiar’ with the boy, and paying him particular attention.

After she gave him bonus points in art, the staff member joked with the boy that he must be her favourite, at which point he showed him his mobile phone with messages from her arranging a night at a hotel for them both on a Saturday night.

She was suspended immediately and the police were informed.

When questioned about the messages in court, Beattie-Milligan defended herself by saying ‘I give everyone a kiss on my texts’.

She also said: ‘I was all over the place at the time… Now I think about it was completely wrong. He did make me happy. I think I may have been a little bit drunk, I cannot remember sending it.’

Beattie-Milligan claimed that a message saying ‘I have got all these feelings, so wrong, but I can’t help it’ was regarding emotional feelings, and that it did not mean ‘I wanted to jump into bed with him’.

She also said other text messages about ‘getting really turned on’ were about a learning facilitator at the school, and that was why her friend had said she was going to start calling her Mrs Robinson.