Turtle-y amazing! Mesmerising footage shows the greatest density of sea turtles ever recorded arriving at a wildlife sanctuary in Costa Rica to lay their eggs

Incredible drone footage has captured video of the largest ever gathering of sea turtles near a wildlife refuge in Costa Rica as they prepare to lay their eggs.

Every year hundreds of thousands of female sea turtles arrive at the Ostional Nacional Wildlife Refuge within a few days of each other.

Biologist Vanessa Bézy has been studying this phenomenon – called an arribada – and filmed olive ridley sea turtles aggregating in the ocean before reaching shore.

She said she saw thousands of turtles per square mile during the filming.

Sea turtles are at their most vulnerable to predators when they are tiny hatchlings on the beach and so large groups of mothers lay their eggs at the same time in the same area to increase the chance of their offspring surviving.

Using a drone she was able to film the ‘sea turtle swarm’ in November 2016 and described the scene as ‘the greatest density of sea turtle species ever recorded’.

‘I immediately knew there was something special going on. To this day I’m still blown away by the video. They look like bumper cars’, she told National Geographic.

The researcher says she wasn’t going to release the footage but has decided to make it public to raise awareness of the risks facing sea turtles.

She said they are increasingly threatened by growing numbers of tourists who can crowd the beaches at critical times as well as potential property developments.

Each small white dot in this picture is a sea turtle preparing to go onshore and lay their eggs. The turtles are ‘increasingly threatened’ by human interference and development say researchers 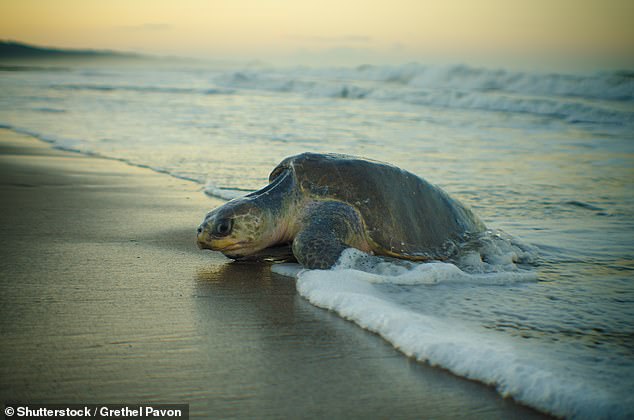 ‘On this day, there was an equivalent of about 5,000 sea turtles within the area of a football field, covering a total area of more than 1,000 football fields,’ she said.

‘And that’s not even counting the turtles below the surface.’

Roldán Valverde, scientific director of the Florida-based Sea Turtle Conservancy and a biologist at Southeastern Louisiana University said this was the first time she had seen footage showing a ‘turtle swarm’ in the sea.

“Most of the photography documenting this occurs on the beach’, she told National Geographic.

Why is almost every breed of sea turtle endangered? 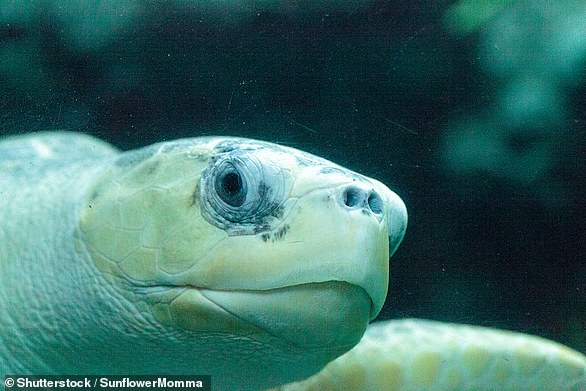 Turtles such as the Olive Ridley pictured are facing habitat destruction

Nearly all species of sea turtle is extinct because of human interference.

They are slaughtered for their eggs, meat, skin and shells, sea turtles suffer from poaching and over-exploitation.

They also face habitat destruction and being accidentally caught in fishing gear.

And climate change has also had a great impact on their survival.

On top of this, a rise in pollution levels in the sea has led to lots of sea turtle deaths.

The drone was used in a study to try to count the number of turtles as part of a study into their population and reproduction.

They estimated there were as many as 5,402 turtles per square mile.

Olive ridley sea turtles are considered under threat of extinction and their mass aggregations are vital to their life cycle, says Dr Bézy.

‘It’s an enigmatic natural phenomenon. We don’t know how the turtles coordinate this and why’, she told National Geographic. 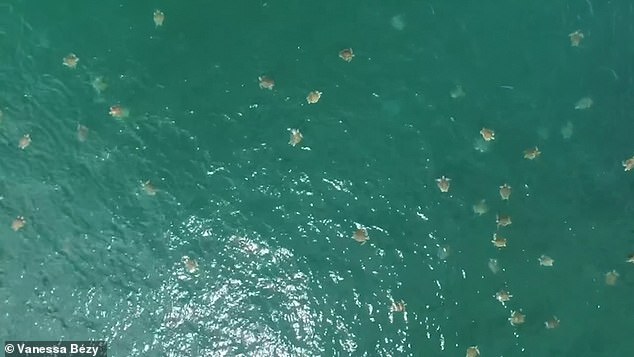 On the day this footage was filmed there was the equivalent of about 5,000 sea turtles within the area of a football field, covering a total area of more than 1,000 football fields

There is a significant threat to the wildlife refuge from companies wanting to develop hotels and tourist attractions in the area, as well as from tourists wanting to see the nesting turtles.

‘Within the same refuge is the fastest growing surf town in the world. The refuge administration struggles to manage the large influx of tourists’, she said.

‘It is going to take significant planning to introduce sustainable tourism at this site.’

Dr Bézy said she is hoping to raise money to open a centre to increase awareness of the dangers humans pose to turtles and ensure the sustainability of the refuge. 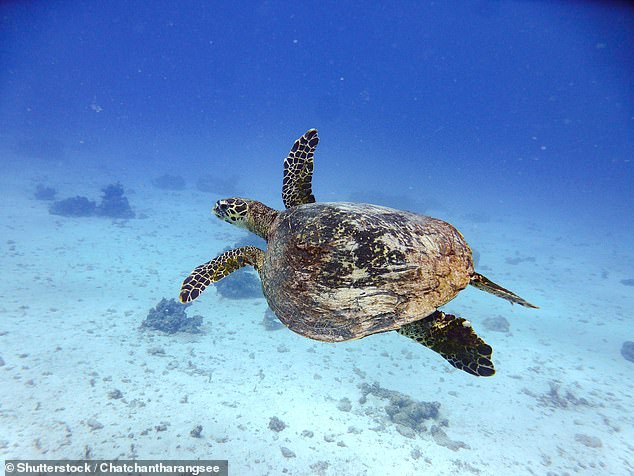 Olive ridley sea turtles such as this one are considered under threat of extinction and their mass aggregations are vital to their life cycle, says Dr Bézy 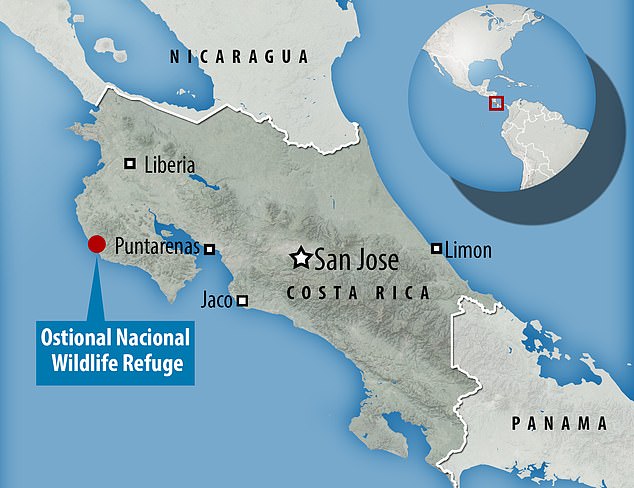 WHAT DO EXPERTS PREDICT FOR THE FATE OF THE PLANET’S PLANTS AND ANIMALS?

Nature is in more trouble now than at any time in human history with extinction looming over one million species of plants and animals, experts say.

That’s the key finding of the United Nations’ (UN) first comprehensive report on biodiversity – the variety of plant and animal life in the world or in a particular habitat.

The report – published on May 6, 2019 – says species are being lost at a rate tens or hundreds of times faster than in the past.

Many of the worst effects can be prevented by changing the way we grow food, produce energy, deal with climate change and dispose of waste, the report said.

– Turning forests, grasslands and other areas into farms, cities and other developments. The habitat loss leaves plants and animals homeless. About three-quarters of Earth’s land, two-thirds of its oceans and 85% of crucial wetlands have been severely altered or lost, making it harder for species to survive, the report said.

– Permitting climate change from the burning of fossil fuels to make it too hot, wet or dry for some species to survive. Almost half of the world’s land mammals – not including bats – and nearly a quarter of the birds have already had their habitats hit hard by global warming.

– Polluting land and water. Every year, 300 to 400 million tons of heavy metals, solvents and toxic sludge are dumped into the world’s waters.

– Allowing invasive species to crowd out native plants and animals. The number of invasive alien species per country has risen 70 per cent since 1970, with one species of bacteria threatening nearly 400 amphibian species.