Anna Wintour ensured there was no doubt about who reigns over the Met Gala by sporting a tiara as she arrived at this year’s event.

The 72-year-old fashion editor donned a glittering crown atop her signature sleek bob, the dazzling cherry on top of a very colorful beaded ensemble, which featured a feather-embellished cape, and a long matching skirt that flowed down to the ground.

Clearly thrilled to see her iconic event returning to the first Monday in May for the first time since 2019, Wintour went all out with the glitz and glam for the evening, eschewing her normal toned-down makeup in favor of a much bolder look, which saw her modeling a smokey eye and a vibrant pink lip.

Vogue’s editor-in-chief also left her signature sunglasses at home, instead choosing to accessorize with her glittering gold tiara and a matching necklace, which was just visible against the collar of her multi-colored beaded cape.

The dazzling accessories were in keeping with the theme of this year’s Met Gala: Gilded Glamour, a tribute to the iconic fashions of New York’s Gilded Age. 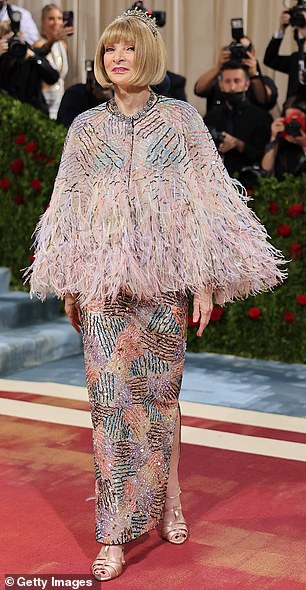 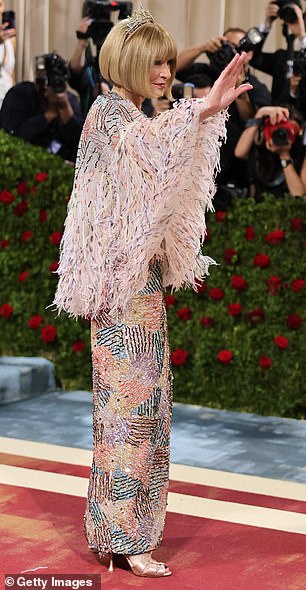 She wore the tiara with a dazzling multi-colored ensemble, which featured a feather-embellished cape over a matching skirt 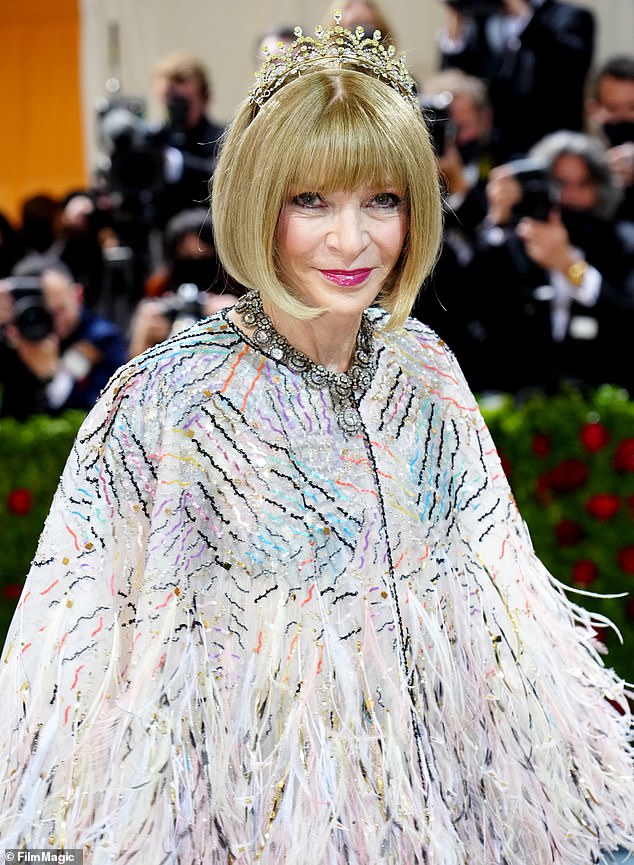 The 72-year-old eschewed her signature no-fuss makeup style in favor of a much more glamorous look, sporting a bold smokey eye and a vibrant pink lip color

Wintour also brought something else precious with her to this year’s event: her two children, Charles and Bee Shaffer, both of whom were accompanied by their partners.

Bee, 32, was joined by her husband, Francesco Carrozzini, 39, while doctor Charles, 37, walked the red carpet with his long-time wife Elizabeth Cordry.

Both women pulled out all the stops for the glittering soiree, with Bee – who gave birth to her first child, son Oliver, in November, donning a stunning black lace gown, which featured cutouts on both side of her waist, and distressed detailing at the back.

Her husband Francesco went for a classic look in a navy blue tuxedo, while his brother-in-law Charles went for an even more traditional black tailcoat, white waistcoat, and white bow tie.

Charles’ wife Elizabeth matched her husband in a black-and-white look, modeling a beautiful strapless gown that featured a huge skirt and long train. 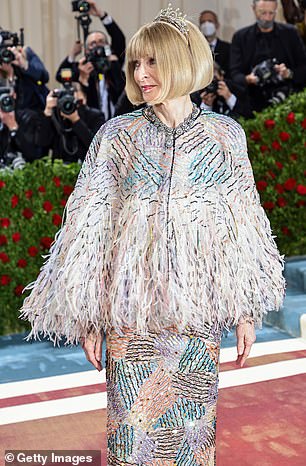 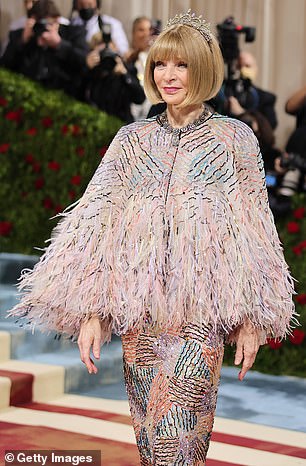 Wintour was one of the first guests to arrive at this year’s Met Gala, the theme of which is Gilded Glamour and sees attendees taking inspiration from the fashions of the Gilded Age 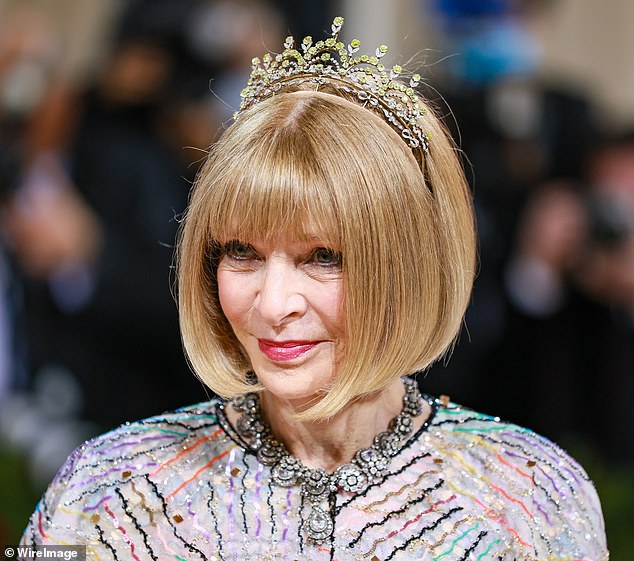 The Vogue editor-in-chief modeled her signature sleek bob, but she left her famed sunglasses at home for the night

The Met Gala marks a much more festive family outing for Wintour and her children, who last week came together to attend a memorial service for the late Andre Leon Talley in Harlem.

Talley died on January 18, 2022, at a White Plains, New York, hospital after suffering from a heart attack, believed to have been caused by complicated of COVID-19, and his sad passing left a gaping hole in the fashion world.

The memorial took place just a few days before the highly-anticipated Met Gala, which has been hosted by Wintour for nearly three decades, and has been branded by some as the biggest night in fashion; Talley helped plan the star-studded event for many years during his time at Vogue.

Talley and Wintour had been friends for more than a decade, however their relationship ultimately soured in the years leading up to his death.

In 2020, Talley unleashed a furious tirade against Wintour in his book, The Chiffon Trenches: A Memoir, claiming that their relationship left him with ’emotional and psychological scars.’

‘Anna is not capable of simple human kindness. I would love for her to say something human and sincere,’ he said.

‘I have huge emotional and psychological scars from my relationship with this towering and influential woman, who can sit by the queen of England, on the front row of a fashion show, in her uniform of dark glasses and perfect Louise Brooks clipped coiffure framing her Mona Lisa mystery face.’

After Talley’s death in January, Wintour acknowledged her ‘complicated relationship’ with the esteemed journalist, while paying tribute to her ‘magnificent’ friend.

In the statement, Wintour said the loss of Talley is ‘immeasurable,’ and that she will miss him, despite their ‘complicated past.’

The pair’s long-time friendship came to an abrupt end when she apparently cut him off for being ‘too old, too overweight, too uncool,’ he claimed.

He said the icy editor left him scarred after she made negative remarks about his weight – something he had been struggling with since the death of his grandmother.

In one scorching passage, he wrote: ‘She is immune to anyone other than the powerful and famous people who populate the pages of Vogue … I am no longer of value to her.’

Despite his comments, on the day after his passing, Wintour wrote: ‘The loss of André is felt by so many of us today: the designers he enthusiastically cheered on every season, and who loved him for it; the generations he inspired to work in the industry, seeing a figure who broke boundaries while never forgetting where he started from; those who knew fashion, and Vogue, simply because of him; and, not forgetting, the multitude of colleagues over the years who were consistently buoyed by every new discovery of André’s, which he would discuss loudly, and volubly – no one could make people more excited about the most seemingly insignificant fashion details than him.

‘Even his stream of colorful faxes and emails were a highly anticipated event, something we all looked forward to,’ she said.

‘Yet it’s the loss of André as my colleague and friend that I think of now; it’s immeasurable.

‘He was magnificent and erudite and wickedly funny – mercurial, too. Like many decades-long relationships, there were complicated moments, but all I want to remember today, all I care about, is the brilliant and compassionate man who was a generous and loving friend to me and to my family for many, many years, and who we will all miss so much.’