The only predictable thing about the British weather appears to be its unpredictability.

Now the Met Office is hoping to improve its chances of getting forecasts correct with a supercomputer worth £1.2 billion.

Built by Microsoft and funded by the UK government, the ‘world-leading supercomputer’ will provide experts more accurate warnings of severe weather.

It is expected to be the most advanced machine of its kind dedicated to weather and climate, ranking among the top 25 supercomputers in the world and twice as powerful as any other in the UK, the Met Office said.

The ‘environmentally sustainable’ supercomputer, powered by all renewable energy, will have a 10-year lifespan and is due to start working from summer 2022.

It comes as the country tries to better prepare for the impacts of increasingly extreme storms, floods and snow, which cost millions in damage.

The Met Office (pictured is its HQ in Exeter) will get a new £1.2 billion supercomputer built by Microsoft to improve the quality of forecasts

The technology will be able to produce more detailed models, improve forecasting of local-scale weather using high resolution simulations and supply the aviation industry with more accurate forecasts of wind and temperature.

It will also be useful to simulate the effects of global warming and extreme weather.

‘We are delighted to be working in collaboration with Microsoft to deliver our next supercomputing capability,’ said Penny Endersby, chief executive of the Met Office.

‘Working together we will provide the highest quality weather and climate datasets and ever more accurate forecasts that enable decisions to allow people to stay safe and thrive.

‘This will be a unique capability which will keep not just the Met Office, but the UK at the forefront of environmental modelling and high-performance computing.’

BENEFITS OF THE 2022 SUPERCOMPUTER 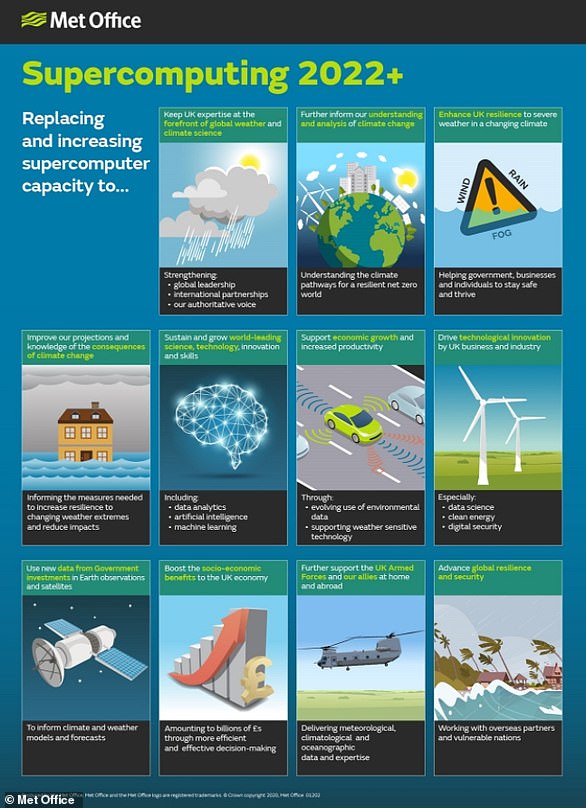 Once up and running in Summer 2022, the new supercomputer will help ensure government, industry and communities are better prepared for severe weather and a changing climate through:

1. More detailed models combined with an increased number of model scenarios and growing amounts of environmental and social data will mean that forecasts and projections for risk-based planning will be improved.

One example of how this will be used is in creating very detailed city scale simulations to provide localised climate information to improve city design, such as public transport infrastructure.

2.  Better forecasting of local-scale weather using very high-resolution simulations that can be quickly turned on in an area where severe weather is forecast. This will enhance emergency preparedness to local storms, heavy rain and flooding.

3. Increased access to ever greater amounts of weather and climate data, providing businesses with new opportunities to innovate and create new services based on this information.

4.  Ever more accurate forecasts of wind and temperature information for the aviation industry driving ever greater fuel efficiency and safety. This will deliver economic and environmental benefits as part of the post-Covid recovery.

Once operational, the UK public may not realise the full effects the supercomputer will have because it will allow smoother air travel and help to prevent disasters such as flooding, Endersby added.

‘In the short term, you will see a more accurate weather forecast that may be more detailed to your area and you may be able to tailor it more, but actually it impacts your lives in ways you don’t know about,’ Endersby told PA.

‘For example, we provide services to aviation, that enables planes to fly more efficiently and safely by knowing exactly where the winds are going to be and where turbulence is going to be, so you won’t realise that the supercomputer is making your flight safer, smoother, more efficient, but it will.’ 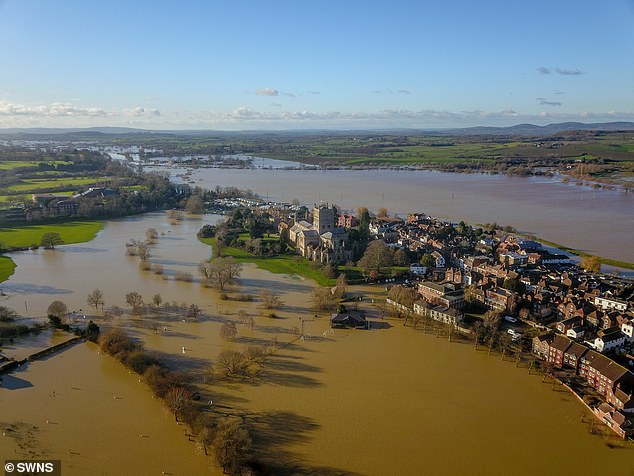 The machine will provide better forecasting of local-scale weather, which will enhance emergency preparedness to local storms, heavy rain and flooding. Pictured is an aerial view of flooding around Tewkesbury, December 24 2020

THE QUEST FOR NET ZERO EMISSIONS

The report commits to ensuring that the emissions generated by the UK are offset by removing the same amount of carbon from the atmosphere.

There are two main ways this can be achieved – by planting more trees and by installing ‘carbon capture’ technology at the source of the pollution.

Some critics are worried that this first option will be used by the government to export its carbon offsetting to other countries.

International carbon credits let nations continue emitting carbon while paying for trees to be planted elsewhere, balancing out their emissions.

Business Secretary Kwasi Kwarteng said the partnership between Microsoft and the Met Office is a ‘ringing endorsement for the UK’s credentials in protecting our environment’ as we prepare to host COP26 later this year.

COP26, or the 26th annual United Nations Climate Change Conference, will be held in Glasgow in November.

‘The new supercomputer, backed by a billion pound UK government investment, will act as a catalyst for unlocking new skills, technologies and jobs right across our economy – from data scientists to AI experts – all as part of our efforts to build back better and create a cleaner future,’ said Kwarteng.

There will be two generations of the new supercomputer, the Met Office revealed – the second will be refreshed after five years of service, in 2027.

‘Generation one’, operational from 2022, will provide six times the capability of the Met Office’s current supercomputer, while generation two (from 2027) will provide around an 18 times increase in capacity.

The new machine will also be one of the world’s most environmentally sustainable supercomputers, powered using 100 per cent renewable energy, which is expected to save 7,415 tonnes of carbon dioxide (CO2) in its first year of operation.

The UK government had committed £1.2 billion into building the state-of-the-art supercomputer in February last year, as part of a commitment to reach our net zero emissions target by 2050. 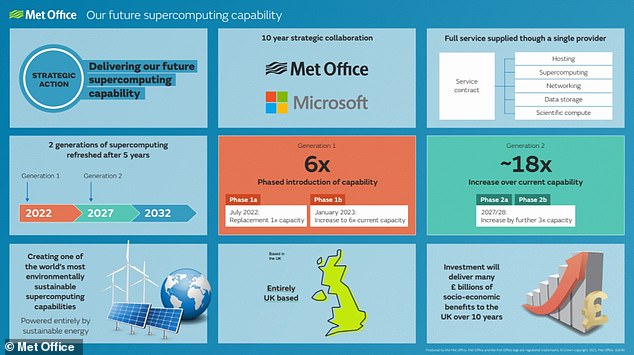 There will be two generations of supercomputing, the Met Office said – the second will be refreshed after five years of service, in 2022.

It will also replace the Met Office’s Cray XC40 supercomputing system – already one of the most powerful in the world dedicated to weather and climate.

Cray XC40 consists of three main systems – an identical pair of machines and a single larger system in a purpose-built data centre nearby.

The three systems are capable of more than 14,000 trillion arithmetic operations per second – more than 2 million calculation per second for every man, woman and child on the planet. 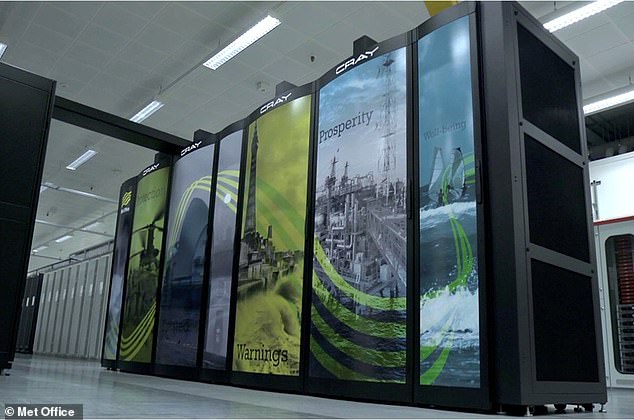 Pictured, Cray XC40 supercomputing system, which consists of three main systems – an identical pair of machines and a single larger system in a purpose-built data centre nearby

Because of improved science and increased computing power, today’s four-day forecasts are as accurate as one-day forecasts were 30 years ago.

The Met Office has often come in for stick when its predictions have gone awry.

The most famous example was in 1987 when BBC weatherman Michael Fish assured a viewer that a hurricane was definitely not on its way.

The next day devastating hurricane-force winds tore across the UK, killing 18 people– and causing £1 billion ($1.3 billion) of damage.

In fairness, the Met Office’s main supercomputer in 1987 had the equivalent processing power of an average smartphone today.

In 2017, the Met Office said the Cray supercomputer currently in use would still not have been able to predict the full extent of the Great Storm in 1987.

MailOnline has contacted the office regarding whether the new machine would theoretically have been able to do so.

– Are capable of over 14,000 trillion arithmetic operations per second – that’s more than 2 million calculation per second for every man, woman and child on the planet.

– Contain a total of 460,000 compute cores. These are faster versions of those found in a typical quad-core laptop.

This power allows the Met Office to take in 215 billion weather observations from all over the world every day, which it then takes as a starting point for running an atmospheric model containing more than a million lines of code.

By the end of its life, Cray XC40 will have enabled an additional £2 billion of socio-economic benefits across the UK through its prediction of severe weather and related hazards, the Met Office says.