Met Office warns of 80mph gales, heavy rain and flooding as Storm Diana sweeps in from the Azores

Gale-force wind and heavy rain is set to herald a ‘major change’ in the UK’s weather as Storm Diana sweeps in from the Atlantic tomorrow, even posing a risk to life in some areas of the country.

The recent cold and sunny spell seen by many is set to be blown away by flooding and gales, some severe, in the middle of the week.

In response, the Met Office has issued several severe weather warnings across the UK, with strong winds and downpours expected across much of Wales, Northern Ireland, western England and Scotland.

It added there was a small chance that injuries and danger to life ‘could occur from large waves and beach material being thrown onto sea fronts, coastal roads and properties’ in coastal areas such as Cornwall.

Storm Diana, named by the IPMA Portuguese weather service, is currently threatening the Azores and is due to make itself felt mainly over western parts of the UK on Wednesday.

Dan Harris, deputy chief meteorologist at the Met Office, said: ‘It now looks very likely that we will see a major change in the UK’s weather early in the week ahead.

Gale-force wind and heavy rain is set to herald a ‘major change’ in the UK’s weather as Storm Diana sweeps in from the Atlantic tomorrow, with weather warnings in place for later this week 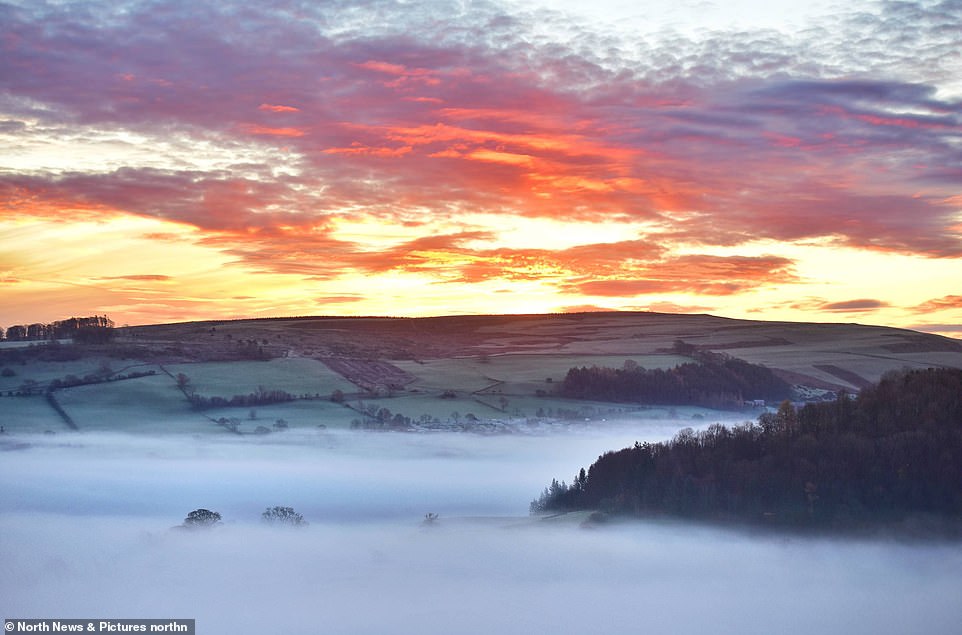 The calm before the storm: Fog nestles above the edges of Ullswater at daybreak this morning. The weather is set to take a turn for the worse later this week 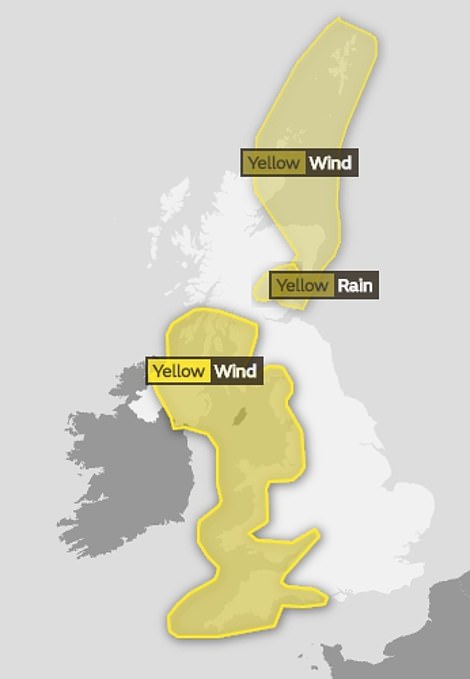 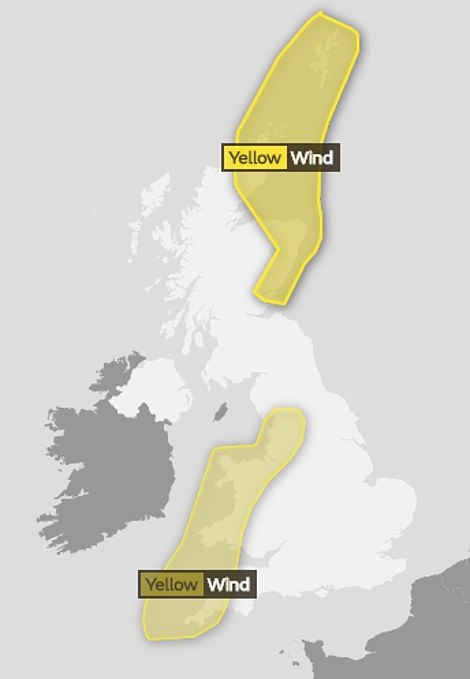 The Met Office has issued several severe weather warnings across the UK for Wednesday (left) and Thursday (right), with strong winds and downpours expected across much of Wales, Northern Ireland, western England and Scotland

‘We expect spells of wet and windy weather to sweep across the UK from the south west from Tuesday, although at the moment there is uncertainty around the timing and the focus for the heaviest rain and strong winds by Wednesday as Storm Diana approaches our shores.’

Monday is expected to remain chilly and bright for most parts, although there will be some showers in the east.

Temperatures are expected to reach a maximum of 10C (50F) in the south west, with highs of 4C (39F) to 7C (44F) expected elsewhere, with fog patches a risk as the mercury dips again overnight.

Conditions are expected to start to turn on Tuesday, with wet and windy weather pushing in from the south west.

A separate system to Diana, the front will move eastwards bringing rain and blustery conditions to all parts by the end of the day.

After building in the Atlantic, Storm Diana is due to arrive on Wednesday as a low pressure system tracks to the north of Ireland. 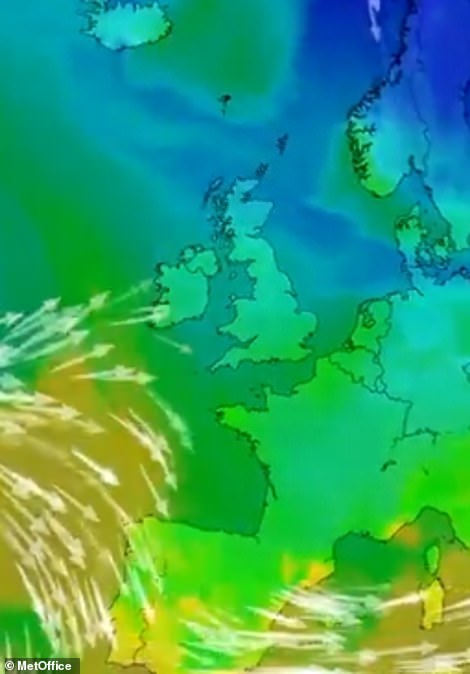 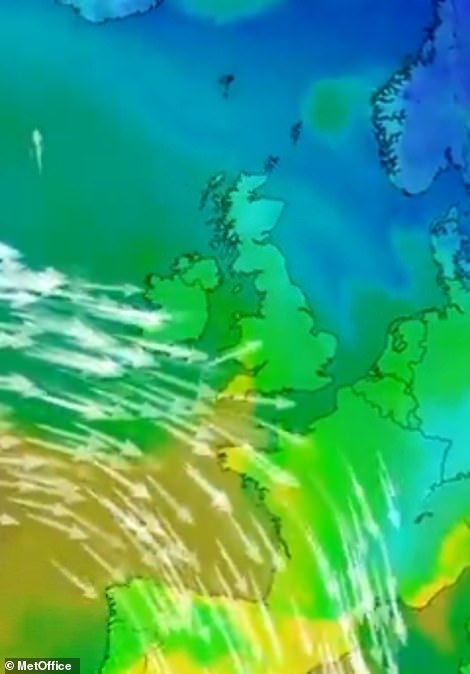 Britain will be wet and windy this week thanks to an Atlantic weather front moving in from the west on Tuesday (pictured moving in today, left and arriving on Tuesday right) before Storm Diana arrives bring strong gusts on Wednesday

A three-day forecast shows how before the cold weather fronts creeps in from the Atlantic Ocean on Tuesday, conditions will still be chilly, with frost expected on Sunday and Monday nights, which could cause problems on the roads 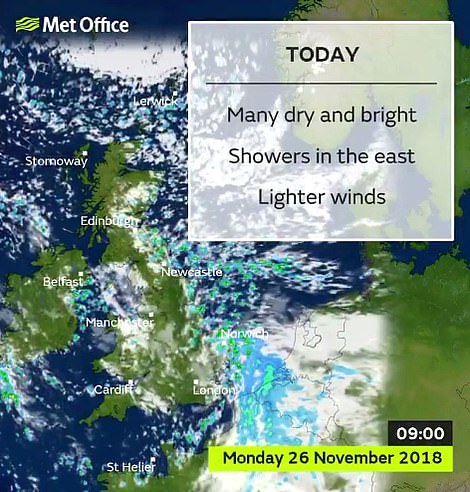 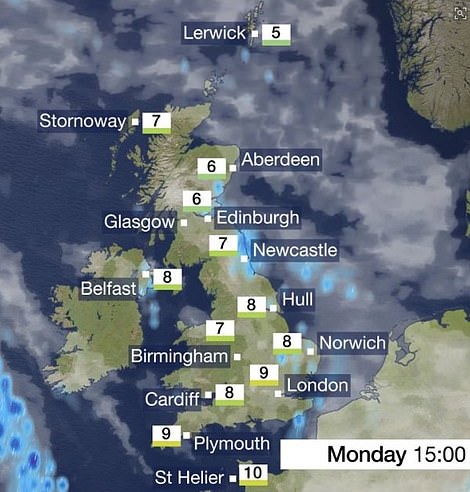 Today is set to be a dry and bright day with scattered showers in the east and some light winds. Shown is the forecast this morning (left) and this afternoon (right)

Gales of up to 60mph could be seen over western parts of the UK, with heavy rain, although the storm is expected to move through relatively quickly.

The arrival of Diana following a wet Tuesday could see rain totals of between 60mm and 80mm in some western parts over the two days.

Storm Diana is expected to move away during Wednesday evening, although showers are likely to persist into Thursday.

Temperatures are predicted to be mild, with highs of 15C (59F) possible in the south east on Wednesday and Thursday – around 5C (9F) above average for the time of year.

Storm Diana was named by IPMA due to its effects first being felt by the Portuguese Azores.

The next winter storm that affects the UK first will likely be named by the Met Office, with Deirdre next on a list of names chosen by the public. 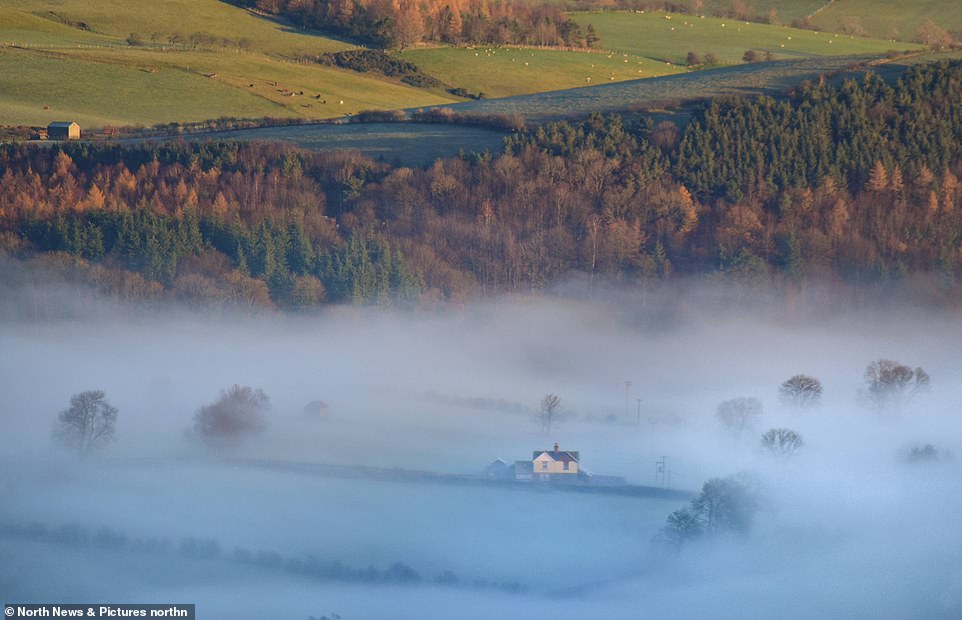 A blanket of fog covers the ground on the edges of Ullswater this morning. Gales of up to 60mph could be seen over western parts of the UK, with heavy rain, although the storm is expected to move through relatively quickly 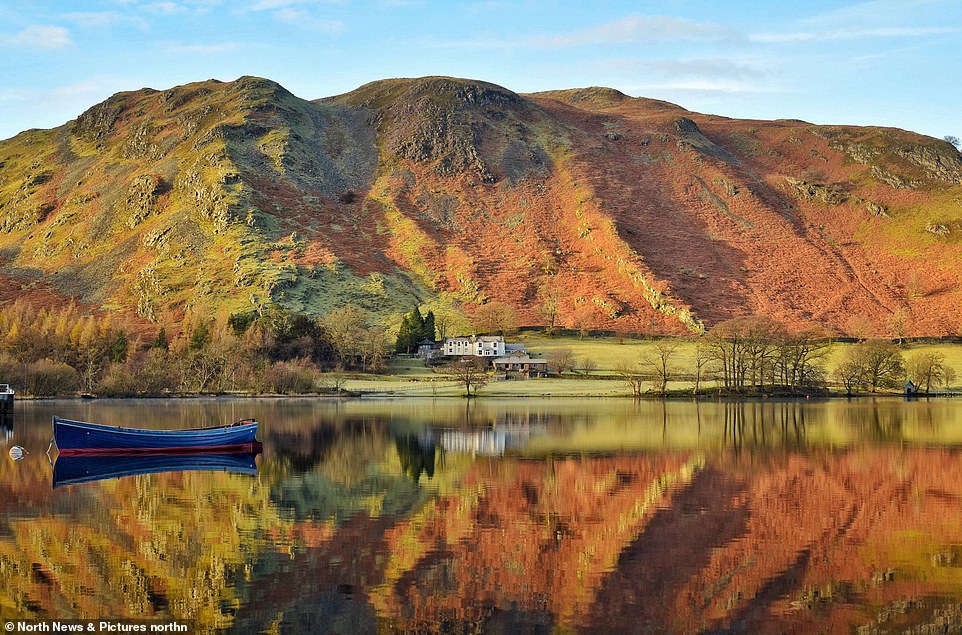