Shocking video shows a police officer punching a suspect on the ground while another officer tells him ‘stop f****** moving or I’m going to hurt you’.

The incident, which took place in Ilford, London, saw a total of three officers trying to restrain the suspect.

At one point another officer appears to stamp on him.

The footage appeared on social media posted by a local woman, who was apparently an eyewitness, on 18 April.

The Met police told MailOnline it was aware of the images and said, ‘it is important not to pre-judge what has happened.’

‘Police officers work in difficult conditions, and on occasion, have to use force to achieve their lawful objectives.

‘The footage on social media may capture only a small part or only one view of the incident, the MPS will always endeavour to establish the full circumstances.’

A series of clips show the struggle between the officers and the individual as filmed from a distance.

As the first video begins, two officers are seen restraining the suspect who is partially obscured by a fence.

A female officer holds one arm while another policeman helps, suddenly the male police officer draws back his arm and lands a forceful punch onto the suspect.

A loud groan is heard as the blow connects and the police officer shouts:

Shocking video shows a police officer punching a suspect on the ground in Ilford, London

‘Get your arm down.’ At this point a third officer approaches and appears to stamp on the suspect before using his foot to hold him in place.

A second video shows the third police officer shouting at the man saying: ‘Stop f****** moving or I’m going to hurt you.’

The female officer appears to struggle to get him to keep still and so the third officer responds by forcefully stamping on him again. 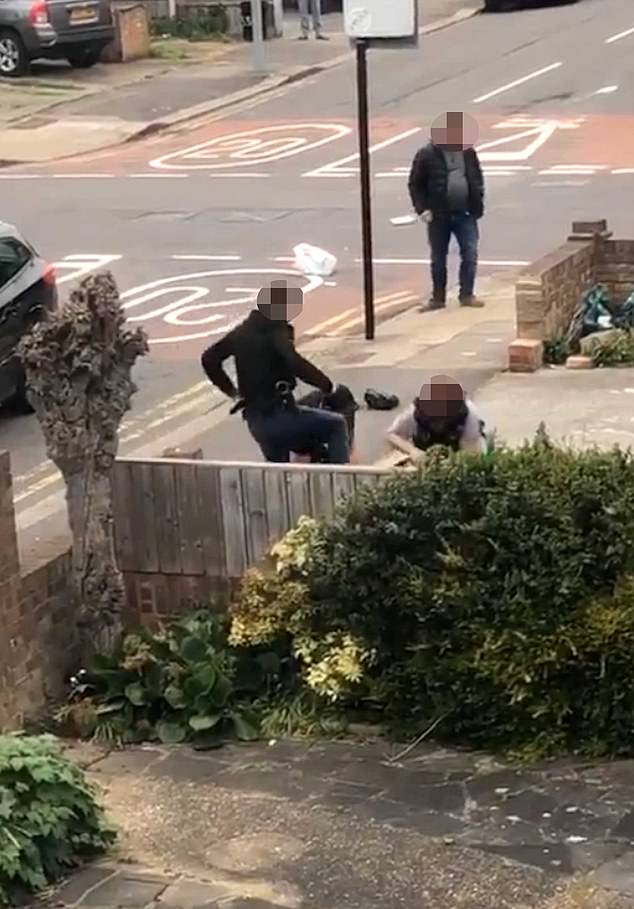 The incident, which took place in Ilford, London, saw three officers trying to restrain the suspect, with one officer appearing to stamp on him

More police arrive on the scene and as the final clip ends, the man can be heard shouting: ‘Get off my head.’

The videos were uploaded to Twitter by user @MiaFBabyx who shared them captioned: ‘Are the Police allowed to do this? I’m shocked by what I’ve witnessed.

‘Suspect may be resisting arrest but this is too much!

‘I heard a very loud thud which I’m assuming they run him over and then jumped on him he can be heard wheezing deeply. Then I began filming,’ @MiaFBabyx told MailOnline.

She then tagged several law enforcement accounts asking them to look into the incident.

The Met Contact Centre responded to the video asking her to message them with further detail.

The Met Police told MailOnline it has requested more information but haven’t to date received information that would allow it to obtain more details about the incident or police action. 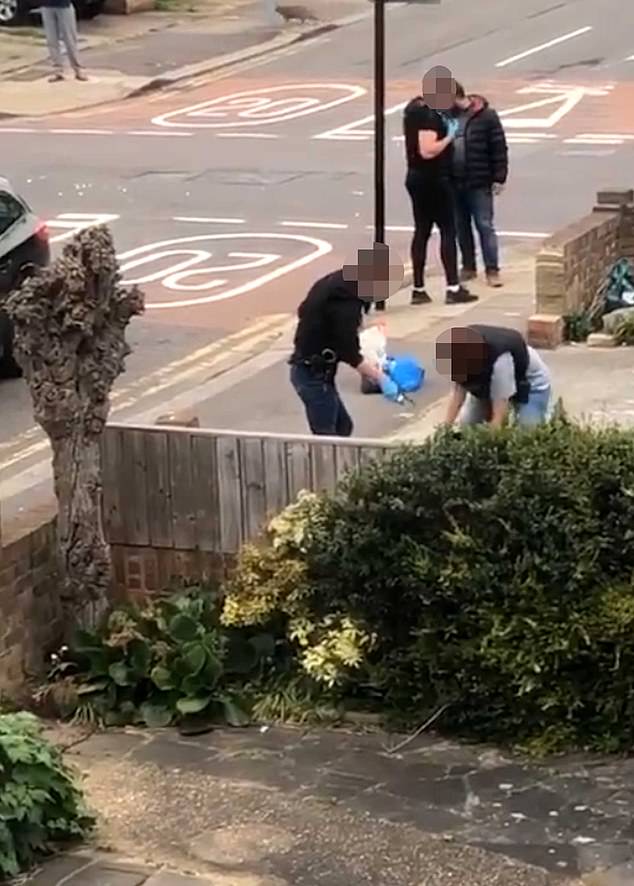 The videos were uploaded to Twitter by user @MiaFBabyx who shared them captioned: ‘Are the Police allowed to do this? I’m shocked by what I’ve witnessed.  The Met Contact Centre responded to the video asking her to message them with further detail

@andreix04 said: ‘3 officers kicking down one man, is he the hulk?’

@Ghanian-Queen added: ‘You better find, fire and persecute those officers.’

It’s not the first time the Metropolitan Police have been accused of heavy handedness.

Last week, officers in Lewisham, south-east London were criticised for handcuffing a black man who was complying with a stop and search.

Since the video was shared on social media, the Metropolitan Police have been accused of racial profiling.

Reacting to the incident in Lewisham, the Met Police issued a statement:

‘Officers on a proactive operation to tackle crime in Lewisham on May 21, detained a number of individuals in the area of Gilbert Road, SE8.

‘Acting on intelligence received regarding drugs activity in the area, a male was detained for the purpose of a search under s23 Misuse of Drugs Act at approximately 4.57pm.

‘Nothing was found and the man was not arrested.

‘The man was provided with details of the officer who conducted the search, and informed of his entitlement to gain a copy of the search record and how to progress this in line with standard protocol.’