Police and prosecutors have apologised for withholding text messages which nearly led to a man being wrongly convicted of rape.

Liam Allan, 22,  spent two years after being accused of rape and sexual assault as police sat on text messages which his accuser has sent.

But he was acquitted of the charges in December after text messages sent by the alleged victim revealed she had fantasised about rough and violent intercourse.

A joint review by the Met Police and CPS has now put the blunder down to ‘a combination of error, lack of challenge, and lack of knowledge’.

The review stated: ‘There is no evidence that the phone download was withheld deliberately by the OIC (officer in the case) or CPS (Crown Prosecution Service) prosecutors.

‘The disclosure problems in this case were caused by a combination of error, lack of challenge, and lack of knowledge.’

Mr Smith said: ‘He received a personal apology from us both and I was really pleased to have that opportunity to meet with him face-to-face, allow him to read the report and apologise for the errors that were made.’

Mr Allan previously said he was ‘dragged through hell’ for two years after police failed to provide the messages proving his innocence to his defence team. 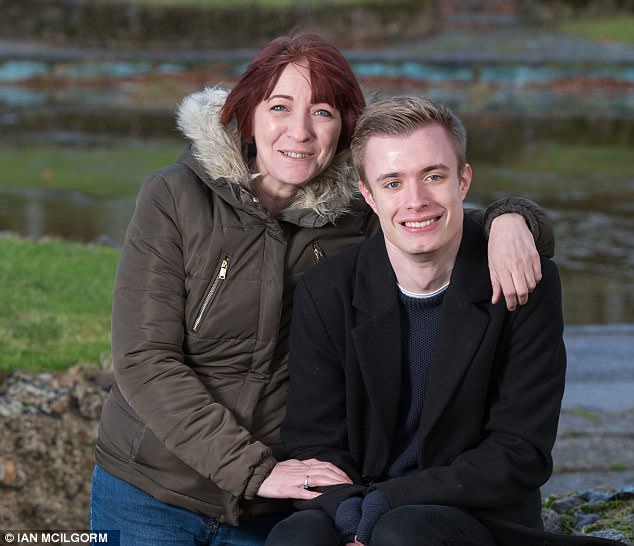 Mr Allan, pictured with mother Lorraine, said he had been ‘dragged through hell’ by the ordeal

Telling of the moment he was told the case had collapsed, he previously said: ‘I was speechless and then I just started screaming the whole house down.’

He said of his accuser’s claims: ‘I think it started with a little white lie she told to a friend and her boyfriend at the time..

‘But it completely spiralled out of control and it became a story she had to stick to. She completely lost control of what happened.

‘I would say that the two people she had told this lie to added fuel to the fire to the point where she couldn’t go back on it.’

The prosecutor in the case, Jerry Hayes, said he went to the officer in charge of the case after the trial had started and discovered the existence of a disk of the woman’s messages.

Mr Hayes said the officer told him it was ‘not disclosable’ as it contained’ very personal matters’.

But when the prosecution and defence lawyers saw the messages they realised they ‘blew the case out of the water’.

Mr Hayes said after the case collapsed: ‘If they had not been seen this boy faced 12 years in prison and on the sex offenders’ register for life with little chance of appeal. This was a massive massive miscarriage of justice, which thank heavens was avoided.’