But Met Police Commissioner Cressida Dick admitted that forces could not ignore the fact the groups had secured large numbers of convictions and been praised by the courts.

She said there were risks but that ‘on occasion’ officers could work with volunteer investigators who posted their stings online.

‘I think we need to look at it very seriously. But there are all sorts of risks, so if anybody is listening, I would suggest please do not start doing this,’ she said.

Her comments signal that a ban on police co-operating with often controversial vigilantes could soon be lifted.

Despite the ban on formal co-operation, police have revealed they used evidence from vigilantes in almost half of child sexual grooming cases put forward for prosecution in recent months.

Groups such as Dark Justice and The Hunted One have won huge online followings but police fear they could be putting themselves and suspects in danger.

Earlier this week Chief Constable Simon Bailey, who is responsible for tackling child abuse nationwide, said he was losing the argument that the groups did more harm than good.

Speaking on LBC Radio, Miss Dick said it made sense to do everything possible to bring paedophiles to justice. 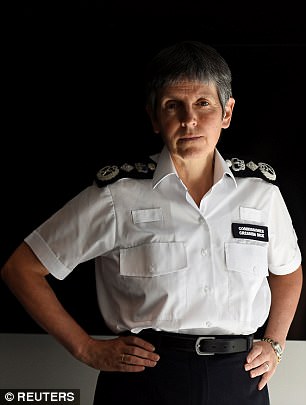 But she said ‘significant concerns’ remained about people going online and posing as children.

‘Our concerns come from the fact that they may put themselves at risk. They may, by making a misidentification, put someone else at risk,’ she said. ‘And they may, and this isn’t uncommon, actually prejudice another investigation, or indeed not handle the evidence in a proper way, which could result in somebody going free. That’s why there’s been such caution from the police.’

Miss Dick added that she could not ‘alter the fact’ that judges had praised paedophile hunters and ‘quite a large number of convictions’ had been secured. Vigilantes are active in London, the Home Counties, Birmingham, the North West and across the rail network, as targets often agree to meet at stations.

They all run websites where they post often shocking footage and photographs of the stings and updates on subsequent prosecutions.

Last year, 114 police cases for ‘meeting a child following sexual grooming’ came from volunteer stings, a substantial rise from just 20 two years earlier. Of the total number of prosecutions for this offence last year, 44 per cent were based on evidence from paedophile hunting gangs.

In July, Gwent police and crime commissioner, Jeff Cuthbert, called for more co-operation between police and hunters. He said: ‘There are training implications, it would have to be done in a planned way – the right way – but I think in terms of the principle, it’s the right way forward.’

Police threatened a clampdown on paedophile hunting groups after a disastrous sting broadcast online live from the Bluewater shopping centre in Kent at Easter.

Vigilantes ambushed a man in his 20s suspected of grooming what he thought was a 14-year-old girl named Scarlet, but ended up having to protect him, as shoppers watching the sting on Facebook Live raced across the centre and tried to attack him.