A 28-year-old tech worker believes he has found the perfect way to see the world while working remotely – by buying a studio on a cruise ship.

Austin Wells, from San Diego, has bought a 12-year lease on the MV Narrative, purchasing a 237-square-foot apartment.

The cruise ship will launch in 2025 and Wells, who works for Facebook’s parent company Meta, intends to take up residency for at least three years as it circumnavigates the globe, while he works.

‘The thing that most excites me is I don’t have to upend my daily routine, in order to go see the world,’ said Wells, speaking to CNBC. 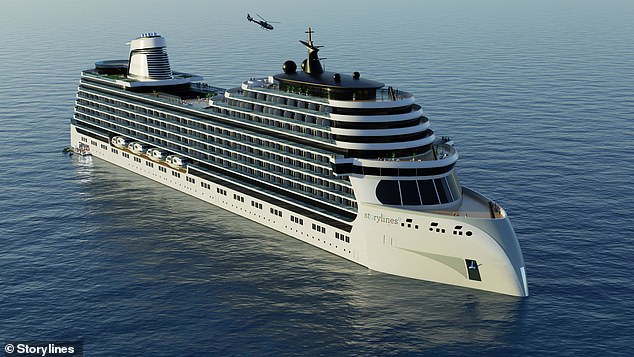 The MV Narrative is due to set sail from Croatia, where it is being built, in 2025 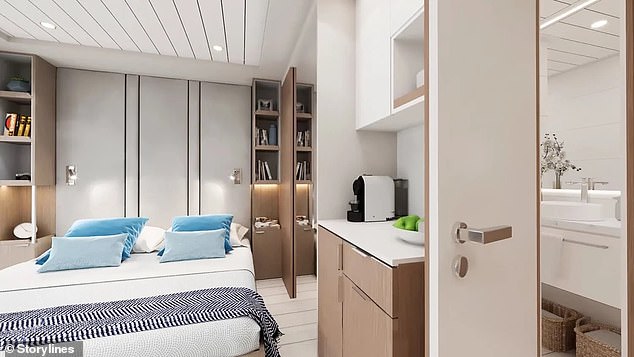 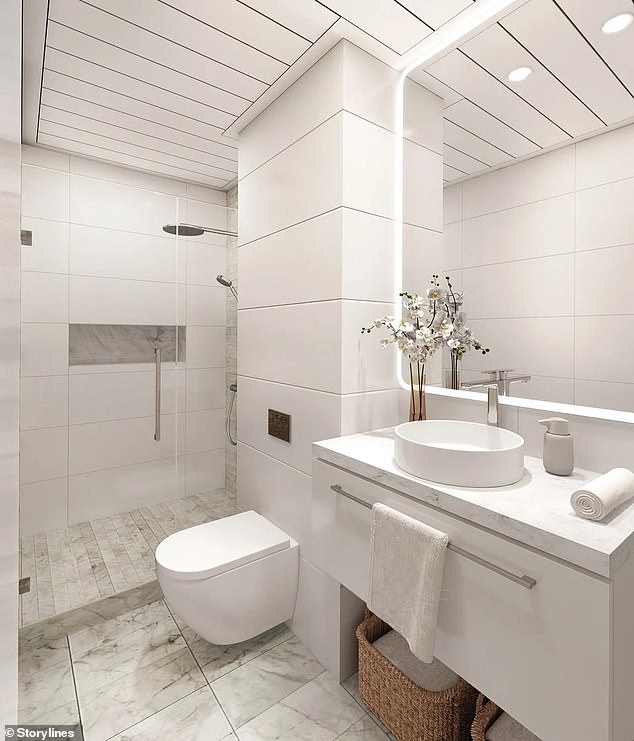 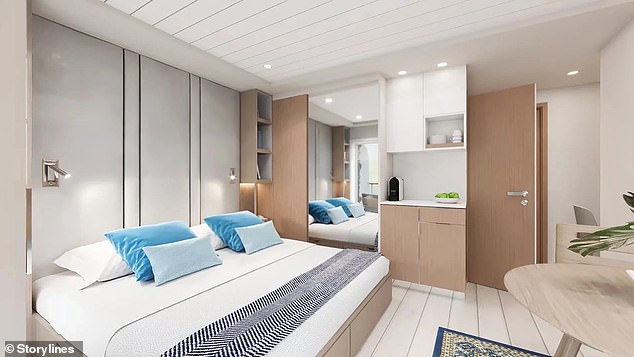 Wells’ apartment is the cheapest available: the top end property is on sale for $8 million

‘I’m going from this model where you want to go somewhere, you pack a bag, you get on a flight, you rent a room; to now my condo, my gym, my doctors and dentists, all of my grocery stores travel the world with me.’

The MV Narrative will have 547 floating condominiums, with Wells’ the most humble.

Top of the range is a two-floor, four bedroom apartment that ranges over 1,970 square feet, and is for sale for $8 million.

Most apartments are offered for a 24-year or lifetime (60-year) lease, but Wells secured a shorter term as part of a promotion to entice new residents.

Wells said he had always been fascinated by large ships, describing them as ‘a marvel of engineering and economics’, and was excited about experiencing it. 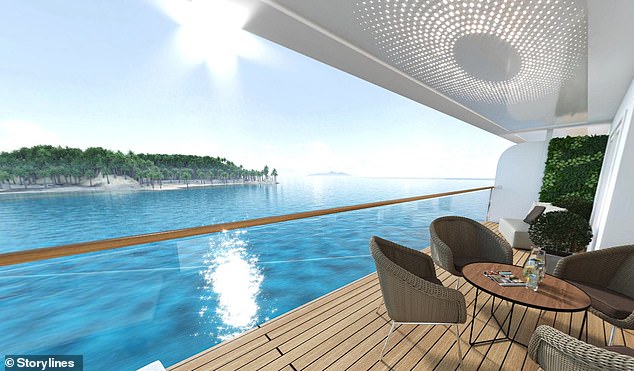 The more expensive apartments feature balconies, such as the one advertised in this computer-generated image 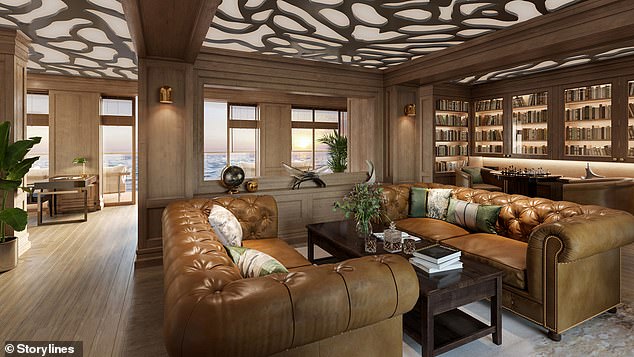 A library and meeting area is pictured inside the ship

He said he was looking forward to exploring ‘harder-to-reach destinations or sea-based destinations like beautiful dive spots’.

Wells added: ‘It’s just like owning a condo. You can sell it, you can rent it.’

The company behind the project, Storyline, has a team that will help with sales and rentals – something Wells said was important, to ensure the ship ‘feels alive’.

A studio apartment like the one Wells bought could generate around $4,500 a month, according to a calculator on the Storylines website.

The ship will have a deck with a Champagne and whisky bar, cigar lounge and small pool at one end. 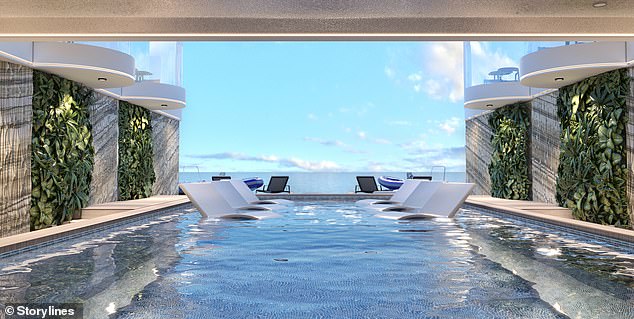 One of three swimming pools onboard the MV Narrative is pictured

The ship will also have a theater for performances and movies, but is not planning on staging the extravagant entertainment typical of regular cruise ships.

The company hopes that people from all walks of life will join, including families.

Residents will have to pay a monthly $2,100 per person in an ‘all-inclusive living fee’, which covers food and drinks from the ship’s restaurants and bars, laundry, fitness classes and medical checkups.

Wells’ studio works out a $2,083 a month for the 12 year lease, so with the living fee included his total cost will be significantly lower than renting a one-bedroom apartment in Manhattan.

He plans to continue to work U.S. West Coast hours as the ship visits European cities.

‘My working hours will be shifted towards evenings, nights and very early mornings,’ he said.

‘But that does open up the ability for me to maybe see a city midday to afternoon and then start my workday around six or 7pm.’ 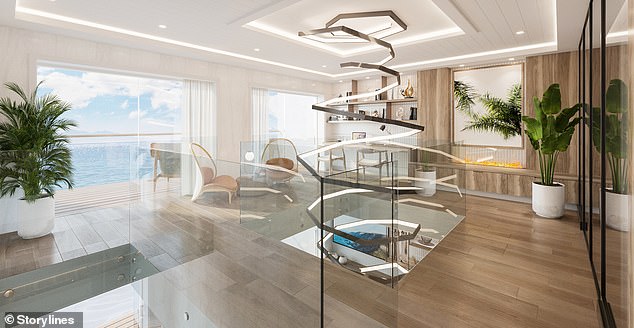 The most expensive apartment is an $8 million two-floor property with four bedrooms, retailing for $8 million

The 741-foot cruise ship will dock at ports for around three to five days – longer than average for liners.

‘Most people will be out in the local cities and doing day trips and overnight trips, hiring a car and going out for three or four days and meeting the ship at its next destination,’ explained CEO Alister Punton, a former construction and property executive who had never been on a cruise before founding the company.

He plans to move onto the ship – as do all the executives – with his wife and children.

Punton said a sample itinerary might include three days docked in Rome, then three days in Naples, followed by stops at smaller places such as the seaside towns of Sapri and Marsala, and eventually reaching Venice before sailing on to Slovenia, Albania, Croatia, Greece and then Turkey.

The ship will also go to the Arctic Circle during its three-year trip around the world.

Wells said he was excited to begin the journey.

‘This is probably the first time ever that there is even the ability to have a standard job and even consider working and living from a floating apartment complex,’ he said.