A metal detectorist unearthed a policeman’s helmet badge which likely fell off during a struggle with a notorious murderer who beheaded a man nearly 125 years ago.

Bob Bell, 72, found the rusty shield in an Essex field and decided to investigate, learning it was the exact spot where PC Charles Cook had apprehended a deranged killer called Samuel Collis in 1896.

His investigations revealed how PC Cook had given chase after Collis walked through the streets of Halstead with the severed head of bailiff Robert Cockerill in a bowl.

Collis went on a murderous rampage after discovering he had been cut out of his father’s will and the family farm had gone to his brother-in-law. 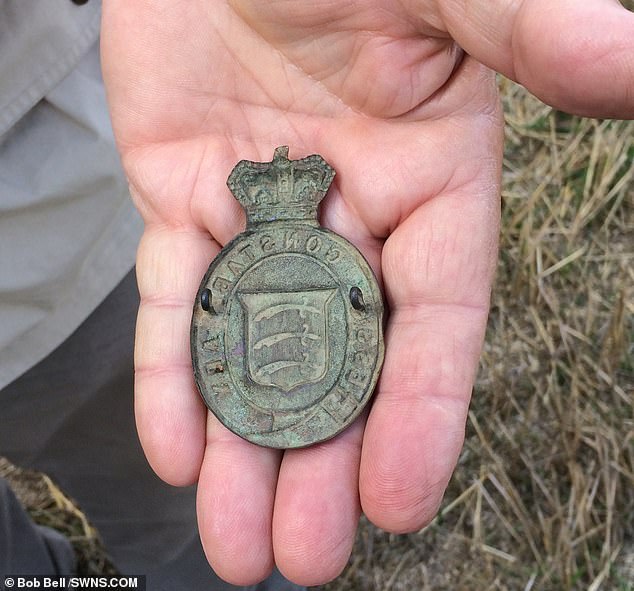 It is believed that PC Cook lost the badge from his helmet during the struggle with Collis, and it remained in the field for the next 123 years

He confronted Cockerill – who had been appointed to run the estate by the family – and shot him before chopping his head off.

It is believed that PC Cook lost the badge from his helmet during the struggle with Collis, and it remained in the field for the next 123 years.

Mr Bell, who by coincidence also worked for Essex Police, explained how the mystery unravelled after he was given permission to explore a farm near Pebmarsh in Essex.

He said: ‘We had checked out the same two-acre field previously but without great success.

‘However this time we split up and started searching at opposite ends to each other, hoping to cover a wider area.

‘After a couple of hours I got an interesting signal which resulted in the unearthing of what I knew to be a police issue helmet badge.

Pictured: The Clacton Police Division 1907. Charles Cook is fifth from the left (circled)

‘Having retired from the Essex Police Force myself 17 years ago I was familiar with such things.

‘I wasn’t aware of the story – it was only when I shared it on Facebook and posed the question about whether it was a coincidence and a former colleague told me about the murder.’

After doing some research, Mr Bell learned all about the infamous tale of the murder in Halstead, when Collis beheaded Robert Cockerill.

Collis had been snubbed in his father’s will and control of the family farm went to his brother-in-law. 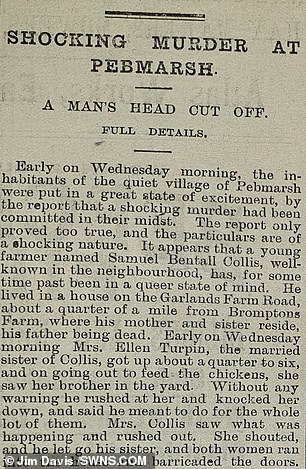 The brother-in-law appointed Robert as farm bailiff to run the estate in place of the family – much to Collis’ frustration.

Collis became unhinged and attacked Robert, shooting him and cutting his head off, and he then paraded down the street in Halstead, Essex, with the head in bowl.

He was stopped by PC Cook, who asked Collis what he was carrying.

Collis lied and told him a sheep’s head, but PC Cook instantly recognised the item as a human head and the deranged man fled.

PC Cook chased him into a nearby field but Collis turned and pulled out a gun, pointing at the chasing officer.

Recounting the story, Mr Bell said: ‘The policeman drew his truncheon and told Collis to put the gun down or he would split his head open.

‘Collis did so and there was a long struggle with Collis eventually being overpowered with assistance from farm workers and taken to Halstead police station.’

The badge remained in the field until Mr Bell came along and found it with his metal detector, a Rutus Alter 71, on September 10 this year.

Mr Bell found the badge six inches below the field, which is regularly ploughed, and to his surprise it was completely undamaged.

He continued: ‘I later put a photo on a social media page for retired Essex officers, as well as conducting my own research into the age of the badge.

‘Essex Constabulary, as it was called back then, only issued helmet badges in 1875, so my find was definitely Victorian.

‘It’s unusual to find something so close to where something like that has happened.

‘I was surprised, especially with it being in such good condition, being so old.

‘I guess we’ll never know for sure if it’s connected to the story – but it’s the right age and in the right place – I’d say the chances are very high. 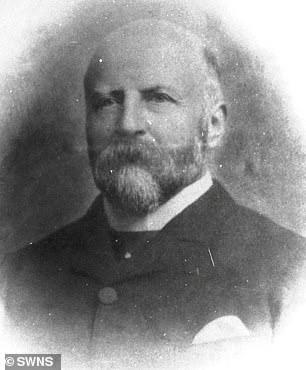 Charles Portway, who presided over the the Collis case

‘I think I’ll donate it to the Essex Police Museum.’

As for Collis, he was found to be insane at trial and was committed to Broadmoor lunatic asylum.

PC Cook was given a Certificate of Merit in recognition of his bravery, but he later developed insomnia, which Mr Bell suspects is most likely PTSD.

He continued: ‘The guy was obviously deranged and had problems with his head.

‘The poor farm bailiff got the blunt end of the resentment by being shot and having his head cut off.

‘The bravery of the police officer if incredible, he was clearly quite a hard lad.

‘His recognition and promotion is well deserved, it’s not nice to be on the wrong end of a barrel.’

Mr Bell has been metal detecting for three and a half years, and said he isn’t interested in finding gold or other valuable items.

He concluded: ‘It’s the most interesting thing I’ve found, I’ve never dug up anything valuable.

‘I found an 800-year-old paper seal in Essex – they are quite rare.

‘We do find interesting stuff, I like the history of it more than anything else.’