The Metropolitan Police have been accused of trying to ‘pass the buck’ over claims that firearms officers failed to properly patrol the Palace of Westminster at the time of a terrorist attack.

Khalid Masood mowed down pedestrians on Westminster Bridge before stabbing PC Keith Palmer to death as he stood guard at the Palace of Westminster on March 22 last year.

On Monday Dominic Adamson, representing the officer’s widow, told the inquest into his death that his murder was ‘entirely predictable’.

The inquest has already heard that PC Lee Ashby and PC Nicholas Sanders, the armed officers on patrol at the time of the attack, had not been near Carriage Gates, where Mr Palmer was stationed, for nearly an hour before Masood struck.

This was despite official guidelines that said they should be ‘in close proximity’ to the gates when they were open.

A review found that PC Ashby last accessed the online system where they were supposed to find their instructions in June 2015 and PC Sanders had never logged on.

Cross-examining Commander Adrian Usher, who leads policing at the Palace of Westminster, Mr Adamson said: ‘The whole focus of the Metropolitan Police’s attitude to this inquest has been to pass the buck and to assert that the responsibility for the non-compliance with the post instructions rests with PC Ashby and Sanders. Do you accept that?’

Mr Usher replied: ‘Absolutely not, sir. I’m sure you are aware of how offensive that is. I have no reason, nor has the Metropolitan Police, to take that course of action. For me there is no benefit in doing that.

‘There is nothing that you could say that I would do to obstruct or not assist with this court’s search for the truth of what happened and why it happened.’ 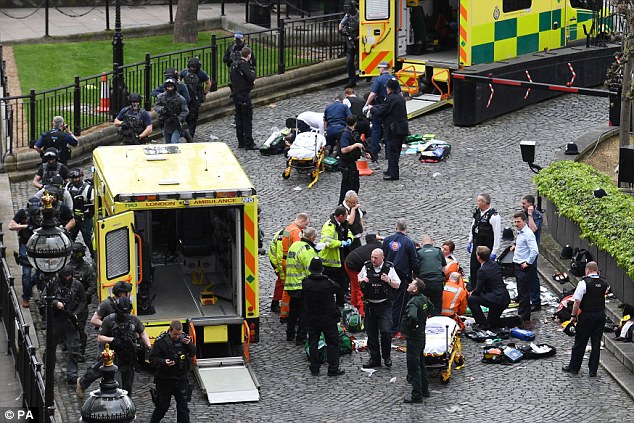 Paramedics desperately try to help PC Keith Palmer, as he bleeds to death outside the Houses of Parliament (bottom right) 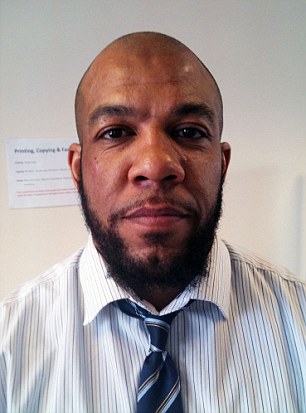 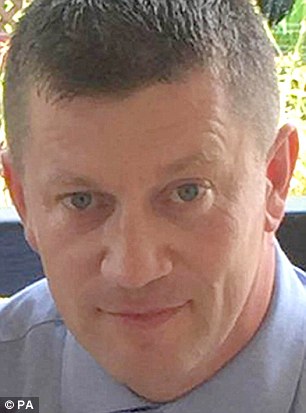 Khalid Masood (pictured left) murdered five people (including PC Palmer, right) and injured 50 others when he drove his car into pedestrians outside the Houses of Parliament in March 2017

Mr Adamson went on: ‘The Metropolitan Police has failed to identify the fact that its armed officers were not doing what they were supposed to do.

‘And to this day it has failed to properly acknowledge the failings that it was responsible for in allowing that state of affairs to persist.’

Mr Usher answered: ‘I have said that I do not believe that to be the state of affairs.’

PC Ashby previously told the inquest that Mr Usher had not corrected his knowledge of the post notes, an accusation he called ‘absolutely incorrect’.

The terrorist threat level to police officers was raised to severe in 2015 and unarmed staff not involved in vehicle duties were allowed to stop wearing high-visibility jackets to make themselves less noticeable to attackers, the Old Bailey heard.

Mr Adamson asked: ‘That which was entirely predictable occurred and the Metropolitan Police failed to have in place proper arrangements to protect Keith at those gates, did they not?’ 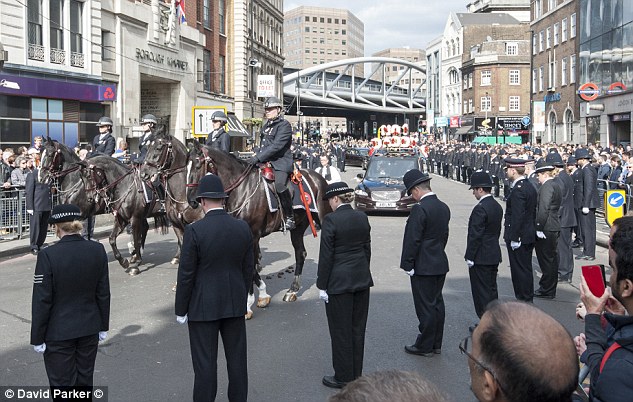 The officer replied: ‘No sir, I do not agree with you.’

He said that even if the marksmen had been at the gate at the time of the attack, they would have been most likely to head towards where Masood had crashed his car into the perimeter wall, believing it to be an explosion.

Mr Usher admitted he did not know how many armed officers had misinterpreted the patrol instructions, but said 83% had at least accessed the computer system where they were stored.