It has been just a week since she revealed she is suffering from a rare and ‘life-limiting’ lung disease.

But Crown Princess Mette-Marit of Norway looked in high spirits as she attended an awards ceremony with her husband Prince Haakon, also 45, on Tuesday evening.

The 45-year-old royal was resplendent in a floor-sweeping floral gown as the couple walked the red carpet at an event celebrating The Nordic Council Literature Prize 2018 in Oslo.

The mother-of-three is thought to be in the early stages of the disease in which scar tissue forms in the lungs. 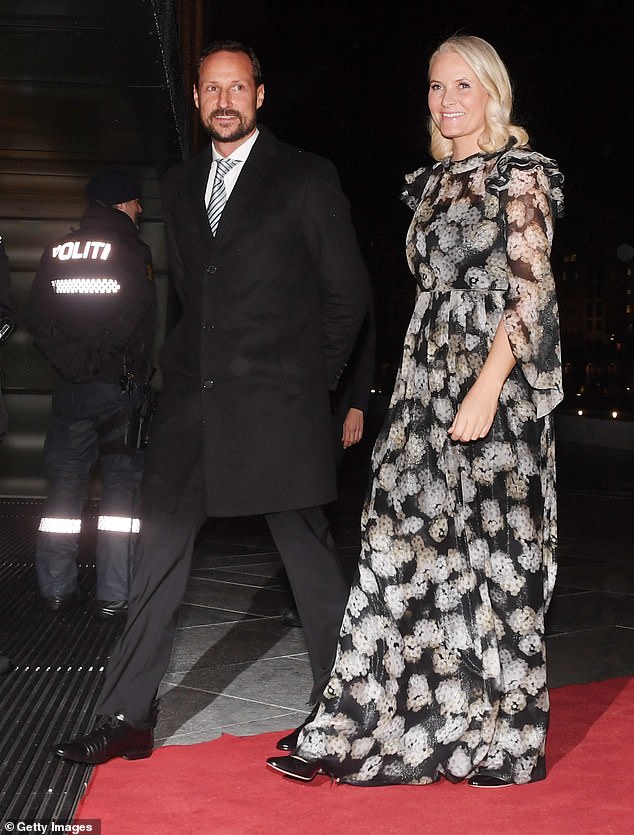 Mette-Marit (right) donned a floor-sweeping floral gown for the glamorous event as she arrived with her husband Crown Prince Haakon (right), who looked dapper in a black suit

Tonight she smiled for the cameras as she arrived with her husband of 17 years, who cut a dapper figure in a black suit.

Mette-Marit’s dress had an all over white daisy pattern and featured a frilled neckline and sheer sleeves.

She wore her blonde locks curled around her shoulders and behind her ears, allowing her to flaunt a pair of dazzling diamond earrings.

Mette-Marit carried a simple black clutch bag and sported a pair of black stilettos that complimented the colour of her monochrome dress. 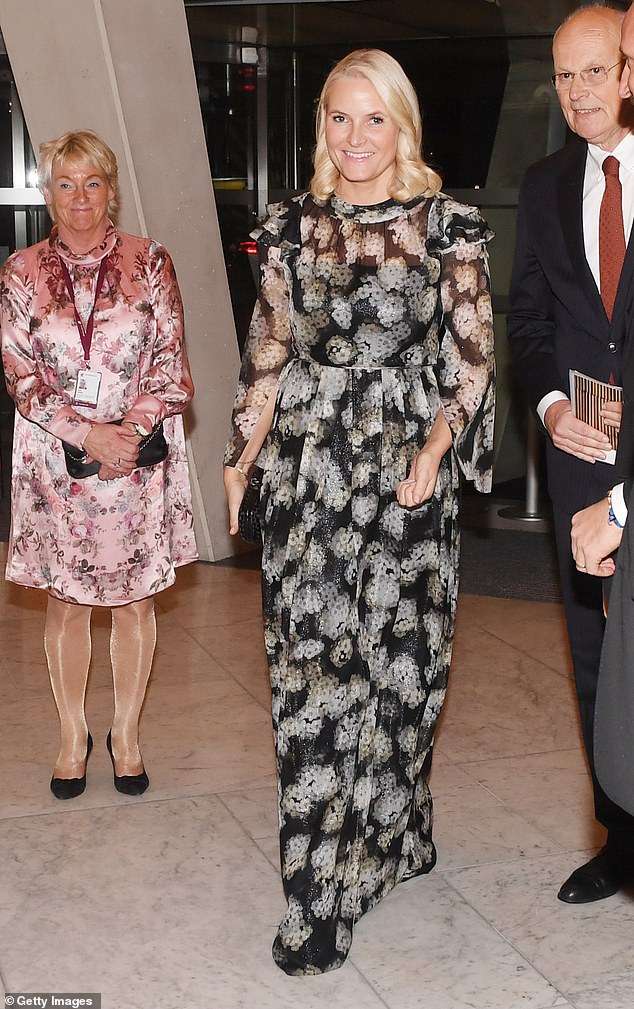 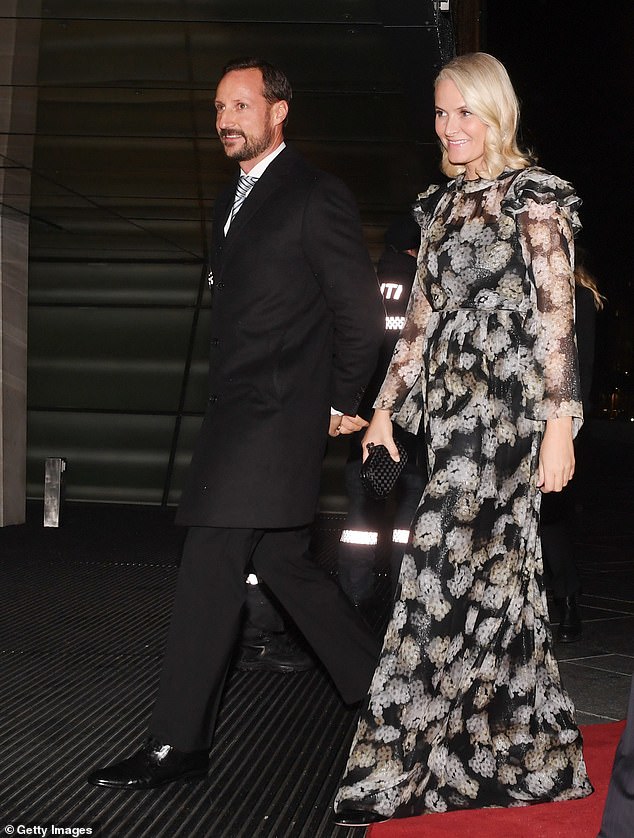 She carried a simple black clutch bag and donned a pair of black stilettos that complimented her monochrome dress perfectly. Pictured: The couple arriving at the event in Oslo

WHAT IS IDIOPATHIC PULMONARY FIBROSIS?

Idiopathic pulmonary fibrosis (IPF) is a condition in which the lungs become scarred and breathing becomes increasingly difficult.

It’s not clear what causes it, but it usually affects people around 70-75 years of age and is rare in people under 50.

Several treatments can help reduce the rate at which IPF gets worse, but there’s currently no treatment that can stop or reverse the scarring of the lungs.

The symptoms of IPF tend to develop gradually and get slowly worse over time.

There is no cure and it’s very difficult to predict how long someone with IPF will survive at the time of diagnosis.

Regular monitoring over time can indicate whether it’s getting worse quickly or slowly.

Tonight they attended a celebration in The Nordic Council Literature Prize, which is awarded to novels written in one of the languages spoken in Norway – Norwegian, Danish or Swedish –  and is worth 350,000 Danish Kroner (£41,874).

The prize will be awarded this Thursday, November 1.

Despite her diagnosis, Mette-Marit was still in high spirits at the glamorous event.

A statement from the Royal Court released last week revealed the royal’s diagnosis.

It said: ‘The Crown Princess has undergone extensive investigations related to her health and an unusual variant of fibrosis has been detected in the lungs, according to the Crown Princess’s doctor, Professor Kristian Bjøro at the National Hospital.’

‘It is not yet clear whether the pulmonary disease is linked to a more extensive autoimmune disease process or if there are other causes that underlie the lung changes.’

The princess is thought to be in the early stages of the disease in which scar tissue forms in the lungs. The disease can cause serious breathing problems and there is no known cure.

She later released her own statement following the diagnosis where she spoke of her determination to carry on as normal.

She said: ‘Although such a diagnosis in times will limit my life, I’m glad that the disease has been discovered so early. 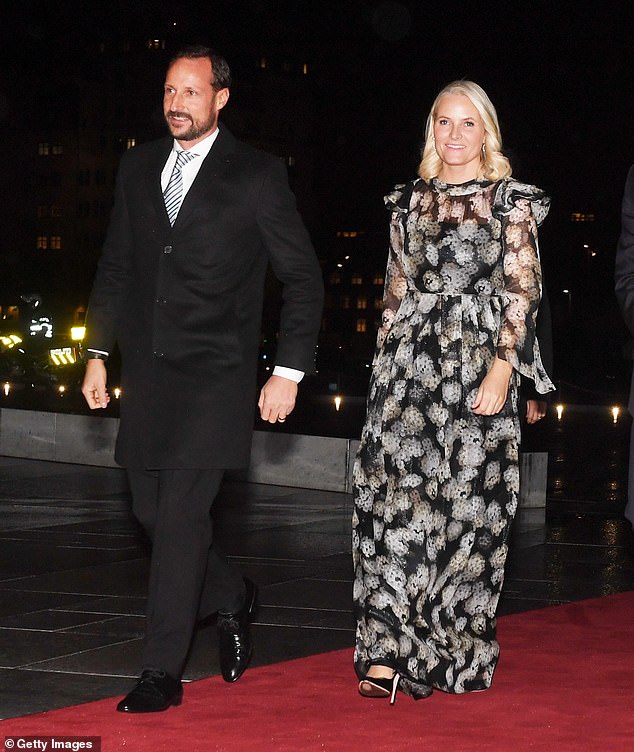 The mother-of-three is thought to be in the early stages of the disease in which scar tissue forms in the lungs. Pictured: The couple are all smiles as they arrive at tonight’s event 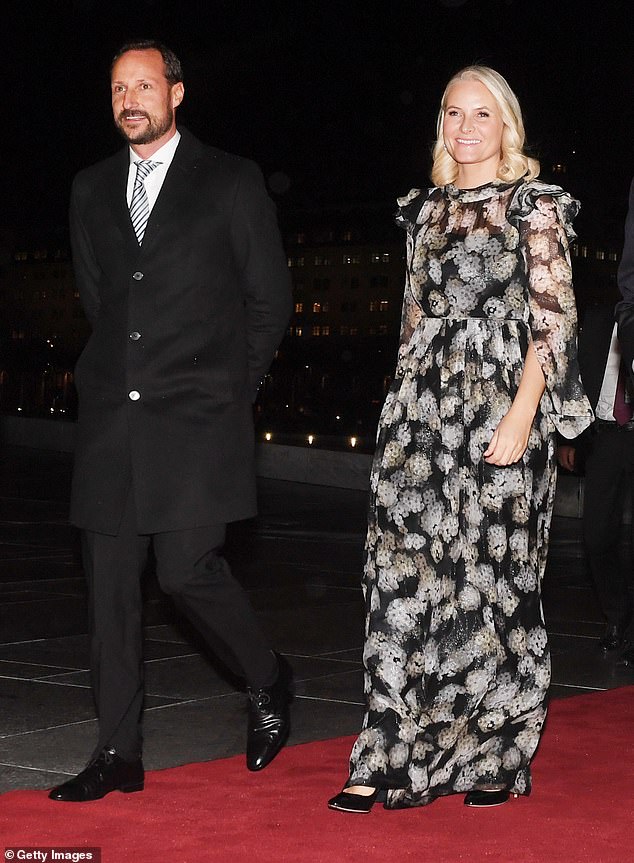 After the news broke she released a statement of her own where she spoke of her determination to carry on as normal. Pictured: The couple smile for cameras on the red carpet in Oslo 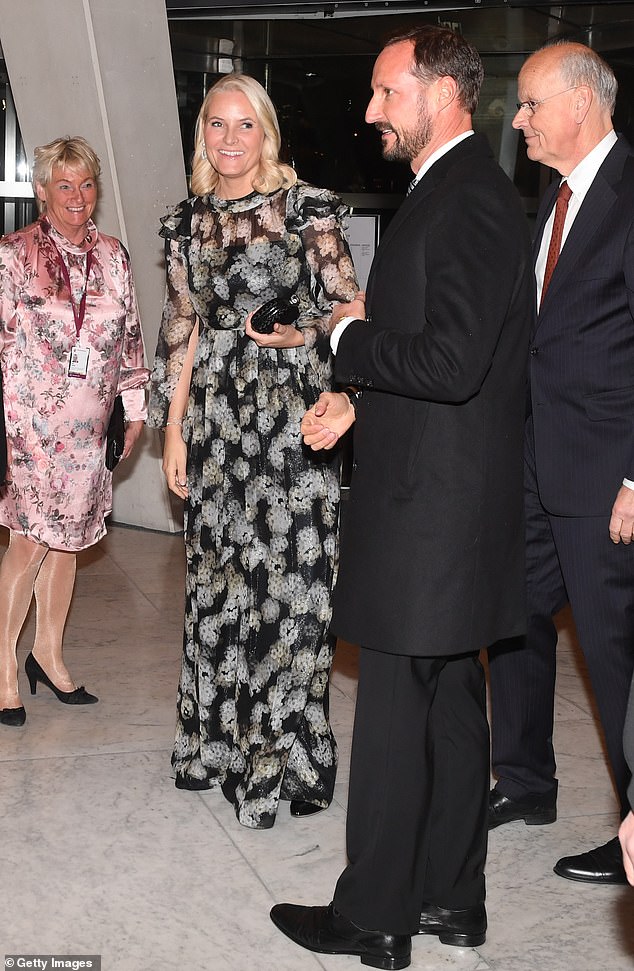 The Nordic Council Literature Prize is awarded to novels written in one of the languages spoken in Norway – Norwegian, Danish or Swedish – and is worth 350,000 Danish Kroner (£41,874). Pictured: The couple mingle with guests at the event

‘My goal is still to work and participate in the official programme as much as possible.’

According to the NHS it is ‘very difficult’ to predict how long someone with the condition will survive. Regular monitoring over time can indicate whether it’s getting worse quickly or slowly.

Before treatments like pirfenidone and nintedanib about half of people with IPF lived at least three years from their diagnosis. Around 1 in 5 survived for more than five years.

Mette-Marit is a particularly rare case as the disease normally occurs in people of the age 70-75 and is very rare for anyone under 50 to suffer from it.