Mexican citizen executed in Texas for killings of wife, kids

A Mexican citizen on death row in Texas was executed Wednesday night for the sledgehammer killings of his wife and two children more than 26 years ago.

Roberto Moreno Ramos was condemned for the 1992 deaths of his 42-year-old wife Leticia, 7-year-old daughter Abigail, and 3-year-old son Jonathan at their home in Progreso, located along the Mexico border.

When asked by the warden if he had a final statement, Ramos thanked the Mexican consulate for assisting with appeals in his case and said he was grateful for ‘the humane treatment I got in prison in Texas.’

‘I’m getting my gold watch that it took the governor 30 years to forge,’ he said without elaborating. ‘Thank you God. Lord, send me a chariot. I’m ready.’

As the lethal dose of the powerful sedative pentobarbital began taking effect, the 64-year-old Ramos took a couple of deep breaths, sputtered once and began snoring. Within seconds, all movement stopped.

He became the 21st inmate put to death this year in the U.S. and the 11th given a lethal injection in Texas, the nation’s busiest capital punishment state. No friends or relatives of Ramos or his victims witnessed the execution.

Mexican officials had called for his execution to be stopped, arguing he was part of a group of Mexican citizens condemned in the U.S. who were never told when first arrested that they could get legal help from the Mexican government.

The U.S. Supreme Court on Wednesday night cleared the way for the punishment when it denied two appeals seeking to halt the lethal injection.

Ramos’ attorney on Wednesday asked the Supreme Court to stop his execution, arguing that Ramos’ constitutional rights were violated as lower courts refused to fully review his claims that his trial lawyers failed to present any evidence about his mental illness and abusive childhood that could have persuaded jurors to spare his life.

Three retired justices who had served on the Texas Court of Criminal Appeals filed court documents with the Supreme Court on Wednesday in support of stopping the execution.

The ex-judges alleged the appeals court appointed an incompetent appellate attorney who early in the post-conviction process failed to investigate Ramos’ case.

The request had been part of a lawsuit Ramos filed against the Texas Court of Criminal Appeals a day earlier. The suit alleged the appeals court had not allowed Ramos to present claims he had ineffective trial and appellate lawyers.

The 5th U.S. Circuit Court of Appeals and the Texas Court of Criminal Appeals had previously turned down requests to halt Ramos’ execution.

The Texas Board of Pardons and Paroles on Monday declined to recommend either a commutation of his sentence or a six-month reprieve.

In court documents, Ramos’ appellate attorney, Danalynn Recer, had argued Ramos suffered from bipolar disorder most of his life, including during the time of his family’s killings, as well as brain damage that affected his ability to control his impulses and regulate his emotions. 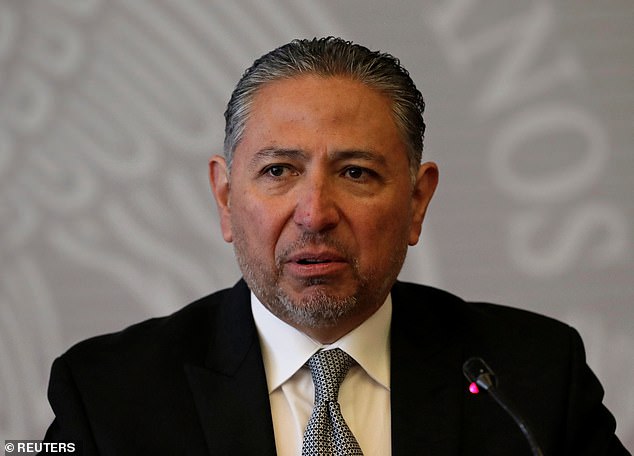 Ambassador Jacob Prado Gonzalez, Director General for the Protection of Mexicans Abroad, speaks during a news conference about the case of Moreno

Recer said Ramos was also brutally beaten as a child by his father.

Ramos was born in Aguascalientes, Mexico, and grew up in Guadalajara and Tijuana before his family moved to the United States in 1970.

‘No fact-finder or decision-maker entrusted with Mr. Moreno Ramos’ life has ever been provided with evidence of (his) ‘diverse human frailties’ to assist them in dispensing the most severe punishment under law,’ Recer said.

But the Texas Attorney General’s Office said Ramos’ death sentence was appropriate due to his ‘violent and dangerous nature.’

Authorities said Ramos bludgeoned his family members and then buried them underneath his home’s bathroom floor so he could marry the woman he was having an extramarital affair with at the time.

In court filings, the attorney general’s office highlighted testimony from Ramos’ then-19-year-old son, who told jurors at Ramos’ 1993 trial that his father ‘would continue to commit criminal acts of violence.’

In 2004, the International Court of Justice in The Hague, Netherlands, found Ramos was part of a group of 52 Mexican citizens awaiting execution in the U.S. who weren’t advised of their consular rights under the Vienna Convention when first arrested. It recommended they be tried again to determine if consular access would have affected their cases. Then-President George W. Bush directed states to reopen the cases.

But the Supreme Court in 2008 overruled Bush’s directive, saying only Congress can require states to follow the international court’s ruling.

Including Ramos, six Mexican citizens have been executed since being named in the international court ruling and all the executions were carried out by Texas, according to the Mexican government.