A delivery driver stabbed a man in the eye with a knife during a parking row – and shocking video shows the victim with the blade still in his eyeball as they continue to argue.

Domingo Munoz is seen dabbing his bleeding face with a cloth while he speaks to a man in a white T-shirt, named in reports as his alleged attacker Armando Barragan, outside a shopping centre in eastern Mexico, where the incident took place.

Munoz gesticulates as he confronts the other man, who remains calm, while a police car is parked nearby and onlookers watch in astonishment at the mall in the Floresta colony, in Puerto de Veracruz.

Domingo Munoz, 47, stands next to a vehicle after being stabbed in the eye during a row over a parking space at a shopping centre in eastern Mexico 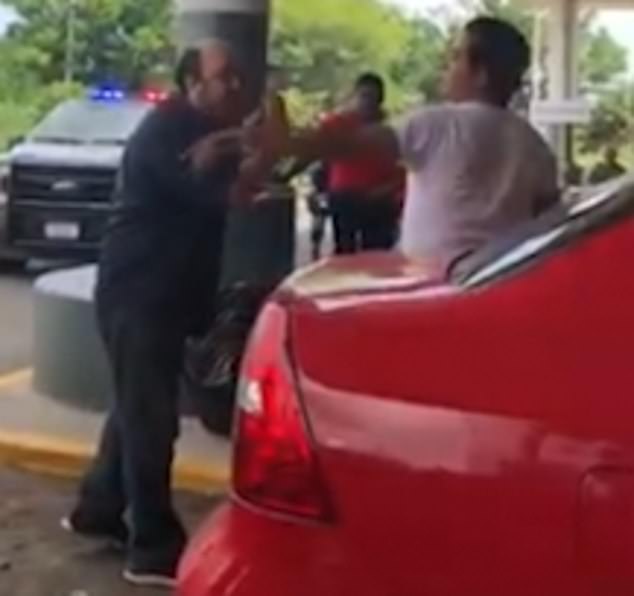 Munoz confronts his attacker, named in reports as Armando Barragan (in white T-shirt), also 47, at the scene of the incident – a mall in the Floresta colony, in Puerto de Veracruz 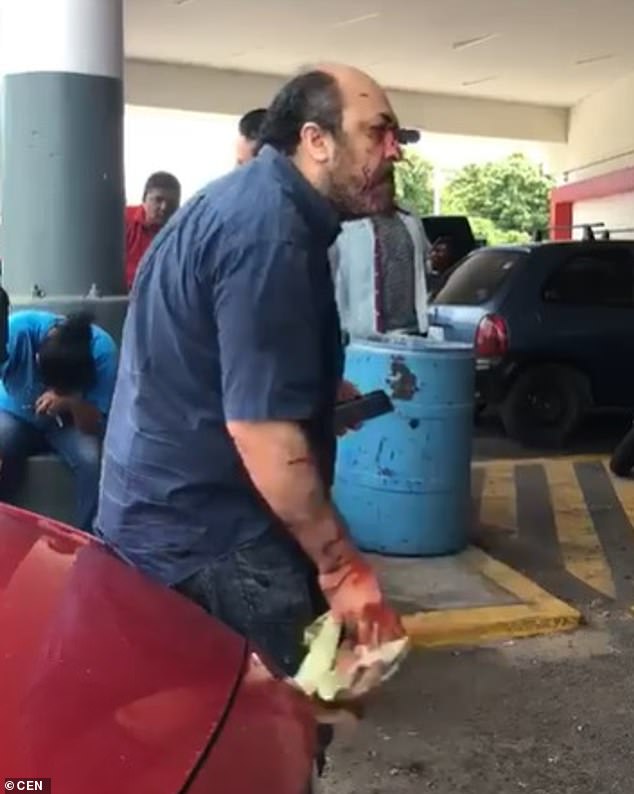 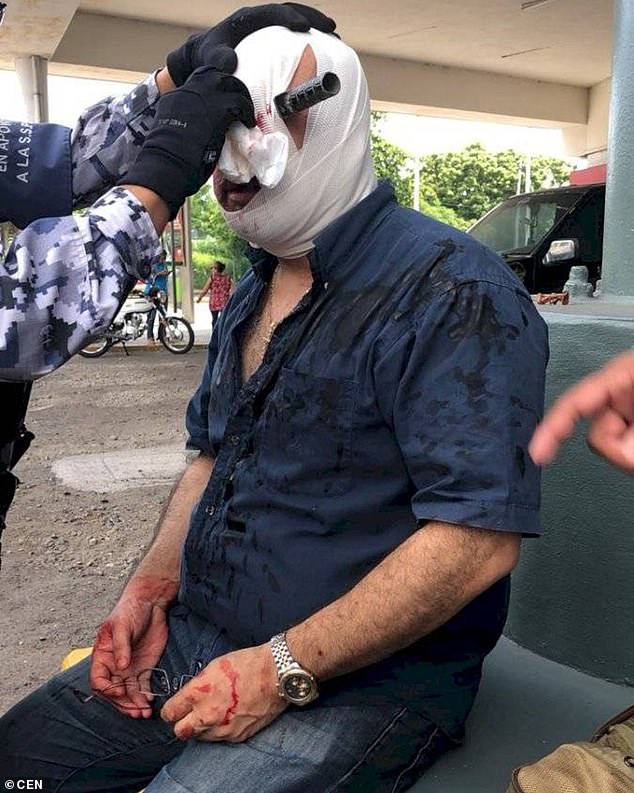 Munoz is treated for his injuries at the scene after Barragan, a bakery delivery driver, stabbed him in front of other shoppers

Barragan, 47, who is a delivery driver for Bimbo – the world’s largest bakery – claimed Munoz, also 47, had begun attacking him when he lost the parking space.

He added that he then pulled out a knife and stabbed Munoz in the eye, in full view of other shoppers.

Barragan was arrested while Munoz was taken to Veracruz General Hospital where doctors removed the knife which had pierced the left eyeball and the lower part of the right eye. 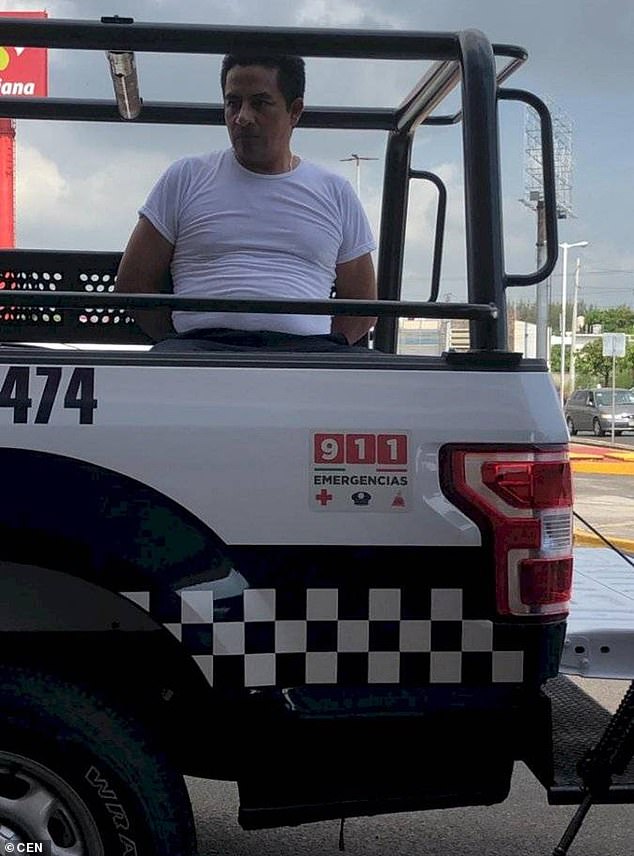 Barragan (above) is arrested. It is unclear whether the suspect – who works for Bimbo, the world’s largest bakery – has been charged 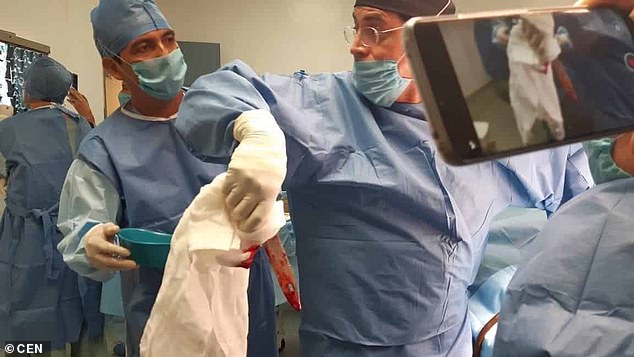 A scan taken at the hospital shows how the knife passed through the left eyeball and through into the lower half of the right eye.

Local media report that Munoz lost his left eye in the incident but he is in a stable condition.

It is unclear if the suspect has been charged. 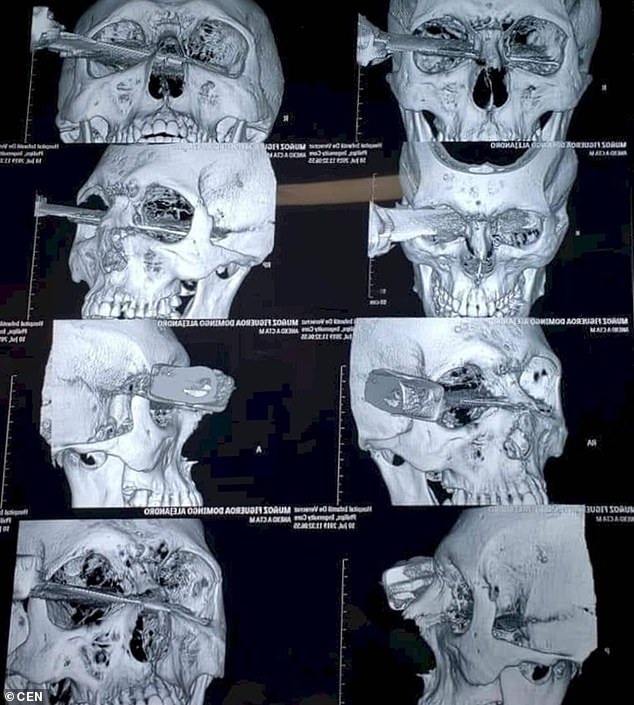 The knife had passed through the left eyeball and through into the lower half of the right eye, as this hospital scan shows