By the hour mark Mexico fans were shouting ‘Ole!’ as Chile passed the ball around with a swagger.

A swagger earned completely as they turned in the best performance of the tournament so far, humiliating El Tri in a stadium packed with close to 70,000 Mexican supporters who turned on their own team.

They started streaming out in their droves as the score hit five and then six nil, with a significant contingent of the remaining fans embarrassing their country further by yelling their controversial ‘Puto!’ cry at their goalkeeper Guillermo Ochoa. 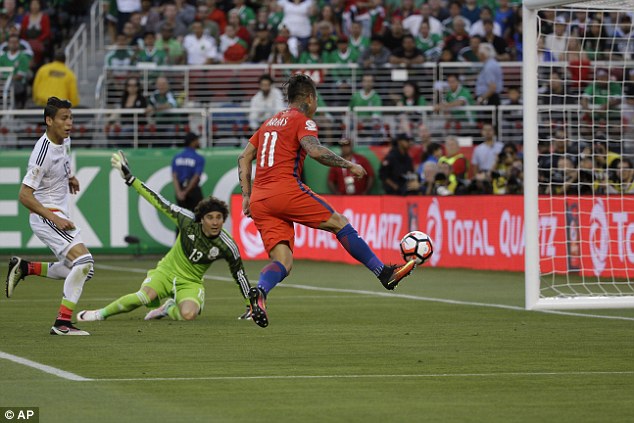 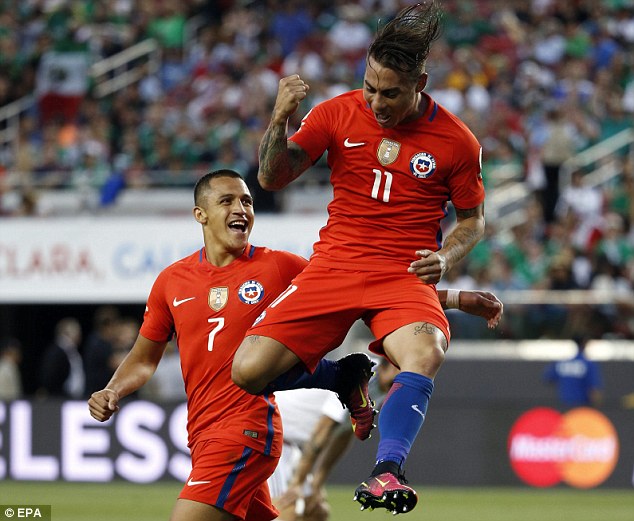 Puto, which means ‘fag’, is yelled by Mexican fans at opposition goalkeepers and has been a stain on this tournament, especially notable after the Orlando gay nightclub attack.

Mexico played atrociously, Chile sensationally. Neither of those things should be overlooked.

Juan Carlos Osorio tasted defeat for the first time since he took over as Mexico manager, and it was the country’s first loss in 22 games, as Chile racked up their joint biggest ever Copa America victory, equalling their 1979 demolition of Venezuela.

Osorio spoke afterwards in a sombre press conference. ‘I want to ask for forgiveness from the Mexican people,’ he said.

‘It was an embarrassment. It was a very poor performance from us and I repeat, many apologies to the Mexican people.’

Mexico came into the Copa America as dark horses to win it, and justified that billing with their group stage performance, finishing first with two wins and a draw. 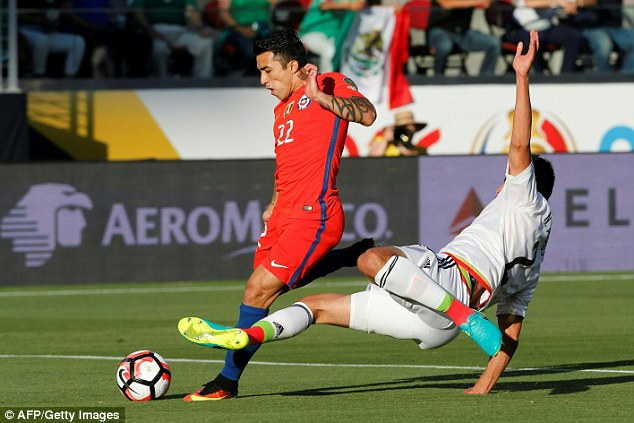 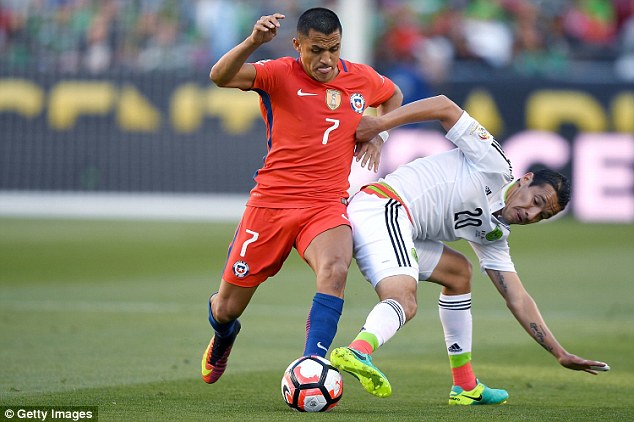 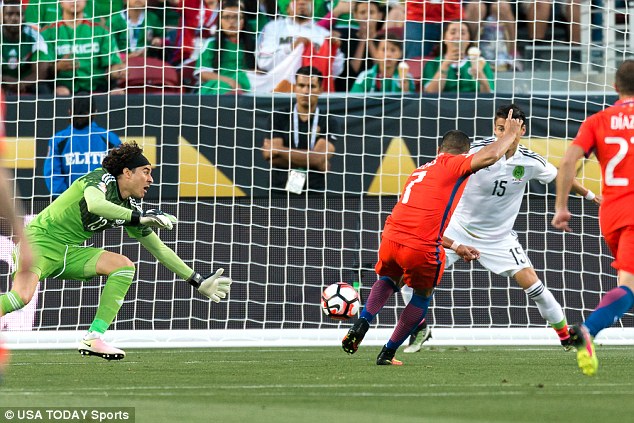 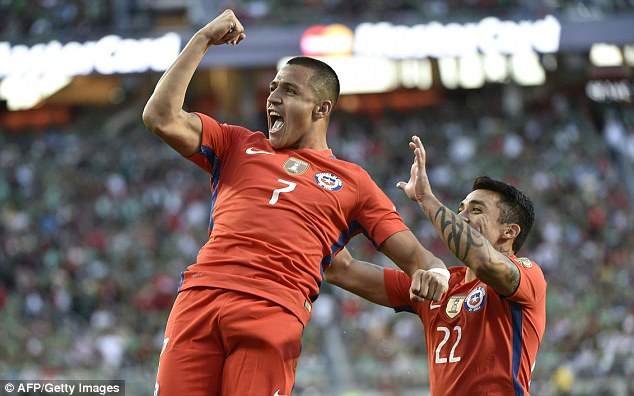 USA vs Argentina – Wednesday, 2am

Colombia vs Chile – Thursday, 1am

Chile, by contrast, were beaten by Argentina, scraped past Bolivia and finally found their stride in an attacking sense against Panama, although the defence was still faulty.

However, in the San Francisco Bay on Saturday night, everything clicked for La Roja and fell to pieces for their opponents.

Juan Antonio Pizzi has struggled to harness his team’s power in the first few months of his reign, but did just that in a mauling of Mexico which never looked in doubt.

Eduardo Vargas led the way with four goals, as many as he bagged in 22 appearances for Queens Park Rangers, and along with the two he netted against Panama, now has six in two games.

He was aided by top class performances from Arsenal star Alexis Sanchez and Bayern Munich’s Arturo Vidal, two players who have improved with each passing game in this year’s Copa. 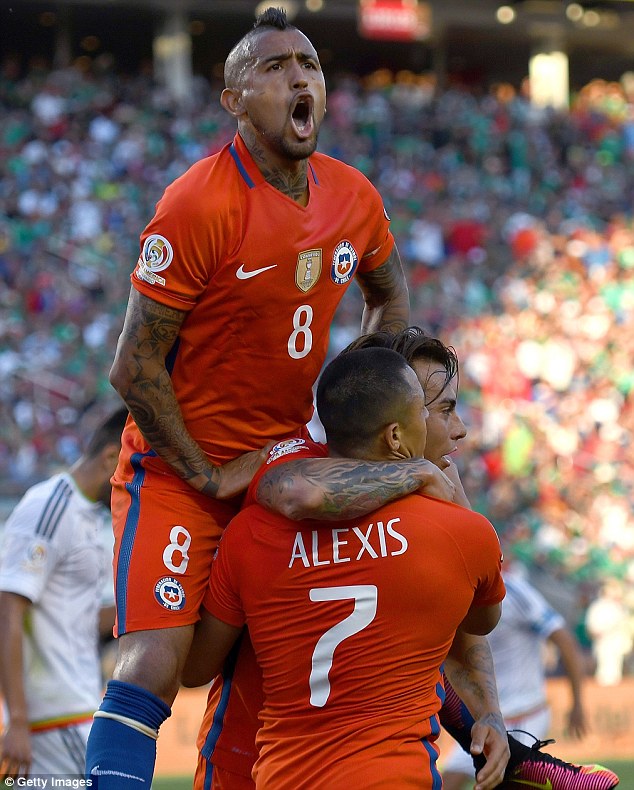 The latter is suspended for the semi-final after being booked in this match, and he will be a huge miss for Pizzi’s team.

Chile, champions last in 2015, didn’t seem like they would be in with a strong shot of victory again as they adjusted to the new manager. Now they are second favouites, behind Argentina.

It took little over a quarter of an hour for them to take the lead, when Diaz’s strike was parried by Ochoa into the path of Edson Puch, who gleefully slotted home.

Chile kept up their intensity in attack and were rewarded on the stroke of half-time, with Vargas prodding home from close range. Vidal fed Sanchez for the third, while Vargas darted clear of the defence and finished under Ochoa to make it four. 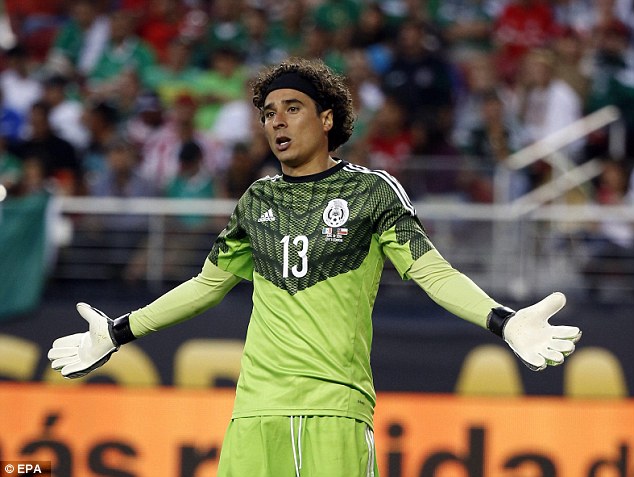 He completed his hat-trick after Jean Beausejour, another player who suffered in England but is thriving for his country, demolished Mexico down the left and fed the striker, who scored from the six-yard box.

Vargas still had more in the bag, following up after a scramble in the Mexico box to rifle home, before Puch put the cherry on the cake at the death by lifting the ball over Ochoa for No 7.

‘It hurt our soul,’ said Javier Hernandez, who didn’t get a sniff of goal all night long. He backed the coach to stay, despite some calls for him to be sacked.

‘We have to support him like we did when we were winning,’ explained Chicharito. ‘Today we lost, but we want Osorio to stay, he has won our trust. Today was a bad afternoon though.’

The referee did not bother adding any stoppage time after the game hit 90 minutes. Nobody cared. His whistle was an early end to Mexico’s night from hell and the signal for Chile to start thinking about their semi-final clash with Colombia in Chicago next week. 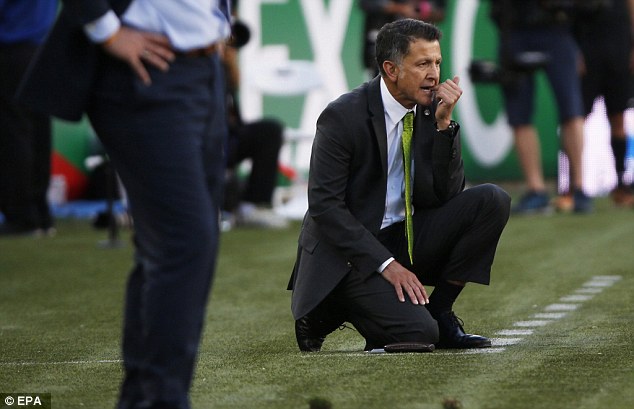