Mexico’s cartels are getting rich and powerful off of Biden’s mass migration crisis: TODD BENSMAN

Todd Bensman is Senior National Security Fellow for the Center for Immigration Studies and author of ‘Overrun: How Joe Biden Unleashed The Greatest Border Crisis In U.S. History’

For decades, illegal immigration amounted to a side hustle for Mexico’s ultra-violent cartel mafias that control all the southern border smuggling lanes into America.

President Joe Biden’s election and America’s subsequent mass migration crisis has bestowed such fabulous riches upon these criminal organizations that traditional drug trafficking is no longer the only prize worth dying for.

Nowadays, Mexican cartels are battling one another for control of an illegal immigrant smuggling boom. And the bonanza of illicit gains from it are being spent on growing and arming the ranks of the cartels’ paramilitary armies – creating a economic and national security threat to the United States.

Yet, no one is talking about it.

Reporting indicates that human smuggling became a multi-billion-dollar business in 2021 and in 2022 it may have even surpassed drug smuggling proceeds.

No one knows exactely how much cartels really make, but Immigration and Customs Enforcement (ICE) intelligence has taken stabs at it.

One ICE estimate found that prior to 2018 human smuggling generated somewhere in the neighborhood of $500 million a year. That revenue may have gone as high as $13 billion in 2021 alone. A lower ICE estimate pinned the revenues between $2 billion to $6 billion per year.

Many of the more than 4.4 million immigrants from around the world – the most by far in U.S. history – have paid thousands of dollars each to cross cartel territories during the Biden administration.

America has always held the cartels in check by compelling Mexico’s military and justice system to punish these criminal organizations when they crossed U.S. red lines.

Nearly four decades after the ghastly torture-murder of U.S. Drug Enforcement Administration agent Enrique ‘Kiki’ Camarena by a cartel in the 1980s, Mexican Marines tracked down and captured the infamous drug lord Rafael Caro Quintero, who America holds responsible for the killing.

But what happens when those cartels can outgun the Mexican government?

The answer is that America would lose its current imperfect, wanting reliance on Mexico to do it’s bidding. The day that happens is the day America will face serious security, public safety, and even wider-ranging economic impacts. And there’s plenty of evidence to suggest that day has already arrived.

According to recent Washington Post reporting, Mexico’s president has already substantially retreated from its decades-long symbiotic bi-national security partnership with the United States, withdrawing almost entirely from efforts to counter drug-trafficking and intelligence-sharing.

In large part, that’s because Mexico’s President Andrés Manuel Lopez-Obrador chose from the beginning of his term to leave the cartels alone on every front, even embracing a comical, yet official ‘hugs, not bullets’ policy toward them.

So no one is working to degrade the cartels as their strength grows.

It’s impossible to know how much military hardware the revenues from the Biden border crisis have paid for, but the cartels are clearly reinvesting their massive profits.

In March 2022, inside four houses controlled by a faction of the Sinaloa Cartel in the northern State of Sonora, the Mexican army recovered 2.8 million rounds of ammunition, 89 hand grenades, 20 machine guns, six .50 caliber sniper rifles, more than 150 handguns and automatic rifles, and bulletproof vests.

In May 2022, U.S. authorities broke up a Cartel del Noreste scheme to buy $500,000 worth of machine guns, grenades, and rocket-propelled launchers to be smuggled south from the U.S. into Mexico.

An August 2022 report showed that the state of Tamaulipas seized 257 shop-built armored ‘narco-tanks’ from the cartels in recent years, so-called ‘monsters’ made of semis, SUVs, or pickup trucks encased in thick steel with machine-gun ports. Video shows well-kitted masked cartel soldiers filling them.

These are armies, with highly trained special forces units, supported by professional intelligence operations and run by warlords.

Will the Mexican military be able or willing to bring these cartels under control? 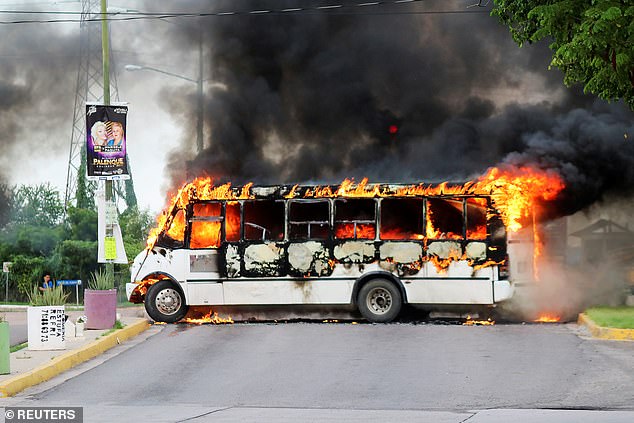 (Above) A burning bus, set alight by cartel gunmen to block a road, is pictured during clashes with federal forces following the detention of Ovidio Guzman, son of drug kingpin Joaquin ‘El Chapo’ Guzman in Culiacan, Sinaloa state, Mexico October 17, 2019 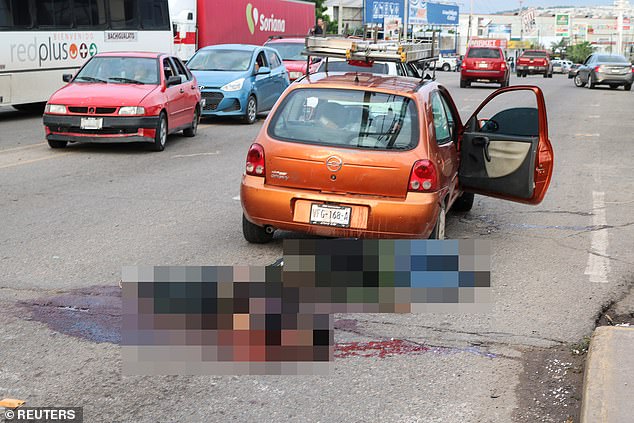 (Above) Dead bodies lie next to a car during clashes between Cartel gunmen and federal forces in Culiacan, Sinaloa state, Mexico on October 17, 2019

They outmaneuvered and outfought the Mexican forces during hours of gun battles and took families hostages. They threatened a bloodbath if Guzman’s son was not released. The Mexican government capitulated and released Guzman’s son in what was widely regarded as a humiliating military defeat at the hands of a mere paramilitary group.

When we see more such defeats — or perhaps worse, no effort to even try — we’ll know to worry.

I’m not alone in my estimation that Biden’s cartel-enriching mass migration crisis poses serious threats to important U.S. national interests, including many that are rarely discussed out loud, such as Mexican trade.

‘I think the impacts are massive,’ said former U.S. Ambassador to Mexico Christopher Landau. ‘The more power these groups have in Mexico, the less we can count on Mexico as a partner in combatting these groups and therefore the greater the challenge for us on everything dealing with Mexico: migration, counter-narcotics and even energy. Our economy is very bound up with Mexico’s.’

Dare anyone finally say this out loud, but: the more militarily powerful the cartels become compared to Mexico’s military, the more likely they will feel free to press a thumb down on the 212 million barrels of Mexican heavy crude oil the U.S. imported in 2021. 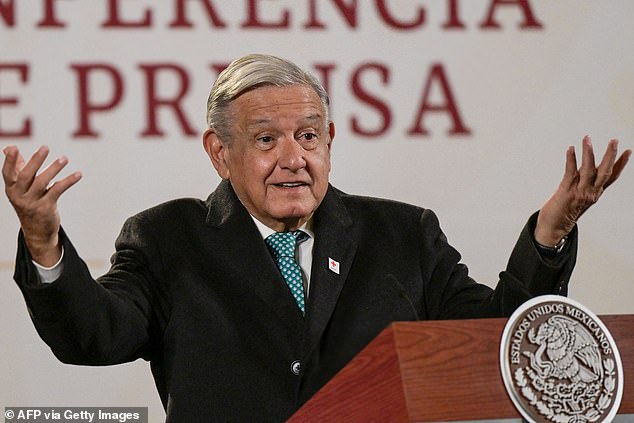 Mexico’s President Andrés Manuel Lopez-Obrador (above) chose from the beginning of his term to leave the cartels alone on every front, even embracing a comical, yet official ‘hugs, not bullets’ policy toward them.

Perhaps, for any number of petty reasons of their own — anyone want a prisoner exchange, say a beloved drug-trafficking relative in a U.S. prison? — vengeful paramilitary overlords might want to meddle in Mexico’s huge auto part export business upon which American car makers heavily depend.

Cartel puppet masters less worried about American-ordered retaliations against them inside Mexico might feel emboldened to make thousands of American companies feel less secure operating in the country.

Or they might do the same to the hundreds of thousands of American expatriates who make their homes and lives in Mexico. More Americans are concentrated in Mexico than anywhere else outside the U.S., an estimated 1.6 million.

In the meantime, anyone who believes all that shooting is just Mexico’s problem and that America’s mass migration crisis is really no big deal, the time has come to think again.