The city was once a tropical playground for Hollywood stars, where the Kennedys honeymooned and John Wayne basked in breezes on the clifftops.

But for each of the past five years, Acapulco has been the murder capital of Mexico. It is the fourth-deadliest city in the world.

Just 10 minutes from the Pacific beaches and towering palms, bloodshed is rampant.

Photographs show events such as coroners removing a body that was decapitated and dismembered and a community wake for two teenage brothers who were tortured and killed.

Coroners remove a body from the impoverished neighborhood Barranca de la Laja. The body, which had been decapitated and the legs dismembered, was buried in the floor of a residence of the chronically violent neighborhood. Police and military rarely venture into the city’s ‘colonies,’ unless it is to remove bodies 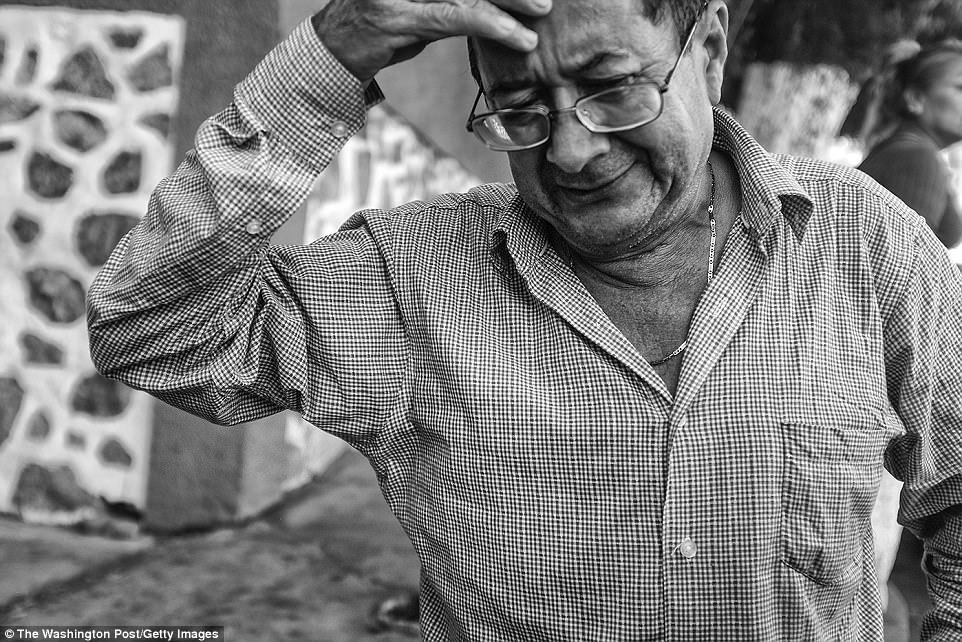 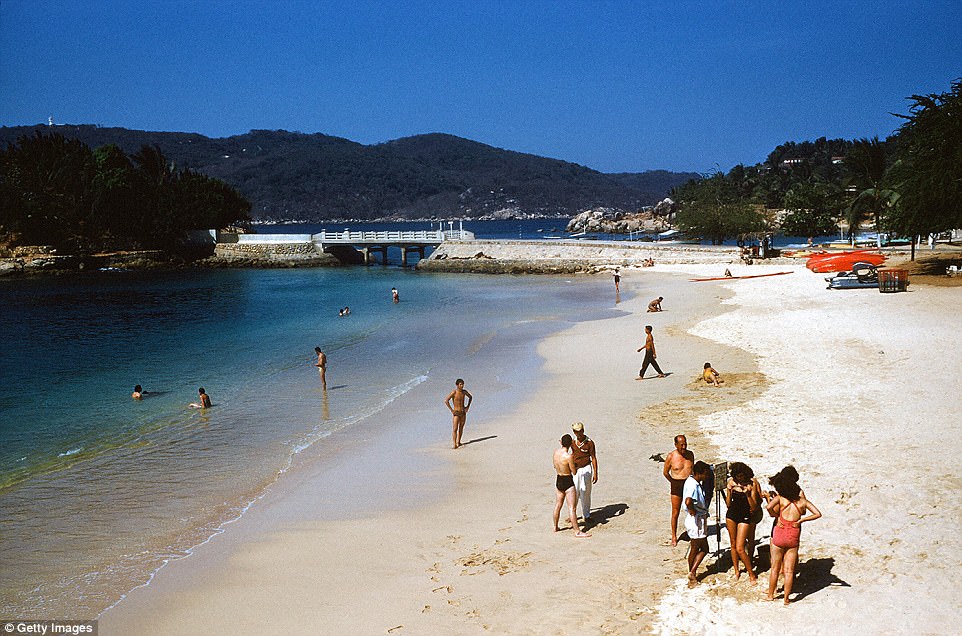 Acapulco was a popular getaway for the rich and famous during the 20th century. It is pictured above in May 1954 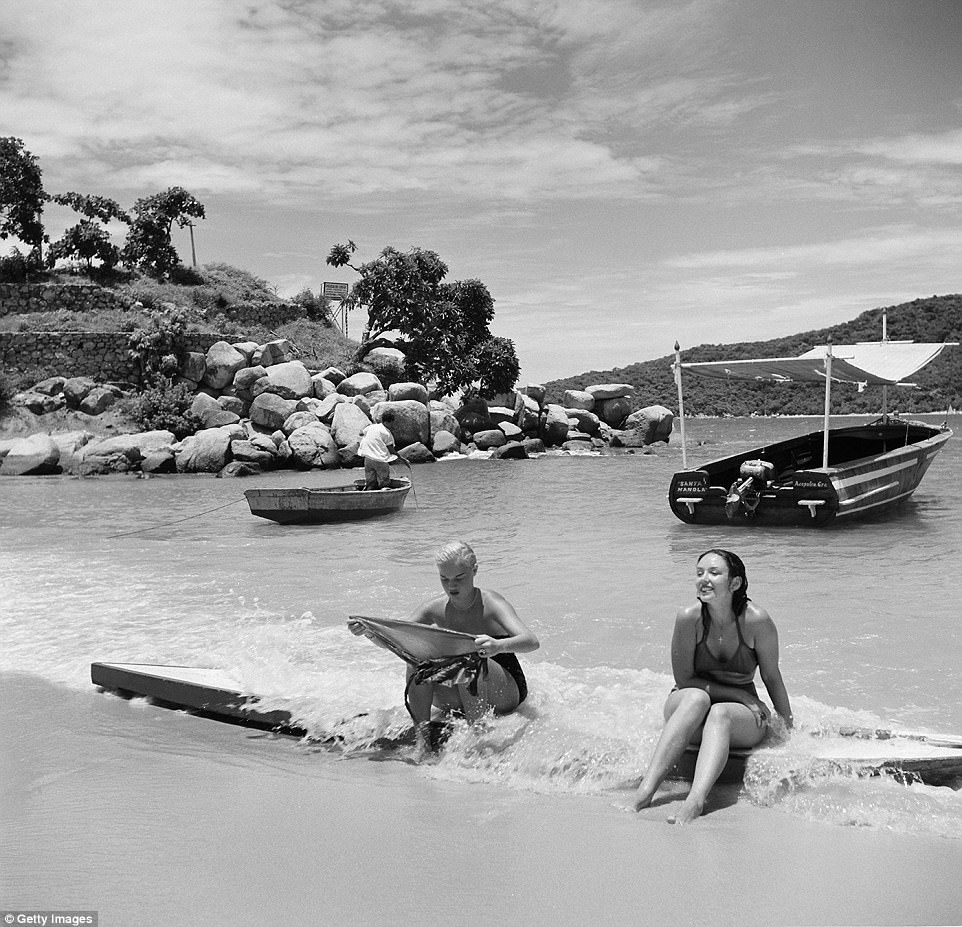 Two women sit in the surf on paddle boards in Acapulco, Mexico, in August of 1952 when the city was a tropical playground

June was the deadliest month in the past two decades with over 2,200 murders.

The dominant drug cartel in Acapulco and the state of Guerrero broke up a decade ago.

The criminals here now don’t have to hide. The operate in 20 or more neighborhood gangs — intermixed with representatives from larger drug cartels who contract them for jobs. 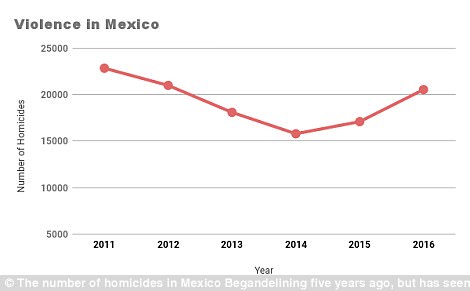 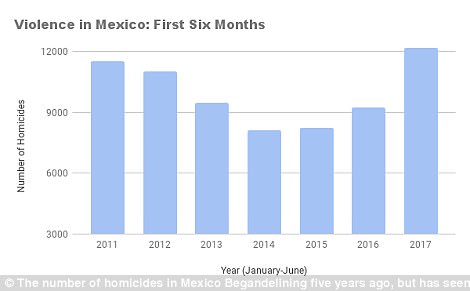 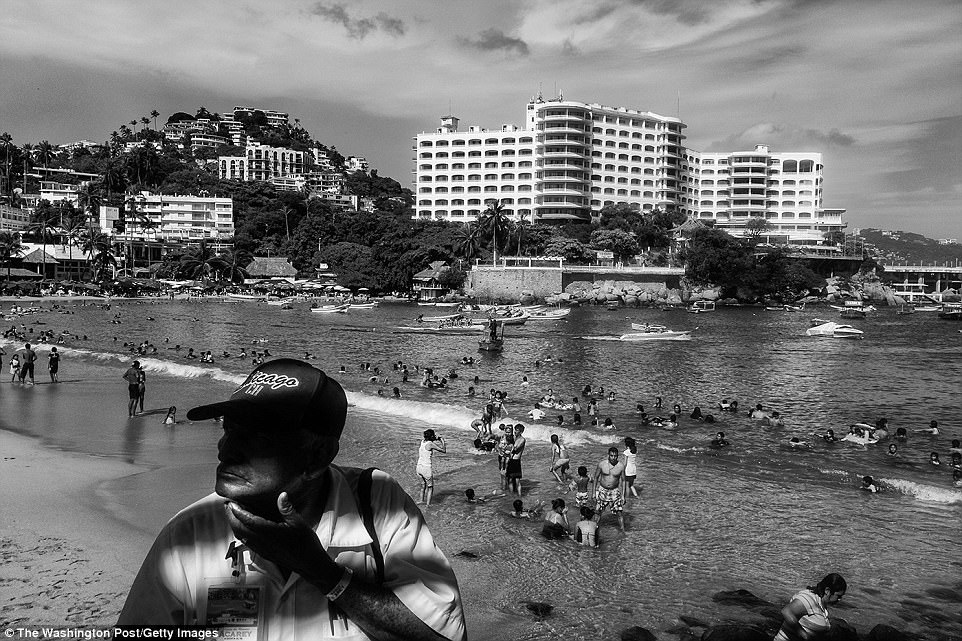 Locals and tourists play on a popular beach called La Caleta, located just minutes away from the city’s crime-riddled Renacimiento neighborhood in July 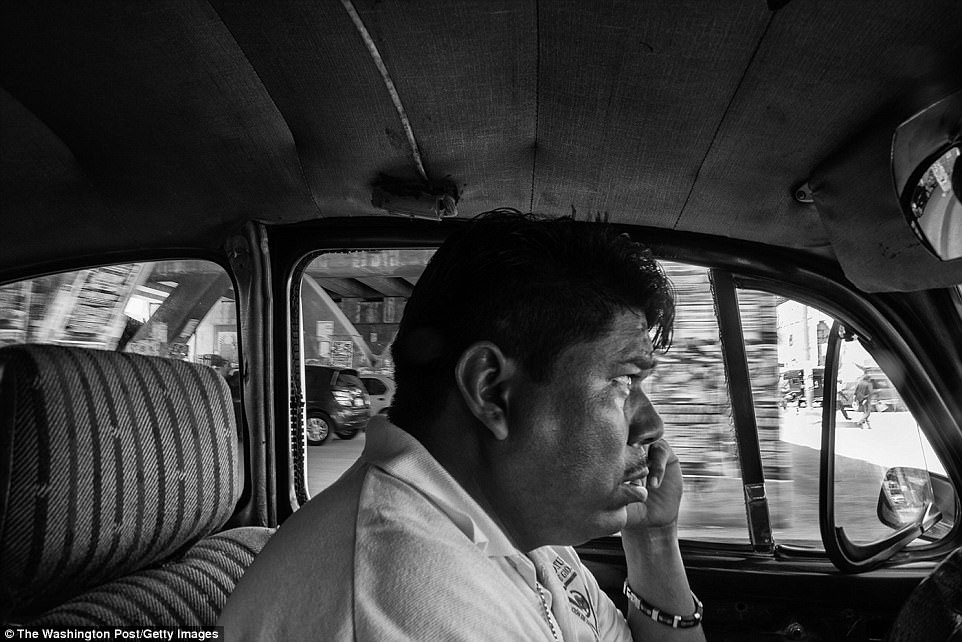 A taxi driver rides through one of the city’s most dangerous neighborhoods. Many taxi drivers are employed by gangs as lookouts, ‘Halcones’ (hawk in Spanish), to inform on who is entering their territories 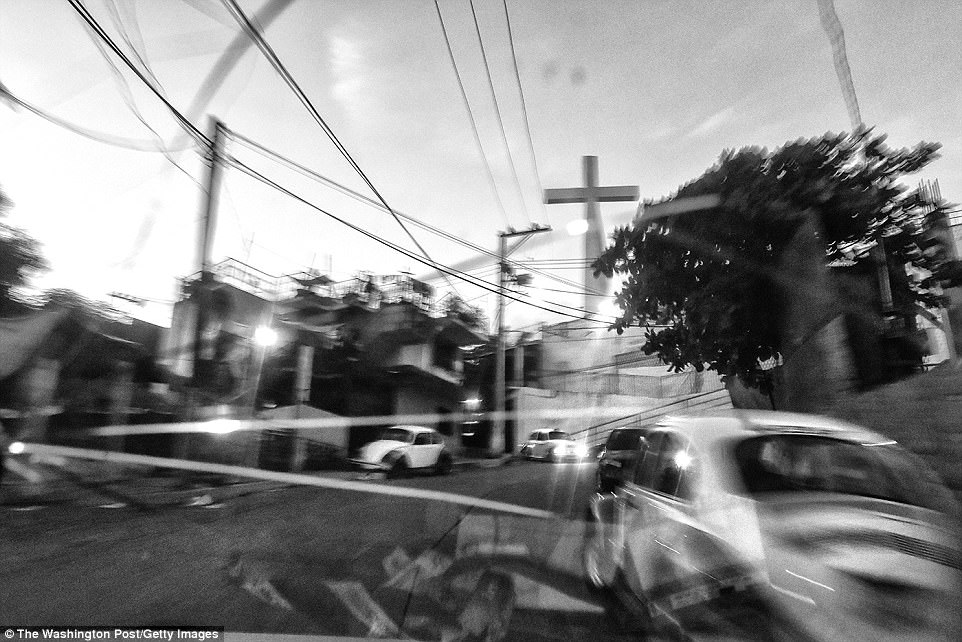 A cross looks over the increasingly violent and dangerous neighborhood of Colonia Santa Cruz in Acapulco, Mexico

A Washington Post article tells of a convenience store in the Renacimiento neighborhood where taxis drivers pay fees to ‘Acapulco’s criminal underworld’.

Many taxi driver are employed by gangs as lookouts to inform on who is entering their territories. They are called ‘Halcones,’ or hawk in Spanish.

These halcones are often the first targets when one group invades another group’s territory.

One photo taken in the Barranca de la Laja neighborhood shows coroners from the city of Acapulco removing a body that had been decapitated and the legs dismembered. It was found buried in the floor of a residence of the chronically violent neighborhood.

Impoverished neighborhoods called colonias are the most violent areas. 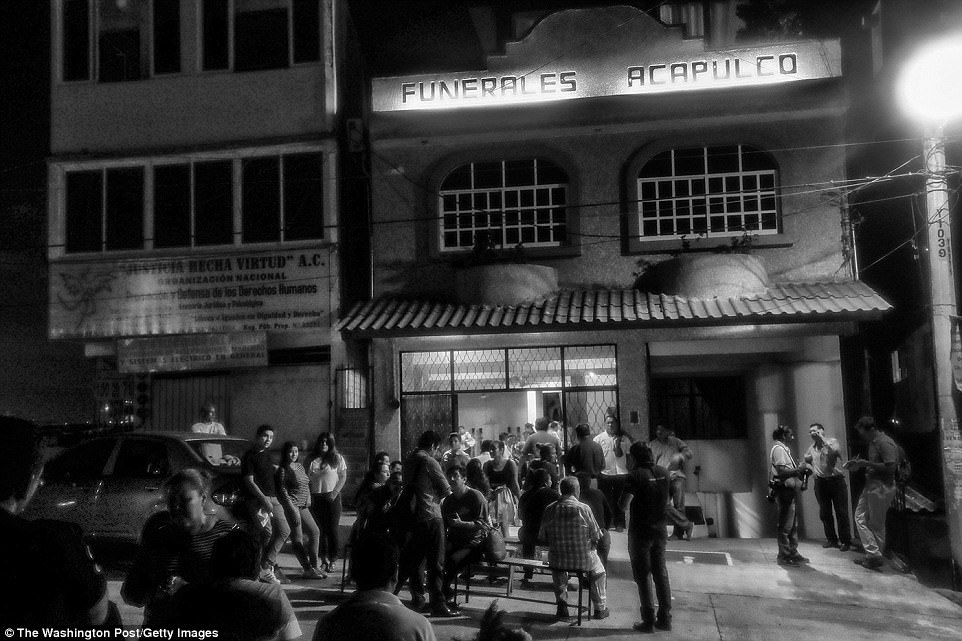 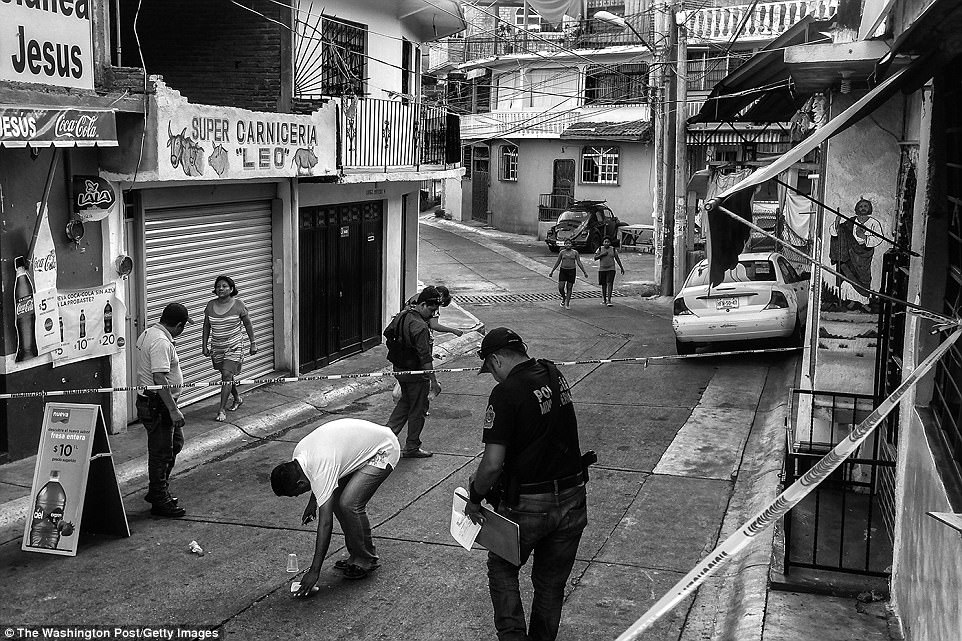 Police look for shell casings at the scene of a homicide in the dangerous neighborhood of Colonia Santa Cruz. While homicides are frequent in the once popular seaside resort city, convictions or arrests are nearly non-existent

Police and military rarely venture into the city’s ‘colonias,’ unless it is to remove bodies. Residents complain that there is rarely even an investigation into the murders of their loved ones.

Homicides are frequent but convictions and arrests are nearly non-existent.

Another photograph shows relatives and friends gathering outside of a funeral home for a wake. It was held for two brothers Pablo Ivan Salgado, 18, and Josue Bernal Flores, 17, who were tortured and murdered during the early morning hours of July 17.

The boys had been found in the trunk of their Nissan Sentra with their great-uncle. They had wires cinched around their necks to the point of suffocation, a type of torture known as the ‘tourniquet.’

A note left with the bodies said: ‘this is what happens to car thieves.’ But the Nissan had belonged to the family. 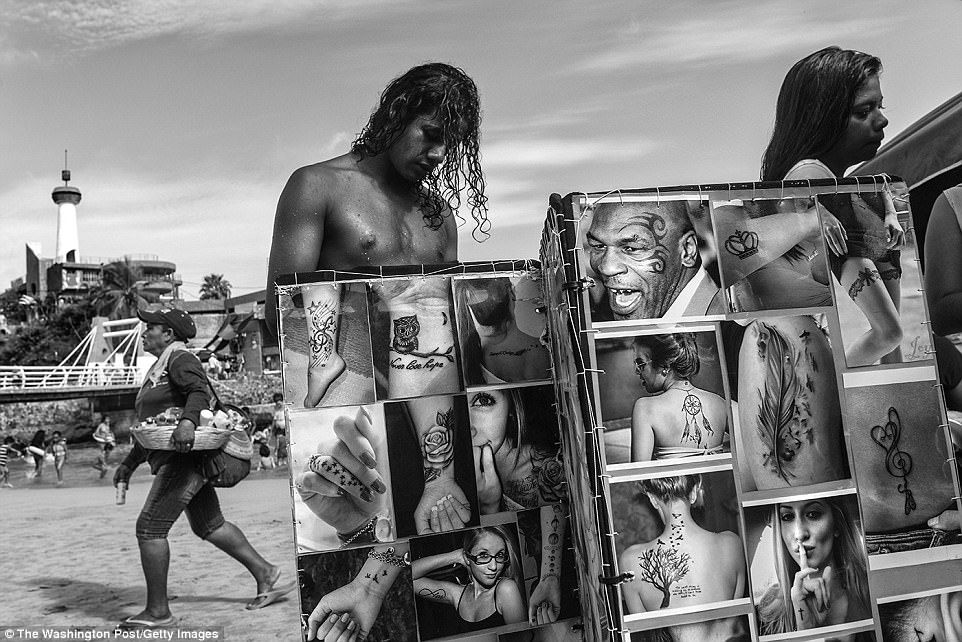 A tattoo artist shows his designs on a beach. The tourist industry in the city is floundering, with hotel vacancies rising with the alarmingly high crime rates. Acapulco was a popular getaway for the rich and famous in the latter half of the 20th century 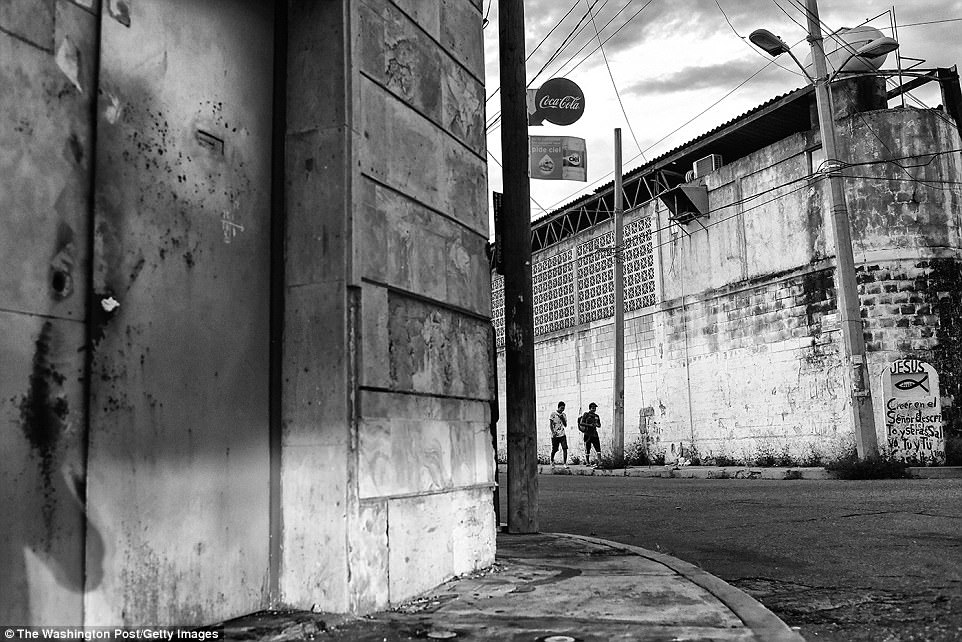 The ‘Zona de Tolerancia,’ or Zone of Tolerance was once a thriving nightclub and red light district. It is now nearly abandoned 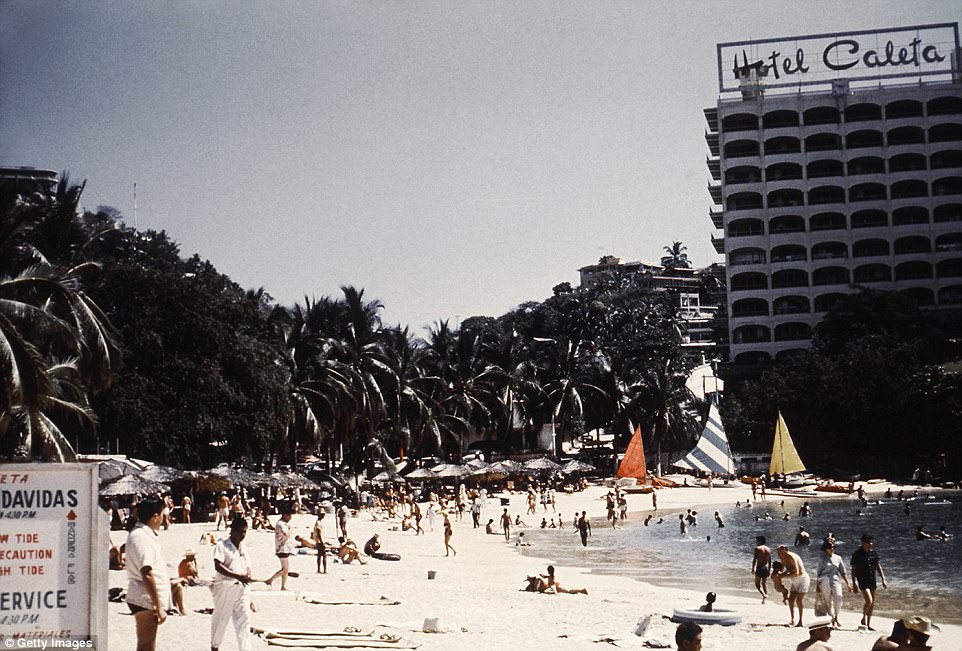 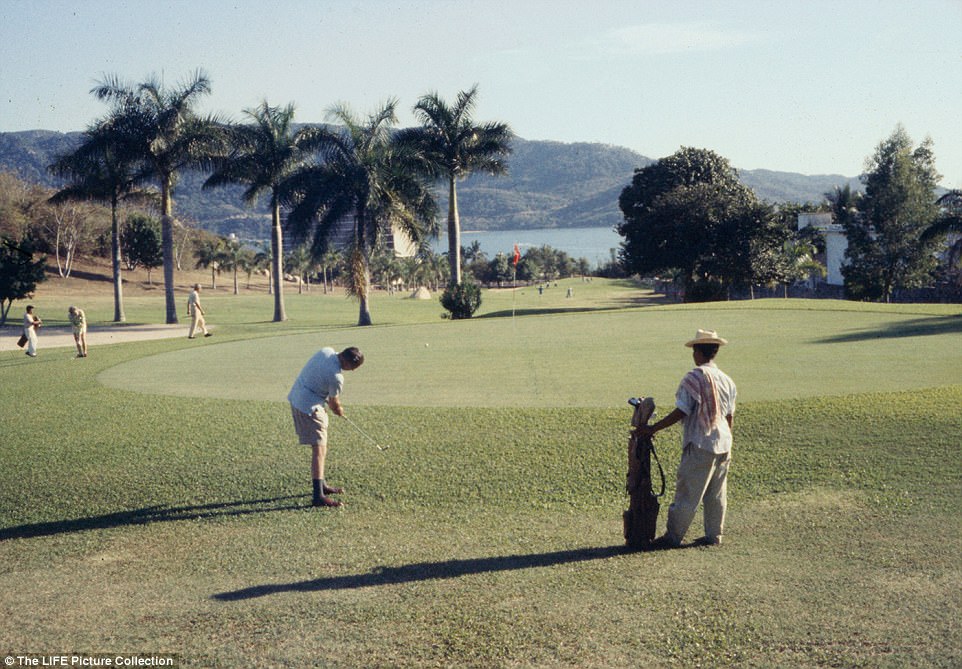 Unidentified golfers are pictured in 1959 on the green at Club de Golf. The club overlooks Acapulco Bay

Numerous local businesses have been abandoned because their owners were powerless to the gangs.

Residents are desperate to move out of their homes when their neighborhoods are taken over by gangs.

Violence in Mexico dropped for two years after the 2012 election of President Enrique Peña Nieto.

It’s been on a steady incline since 2014. One possible reason is competition for domains of kingpins who were captured. Another is the breakdown of secret agreements between criminals and politicians. Also possibly involved, judicial reform requires more evidence to lock up suspected lawbreakers.

One American influence is the country’s increased demand for heroin, meth and synthetic opiates.

This trend is not unique to Acapulco.

In Puebla, south of Mexico City, a fights rage over sales of stolen fuel. 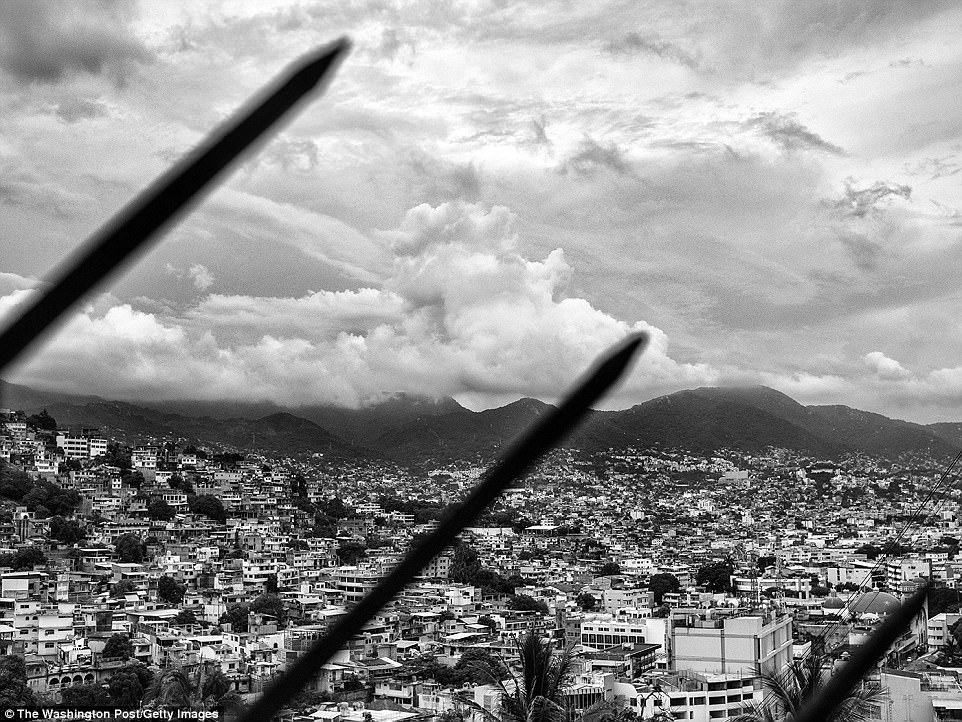 Impoverished neighborhoods called ‘colonias’ are shown through an iron fence. They are the most violent areas of Acapulco, where the police and army rarely venture 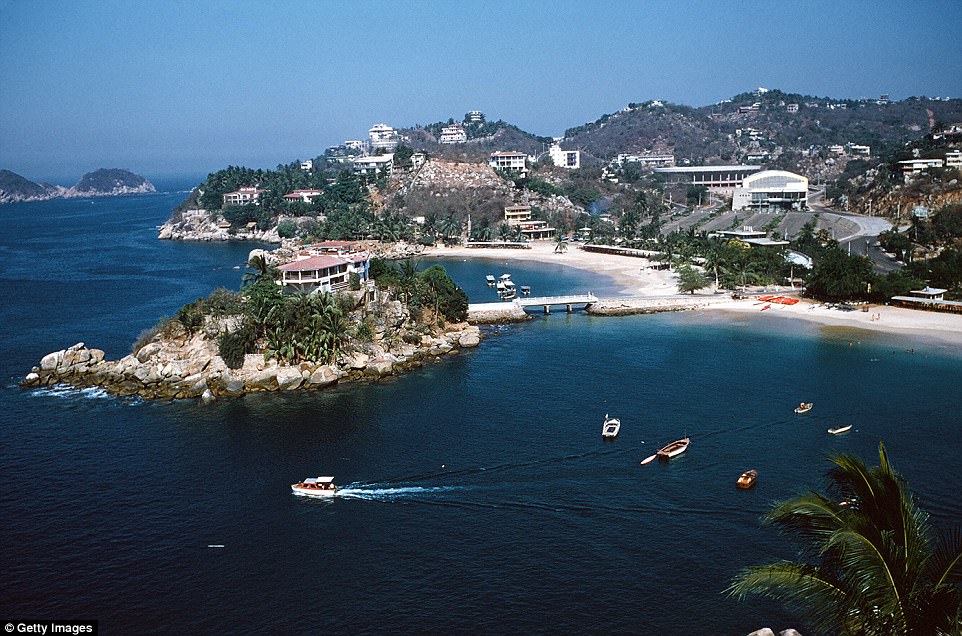 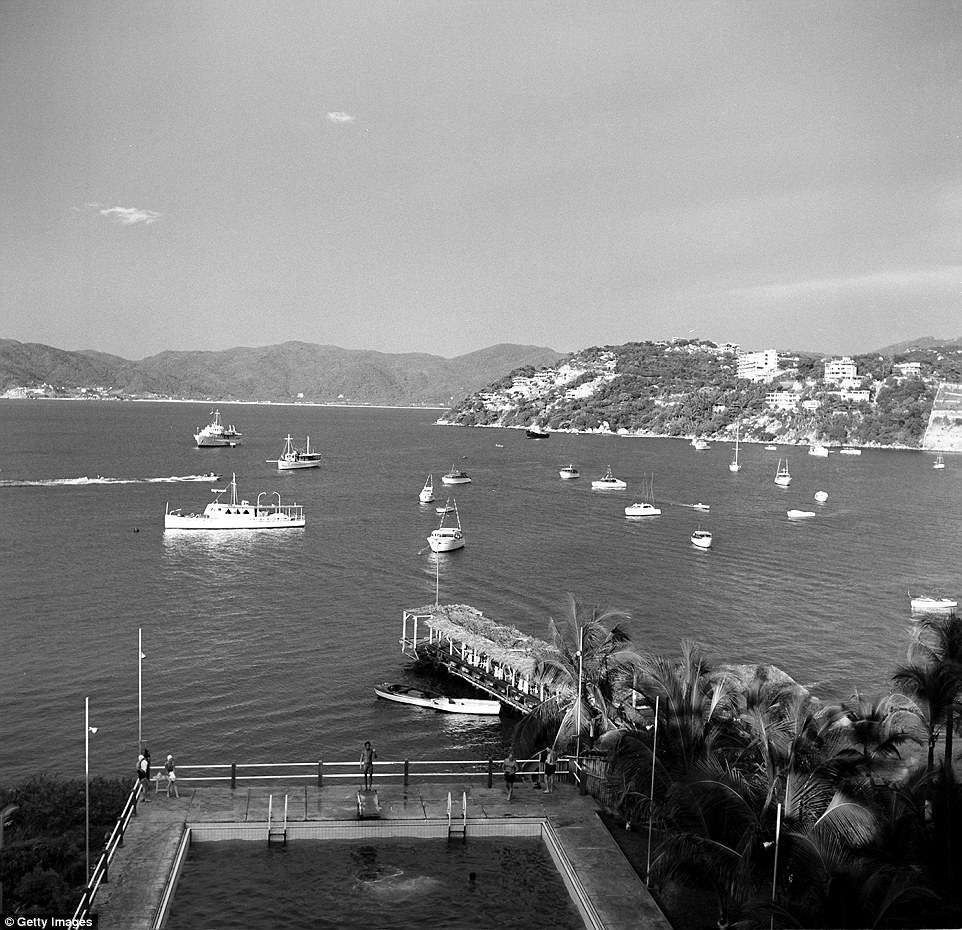 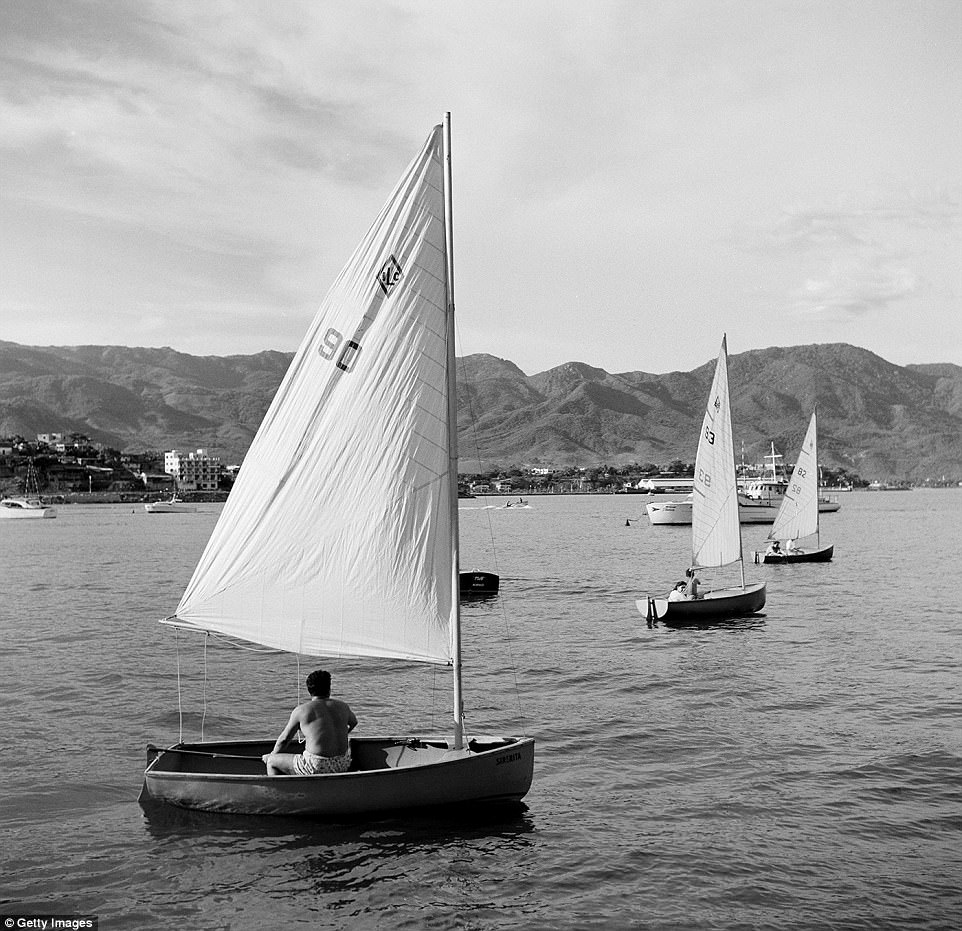 Above a group of tourists sail small boats in the cove in Acapulco, Mexico, in August of 1952