The research identified four sites along Miami Beach where the ground is sinking. Champlain Towers South, top right, was sinking at the slowest rate

The report that detailed that the Champlain Towers South building was sinking before its horrific collapse on Thursday described other areas in Miami Beach where buildings could be at risk of collapse because of land sinking and coastal flooding.

The study revealed that in southwest South Beach, there is significant coastal flooding. It also identified other parts of northeast Miami Beach where the ground has sunk.

The report was done by Shimon Wdowinski, a professor in the Department of Earth and Environment at Florida International University. He studied Miami Beach last year and a coastal town in Virginia to see where coastal flooding might have impacted the ground and caused it to sink.

When Champlain Towers collapsed on Thursday, Wdowinski said it came as no surprise given his research last year.

It’s unclear if he gave any kind of warning to the building operators last year after he carried out his research.

It found that the ground beneath the building has been sinking at a rate of 1.9mm every year since the 1990s.

Another site where the same thing was happening is in the area surrounding Park View Island, near where there is an elementary school.

That patch of land has been sinking faster than the land beneath Champlain Towers South – at 2.3mm a year.

Further south, there are two sites in the Flamingo/Lummus area of South Beach that Wdowinski’s team identified as also sinking at rates of 2.2mm a year and 2mm a year. They are in a residential and commercial district, just to the east of Star Island, the celebrity enclave.

He also found that North Bay Village, an island in between Miami Beach and Miami, was sinking.

In an interview with USA Today on Thursday, Wdowinski said: ‘I looked at it this morning and said ‘Oh my god.’ We did detect that.’

He maintains that land subsidence would not cause a building to collapse and that something else must have contributed to it. 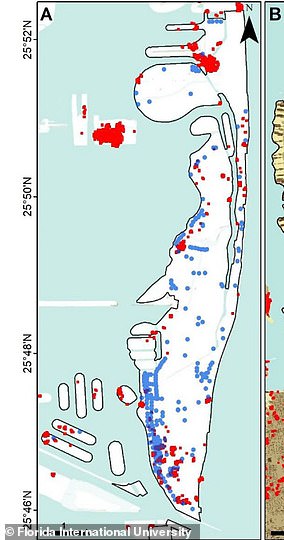 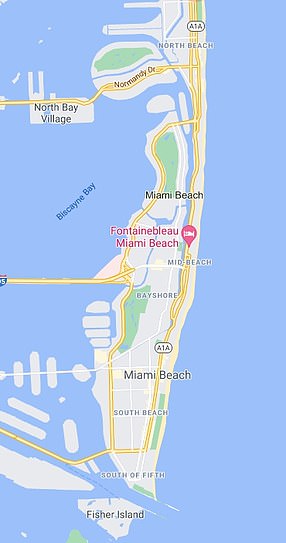 The map shows Miami Beach, left, with locations were there high amounts of land subsidence (in red) and coastal flooding (in blue). It reveals that there are other areas where the ground has subsided at a faster rate than where the Champlain Tower South collapsed 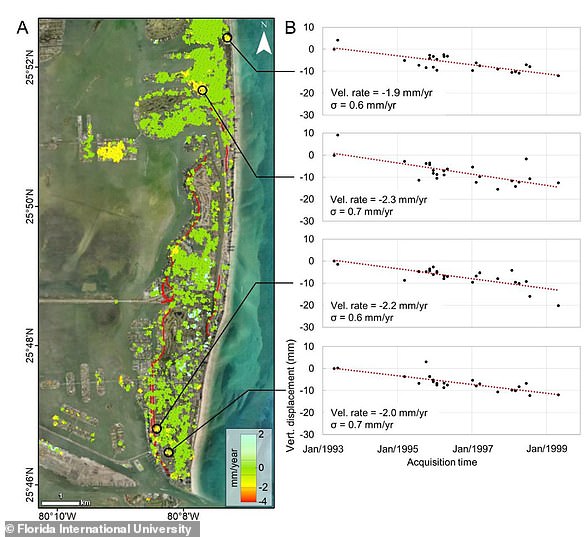 The team analyzed four sites where the ground has been sinking. The top one shows the Champlain Towers site and the others are all parts of land where there are apartment buildings, stores and even one near an elementary school. They were all sinking at a faster rate than the Champlain Towers site. The researchers say this alone shouldn’t cause buildings to collapse so there’s no need for alarm 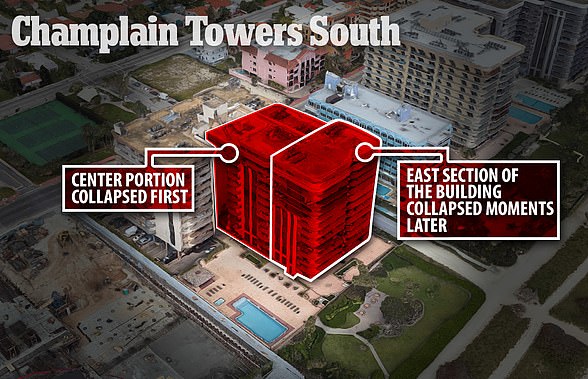 The study found that land sank in locations around Miami Beach at rates between 1 and 3 millimeters per year- mainly in parts of the city built on reclaimed wetlands.

In Norfolk, land subsidence was seen in areas along the shore and inland at similar rates – with some areas showing land sinking at rates up to 8 millimeters per year.

According to the United States Geological Survey, more than 80% of known land subsidence in the U.S. ‘is a consequence of groundwater use and is an often-overlooked environmental consequence’ of land and water-use practices.

‘Land subsidence is a gradual settling or sudden sinking of the Earth’s surface due to removal or displacement of subsurface earth materials,’ according to the agency.

It can occur at different rates and has even been recorded at rates more than 200 millimeters per year in some places around the globe like Jakarta, Indonesia.

Norfolk and Miami Beach were chosen as the locations for the study because both communities have been subjected to repeated coastal flooding over the past decade, the researchers said in the study.

In Norfolk, flooding has occurred in multiple locations throughout the city characterized by low elevation. 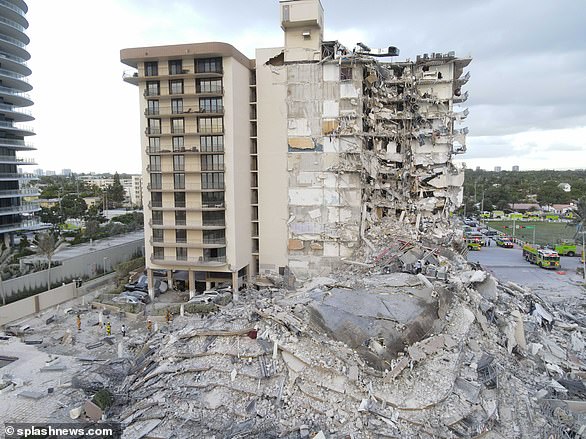 A huge emergency search and rescue operation is underway after the beachfront condo tower, Champlain Towers South, collapsed at about 1.30am this morning in the Miami neighborhood of Surfside. One woman has been confirmed dead and at least eight people were injured 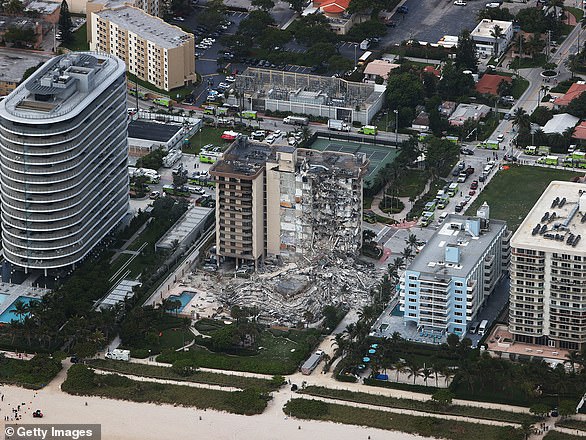 Rescue teams rescued 35 people from the damaged building and two people, including the young boy, were pulled from the rubble in the early stages of the search operation

The results indicate that about 97% of Miami Beach was stable during the observation period but several localized subsiding areas were detected mostly in the western part of the city.

The study noted that most of the subsidence happened at single-family houses that were built on reclaimed wetlands. However, the study also specifically called out the Champlain Towers South condominium.

‘In some locations, as in the eastern part of the city, the detected subsidence is of a 12-story high condominium building,’ the report reads.

However, the study determined that higher subsidence rates up to 3.8 millimeters per year were registered in the artificial islands located west of the city like the Venetian Islands as well as North Bay Village.

Portions of Miami Beach like Mid-Beach and Bayshore as well as La Gorce appeared to show lower levels of subsidence.

‘The rest of the city remained stable,’ the report reads.

Luckily, some of Miami Beach’s tallest buildings, including the 44-floor Green Diamond and Blue Diamond towers, appear to sit in areas with low levels of land subsidence.

The report appears to conclude that the geology of the area, which is made up of a plateau of karst limestone, may contribute to localized subsidence even though no regional subsidence has been recorded in south Florida.

Wdowinski uploaded a video to the Vimeo platform on Thursday explaining the findings of his study and why it had been conducted.

‘For this area of the Atlantic Coast, at the time, there weren’t at the time many observations,’ he said.

He said that the 1 to 3 millimeters per year subsidence is ‘pretty small’ but added ‘when you think about the accumulation over time then it can be a few inches over decades and that was our concern.’

Wdowinski said that InSar has been used to monitor buildings and in many cases where buildings crack and move, they also show subsidence.

‘We’ve seen that in another study that we studied detections of sinkholes in central western Florida, we saw that there were some buildings that moved and when we went to check we saw there were some cracks,’ Wdowinski said.

The researcher said that the InSar technology is commonly used around the world to detect movement of buildings.

‘In most cases, these buildings move and there’s no catastrophic collapse like in the case here in Surfside – which was very unfortunate,’ he said.

‘There was unusual pocket we saw in surfside which was in the eastern side, known to be a stable part of the city,’ he said.

‘Over there, we didn’t expect to see subsidence, so we didn’t pay too much attention to that. We just recorded it because that’s what the data shows.’

He added: ‘We just reported that because the focus of the study was about land subsidence and not about trying to analyze building damage or anything like that. So it’s a byproduct of our analysis that we saw movement and we didn’t pay that much attention and just recorded it in the paper.’ 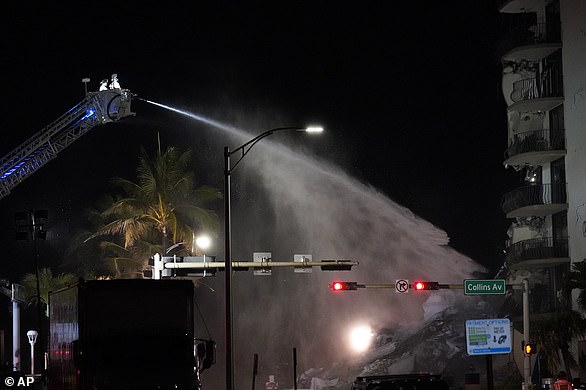 Wdowinski, who has previously conducted a number of land subsidence studies including one in Mexico City, noted in the video on Thursday that the tragic Mexico City Metro overpass collapse on May 3 that killed 26 people and injured 79 others had happened in an area where he had previously detected land subsidence.

He said that the land subsidence seen in Miami Beach occurs in ‘smaller pockets’ about the size of a house than like that he had detected in Mexico City.

‘In some cases, it can be just that the building is not built properly and it can have cracks because of the problem of the building itself and it still moves – and we can detect it with this technology.’

In Miami Beach, the city is built on a barrier island that has a rockier foundation on the eastern side. The western side was made of wetlands that were reclaimed before houses were built on the reclaimed wetlands – which tends to subside in a process called soil consolidation.

‘In the eastern side of the city where the buildings are built on bedrock, it’s less likely to have movement of the building and the ground beneath the building – which is why we didn’t expect to see any movement,’ he said.

‘The building can move due to the land or can be due to cracks within the buildings and hundreds of buildings have cracks and they move … and it doesn’t mean it will collapse.’

He said there was ‘something from an engineering point of view that caused it to collapse’ and that it could have been from the ground moving or cracks that had formed in the building in the 1990s.