Tagovailoa has not played since leaving the field on a stretcher after suffering a concussion against Cinicnnati on September 29 but will mark his return against the Steelers this week.

He returned to practice last week and was cleared from concussion protocol Saturday but did not play during the Dolphins defeat to the Minnesota Vikings in Week 6.

Dolphins coach McDaniel said Tagovailoa’s return will be a boost as the quarterback is a ‘strong fabric’ of the team.

‘He’s a captain. He’s a captain for a reason, and as I’ve told you guys from the onset, I think he’s a very, very good player at that position,’ McDaniel said.

‘So very good players, they definitely give people a boost – not because of what other people aren’t but more just because he is who he is. So he’s a strong fabric of this team, and that’s exciting when you get to go play with one of your brothers, which is why the team will be excited, and it will be exciting.’ 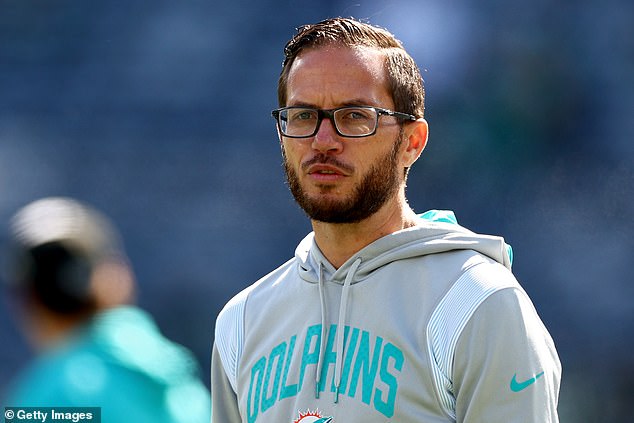 Tagovailoa was stretchered off the field with a concussion against the Bengals in Week 4 following a hit by Cincinnati nose tackle Josh Tupou, just days after he was allowed to re-enter the game against the Buffalo Bills, despite having been analyzed for a possible head injury.

He took a hit from Bills linebacker Matt Milano in the first half, causing his head to slam off the turf. He appeared disoriented afterward and stumbled as he tried to get to his feet.

He passed the examination for concussion at halftime against the Bills and the team and the quarterback later clarified that a back injury had caused a stumble. 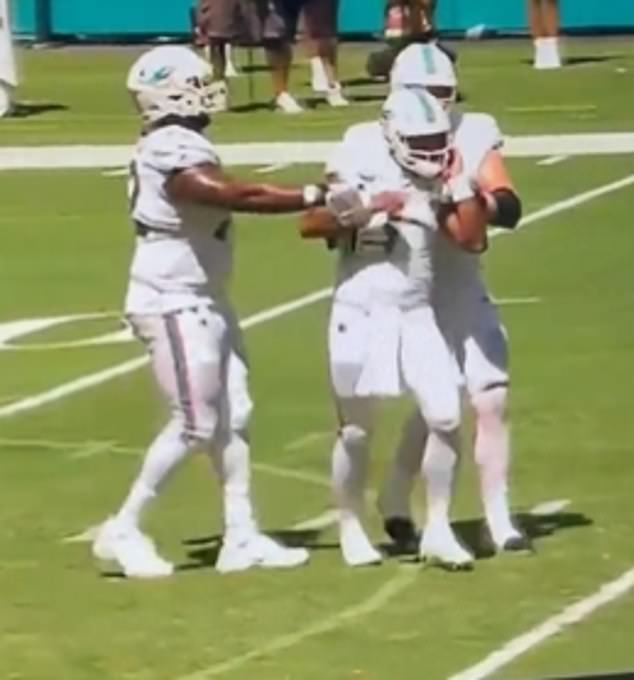 Tagovailoa was cleared to return on September 25, despite stumbling to the ground and continuing to struggle even after getting back on his feet. Teammates needed to help keep the 24-year-old Hawaiian upright before he was removed from the game moments before halftime 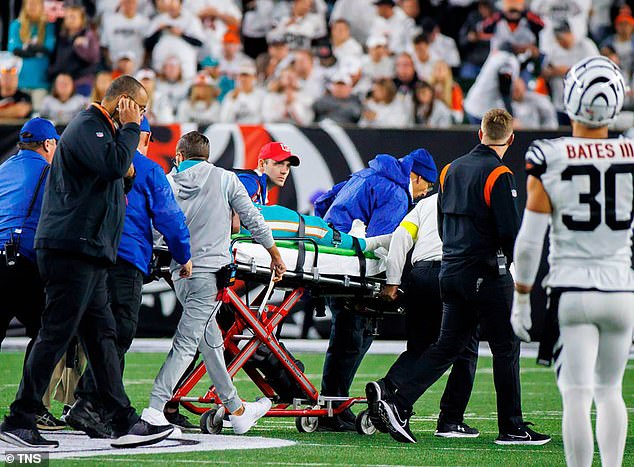 The Miami Dolphins quarterback is transported by a medical team after being sacked by Cincinnati Bengals defensive tackle Josh Tupou during the second quarter at Paycor Stadium on September 29, 2022, in Cincinnati

McDaniel revealed that he has spoken with Tagovailoa about finding the balance between fighting to keep a play alive and learning when to accept that a given play is not going to work.

‘There’s risks in this game and you’ve got to be able to control the controllables,’ McDaniel said.

‘One thing for him is you love his competitive nature, but there is a time in a play where you have to kind of concede, and that’s where he’s kind of been focusing on because it’s something that’s not natural to him. He wants to break every tackle, and he doesn’t like when plays don’t work. Well, sometimes they won’t.

‘So that’s something that he’s mindful of, and I think that that’s a consistency of all the really great quarterbacks that you think of, the guys that you look up to, the guys that kind of set forth the example of how to play the position, they do find ways to be available. 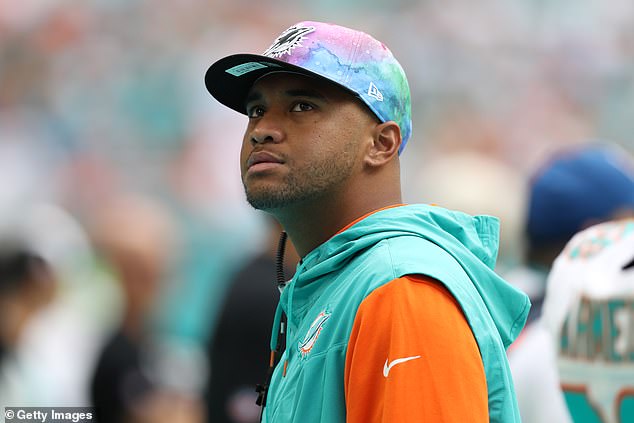 ‘And part of that is that concession, but that is — all things considered, that’s probably a good problem to have in terms of a competitor. You just need to be able to understand your importance to the team and how sometimes the best play you can make is a throwaway.’

Miami’s offense has been dented in Tagovailoa’s absence with the Dolphins losing their last two games.

They suffered another blow at the weekend as backup quarterbacks Teddy Bridgewater and Skylar Thompson were both forced out of their lone starts due to concussion protocol and a thumb injury. 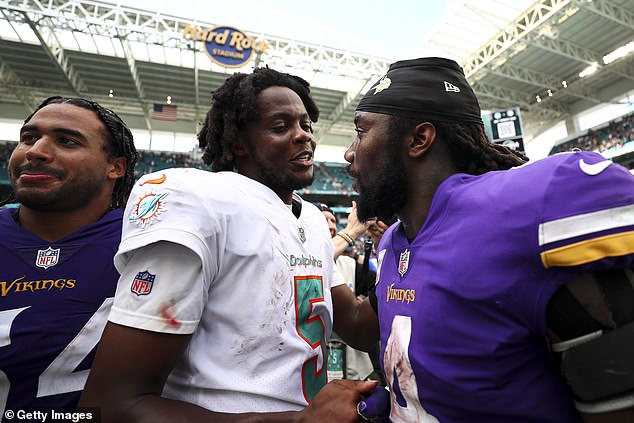 Thompson, who started for the first time in an NFL game this weekend, injured his right hand after striking a Vikings defender’s helmet while throwing an attempted pass in the second quarter. He was treated before going back to the locker room and only returned to the field in the third quarter to watch the team from the sidelines.

The 25-year-old, seventh-round pick from Kansas State was putting on a decent display on Sunday afternoon, completing more than half of his passes (7/13) for 89 yards before being subbed off.

McDaniel told reporters in his postgame comments that he would have ‘definitely stayed with’ Thompson but was reluctant to do so after noticing that his quarterback ‘didn’t have any strength holding the ball.’

Back-up option Teddy Bridgewater, who exited last week’s game against the Jets in the first quarter due to concussion protocol, came on with the score favoring the Vikings 10-3 before halftime and finished the game with 23 completed passes out of 34 for 329 yards, two touchdowns and two interceptions. 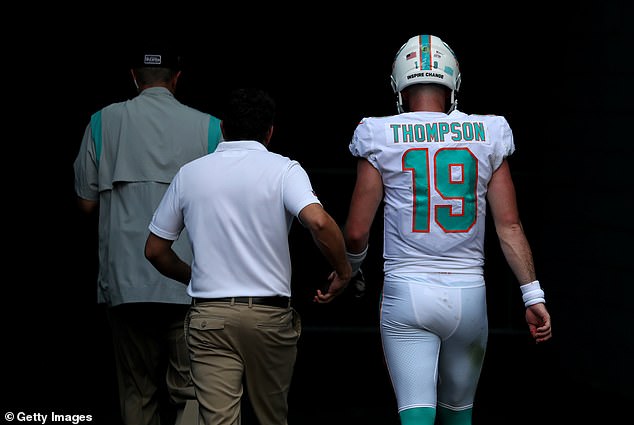 Third-string, rookie QB Skylar Thompson injured his hand in Q2 against the Vikings on Sunday

It was third game in a row in which the designated starting quarterback for the Dolphins did not manage to last an entire game. Tua Tagovailoa suffered a concussion against the Bills in Week 4 before Bridgewater’s head injury last week in Week 5.

As a result, Miami’s season has been going downhill after a stellar start with three consecutive wins against the Patriots, Ravens and Bills. McDaniel, however, said it would be too easy to blame the team’s recent shortcomings on injured players.

‘You can look at it as a reason for X, Y or Z — I challenge the guys not to,’ he said in his postgame comments on Sunday. ‘We have a lot of faith in all the players that we have on this team, and the quarterbacks that we’ve been working with since last April, any one of them we have high expectations to go execute and succeed. 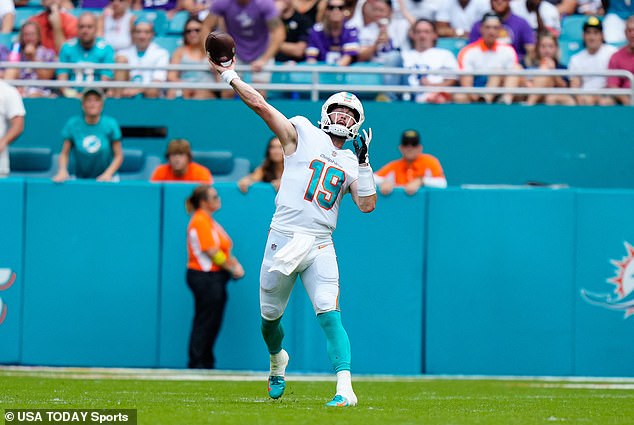 Thompson, 25, was making his first NFL start since being drafted as this year’s seventh pick

‘Now, of course it’s not ideal. You want the guys that get all the reps during the week to play, but you always know that that’s a possibility.’

‘I’m going to demand that the team does not point at that to be a reason for what’s happened or a reason for the loss,’ the first-year head coach further said.