Michael Clarke caused a stir in November after he was spotted relaxing on Anthony Bell’s luxury $10 million superyacht with his bikini-clad assistant, Sasha Armstrong.

But on Saturday, it was a family affair for the Clarke clan as Michael, wife Kyly, and their two-year-old daughter Kelsey Lee were seen leaving Anthony’s yacht after some quality family time on the vessel.

The pair appeared to be in mummy and daddy mode as they tended to Kelsey and collected the last of their belongings before leaving.

Family day out: Michael and Kyly Clarke put on a loved-up display as they left Anthony Bell’s luxury yacht with their daughter Kelsey Lee on Saturday 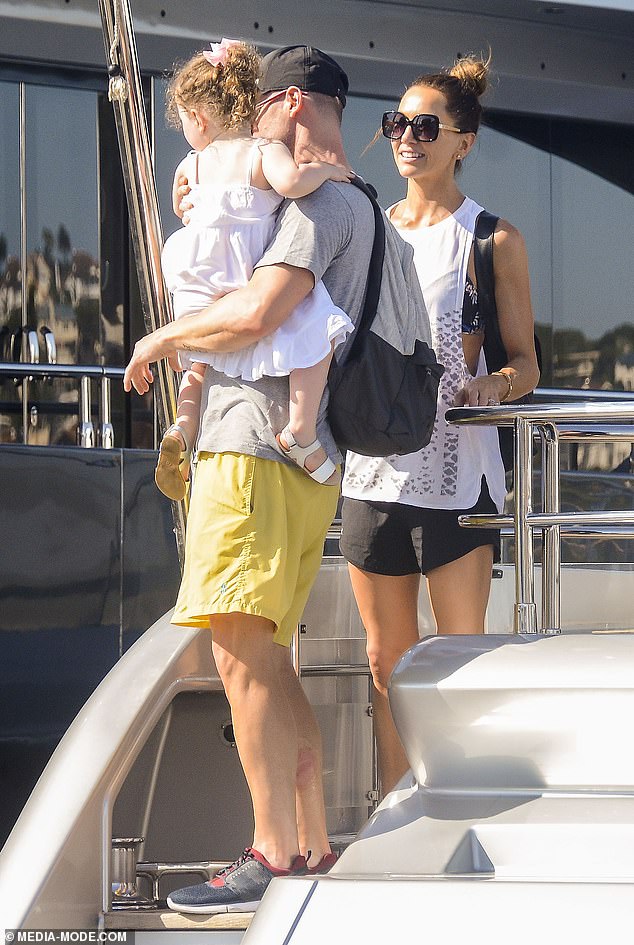 Perfect parents! The pair appeared to be in mummy and daddy mode as they tended to Kelsey and collected the last of their belongings before leaving

Proving herself to be a gracious guest, Kyly gave the yacht’s captain a friendly kiss goodbye before leaving.

The 37-year-old showed off her slender frame in a pair of sporty gym shorts and a tank top.

She was also wearing runners on her feet and had her brunette locks tied up in a bun, indicating that she may have just worked out. 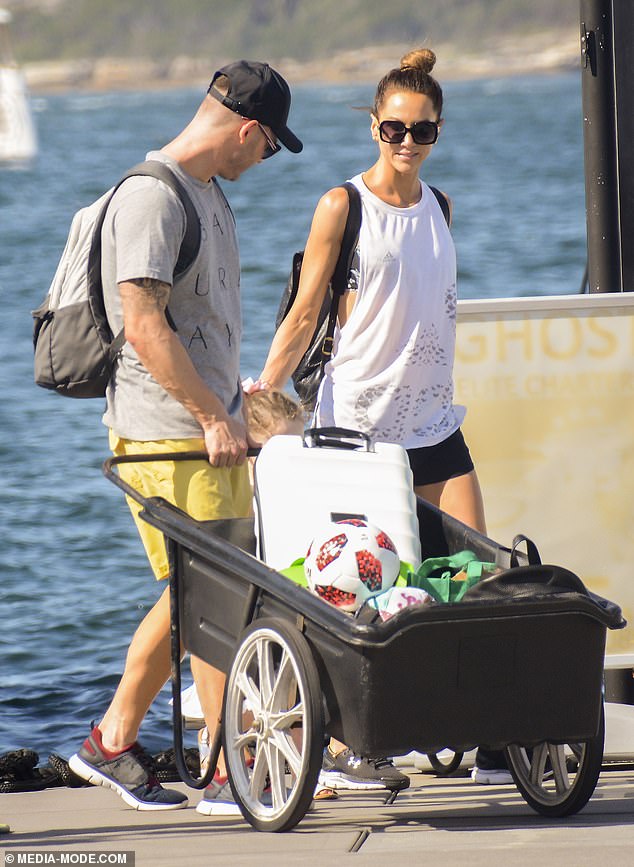 That’s handy! The couple placed their belongings in a trolley, which they wheeled themselves instead of leaving it up to an assistant 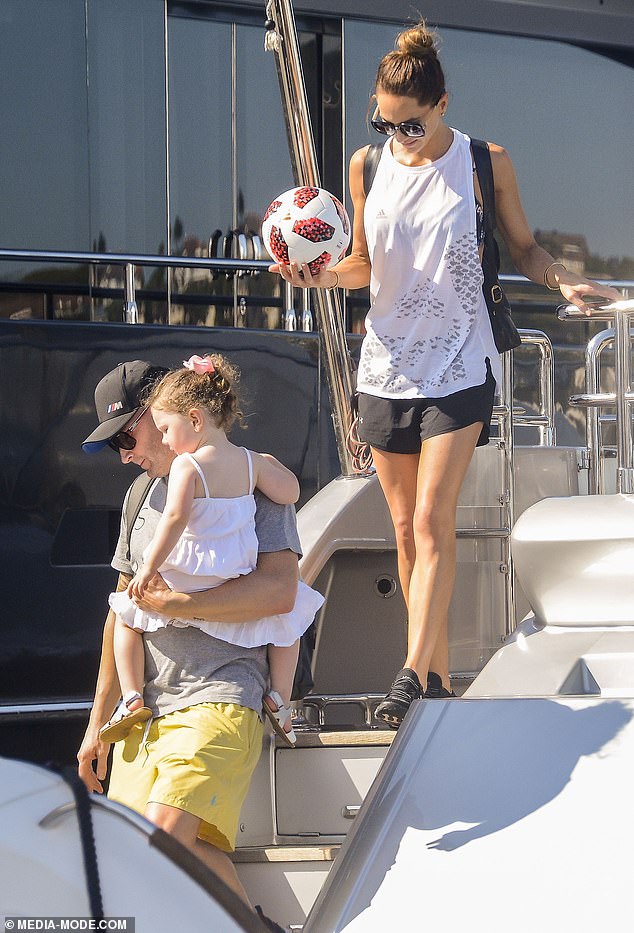 Trim pins: Kyly, who is known for her dedication to fitness, showcased her trim pins 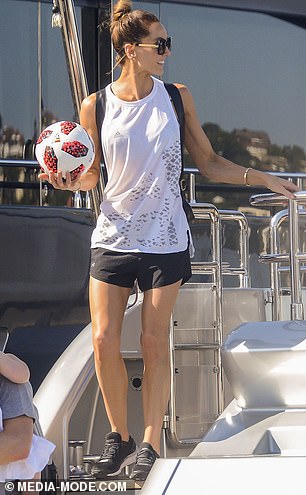 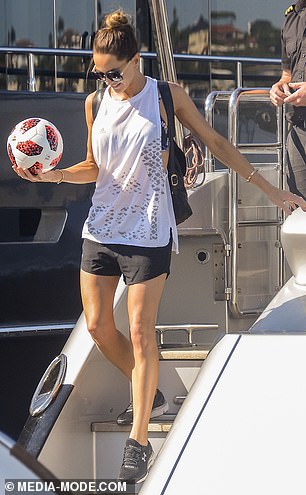 Baller! The brunette bombshell balanced a soccer ball in one hand as she trotted down the stairs 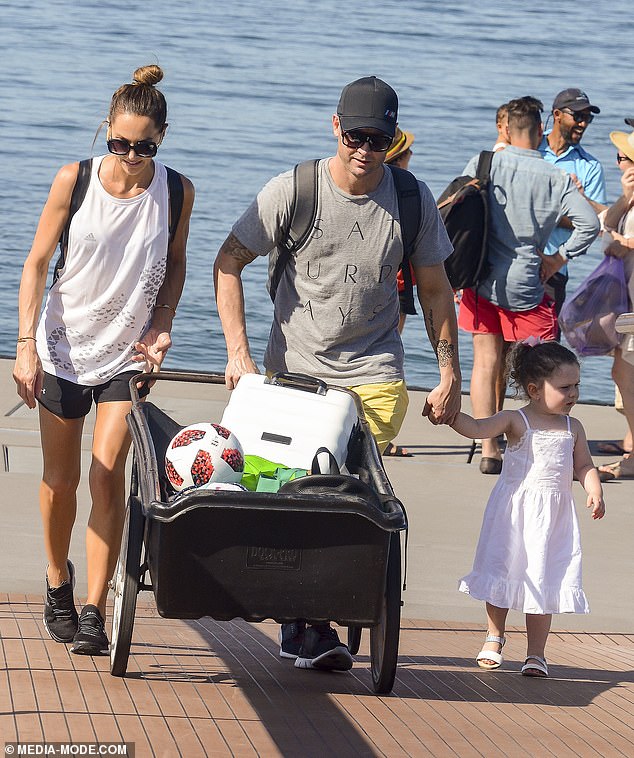 He can do it all! Michael held onto Kelsey with one hand while wheeling the trolley with the other

Michael was also wearing trainers, along with a loose pair of shorts and a T-shirt.

The couple have recently been the subject of split rumours.

But on Friday, Kyly put speculation to rest at the Australian premiere of Charlie and the Chocolate Factory in Sydney.

Speaking to Daily Mail Australia at the event, Kyly defiantly said: ‘We’re not, never were and never will be splitting.’ 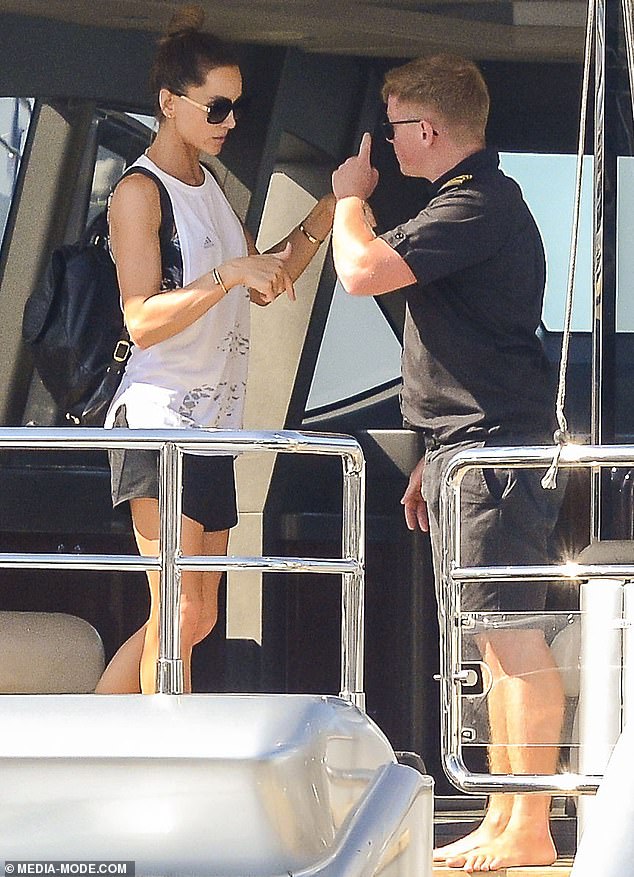 ‘Have we got everything?’ Kyly, 37, had one last chat with the captain before leaving 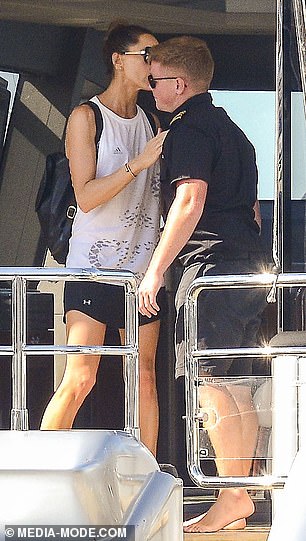 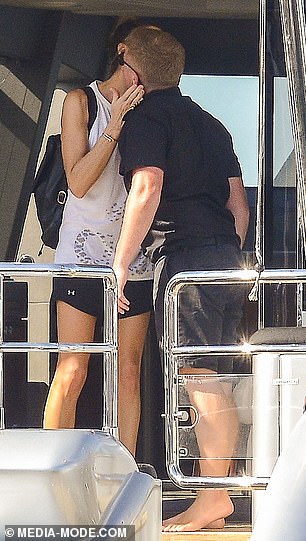 Friendly: Proving herself to be a gracious guest, Kyly gave the yacht’s captain a friendly kiss goodbye before leaving 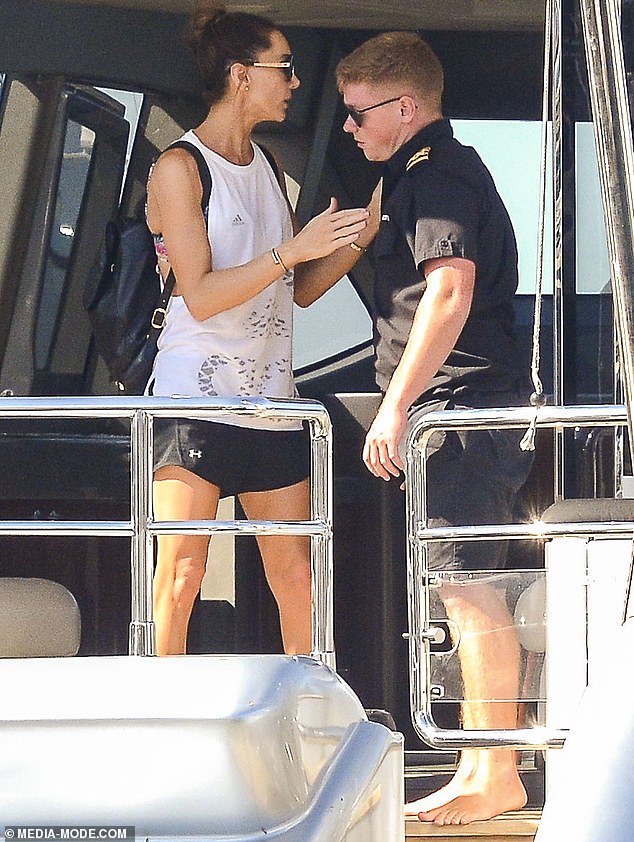 Slim and trim: The 37-year-old showed off her slender frame in a pair of sporty gym shorts and a tank top

The mother-of-one added that the key to a happy marriage is to keep up regular date nights.

‘Have those date nights so you’re always keeping everything nice and fresh,’ she added. 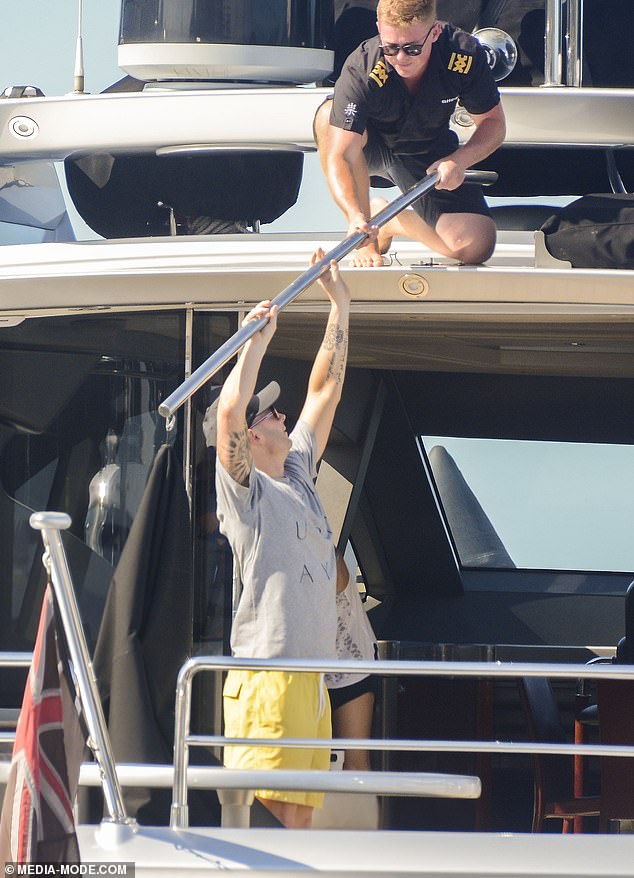 What’s that for? The yacht’s captain handed Michael a pole, which the cricketer gripped with two hands 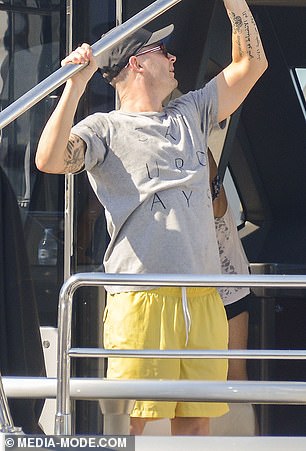 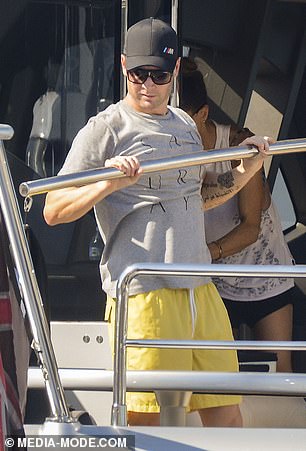 Careful! The 37-year-old took the utmost care whilst retrieving the metal rod 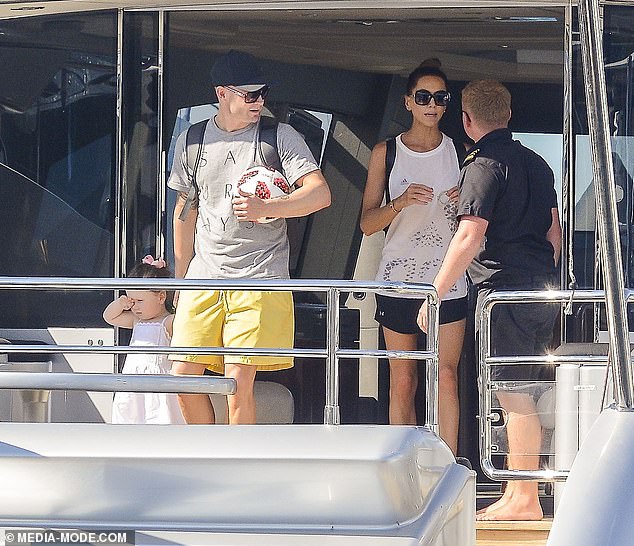 Big weekend? Little Kelsey Lee rubbed her eyes as her parents said goodbye to the captain 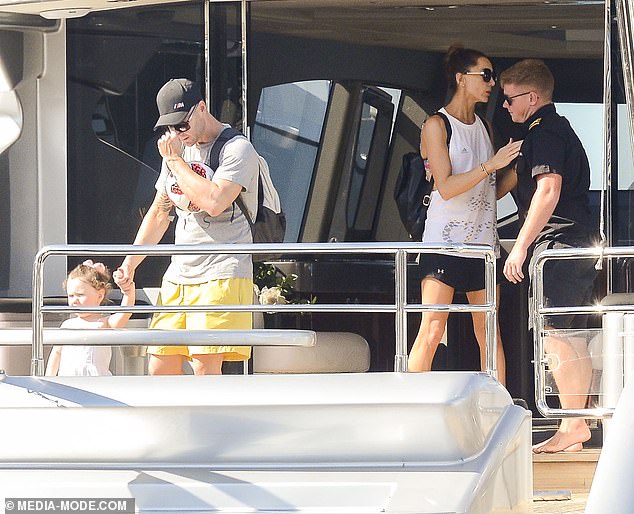 ‘Hurry up!’ Kyly continued to chat to the captain as Michael and Kelsey Lee made their exit

In November, Michael made headlines when he and his bikini-clad assistant, Sasha Armstrong, were spotted on Sydney Harbour aboard Anthony Bell’s superyacht, Ghost.

The pair enjoyed swimming in the ocean and engaged in a long conversation as they relaxed in the sun.

A ‘source’ reportedly told Woman’s Day in November, that Kyly was ‘furious’ after seeing photos of her husband Michael on a luxury yacht with his blonde assistant. 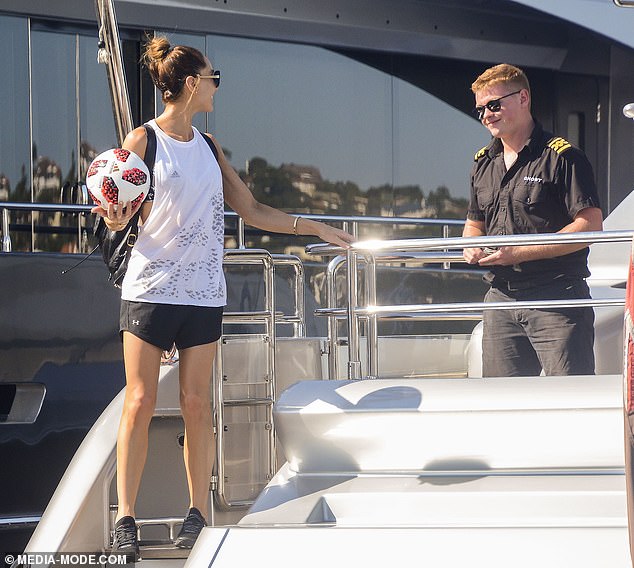 One last look: Kyly flashed a warm smile at the captain before making her final exit 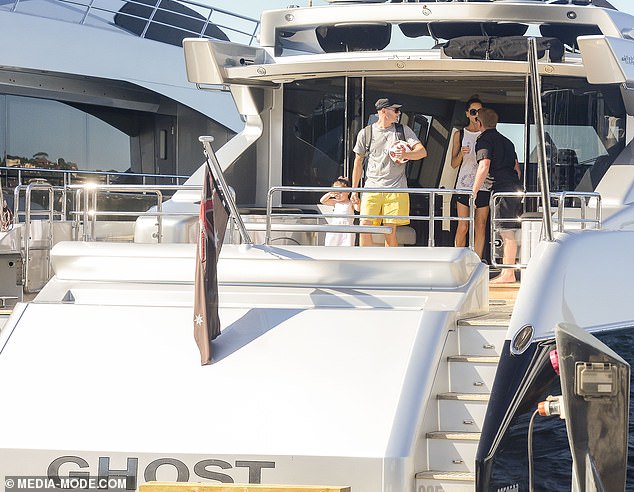 ‘Of course she’s annoyed by the images. What woman wouldn’t be?’ a cricket ‘insider’ told the magazine at the time.

The insider added: ‘They have a very unorthodox relationship for a business situation.’

Kyly and Michael tied the knot in 2012 and welcomed their daughter Kelsey-Lee in November 2015. 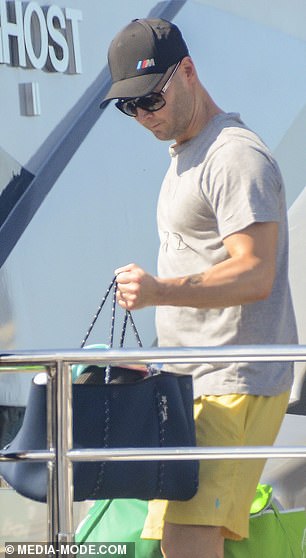 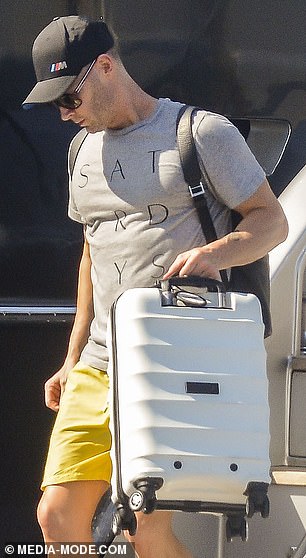 Gentleman: Proving himself to be a classic gentleman, Michael dutifully carried the large and cumbersome items off the ship